Posted on January 11, 2018 by Katrina Demeanour 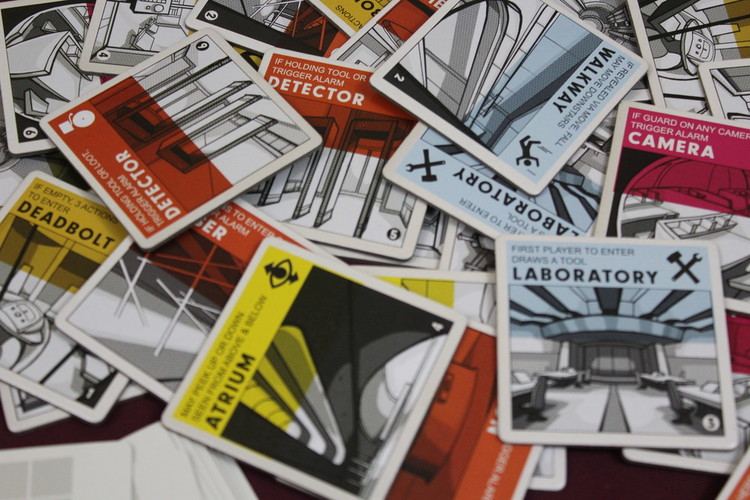 The Burgle Bros are an elite team of burglars that pull off impossible heists. Together, you will play as the Burgle Bros crew trying to pull off the heist of the century. All while avoiding guards, alarms, and pitfalls you must crack three safes on different floors of the building and escape to the rooftop without a single member of the crew getting caught.

Burgle Bros is a co-operative game for 1-4 players that comes with the following all in a very cool looking box! 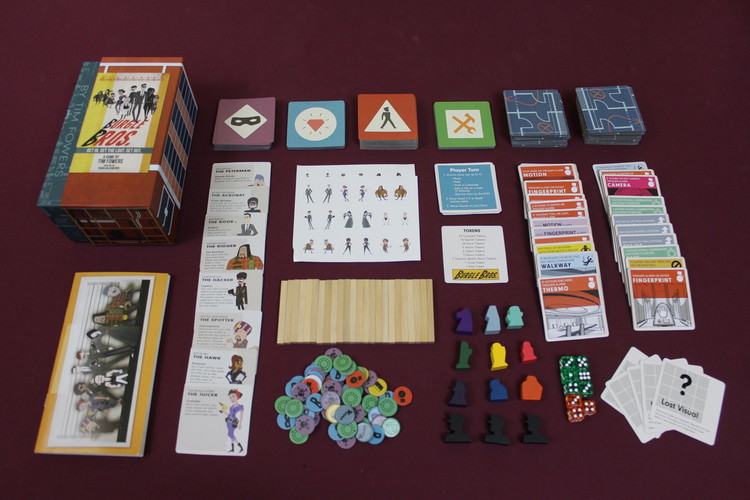 That’s a lot of stuff packed neatly into a small box! There are various scenarios in the rulebook, but I’d definitely advice starting with one of the more basic ones - this game is tough! I’ll be referencing ‘The Bank Job’ here which is the standard set up for the game.

Set aside the three safe tiles and the three stairs tiles. Shuffle all the other tiles and separate them into three stacks of fourteen, add one safe and one stairs tile to each pile and shuffle again. Each pile of tiles represents one floor of the building, lay each out in a four by four grid, face-down and place the walls as shown in the book or below. When tiles have a wall between them, they are not considered adjacent. 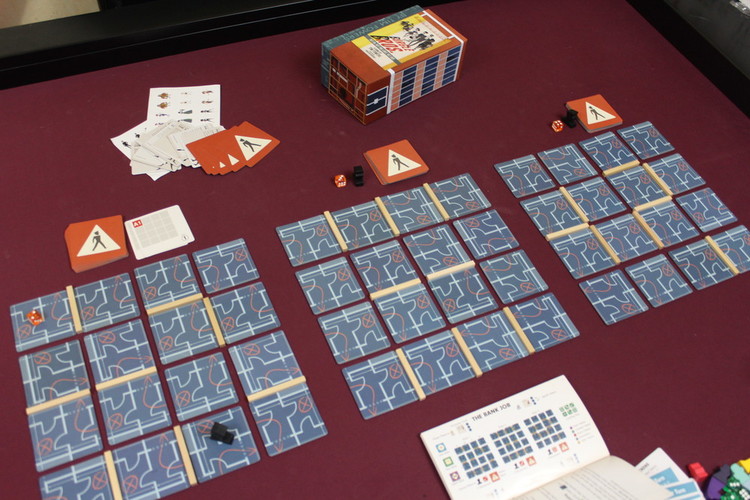 Sort the patrol cards into three decks by their floor, indicated in the bottom right of the cards. Shuffle them up and place a guard token next to each one. Then put a guard dice next to each one, this represents the guards' movements on each of the floors. Floor one should show 2, floor two should show three and floor three should show four. Reveal the top card of the first floor patrol deck and place the guard on that starting position, then reveal the second card and place the dice on it, this will be the guards first destination.

Each player randomly picks a character card. These are double sided with one side marked for Advanced Skill. Each player takes the meeple for their character and three stealth tokens. These represent your ability to hide from guards. If at any point you need to discard one of these and you have none, your group has lost the game!

Choose any tile on the first floor for your team to enter the building. Flip over that tile and place a downstairs token on it to mark it as your entrance. Starting on this tile does not trigger any tile effects, those will start happening though as soon as you move.

On each turn: Take up to four actions, check for events if applicable, move the guard located on your current floor.

Peek at a tile - Turn over an adjacent tile, remember tiles blocked by walls don’t count! You don’t move onto the tile, but you also don’t trip any of the alarms.

Move to a tile - Go on, be brave! Just move straight onto the tile, flip it over and check for effects. Some tiles have requirements for moving into them or may trigger an alarm. If you move into a tile that the guard is on, you must discard a stealth token. If you move onto a floor that does not yet have a guard, set it up like you did for the first floor. If you trigger an alarm, place an alarm token on it and move the orange guard die to that spot. 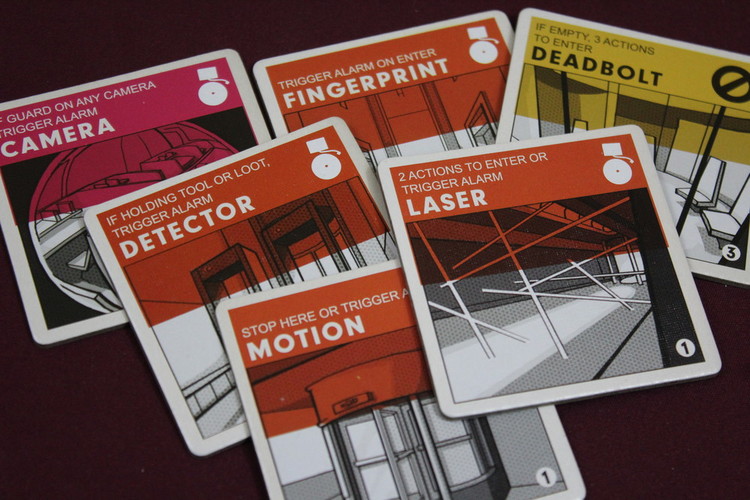 Hack a computer - Place a hack token on a computer tile, upto a maximum of six. When any player triggers an alarm, they may choose to discard a hack token of the appropriate type (laser, fingerprint or motion) to cancel the alarm. They will cancel alarms on any floor and you don’t need a player in the computer tile to use them.

Add a die to a safe - Place a die on the safe tile you are in. This costs two actions. Each safe can have upto six die on them.

Crack a safe - Before you can crack a safe, you must discover the combination. Reveal all six tiles in the same row and column of the safe (either by peeking or moving into them). Each tile has a number in the bottom right - these numbers form the combination you will need. Roll all the dice that have been added to the safe tile you are in. If the number of any of the dice matches, place a cracked token over that number on the appropriate tile. It is possible for one die to match multiple tiles. You successfully crack the safe if all six numbers have a cracked token on them. Then, draw a tool card from the deck, draw a loot card from the deck and finally, add one to the movement of each guard on your current floor and any below you. Show this by rotating the orange guard dice to show their new movement. If you did not finish cracking the safe, place all the dice back on the safe tile, you can re-roll them with a later action.

If you used two or fewer actions in your turn, you must draw an event card and follow it’s text immediately. Some events are helpful (and have saved our skin multiple times!) but others may cause trouble. 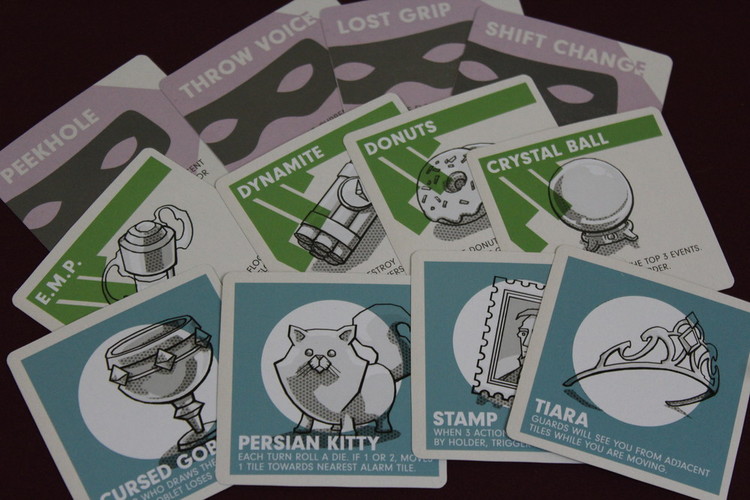 At the end of each players turn, you must move the guard that is on your current floor. If the guard moves into a space with a player, they must discard a stealth token. The guards movement is shown on the orange dice for that floor and the guard will move that many tiles in this phase. If any alarms are active, the guards movement speed is increased by one for each active alarm. Movement is determined at the start of the phase, so any alarms deactivated during the movement don’t change his speed. The guards destination is always the tile that contains the guard die. The original destination is set by the patrol card last revealed, but alarms will move the guard die. The guard always takes the shortest route to his destination, if multiple routes are the same distance. He will take the path most clockwise. When he arrives at his destination, reveal the top card of the patrol deck and if he has remaining movement start him towards the new location. If at any point you should draw from the patrol deck and it is empty, shuffle that floors discard pile to form a new deck and rotate the orange guard die to permanently increase that guards movement by one. 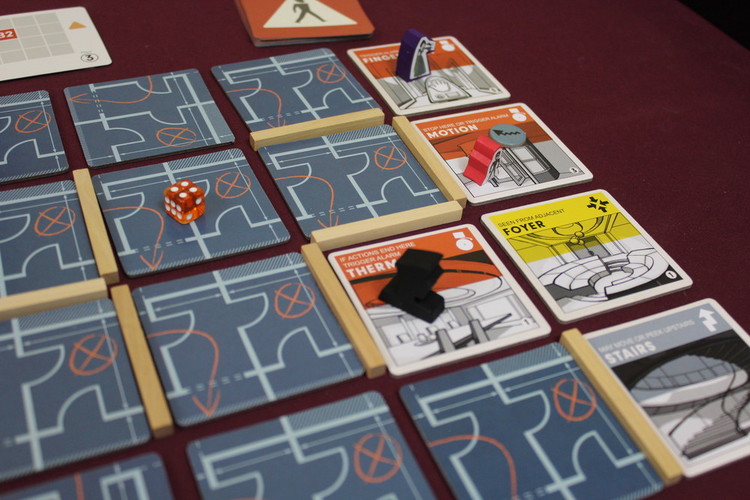 Once you have cracked all the safes, you can move from the top floors stairs onto the roof and are safe. When all players have escaped, you have successfully completed the heist and have won!

You lose when you need to discard a stealth token and don’t have any to lose. You are arrested by the guards, give up the rest of the Burgle Bros and your team loses. 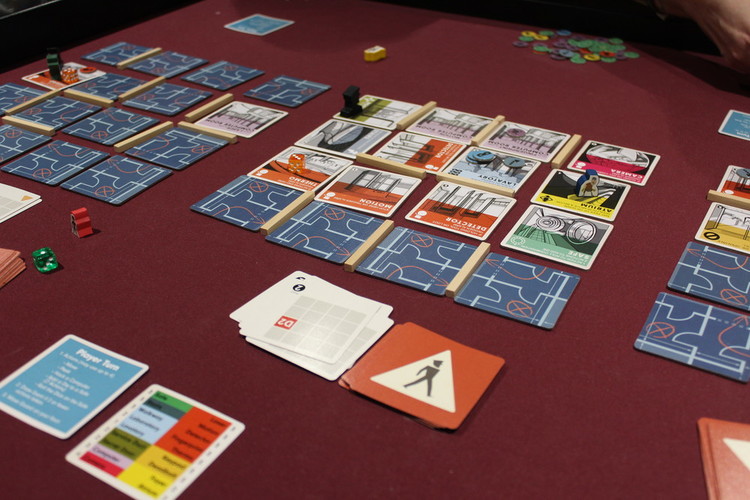 There are a few things that immediately jump out at you when you look at Burgle Bros, most of which result from the quality of the game. The theme is great and lends itself well to the game, the presentation, the artwork, the components are all of superb quality. Burgle Bros was initially funded on Kickstarter and is now self-published by Fowers Games, meaning the quality has remained consistent through all print runs.

Although we completed the game on our first run, we had plenty of nerve wracking moments and literally breathed a sigh of relief in our last turns as we ran for the exit! Sometimes an event card just managed to save us. However, we haven’t won a game since then. Often co-operatives suffer from being over easy or over tough, this balances nicely in the middle. It also truly carries a sense of fear when those guards start heading in your direction. So far, we have only played the basic ‘Bank Job’ set up though there are multiple additional set ups contained within the rule book along with tips on how to create your own variations. Thematically speaking, everything works beautifully, your great loot that you have just scored will quite often act against you, weighing you down or drawing attention to you (that shiny tiara sparkles in the light!) This game lends itself brilliantly to the co-op genre and every game has resulted in a lot of group planning and forward thinking, really bringing the players together to beat the game.

If you are considering a bank heist in the near future, consider this good training!