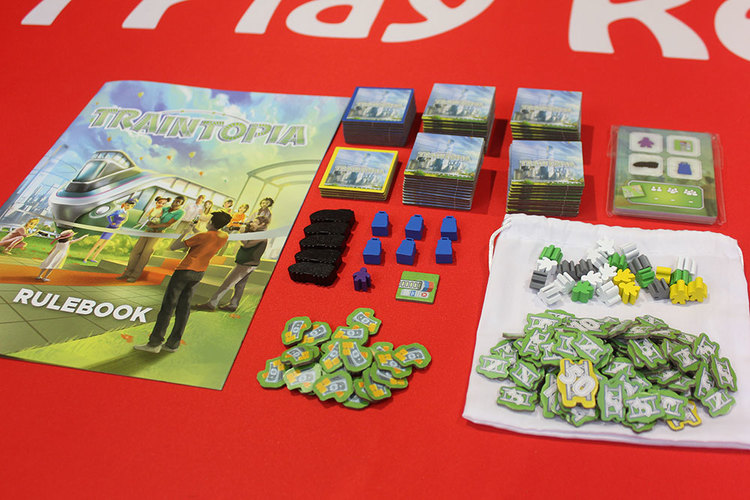 We love a good train game here and Traintopia certainly fits that category! Train games can vary wildly in complexity but Traintopia is a great family game that has us puzzling over our moves at times. Build routes for tourists, commuters and goods, building up your routes to become the best rail network.

Shuffle the basic map tiles and place them in a few piles. Place all bonus tiles face-up so all players can see and access them. Shuffle the round cards and create a deck depending on the number of players - if playing with three players use all nine cards, if two or four players use only eight cards (pop the remaining card back in the box)

Place the End Game bonus card on the table with the appropriate bonuses on the card - the railhead tile, railway inspector, a train, and a mailbag. 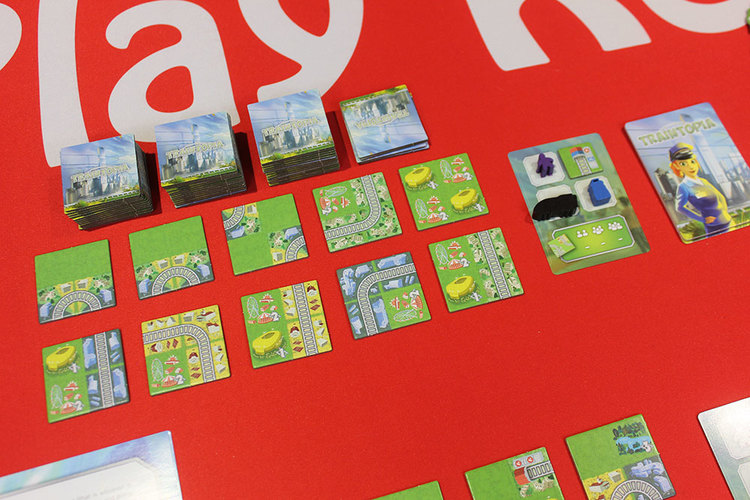 Shuffle all objective cards and deal one to each player, these are kept secret. Take the appropriate number of player aids for the number of players, making sure to include the one with the conductor symbol on. Deal these out to all players, whoever has the conductor card will be the first player. Place all the commuters in the cotton bag and give it to that player. Place the tourists, trains, mail bags, money, and victory point tokens to the side ready to be used when needed.

Give each player a random starting tile which they should place face up in front of them - this is the start of their rail network so make sure there is plenty of room around it!

Reveal map tiles equal to twice the player count ie. four tiles for two players, six tiles for three players. Starting with the last player, everyone should pick one of these tiles. Once everyone has taken a tile, begin with the start player and everyone takes a second tile. Add these tiles to your network according to the following rules: 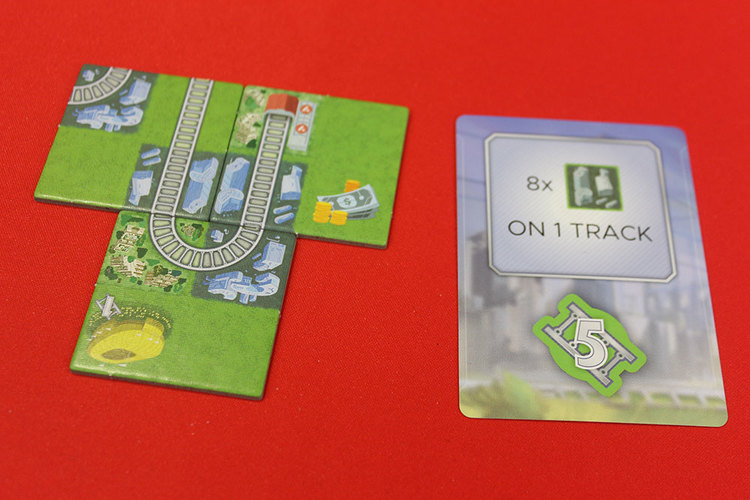 Each round consists of three phases: Preparation, Draft, Clean Up

The starting player should draw the top round card from the deck and place it face up so all players can see it.

First place all wooden elements as shown on the card - tourists, trains, mailbags and commuters (which are drawn randomly from the bag) Then, check the bottom of the card and draw a number of tiles as indicated by the player count, place these face-up. 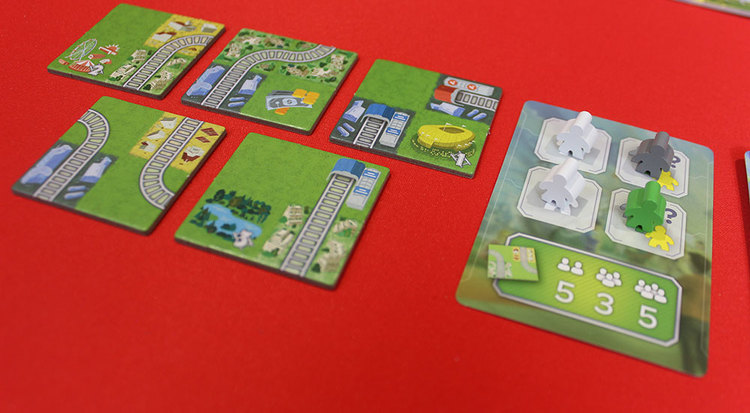 Starting with the first player and going clockwise around the table, players take it in turns to draft. Choosing one tile or wooden element at a time, play continues until there is only one item left. This remaining item is placed back into the game box (be it a tile or a wooden element)

When you draft a wooden element you must immediately place it on your tracks. Each track may only ever have one tourist and one commuter of each colour on it. You score points immediately as you place these guys.

When you place a tourist, you score the points shown on any landmarks adjacent to the line that the tourist is on. These may be on the same tile or on neighbouring tiles and may be next to the track vertically, horizontally, or diagonally. Take the corresponding number of victory point tokens.

When you place a commuter, trace the track from start to finish and count the number of adjacent districts that match the colour of the commuter, score one point for each (even diagonals!) and take the appropriate number of victory point tokens. Mixed districts count as all colours.

Mailbags and trains are added to your tracks, again, you may only have one of each on a track and will score you points at the end of the game. 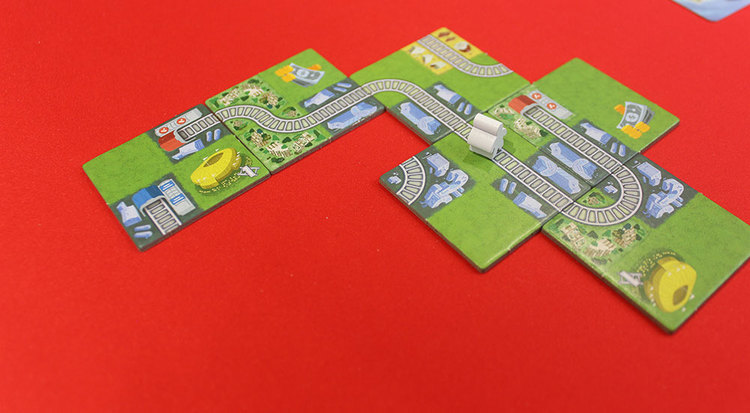 At any point, you may discard your drafted element and exchange it for one victory point.

If there are any cards left in the round deck, pass the bag to the next player, they will start next round, if there are no round cards left, you will need to resolve the end game bonus card and score! 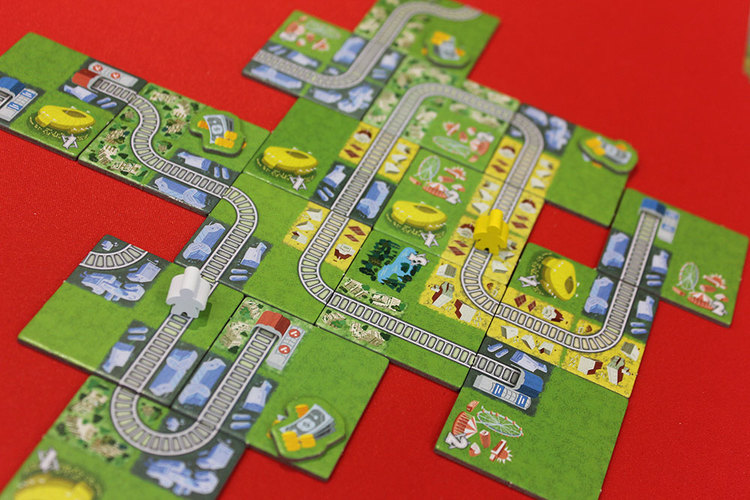 This is when you get to place the tiles you drafted previously.

Place your tiles according to the rules. Whenever you place a tile showing a money symbol, place a money token on it. At any time during your turn, you may spend money tokens. There are three things you can do with them:

Change a commuter colour - when you place a new commuter you can decide it will score a different colour. So, you could place a grey commuter but score for your green districts

You may do any of these actions once in a turn and if you have enough cash, you may even do all three in one turn!

When you discard the last round card, the game is finished and end game scoring happens. Start with the bonus card resolution.

Starting with the player on the fewest points, each player gets to choose one end game bonus.

The Railhead - this acts as a special station that can be added to any track.

The Railway Inspector - add it to any track and select a colour, it scores like a commuter of that colour.

Mailbag and Train - work like the others in final scoring.

Score your hidden objective if you have completed it.

Score all finished tracks. A track is considered finished when both ends have a station. Count the number of tiles in the track and score according to the chart shown on your player aid.

A mailbag doubles the score of any finished track.

Tracks with trains on them score for the number of money tokens left adjacent to the track, again, there is a chart on the player aid.

Add up the scores to see who has won.

Now, I have to admit with things as they are currently we have only played this at two player, which does mean the draft choice isn’t as good as it would be with more players, but the choices can still be tough and definitely had us scratching our heads at points. Overall, Traintopia feels like a combination of Carcassonne and Ticket to Ride, both of which I’d consider great lighter-weight games. I loved seeing a lady conductor and the artwork is all super friendly and easy to understand. My one criticism of the game was that the trains didn’t seem that important - in a game about building rail networks. A lot of the time we were using our cash for the extra actions (those bonus tiles are really great!) so the trains aren’t generally high scoring in our games, which, thematically seems a bit odd!

Overall this is a great light weight game with enough decisions to keep all players engaged. I'm looking forward to playing this with more players as soon as we have a chance! 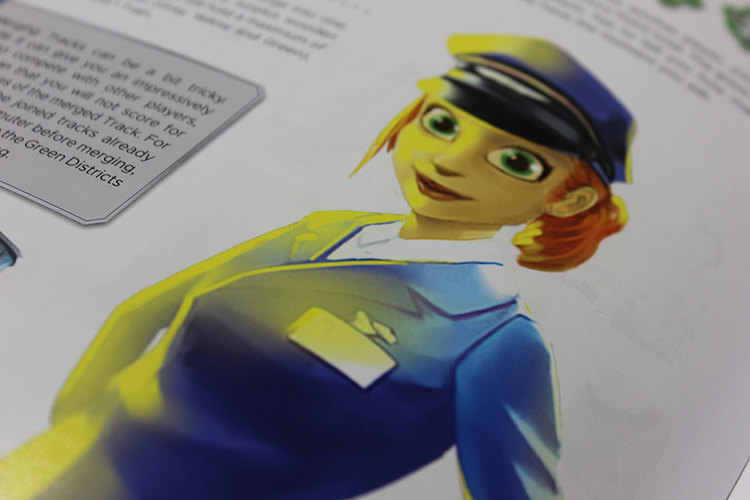 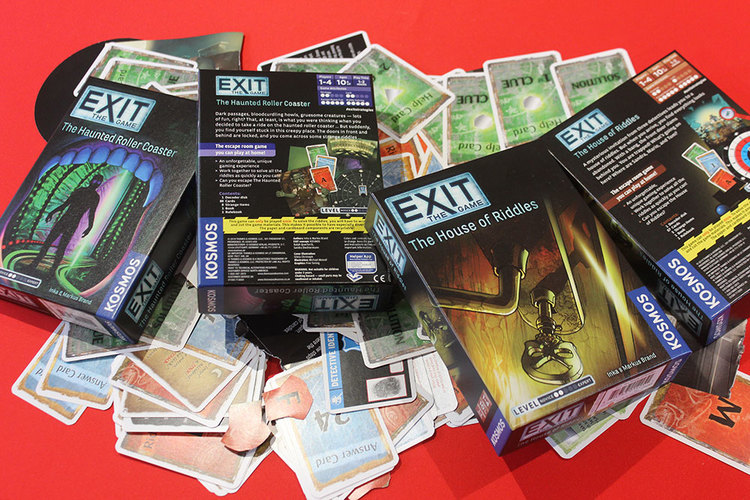 We all know that games are not the work of one person, it takes a team of play-testers, developers, marketers and artists to get a game on a shelf. However, usually all we rea... Continue reading →