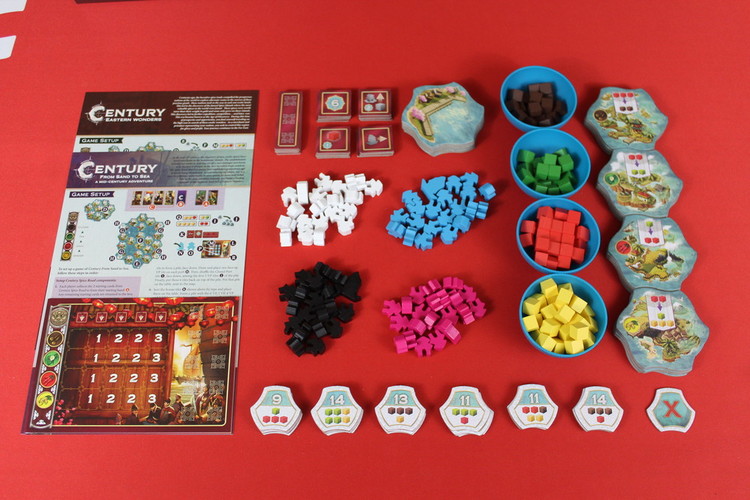 Century: Spice Road was released last year to much acclaim and was the first in a set of three games that were all standalones that could then also be played together. This year, brings us Century: Eastern Wonders. If you have played Spice Road, you will be familiar with a lot of he concepts in Eastern Wonders but there are enough new elements to keep you amused.

Sort all the market tiles by the trade symbol on the back and randomly remove one of each type, then shuffle the rest all together. Use these tiles to set up the board, either as the ‘standard’ set up shown in the rulebook or else create your own map after a few plays! Place the four port tiles at the four corners of the board. Remove the ‘closed port’ tile from the pile of victory point tiles and shuffle the rest together then place one on each of the four ports. Take the top five tiles and shuffle in the ‘port closed’ one, place these six tiles at the top of the stack. 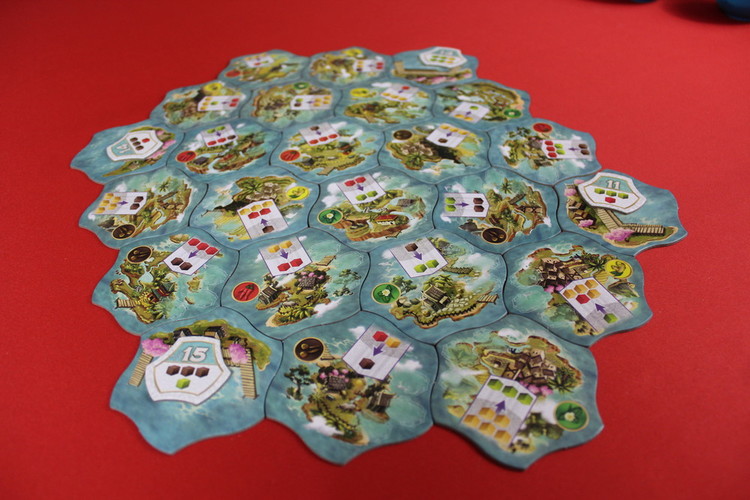 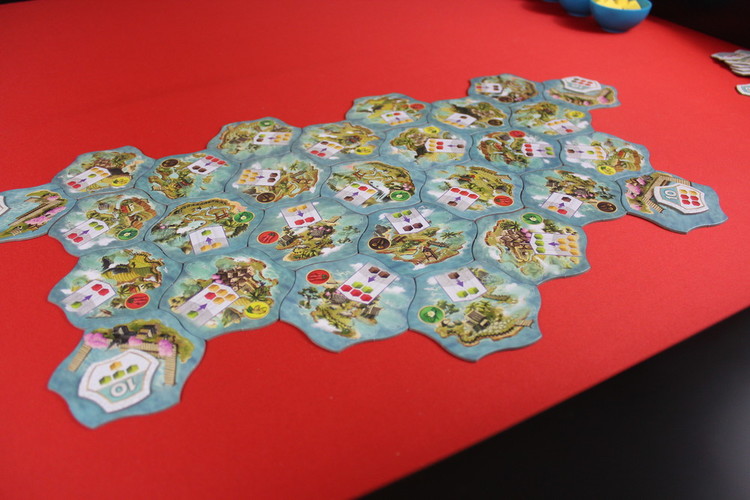 Just one example of setup variant

Sort the bonus tiles into piles by type - the victory point tiles should be sorted in ascending order, with the six at the top. Shuffle the player boards and distribute them, the first player will be the one who has the special icon on the top right. Each player takes a boat and all twenty outposts of the matching colour, placing them on the marked spaces on their board. In reverse turn order, players choose which starting bonuses they would like from: four yellow, two red, two yellow and one red or one yellow and one green. These get placed on the right hand side of the player boards in the marked spaces.

Place the bowls, containing the spices, in rarity order, with Ginger (yellow) at the bottom, then Chilli (red), then Tea (green) and finally Cloves (brown) at the top. You are now ready to play!

Each player takes one turn each round. During a players turn they may move their boat and then perform an action. You can move your boat one space for free. Then, you may continue moving your boat by placing a single cube onto each space that you move off. If you end your movement on a tile with other player's boat(s) you must pay each of their owners one cube. If you cannot pay, you cannot land there! If you land on a tile with cubes you may pick them up and place them in your hold on your player board. You must, however, pay any other players first. 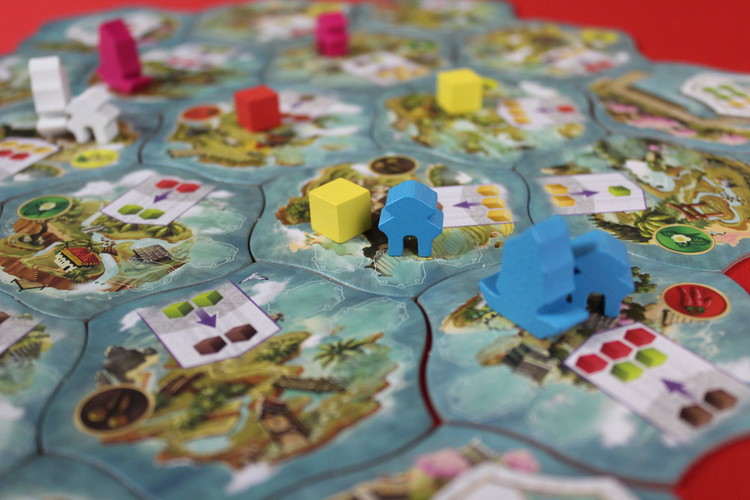 After moving you may perform one of the following actions:

A Market action if you are on a Market Tile

A Port action if you are on a Port Tile or

A Harvest action on any tile. 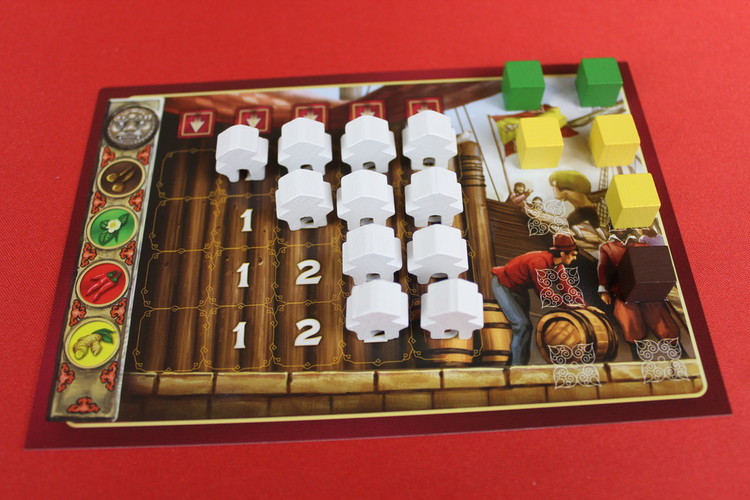 Market Action - If you are on a market tile, you first have the option to build an outpost. You may only have one outpost on each tile, but multiple players may build on the same space. The cost to build an outpost is one cube for each outpost already on the tile, so your first one is free, but the longer you leave it, the more expensive it will get! When you build an outpost, take the left-most outpost from the row that matches the trade symbol on the tile. If, after placing an outpost, you empty a vertical column choose a bonus tile and place it next to your board.

There are five types of bonus tiles to choose from: 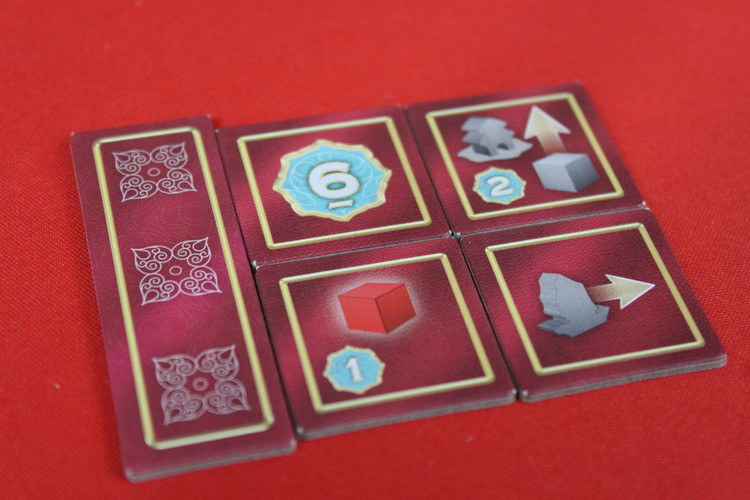 Once you have an outpost on a tile, you may also take the market action. Trade the cubes listed at the top for those underneath. You may perform this action as many times as you are able to. 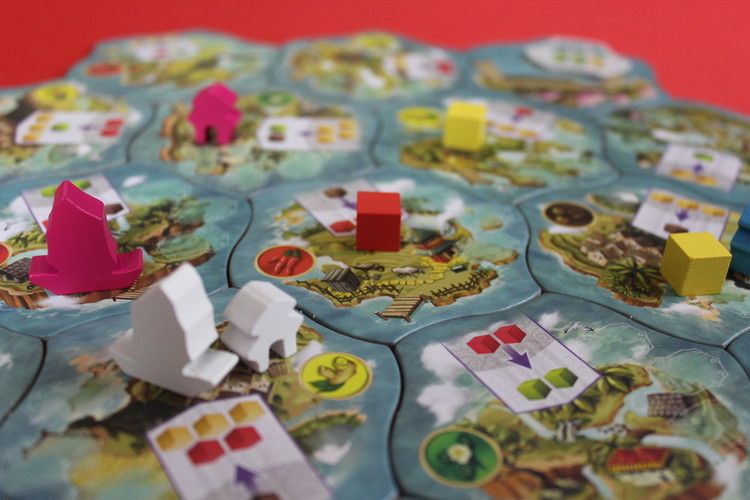 Port Action - If you on a port tile and have the required goods, you may claim that VP tile by returning the goods from your hold to the main supply. Take the tile and place it face down next to your player board. Then, take the top VP tile from the stack and place it in that port. If you draw the closed port tile, that port will no longer have a VP tile on it. If a VP tile is claimed from another port, move the closed port tile to it and place a new tile on the space that previously closed.

Harvest Action - Take two yellow cubes and add them to your hold. If, at the end of any turn, you have more cubes than cargo spaces available, you must discard down. Your cargo hold starts at ten but may increase with bonus tiles.

The game ends when one player claims their fourth VP tile. Play continues to the end of the round when points are then added up. Points are gained from VP tiles, bonus tiles, uncovered values on their player board and remaining cubes in their cargo hold, with each non-yellow cube being worth one point. The player with the most points is the winner!

Century:Eastern Wonders is a worthy sequel to Century: Spice Road, while it has a similar feel it is a completely new and fresh game. We’ve come to expect great production quality from Plan B Games and this doesn’t disappoint! As well as being a stand-alone game, Eastern Wonders can also be combined with Spice Road to create ‘From Sand to Sea’, but that’s another post altogether!