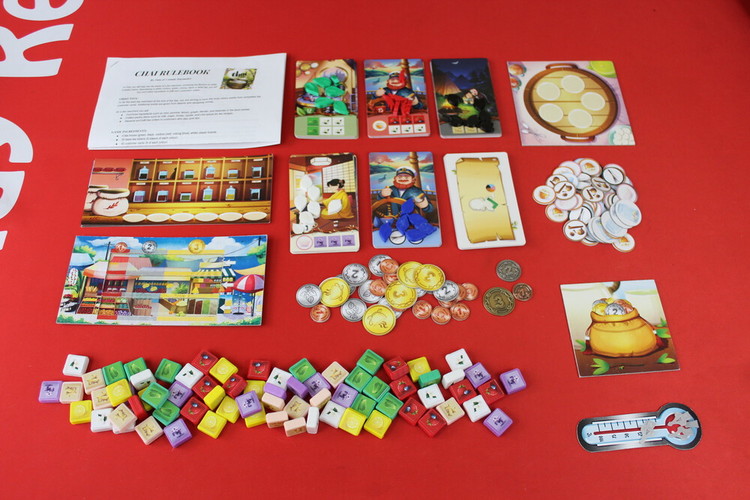 We love our tea here! I’m talking proper tea, not that weird stuff they all drink when I go to Dallas! I’m a sold English Breakfast Girl myself, but Rob is known to be partial to a bit of Chai so I figured it was time we take a look at this!

In Chai, you take on the role of a tea merchant, crafting and combining ingredients to fulfil your customers' orders.

The Kickstarter back in December was a huge hit, raising more than five times the target amount and unlocking a huge number of upgrades, lucky you if you got the deluxe version as it’s pretty fancy!

We have a pretty basic prototype copy, so obviously all components are not the finished version, but in the retail version of the game you will get:

Place the tea flavour tiles into the bag and the market board in the centre of the table. Draw them, one at a time, and fill up the market board starting on the left of the top row and working your way along each row. Place one of each pantry item (milk, sugar, honey, vanilla and chai spices) onto the pantry board and put the rest of the tokens into the pantry bag. Shuffle the ability cards and place three face up in the play area. Place a number or tea cups equal to the number of players in a row, shuffle up the tip tokens and place one face down in front of each cup. Place the clip on the 0DEGREE C mark to indicate the first round. Give the starting player one coin and all other players two. 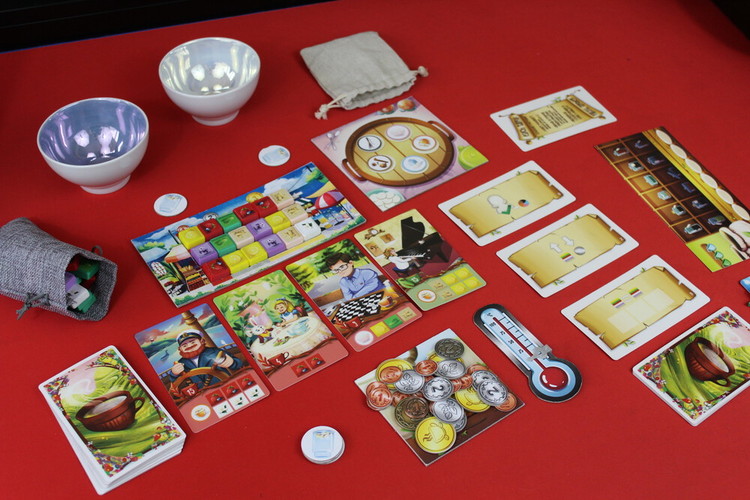 The game is played over five rounds as indicated by the thermometer. Each round lasts a varied number of turns and completes when all the teacups are filled.

In each turn, a player gets the choice of three actions:

Visit the Market - When a player declares they are visiting the market they immediately get three coins. Players may buy any tea flavour tile, when they do so they also take any other tiles of the same type that are touching, either horizontally or vertically. They must pay the highest cost shown on the top of the column they have taken from. Remaining tiles all slide to the left and the player may continue to make purchases, always paying the highest cost indicated. Players may never hold more than twelves tiles in their tea house. After a player has finished purchasing, the market board is refilled one tile at a time, starting with the top row and moving left to right. 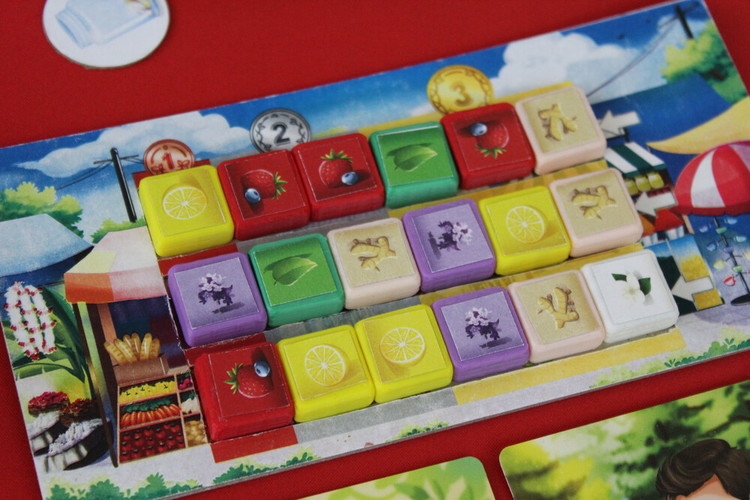 Visit the Pantry - A player may pay one coin to discard all ingredients from the board and refill before taking goods if they wish. They may then take three items, either from the face up on on the pantry board, may draw blindly from the bag or take a combination. Players may never hold more than six pantry items in their tea house. 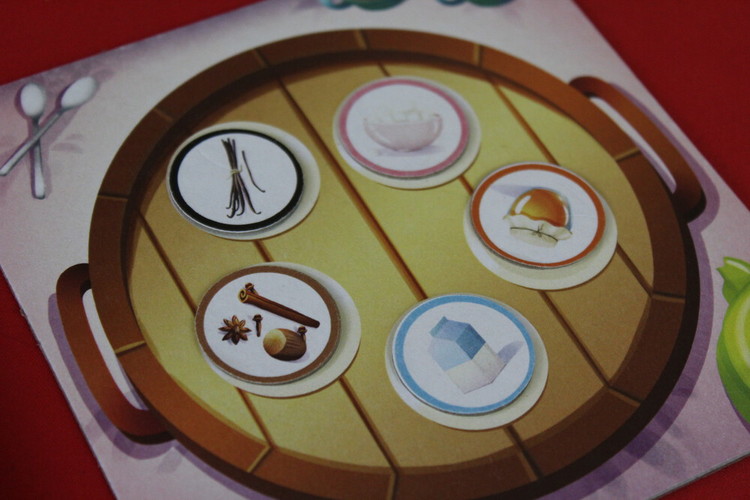 Reserve and Use Ability - A player may reserve a customer either from the visible customer pool or blindly from the top of the deck. If taken from the face-up pool, another customer is immediately drawn to replace the one taken. Players take the customer and place them face up next to their tea house. Players may never have more than three customers reserved. After reserving a customer, the player may choose to use one of the face-up ability cards. 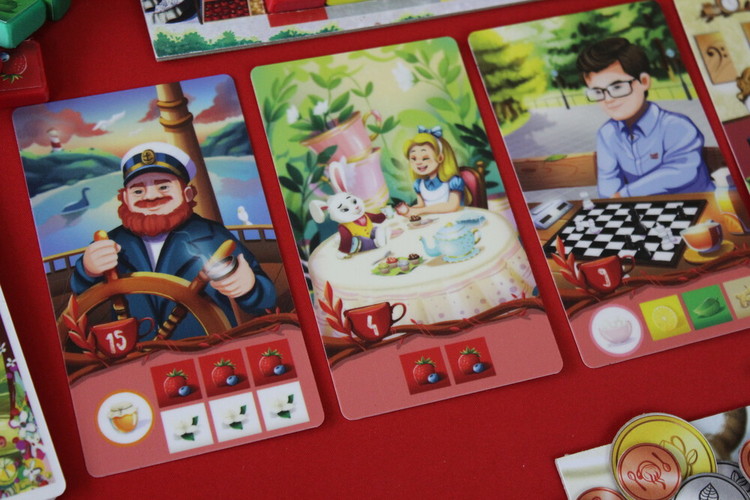 At the end of a players turn, they may fulfill a customer order either from the face up pool on the table or from their personal tea house. Take the ingredients needed (tea tiles and pantry items) and place them into a teacup with an unrevealed tip token. Also, place into the cup one base tea token of the cards colour. If it is your colour, take it from your board. If it is another players, you must give them one copper to take one from their board to complete the customers order. They may not refuse the sale. After the order has been fulfilled, flip over the tip token and the player gains that tip bonus. The fulfilled customer card is placed face down next to a players tea house to be scored at the end of the game. 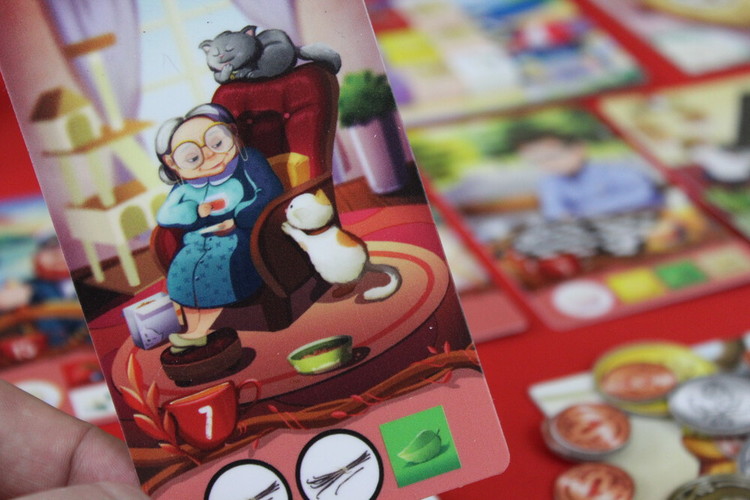 If a player flips the last unrevealed tip token, the round is over (eg. in a four player game, four orders would need to be fulfilled) At this point, prepare for the next round. Do this by shuffling the tip tokens and placing them face down in front of the tea cups. The next clockwise player draws an ability card from the deck and chooses which of the current ability cards to place it on top of. The round tracker moves up one notch and the next round begins!

The game ends when a round has been played at 100 °C on the thermometer ie after five rounds, so in a four player game, a total of twenty customer orders have been fulfilled. Once that order has been completed all other players get one last turn so while they may be able to fulfill orders, no more tips can be earned.

Players add up their totals from completed customer orders and add it to their money total. In three to five player games a diversTEA award is also granted to players, count up the number of different base tea colours in fulfilled orders and add that to the total. The player with the most points wins! If there is a tie, the player with the least number of completed orders is the winner.

Chai is, at heart, a set collecting game. The flavour tile puzzle adds a new and unique element. Sometimes it’s worth paying for a single tile to create a cascade reaction and get exactly what you are after or to prevent someone else getting what they need! The art on the customer cards is beautiful, whimsical and has a touch of Dixit surrealism to it. I was obviously very pleased with the cat lady in the red deck! Chai is one of those games that can be enjoyed by people of all gaming levels - it even has a set of rules for advanced play (along with a solo mode). Kickstarter fulfilment currently under way and Chai will be hitting retail very soon.