Posted on February 20, 2018 by Katrina Demeanour 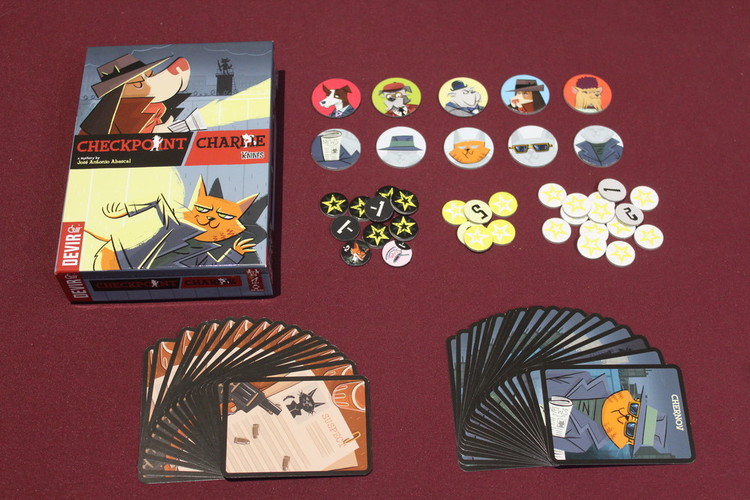 I was fooled! I played a game on the side of the dogs! But there’s enough cool cats in this game to make up for it. The elite K-Nine hound dogs are watching Checkpoint Charlie, waiting for the chief of spies to try and sneak past them on his way to deliver secrets to the dogs enemies. Do you have what it takes, using your powers of deduction to capture the master spy before anyone else does?

Each player chooses a hound dog investigator card and takes the matching counter. Shuffle all the score markers face down (some of these are optional rules so you can choose to play with them all or not!) Place the five clue counters in the cloth bag. Each players draws one in secret and chooses which side up they want, then places it underneath their investigator card. Shuffle up the cat suspect cards and place the deck in the middle of the table. 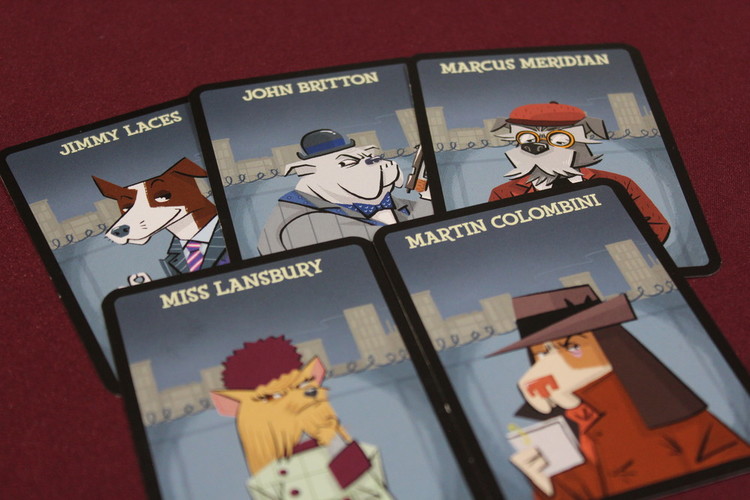 If you are playing with less than five players, shuffle the unused investigator cards into the bottom half of the deck.

Each clue counter has two sides that are the opposite of each other. There are five characteristics that define the identity of the Chief of Spies and each player will start the game knowing one of these. The clues are:

He is wearing a hat or not

He is wearing glasses or not

He is wearing a raincoat or a sweater

He is a grey cat or an orange cat

He has a newspaper or not 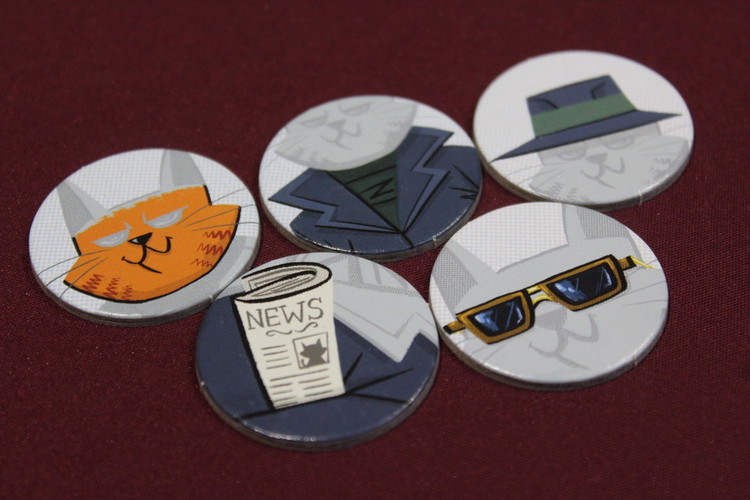 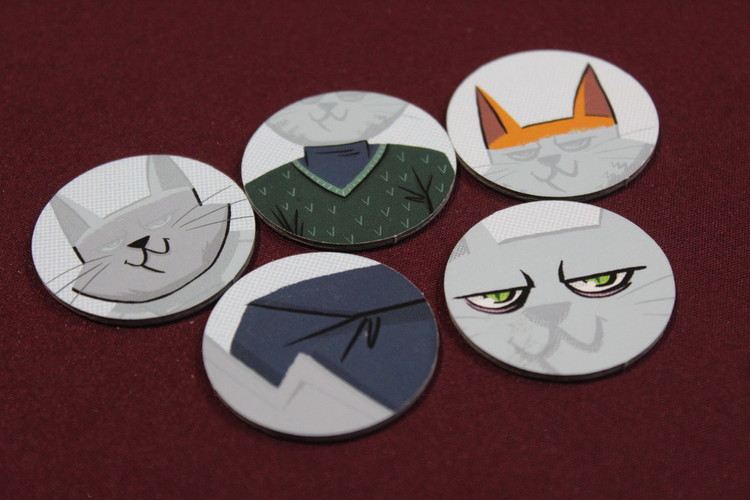 Starting with the first player and taking turns, investigators draw a card from the deck and shows it to the other players. Then, using the clue they know they eliminate or keep the suspect in play. If it is eliminated, put the card into the discard pile, if there is a match, place the card face-up in front of you so it is visible to everyone else. Players continue play in this way, revealing suspects until all players but one have made their accusations.

In three or four player games, when a canine investigator card is revealed from the deck, one of the remaining clue counters is taken from the cloth bag and flipped, like a coin. The face up side will show another clue about the suspect that is visible to all players.

At any point in the game, you may make one accusation in your turn. Based on the revealed suspects, you can deduce what the other players clues are by which suspects they have kept. Along with the knowledge of your clue and any public ones you can figure out what the chief of spies looks like and place your investigator token on top of the card. You may do this at any point, even if it is not your turn but you may do it only once. You may not accuse a suspect that already has a token on. However, if someone has already accused the Chief of Spies you can gain points by identifying the assistants. The assistants have four of the five clues that match the Chief of Spies. Even if you have made an accusation you must carry on drawing cards as before.

The round comes to an end when all but one investigator has made their guess, so in a four player game the round is over when three players have placed their tokens.

When this happens, all players reveal their clue token and check the suspects against the revealed clues. 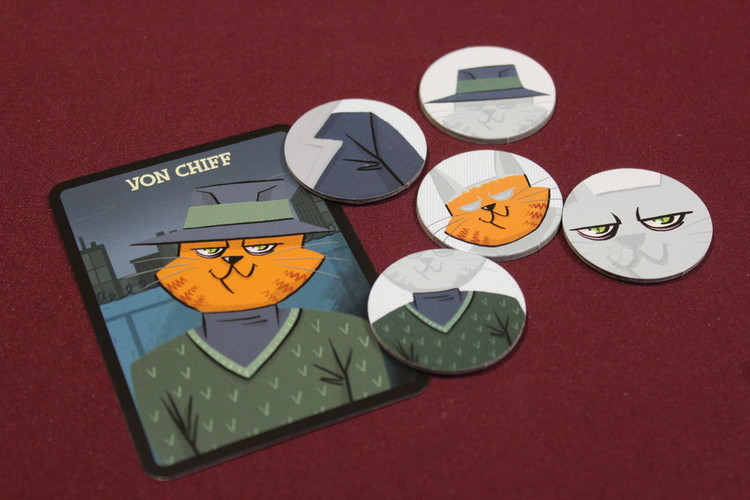 There are a couple of variants included in the game.

Firstly, there are four ‘Cafe Adler’ markers, a gold one, two white and a black one. If you want to use these, substitute them for the appropriate coloured tokens. A player who receives one may choose to swap it immediately with another players matching coloured marker, or may keep it for a subsequent scoring phase and again swap it with another player.

The game also includes the ‘Stasi Officer’. If you use this variant, swap out one of the black scoring markers with the Stasi Officer marker token. If you draw this marker at the end of a round, immediately reveal it to all players and take the matching card and once all players have taken their scoring markers, place the Stasi Officer one back. The card indicates that you are being watched and this limits your investigation. You will have to play the next round with your clue counter uncovered so everyone can see it. 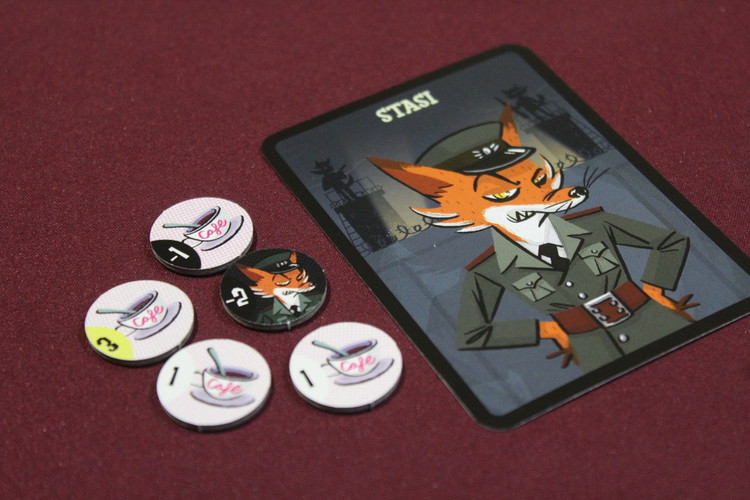 Checkpoint Charlie is a fun deduction game that can be played in as many or as few rounds as you like, making it fit nicely in any gaming session long or short. Every player has to keep a close eye on every card that every other player is placing and try to make that fast deduction, and if you don't pay attention it could be the difference between catching the chief of spies or just one of his minions. The quirky artwork makes it particularly appealing and the variants add an extra challenge.