Posted on February 27, 2019 by Katrina Demeanour 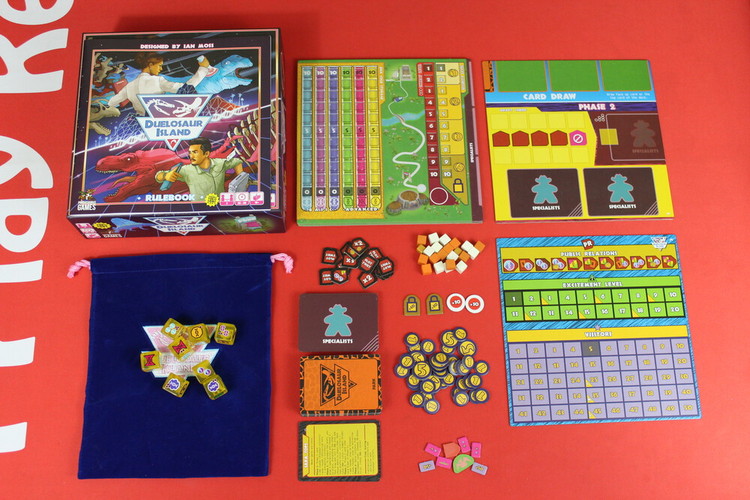 In Duelosaur Island the former corporate giant Moss/Moriya is splitting into two companies. Players take on the roles of the two CEOs battling it out to beat your rival in their latest venture, a dinosaur theme park. Snatch the best DNA and attractions from them in order to generate better PR and beat them at their own game!

Place the main board and the draft board in the centre of the table. Shuffle the park cards, flip the top three face up. Shuffle the specialist cards and place the deck next to the draft board. Shuffle the plot twist tokens and select four at random. Place these on the four leftmost spaces on the draft board, leaving the far right space empty. Place the unused tokens back in the box. Place the PR marker on the starting space of the track on the main board. Give each player a company board and the ten markers of their colour. Place six of the cubes on the zero spaces of each DNA type, one on the one space of the threat track and on the one on the security track. The last two cubes go on the main board - one on the five space of the visitor track and on the one space of the excitement track. Give each player their three starting park cards. Choose one as a starting dinosaur, tuck this in at the top of the player board so just the dinosaur part is showing and choose one as a starting attraction, tuck this in the bottom of the board so just the attraction part is showing. The remaining card will be your starting hand. Put the dice in the bag and hand it to the starting player. 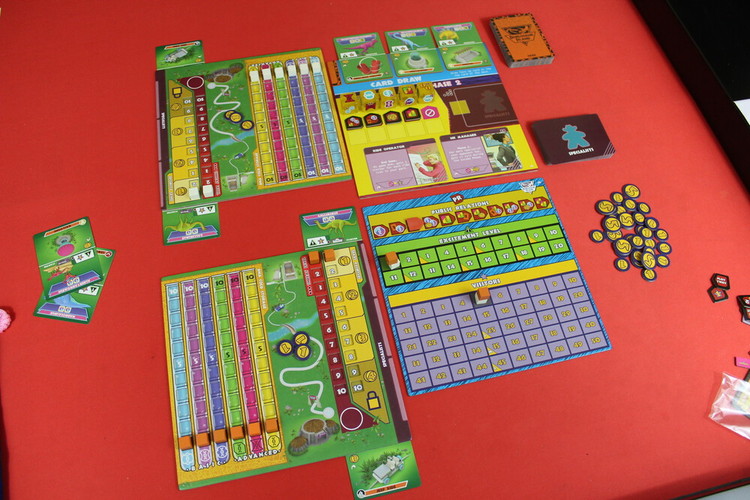 The game can be played as a short, medium or long game, meaning players need to reach 25,35 or 45 points respectively to win. Agree on what length game you want to play at the start. When scoring occurs at the end of a round, check to see no player has hit this score (there are reminders on the scoring track) if they have, end the round then proceed to end game scoring.

Each round is played over four phases:

Income - Players gain coins and draw cards. Base income is three coins, players gain one extra for each food icon showing on attractions in their park. Also, gain an extra two coins for each income space reached or passed on the income track (These are the spaces marked with a yellow triangle) Before drawing cards, you may pay a coin to discard the three cards on the face-up row. Each player may do this once per round. Then players draw cards in turn order. Each player gets to draw one card plus an additional one for each merch icon showing in their park. Cards may be drawn from the face-up display or from the top of the deck. As soon as a card is taken from the display, it is immediately replaced.

Draft - The starting player will prepare the draft, however, the second player will get first pick. The starting player draws three specialists from the top of the deck and chooses two to place on the draft board. The last one is discarded and not used. Then, they draw five dice from the bag and rolls them. They then place them onto the draft board, pairing them with the plot twists so this can make for some tough decisions. Starting with the second player, players will either choose a DNA dice (along with it’s paired plot twist) or a specialist card until each player has made a total of three selections. If you draft one of the dice, move it to the bottom row to show it has been chosen. Move your cube up on the appropriate DNA track(s) as shown on the dice and gain the plot twist benefit. This may be extra coins, cards or DNA. When you take a specialist card, it may be used in one of two ways. Either place it to the right of your player board to get its ongoing effect or discard it for the one-off bonus as shown on the bottom of the card. You may never have more than three specialists in play, however, if you discard one to take a new one, you do not receive the discard bonus from the card. Once both players have taken three items, there will be either a card or a dice left over. Move this to the threat area of the draft board. The number of dots shown on this will be added to each players threat level when the time comes. 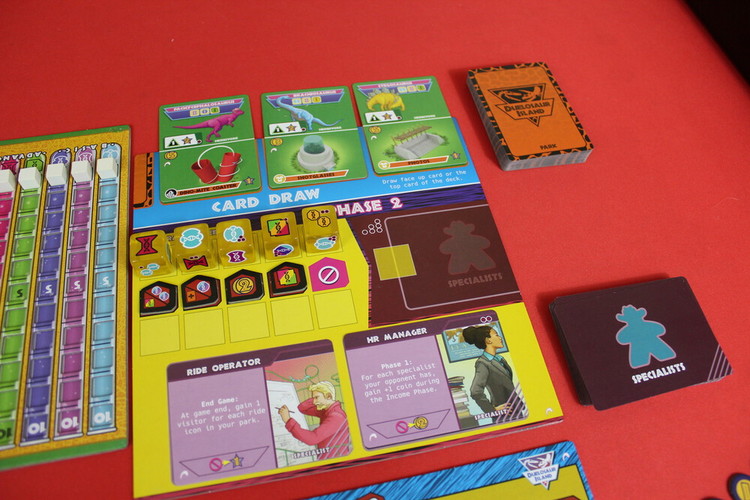 Build - Both [players may take their actions simultaneously here. Players may take as many or as few actions as they want and the phase will end when neither player wishes to do anything else.

Sell DNA - Give up either two basic or one advanced DNA to gain one coin.

Mix DNA - Discard a park card from your hand. Then, either convert two basic DNA into one advanced DNA or vice versa.

Increase Security - Pay the indicated number of coins to increase your security level. You always pay coins equal to where you are moving your marker to. 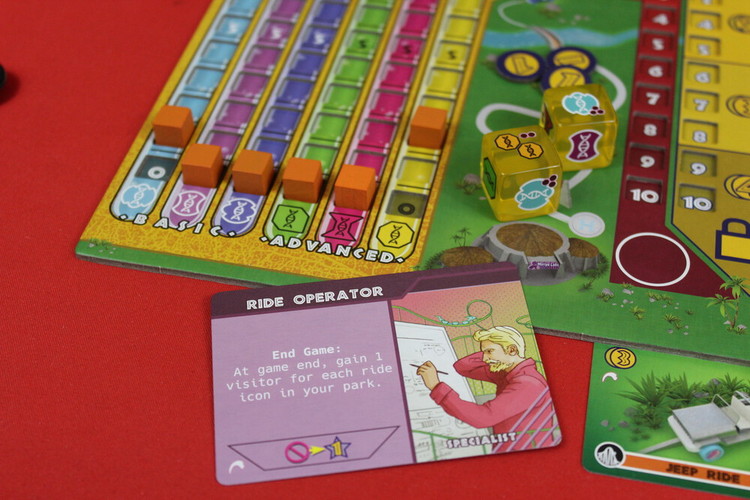 Create a Dinosaur - Pay the DNA shown on the card. Tuck the card under the top of your player board so only the dinosaur portion is showing. Then, immediately increase your threat level on your player board and excitement level on the main board. The red dots indicate threat and the green triangle represents excitement. These symbols are also clearly marked on the appropriate tracks.

Build an attraction - Spend the required coins as shown on the card. Tuck the card under the bottom of your player board so only the attraction part is showing. Remember that food icons give you extra coins during the income phase and merch icons give you extra cards. Ride icons immediately grant you the bonus shown where the PR marker is on the track. If a card has two ride icons on, remember you get the bonus twice. 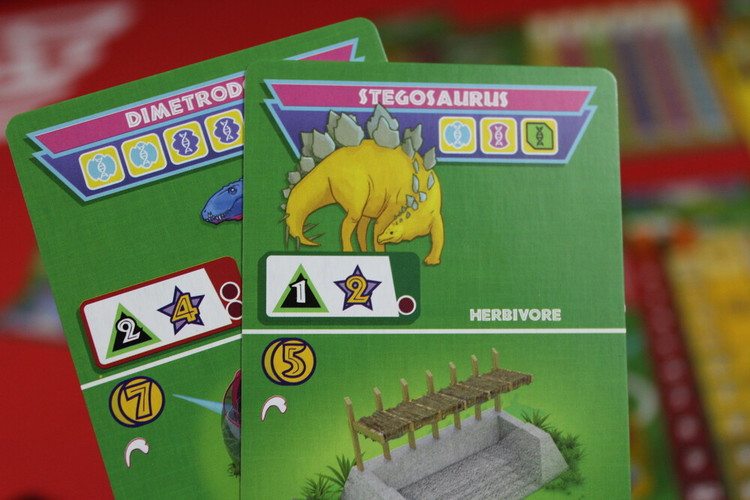 Visitors - First, compare threat level vs security level, not forgetting the extra threat from the item that wasn’t drafted. If your security level is equal to or higher than your threat level, nothing happens. If your security level is lower than your threat level, then mayhem ensues! Your dinosaurs escape and start eating your visitors. The number of visitors eaten is twice the difference between your threat and security levels. If you would go below one on the visitor track, remain at one but take a lawsuit token which will be worth minus five points at game end. Then, gain visitors - OK, so some people may have been eaten, but that’s still exciting, right? Gain a number of visitors equal to your excitement level. Then all players receive a PR bonus. Determine which player is lowest on the PR track. This player will choose a PR bonus first. They may choose to take any item from any space to the left of the PR marker. The other player then chooses a bonus, however, their options are now more limited. They may only choose to take a bonus to the left of the space chosen by their opponent. This means if the first player chooses the PR bonus at the start of the track, then the second player receives nothing.

At the end of the round check to see if either player has reached or exceeded the end game points agreed at the start of the game. If not, prepare for the next round. Each player must discard down to three cards in hand, remove all items from the draft board (ensuring all dice are back in the dice bag) and move the PR marker one space to the right. Turn order changes so give the dice bag to the player who went second last turn.

At the end of a round if a player has reached the points, the game ends and final scoring occurs. Players will then gain additional visitors in five different categories.

Dinosaurs - Gain visitors for the dinosaurs in your park, this is listed in the lower left of the card.

Attractions - Again, this is shown in the lower left of the card but only appears on cards with a $5 plus value.

Attraction Sets - Each set of three different attractions in your park is worth an additional four visitors, you may have multiple sets.

Lawsuits - Lose five visitors for each lawsuit token you have. 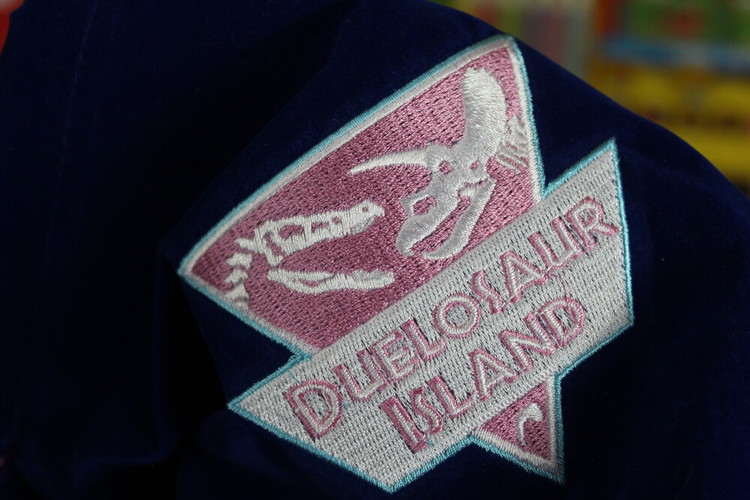 Generally, I'm skeptical about two-player versions of popular games as they can come across as watered down versions of the original. However, Duelosaur Island is different enough to warrant having both games in your collection. While we love Dinosaur island, just set up and pack down can take a while (we need a good insert for it!) Duelosaur Island is a great alternative with some really original game play, but enough in common with its predecessor that it feels like a comfy pair of shoes if you have played the original. The drafting aspect of the game is great, quite often you end up discarding a really great specialist rather than give it to your opponent. If there is a dice you want, you may be tempted to place it in the spot with no bonus to make it less desirable to your opponent, but then you end up getting no bonus. And, of course, there is the usual stress of keeping your security level equal to your threat level so there are times you will draft an item just so that three pip doesn't end up hitting you at the end of the turn.

Once you know what you're doing, you can easily play this in around half an hour which makes it a great little game with all the meat of Dinosaur Island!