Posted on December 04, 2019 by Katrina Demeanour 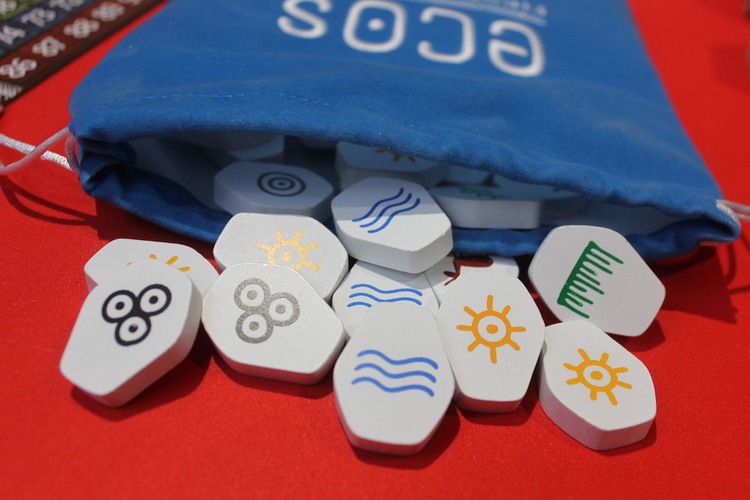 OK, so we’re a sucker for a game with an animal theme (yes, especially cats) and this has big cats so we’re in! In Ecos players are creating the planet together, but quite often with different ideals! Simultaneous play means no downtime, just a lot of fun to be had! 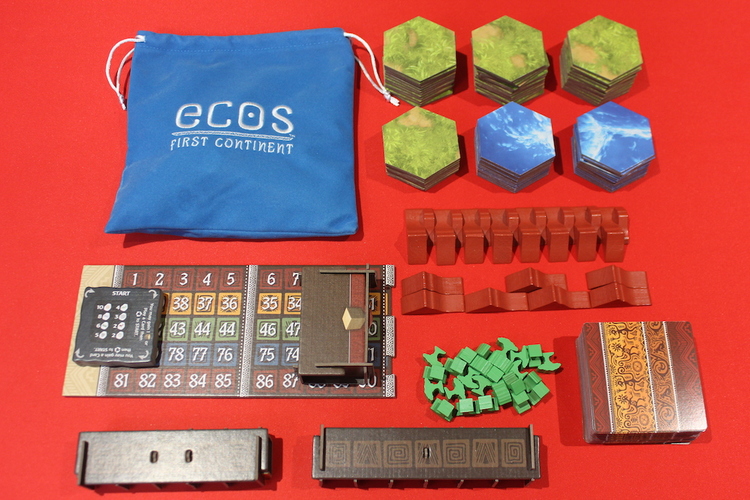 You’ll need to assemble the token holders when you first open this game, but they are pretty sturdy and easy to put together!

Each player chooses a colour and takes the matching dial token, placing it in front of them with ‘START’ at the top. They also take seven energy cubes. Place the score track on the table and place the score marker for each player on the starting space.

If this is your first game, play with the pre-set decks. There are six decks with matching footprints on the bottom left of the card. Each contains twelve cards. Sort these and place each deck face down and get players to randomly pick one. Each deck has three cards with the footprint icon printed slightly darker - these are your starting active cards and should be placed face up in front of you. The other nine cards are now your hand.

Create the initial landscape shown using 1 desert, 1 grassland, and 2 water tiles. Place the rest of the tiles to one side in their appropriate stacks. Place the mountain and tree pieces nearby as well as the animal tokens. Put all of the element tiles into the bag. 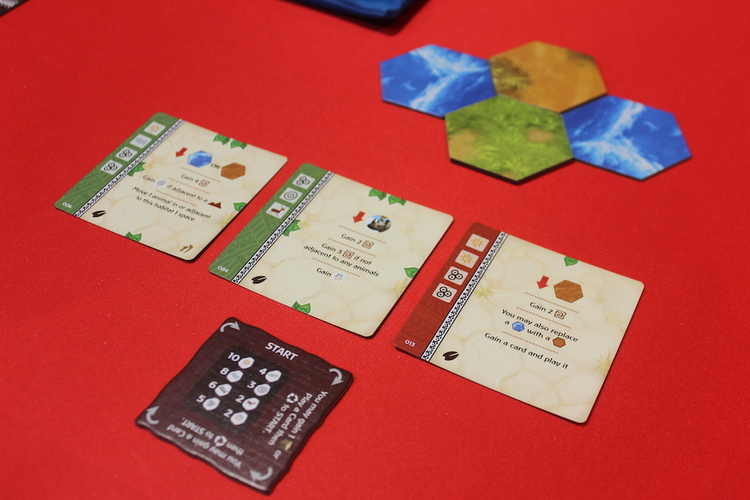 The starting player is the ‘Harbinger’. They take the Element bag and draw one tile, announcing what it is to all players. Each players dial shows a list of all available elements and their frequency in the bag. All players may then place just one of their energy cubes onto one of the cards with the element icon just drawn. If you have no element cubes spare, you may choose to move one you had previously placed.

You may also choose, instead of placing a cube, to rotate your player dial by 90 degrees. You must also do this if, for some reason, you are unable to place a cube. 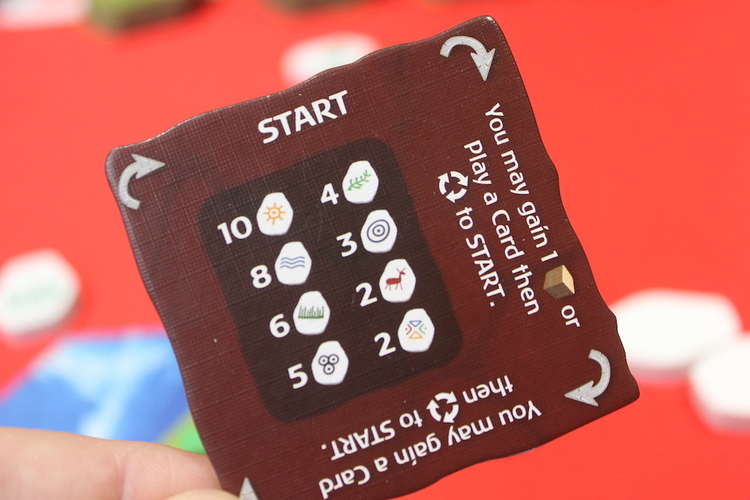 Any cards that now have all their energy spots full must be resolved. Remove all cubes from the card and place them back in the supply. Carry out the effect on the card. If the card has more than one leaf showing at the top then rotate the card 90 degrees so the number of leaves showing at the top of the card is now one less than it was previously. This card may be used for its abilities again. If there is only one leaf showing then this card is discarded after use. If multiple players complete cards in the same turn, card effects are resolved in player order.

Every time an element is drawn, instead of placing a cube you may instead rotate your player dial. Once you have made two rotations, you may choose to gain a card and rotate it back to the start. Alternatively, you may rotate it three times and either play a card from your hand or gain an energy cube from the supply if you use one of these abilities rotate the player dial back to the start position.

When you gain a card you may either look at the top two cards from one of the decks, add one to your hand and place the other face-up next to the deck or you may take any one of the face-up cards. The brown cards tend to be simpler and help to set the board up and the blue cards tend to be more interactive and worth more points.

Playing cards simply means choosing a card from your hand and placing it face-up in front of you ready to start gathering energy cubes. 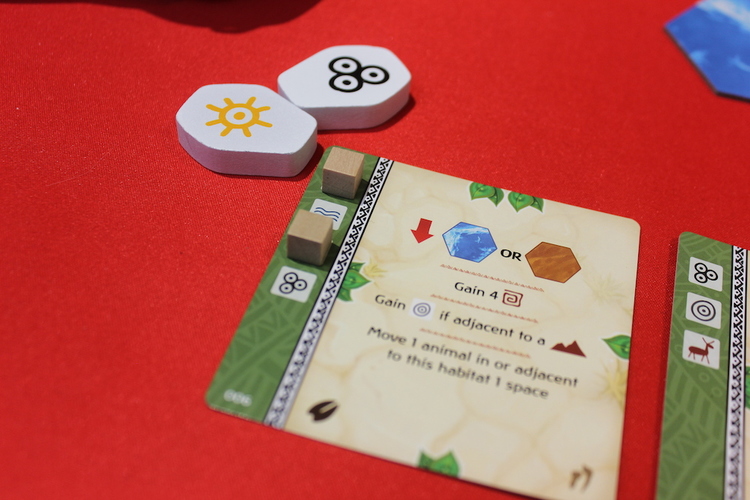 Once all players have either played cubes or rotated their dials and cards have been resolved, play continues with the Harbinger drawing another element tile from the bag and the process is repeated.

If placing tokens when a card directs you to, the following rules must be obeyed:

Animals marked with a terrain type must be placed on the indicated terrain - you obviously can’t put a shark in the desert!

Animals marked with a feature (mountain or tree) must be placed on terrain with that feature.

If a card tells you to place an animal on the landscape then you can place it on any tile that can support it that does not already have an animal on it. If all appropriate tiles already contain animals then you may place it regardless of any other species on the tile. 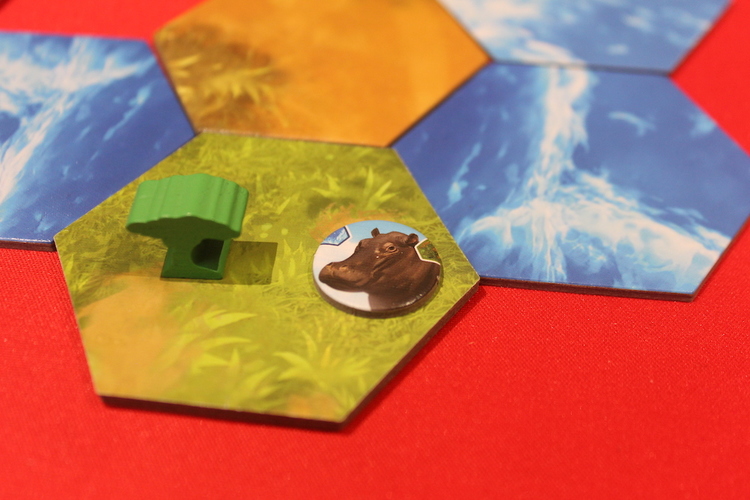 Mountains may be placed on any land type (grassland or desert)

If the Harbinger draws a Wild Element token this indicates the end of the round. Players may place a cube on any element space and resolve all card effects as normal. However, all the previously drawn Elemtn Tokens go back in the bag and the bag is passed to the player on the left who becomes the new Harbinger for the round. This is also when you check for game end conditions. If any player has 80 or more points, the game ends and the player with the most points wins! (If you want a shorter game, you can play to 60 points - both these figures are clearly marked on the score track) 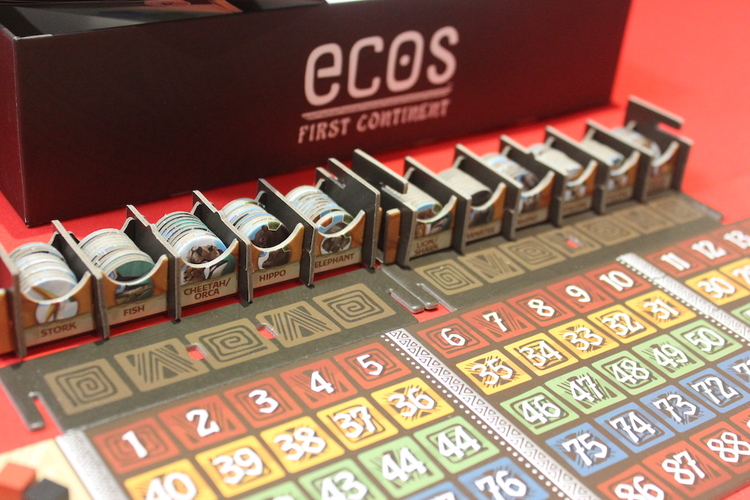 Ecos has elements of Rise of Augustus but has a world building building element. While the animal tiles are cute there seems to be a real lack of interaction between them. There is interaction between the animals through card mechanics, however we only came across a handful in the games we played. Given the strong theme it would have been nice to see organic interaction happening e.g between herbivores and carnivores. Logically it would make sense if a carnivore ate herbivores on the hex automatically. On the plus side the placement and territories each animal could live made sense which was nicely thematic, e.g. shark in the water but a hippo in the water and the grassland. The overall quality of the game is fantastic, the land tiles are good thickness and sturdy, wooden trees and mountains are really nice even down to the two different styles of mountain to give an extra sense of character to the board. The trays as you can see above are a really nice touch too.

Ecos is a pleasant world building experience with nice animal artwork and the simultaneous play that even at six players it doesn't get bogged down.

When you say card game, you generally think of a small box, cheap, cheerful, with quick play. This is not that sort of game! In fact, I think Cranio Creations have done it a dis... Continue reading →