Posted on December 15, 2017 by Katrina Demeanour 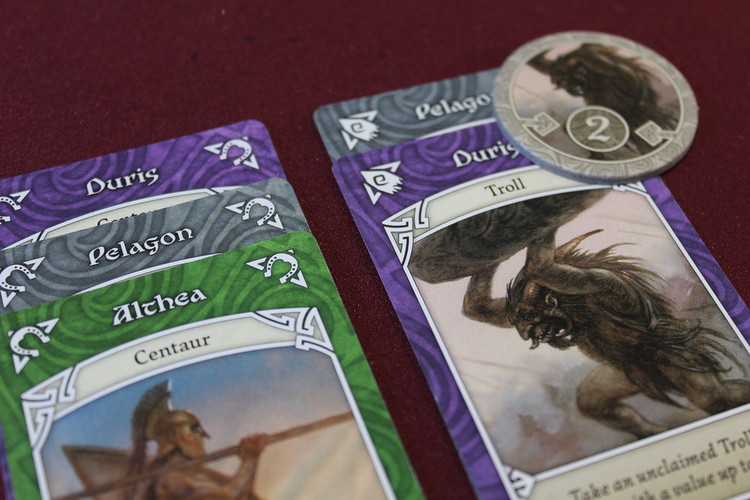 In the lands of Ethnos, a new age is dawning. The six kingdoms lay empty and the twelves tribes that used to inhabit it have been scattered to the winds. Players compete to become the next Lord of Ethnos by uniting the tribes and earning more glory than their rivals. 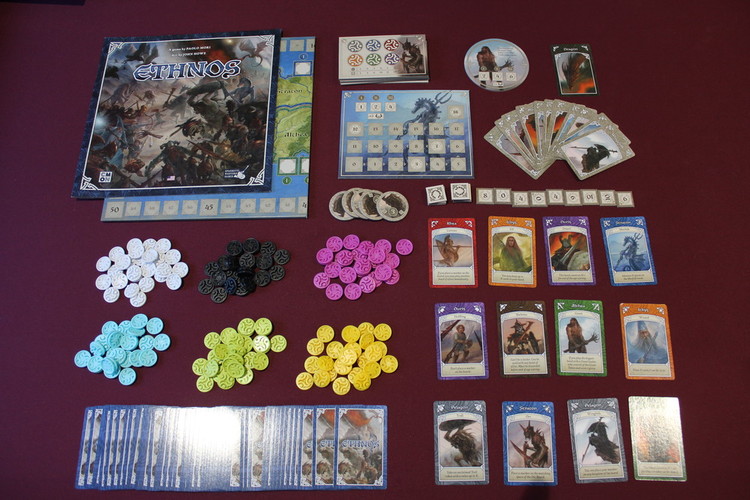 Place the board in the middle of the table. Shuffle up the glory tokens and randomly place three in each area of the board. Then, arrange them in ascending order, with the lowest token on the 1 space and the highest on the 3. Each player chooses a colour and takes the appropriate markers, placing one on the zero of the score track. Shuffle the setup cards and draw six, these will be the tribes used for this game. Take the tribe decks for those six tribes and shuffle them all together - this will be the deck for this game. Place the appropriate tribe boards and/or tokens on the table.

Deal one card to each player, this will be their starting hand. Then turn over a number of cards from the deck equal to twice the number of players eg, three players=6 cards. These go face-up next to the board and become the market. Split the rest of the deck into half and shuffle the three dragon cards into the bottom half. The game occurs over three rounds, each round ends when the third dragon shows up.

There are two actions you may take in a turn, either:

Draw a card - This may be from the marketplace or you may draw the top card from the deck. If you draw from the marketplace, do not replace the card. You may never have more than ten cards in your hand. If you draw a dragon card from the deck, put it to the side and draw another card to replace it. The first two dragons have no effect, other than to warn you the end of the game is fast approaching. The third dragon indicates the end of the round and play immediately stops and scoring happens (more on that later!) OR

Place a band of allies - A band is a number of cards that are either all the same colour or all the same tribe. A band can be between one and six cards in size. Choose one card to be the band leader and place that card on top. If your band is large enough you may then place a control marker on the kingdom that matches the colour of your leader cards. Markers may only be played if your band has more cards than you have control markers in that area. To place your first marker in an area you only need one card, to place your second two etc. Then, you may use the ability on your leaders card. If you then have any cards left in your hand, you must discard them into the marketplace for other players to possibly pick up. The band of allies will stay in front of you until the end of the round.

Players continue taking turns until the third dragon in the deck is revealed. At this point, the round immediately ends, players discard all cards from their hands and scoring occurs. 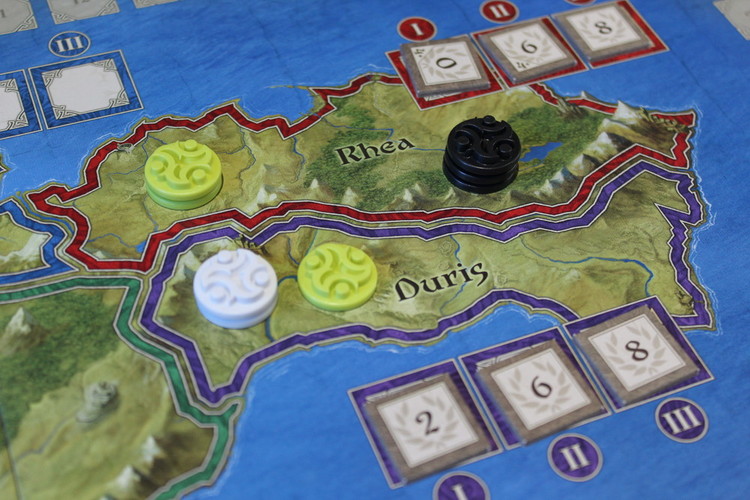 Then score for each band of allies you have, a band of two scores you one point, three scores you three points etc.. it is clearly marked on the board making it easy for everyone. If this is the first or second round, go through setup as before, all cards are handed in, however, tokens on the boards stay in place. The player with the least points will start the round. If it is your third play through the deck, add the scores and whoever has the most points, has the most glory and wins the game!

The Tribes. Remember you only take the effect of the leader of your band!

Centaurs - If you place a control marker when placing a band, you may immediately place another band.

Dwarves - Scores as if there were an additional card at the end of the round.

Elves - Allow you to keep X cards in hand when X is the size of the band you have just played.

Halflings - Do not allow you to place a control marker on the board, however, due to their numbers you can create large bands for big points at the end of the round.

Minotaurs - Counts as an additional card in the band for placing control markers.

Wizards - Draw X cards when X is the size of the band you have just played.

Wingfolk - Allow you to place your marker in any kingdom on the board.

Trolls - Take an unclaimed troll token of the value of the band you have just placed. These will then break ties for control of a kingdom at the end of the round.

Skeletons - These can never be the leader of a band but count as ‘wild’ cards and can be placed with any race or colour band.

Orcs - You may place a marker on your personal orc board that matches the colour of your orc leader. At the end of each round, you may choose to remove these to score points or keep them to score more points in the next round.

Merfolk - Move your marker up a number of spaces equal to the number of cards in your band. If you reach or pass a space with a marker symbol, you may place a control marker in any kingdom. At the end of each age, score points for the merfolk board as if it were a separate kingdom.

Giants - If you have the largest band of Giants on the table, gain two points and take the Giant token. This may move during the round if people play larger bands. If you still hold it at the end of the round, gain the extra points as indicated. 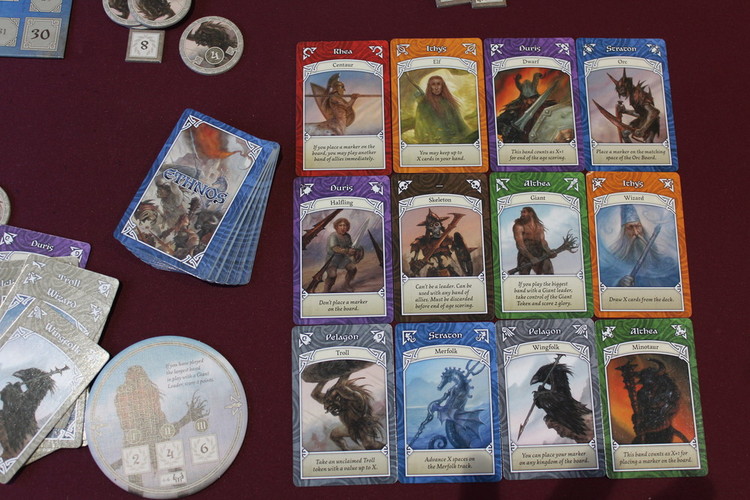 While the premise of this game is simple, there is so much to love about it! The random tribe selection means your chances of playing the same game twice are super-slim and while I have now played this 5 or 6 times I am yet to explore all twelve of the available tribes. The two main mechanisms - set collection and area control, are both things anyone is familiar with, making it easy to teach/play and even at the full six players, it plays pretty quickly. While the board itself is fairly bland, the artwork on the cards is lovely and the stacking player tokens are nice (not sure about the colour palette though!)

CMON have also produced a lot of lovely back story and flavour text in the rule book, making it a rich and immersive experience.