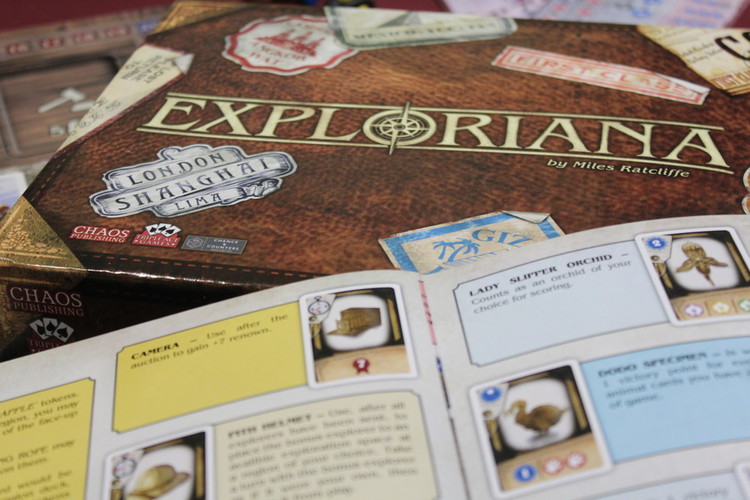 Let me start this by saying I LOVE push your luck games, then say I am so very bad at them!

Exploriana is set in the late 19th Century. Vast new continents are now open to explorers, containing treasures, new species of plants and wild animals. You are one of those explorers, however, beware, for the more exploring you do, the richer you become but the more hazards you will face!

Exploriana is a 2-5 player game that takes between 45 and 60 minutes to play. Accumulate the most points to win. This will be through exploring the various regions on the board, but beware the perils!

This is a prototype copy so component quantities and quality will differ from the finished version, but ours came with: 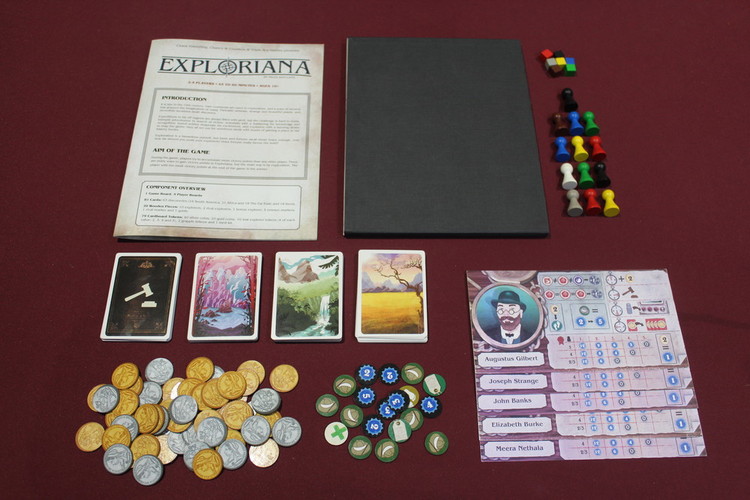 Put the board in the middle of the table and have each player take a player board, a set of explorer tokens and six coins. Place everyone's renown marker on zero with the starting players on the top of the stack. Shuffle each deck of discovery cards and place them on the matching region. Turn over the top two cards from each deck and place them overlapping on the board so you can see the icons on each card. 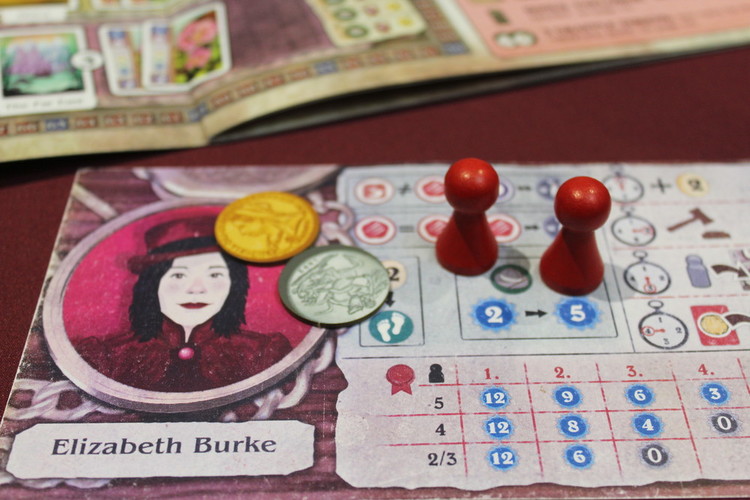 Then prepare the auction decks depending on the number of players. With five players have four decks of four cards, four players have three decks of five cards and two or three players have three piles of six cards. Put any remaining cards back in the box as they will not be used this game. Place a random lost explorer token on the top most spot of each region, face down, and put the rest to the side for now, also keeping them face down. 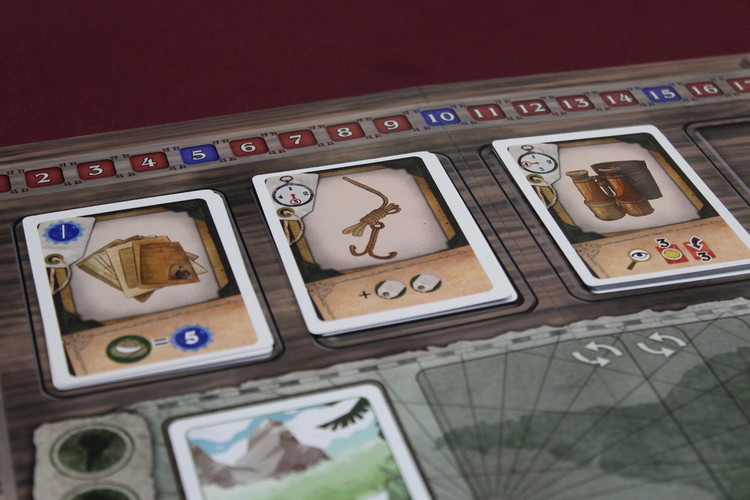 At the start of a turn, each player takes two coins. Then the auction phase will start, beginning with the player on the highest renown and working down to the player with the lowest. Turn the top card of each stack over. Then players will take turns selecting an item for auction. The player who chose the item gets the first bid, go clockwise round the table and everyone gets one bid for the item. The player who wins it then pays their coins and puts the item face up next to their board. In four or five player games not everyone will get a chance to select an item for auction, though they will get a chance to bid.

After the auctions have happened, players will start exploring! (that’s what we’re here for, after all!) 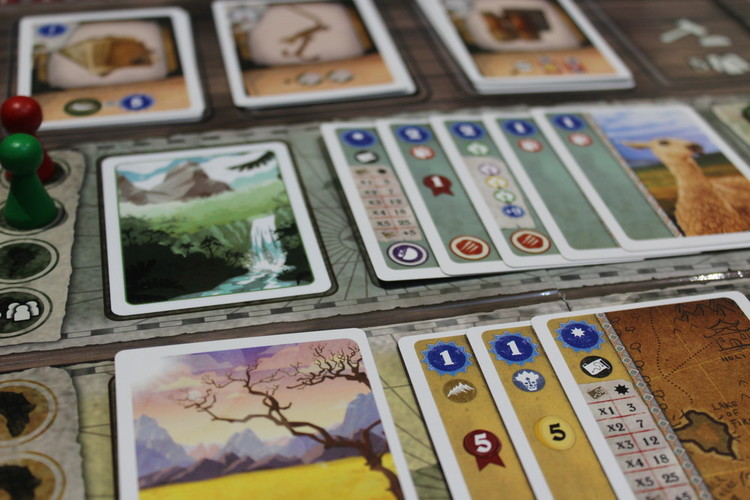 Turns start in South America, then Africa, and lastly the Far East. Working from the top to the bottom of each area, players may take any or all of the following actions:

Use an item, discarding it for any effect and place it with any cards removed from play.

Pay two coins to the supply an place a guide so it covers one of the hazards shown on a face up card in that region. This action can only be used once per exploration.

Turn over the top card of the region deck and place it face up so it overlaps the previous cards on the row.If after taking the explore action, there are either three different hazards or three hazards the same, your explorer is ‘lost’. Place a random lost explorer token on the topmost space in this region. Return any guides you placed and take two coins back from the bank. Shuffle all cards back into the region deck and reveal the top two. Return the explorer back to the player who receives nothing this turn. You can, at any point, decide to stop exploring and take cards from the display. Take either all the animal cards revealed in the display, any one non-animal card or a lost explorer token. You may turn over up to a total of five cards. If you manage to get a full row of five cards without becoming lost, you may take two picks. Take your cards and place them face down in front of you. If cards give you renown or coins, take that immediately. Any lost explorers that you take give you a choice of renown or coins as well as the end-game points shown on the reverse.

Always restock the region so it has two cards showing before the next explorer sets off on their adventures!

At the end of a round, if any of the region decks or the auction decks are empty, the game ends. Use an explorer pawn to count end game points. Points are awarded for:

Renown: Players are awarded points for placing on the renown track. First place always gets twelve points, and depending on the number of players points are awarded accordingly (there is a chart on each player board)

Coins: Score one VP for every two coins you have

Lost Explorers: Score the number of points shown on the back of each token you have collected.

Locations and Treasures: These are all worth one VP as marked on the card.

Maps: The more map pieces you have, the more points you score!

Orchids: There are three colours of orchids, one for each region. Each scores you two VPs, however, each set of three you have gives you a bonus of nine VPs.

Animals: These are worth between one and three VPs as marked on the cards.

Items: These all score differently and will have instructions on the card.

The player with the most points is the winner, in the case of a tie, the player highest up the renown track gets the win! 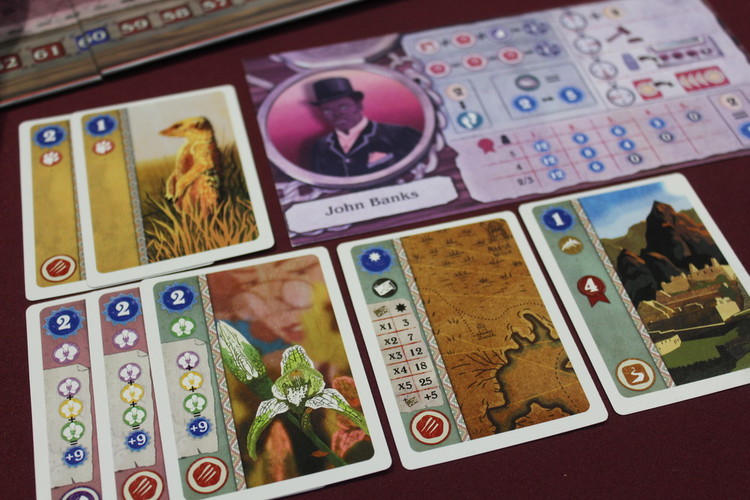 We love a bit of push your luck here (despite me being really bad at it!) and Exploriana is no exception to the rule! The artwork is just lovely which makes for a truly engaging theme, it draws you in and makes you feel like you are an explorer on a great adventure.

My main gripes with the game are all things I think will be fixed for the final version. I don’t like the super glossy board, it squeaks when you touch it and glares a lot with too much light. The rulebook needs some tweaks and set up felt too long for what was usually quite a short game. My components were just loose in the box so a good insert will fix that and I’m sure the rulebook will be worked on before the game is considered finished. The gameplay itself always felt exciting and I also love a bit of auctioning so this ticked all the boxes for us.

Exploriana is a venture by Counters Out - A Bristol-based company making board games that stick in the mind, and is being launched on Kickstarter on the 24th April in collaboration with Triple Ace Games and Chaos Publishing. UPDATE: The Exploriana Kickstarter campaign is now live