Posted on January 21, 2020 by Katrina Demeanour 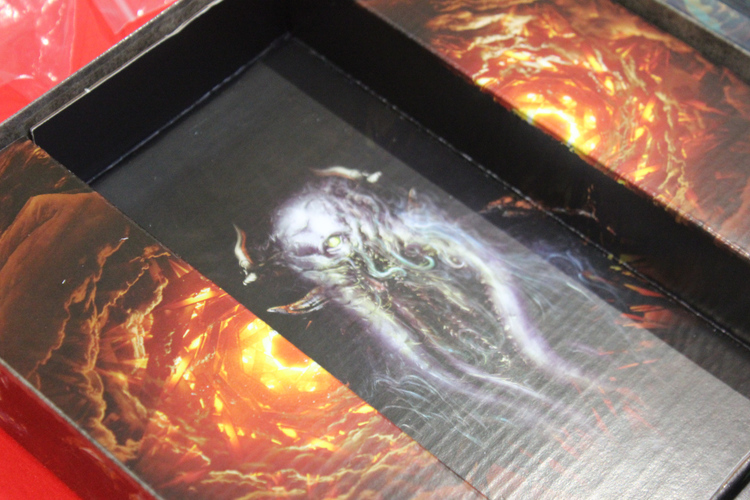 On opening the box, there are two things I love about this game before I even play it:

Anyway, onto the game!

Gates of Delirium is a 2-4 player game with multi-use cards that has area control elements and set collection, all wrapped up in a Cthulhu setting with beautifully illustrated Great Old Ones. 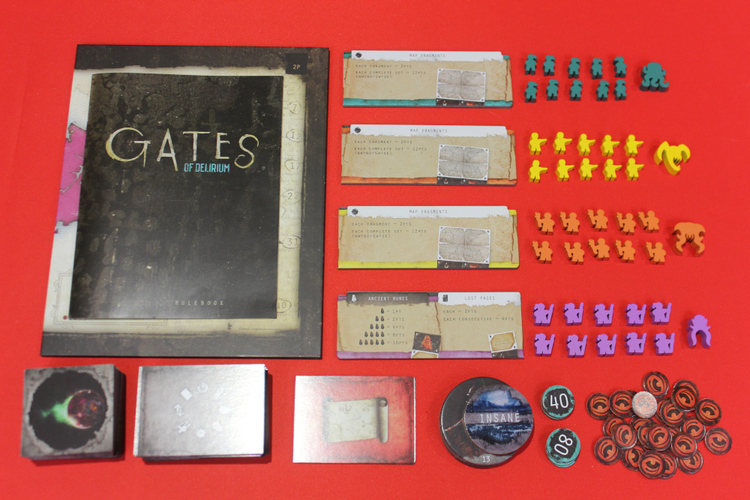 Place the board in the centre of the table, making sure you have the correct side up for the number of players (one side is for 2 players and the other for 3+)

Shuffle the gate cards and form the supply by placing four cards face up next to the deck. Sort the monstrosity discs into a pile in ascending order (so the highest value is on the top) Shuffle the scroll deck and place one card face down on the appropriate spaces on the top of the board. Put the rest in the box as they will not be used. 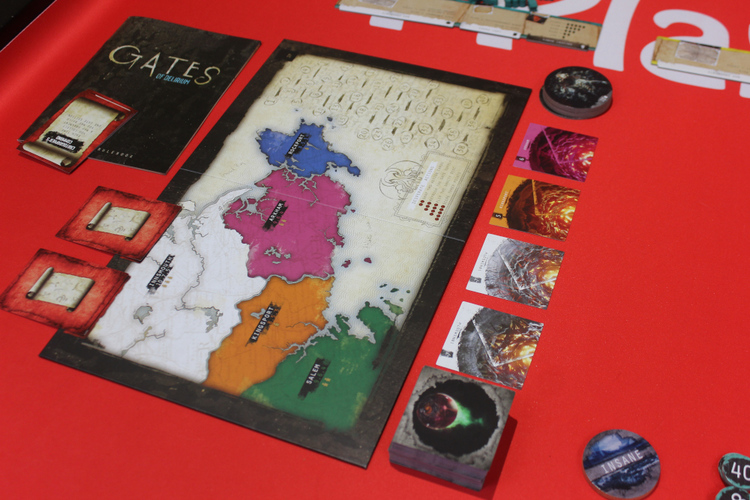 Shuffle the action cards and deal five cards to each player. Give each player a player journal, score marker and ten investigators in their chosen colour. Place the score tokens and desperation tokens next to the board.

Determine the starting player and give them the sanity disc. 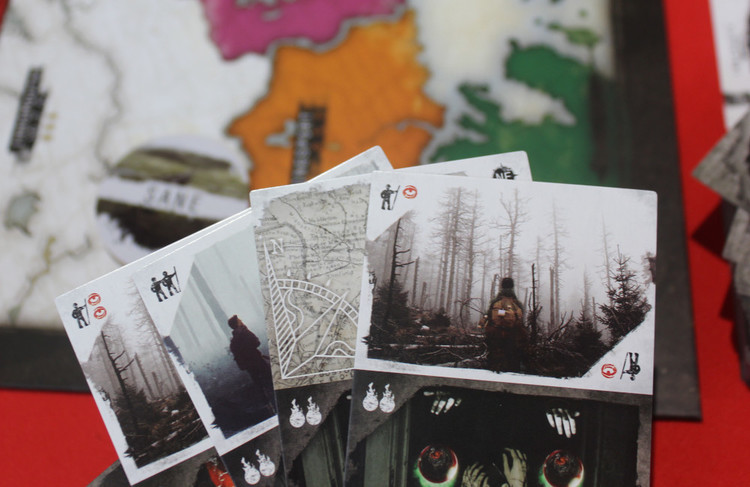 Add the card to the corresponding part of your player journal. At the end of the game, you will score four points for every consecutively numbered page and two points for each non -consecutive page. These are numbered between one and twenty and there is only one of each number.

Add the card to the corresponding section of your player journal. It takes four sections (NW, NE, SW and SE) to complete a map. Each completed map is worth twelve points at the end of the game and individual map fragments are worth two points.

Take the number of investigators as indicated on the card (one or two) and place them in any regions on the map. If you have no investigators left, you may instead, choose to move them from elsewhere on the map.

Placing investigators will allow you to score points by winning area majorities when gates are opened. Points are given to players with the first, second and third most in a given area. 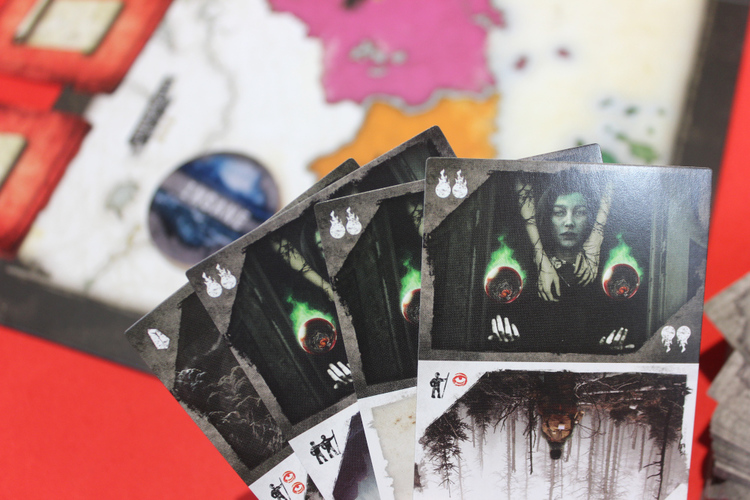 Add the card to the corresponding area of your player journal. At the end of the game, points will be given depending on the number of Ancient Runes you have collected. The larger your set, the more points you will gain!

Remove an opposing investigator from any region on the board and return it to that players supply. Replace it with one of your own investigators.

If you have none left in your supply, you may instead, swap an opponents investigator with one of your own.

Choose one or two (dictated by the symbol) gate section cards and place them in your play area. When drawing them, you may choose to take from the face-up supply or draw from the top of the deck.

There are five different gate cards, each corresponding to an area of the map. You may have multiple gates in progress at one time but only one of each type. Each gate needs a specific number of cards to complete (this is noted on the cards) These cards also give you desperation tokens (I promise I haven’t forgotten about them!) 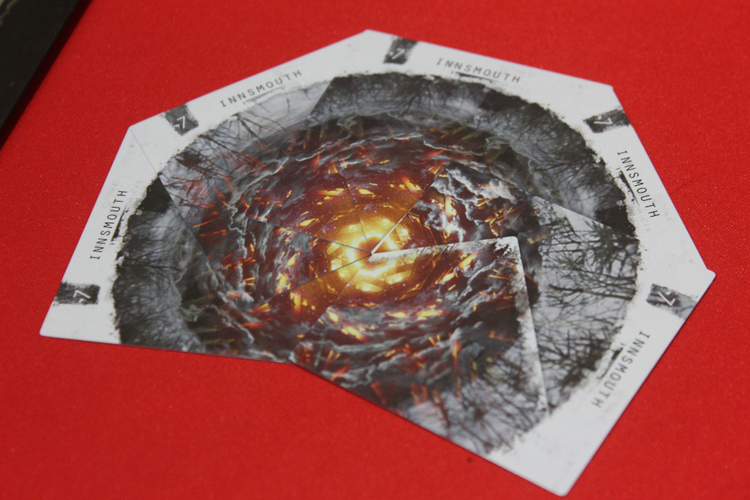 When a gate is complete, carry out the steps to score the gate

Release a Monstrosity: The player who opened the gate takes the top Monstrosity disc from the stack and immediately scores the points shown on it.

Reveal a Scroll: If the collected Monstrosity token shows a scroll symbol, reveal the next scroll card from the top of the board.

Score the Region: Determine area majority for the region that corresponds to the opened gate. Score points as shown on the board, then remove all investigators from that area.

I promised I’d come back to these!

Certain cards with give you desperation tokens. You can use these to perform desperate actions at any point in your turn (even halfway through a turn) These are shown on the board.

The game ends when the final Monstrosity Token is taken from a player opening a Gate. The game ends immediately if a player is in the middle of their turn, they don’t take any further actions. Game end scoring then occurs. 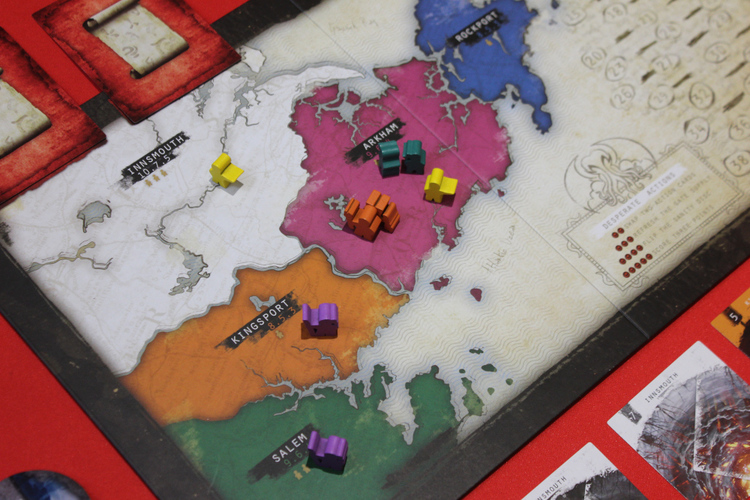 Score one point for each investigator on the map. Some scroll effects will grant end game points, score these. Then look at each players journal. Score points for the number of Ancient Runes they have collected as shown on the journal, if you have more than five score for multiple sets. Score for Lost Pages and Map fragments. The player with the most points wins! In the case of a tie, the player with the most Desperation tokens left over wins (these may not be spent during final scoring) 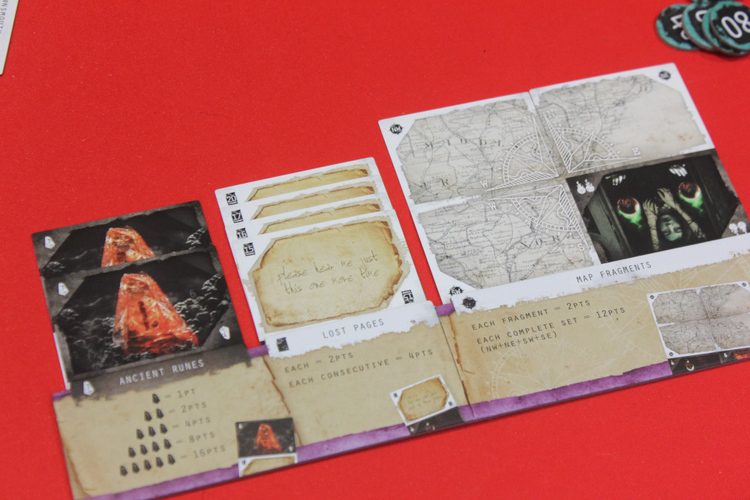 Gates of Delirium has a bit of everything! Dual card use, set collection, area control along with a bit of player conflict (depending on how mean your opponents are!) Being forced to use cards in a particular way on the whim of your opponent is a good way to change up the gameplay and forces the player to make the best possible use of their cards.

Yes, there are a lot of Cthulhu themed games out there but this is something quite different and this is super accessible for players of all ages and skills. Everything you need to know is stated clearly on each players journal and the symbology is easy to understand. The artwork is nice but not overpowering nor too scary for younger players. The way in which the gate cards are laid out is just a really nice touch, watching that gate come to life as you build it. 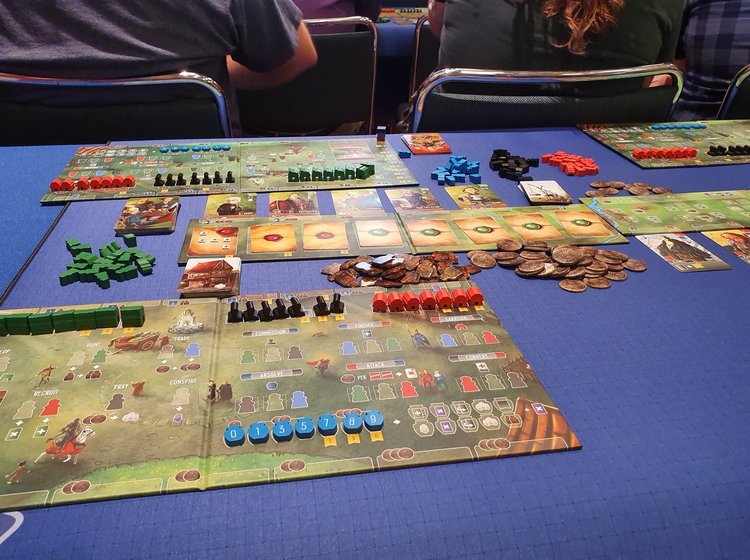 So, last year I played just over 200 games total. (BGG says just under 200 but I know I forget to log sometimes!) At least 82 of them were ‘new to me’ games, either games from... Continue reading →