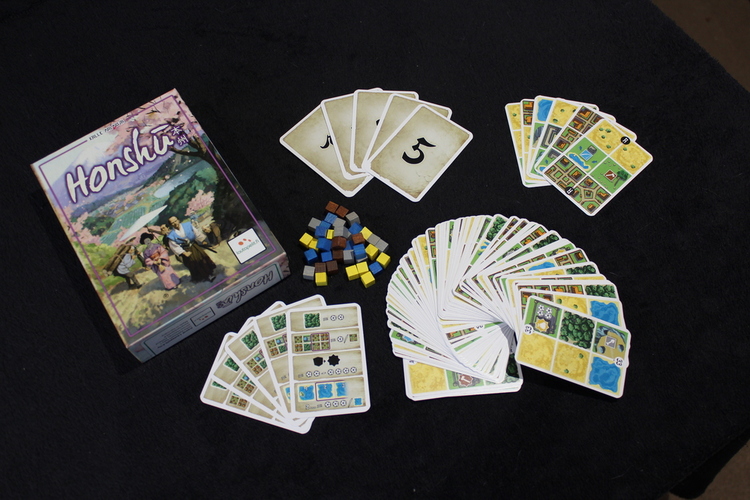 Play as a Lord or Lady seeking fame and fortune in new lands, seeking new opportunities for your noble house. Honshu is essentially a trick taking game that also has city building and resource management as part of the play.

Start the game by dealing out one starting province to each player and placing resources on each of the production squares shown on that card. Then deal six map cards to each player.

Honshu is, at base level a trick taking game ie players will all choose a card to play and the highest numbered card will win the ‘trick’ and get first pick of the available cards, second highest gets second pick and so on... This means a big part of the skill here is in manipulating your position and getting the cards you need for your city. You can always add a resource cube onto your bid to give it +60, thus ensuring the win if there is something you really need.

Once you have chosen your card, you place it into your city. There are only a couple of rules here. Firstly, you must cover at least one square of another card and second, you must not cover water spaces. Don’t forget to place resources on the production squares as you place them as these can score you big at the end of the game. After three rounds, your tableau will look something like this. 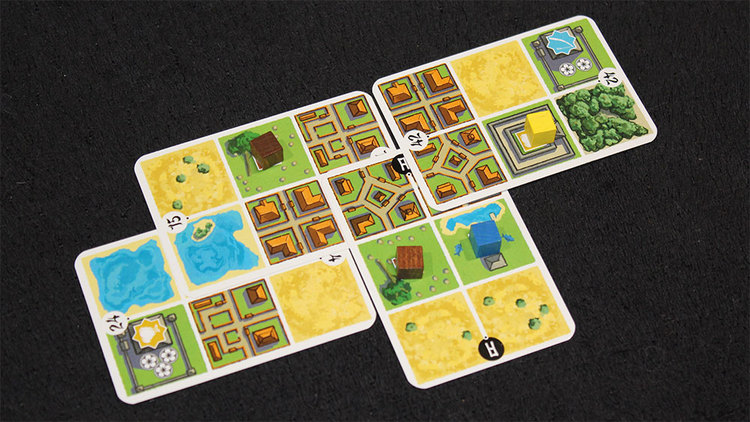 Here is where Honshu starts to differ! You will now pass your remaining three cards to the player on the left and play out the hand you have been given. After your first hand of six cards has been played out, deal six more cards to each player and start again! Three rounds in you will again be passing on your cards, but this time to the right.

Once all twelve cards have been placed, it’s time to score.

There are lots of ways to score during this game and it’s well worth keeping a score card to hand throughout to keep an eye on. 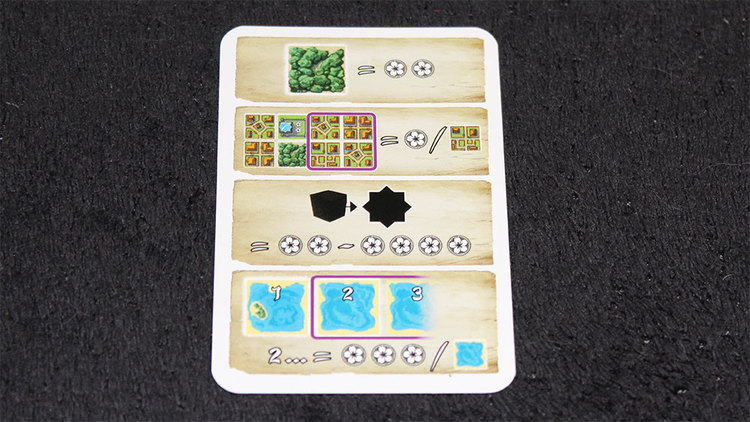 For each forest square you will score two points, your biggest connected city will score you one point for each square, each factory that can be provided for by a production square gets the amount of points shown and lastly your lakes score. The first lake square of each district is worth zero and each consecutive one is worth three points. The player with the most points wins! In the case of a tie the player with the highest number of fallow squares showing wins.

This is a great little game. I love trick takers but this has so much more, the city building element and the card passing ramp it up a few notches. Easily portable (always handy!) and it has a great two player variant that actually works and doesn’t feel forced like a lot of other variants.

My only criticism is scoring, there is a lot to add up and this really could have done with a little score pad, other than that we’re really enjoying Honshu!

UPDATE: The 2nd Edition actually does come with a scorepad, so my criticism is appeased.