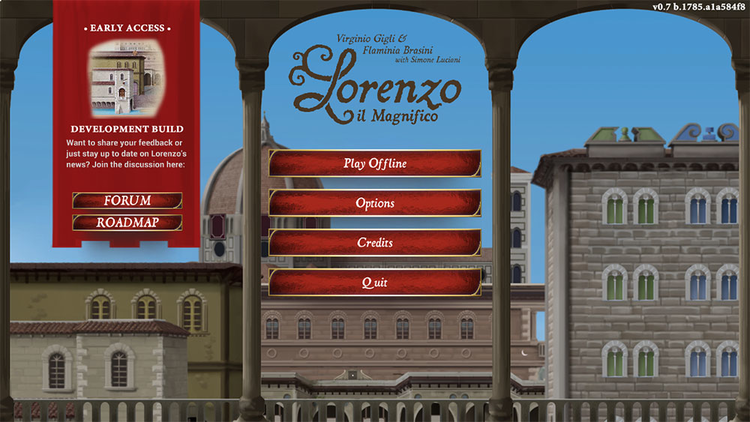 So, last week I talked about co-op games and this week I’m talking about video games. Strange things indeed from Redquarters! And no, this isn’t a review of Overcooked 2.

I’ve been looking at the Steam implementation of Lorenzo Il Magnifico from Cranio Creations. This was funded through Kickstarter and backers have had a chance to play it ahead of its actual launch on 30th July.

In Lorenzo, players take on the role of heads of noble Italian families. Your family members are your workers who you send out each round to work for you, but not all family members are created equally! At the beginning of the round, the start player rolls the dice which everyone then uses to assign ‘levels’ to their matching coloured workers, meaning all players have the same level workers for the round. This limits the actions they can take (some actions are just more efficient with higher-level workers) .There’s a lot going on in this game and a lot to keep track of so I was very interested to see it translate to the screen!

It’s been a while since I played so I loaded it up on Steam and went through the tutorial. This takes you through the actions that are available to your workers over the course of the game. As with all Euro games, the actions on their own are only a small part of the game, it’s all about the interactions between them that make the game what is it. Obviously, this is lacking in the tutorial and it’s only through playing that you really get to grips with hows things actually work. 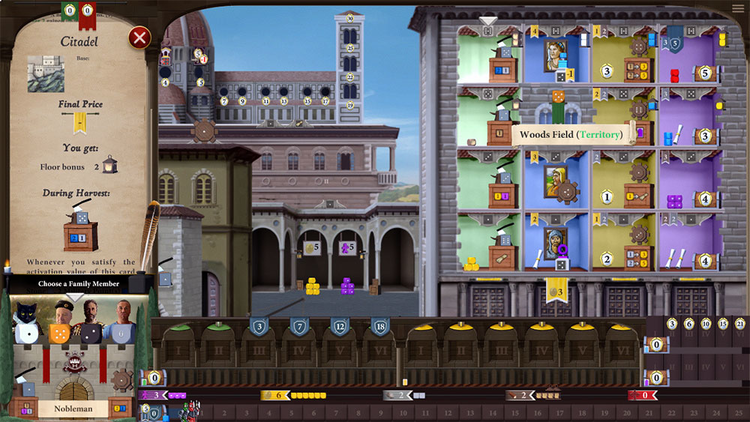 The screen is beautiful and highly thematic, showing the tower where you can obtain characters, ventures, buildings and territories from and the Cathedral is a monumental building looming in the background. That said the screen is very busy and there just isn’t room to show a lot of the information you need throughout the game. The insistence of presenting the city in the way it has been means that the screen lacks the detail at a glance. Your territories and buildings are only visible if you open up a tab accessible at the bottom of the board. This information is presented beautifully in a large tome which you can flip through to see the information. But when it comes to looking at what was your own player board it’s really not that clear.

Lorenzo is played over six rounds, three eras each with two rounds. These are represented by day and night on the app. The ‘night-time’ mode is quite dark and some of the iconography can get a little lost, on top of what I would say lacks clarity already. 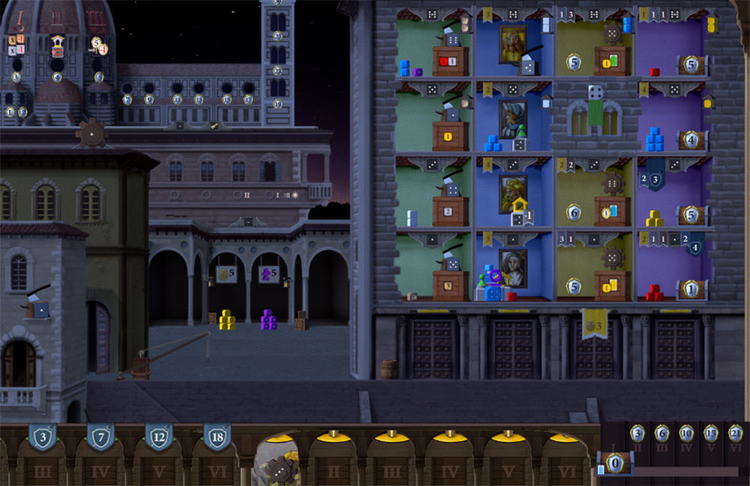 Once you know what you’re doing things aren’t so bad, you can run through the game fine. I would have to say that overall I wasn’t overly impressed. As someone who has used licensed sites such as Brett Spiel Welt and Board Game Arena who present games often with the original game artwork with the ability to zoom in and click on areas where a player would normally place their workers I would have said that would have been a better experience. I understand that licensing artwork for use in a Steam game might not be as easy as you might think. Perhaps as someone who has played and loves the tabletop version I am biased, a new player to the game is likely to struggle to get to grips with the gameplay as the options are hidden from view and clicking into 16 individual cards to see their abilities in full in the tome is going to become frustrating. If you really love the game you might stick with it but for me think I’ll be asking a few friends around soon to play the original.