Majesty: For the Realm 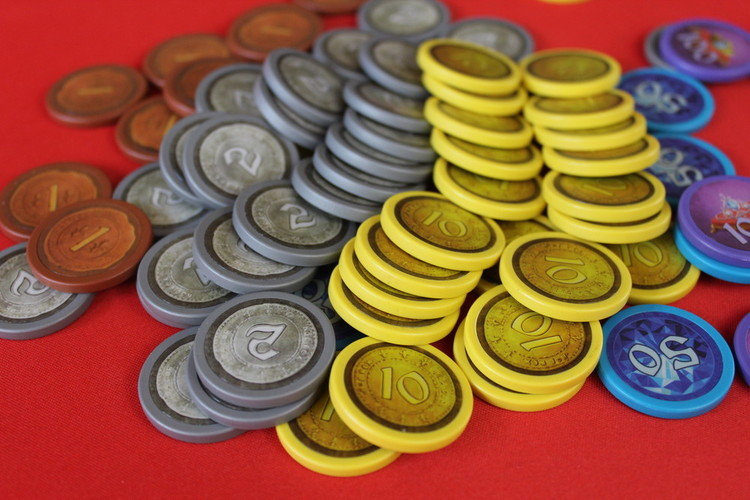 Oh, to rule for the day! In Majesty: for the Realm you can do just that. All players are competing for the crown, in order to win it they must establish the most successful kingdom. You will need tradesmen of all types from Millers to Princesses on your side - but so does everyone else! You may also need to defend yourself against incoming attacks or choose to attack first.

Majesty for the Realm was released at Essen last year and slipped under everyones radar (with so many new games being released, it’s no surprise!) It takes a few simple rules and mechanisms and turns them into a very neat, quick playing strategic game. 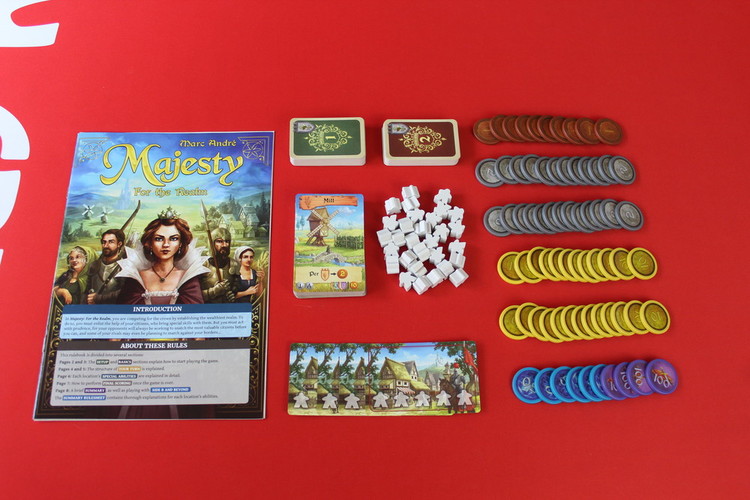 Shuffle up the worker cards and deal one out to each player, the player who gets the card with the Knight on it will be the start player. Give each player five meeples to place on the spaces on their worker card then give everyone a set of location cards (these are all the same). 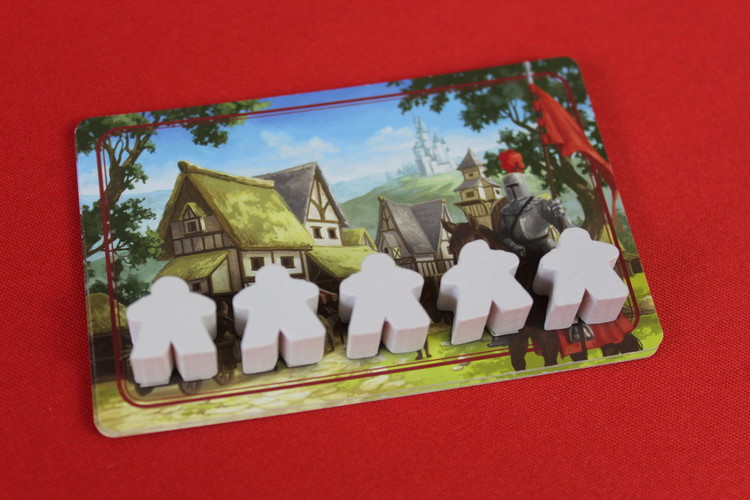 Each player lays these out in numerical order, for your first few games have all the A sides facing up. After a few games, you can turn them over to the B sides or shuffle and mix them up, just ensure every player has the same layout! 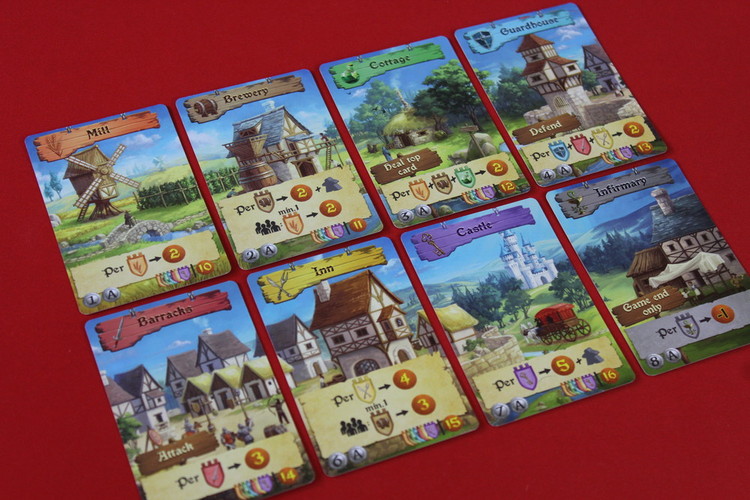 The game is played over twelve turns, each turn you will take and place one character in their assigned location card. Each character will grant a bonus when placed, the bonuses are different on the A and B sides of the cards, but here I am going to talk about the basic game - the A sides.

In your turn, choose one character that you want to take from the display. The card nearest the deck is the back of the row, furthest from the deck is the front of the row. The first character is always free to take. To take another card you must pay in meeples. Place one meeple on each card in the row that is in front of the one you want to take. You cannot take a card if you don’t have enough meeples. So, for example, if you wanted to take the third card in the row (here, the dual Guard / Noble) you would have to place meeples on the first and second card (the MIller and the Brewer) 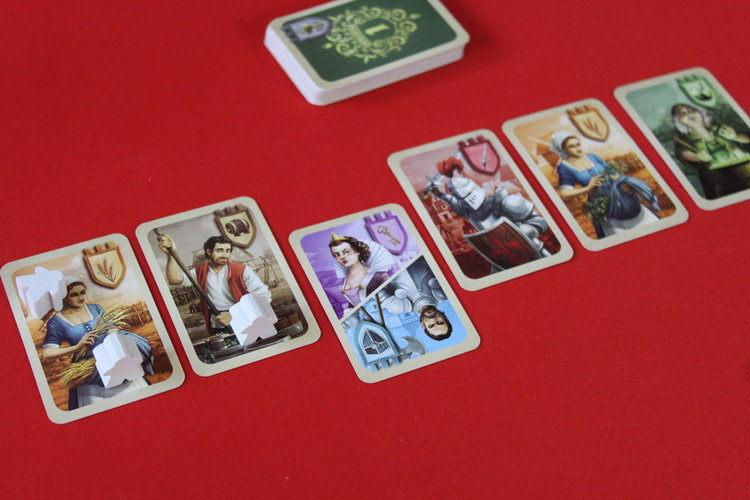 Most character card have a single character on them, there are also dual character cards, one on each half of the card. When you take one choose where to place it and put it face up in the appropriate location. If a dual card is removed from the Infirmary, you may choose again where to place it. If the card you wish to take already has meeples on it, you also take those and place them on your worker card. This can only hold upto five workers, any extra are traded back to the general supply for one point.

When you take the card, place it on the corresponding location card and take the benefits. 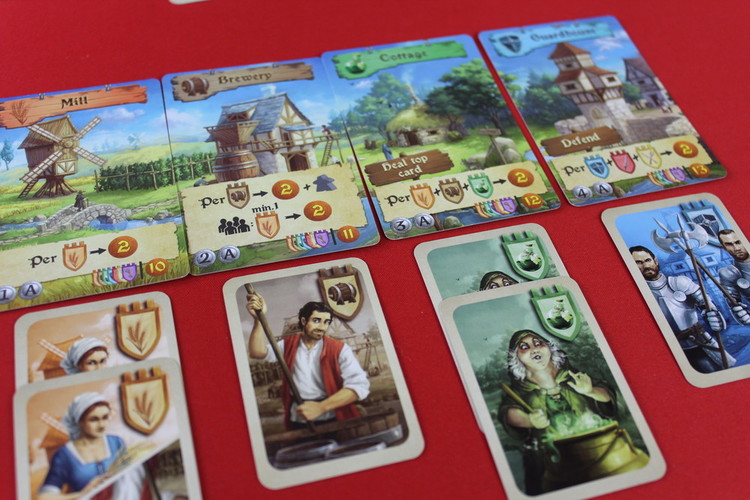 Millers (wheat symbol top left of the card) go to the Mill and give you two points for each miller there. So, the first one you place gives you two points, the second one four points and so on.

Brewers (barrel symbol top left) go to the Brewery, these give you two points and a meeple per brewer. Again, trade surplus meeples back to the supply for one point each. They also give two points to every player who has at least miller out.

Witches (potion symbol top left) go to the Cottage, these firstly let you retrieve a card from the Infirmary (more on that later!) but also give you two points per Miller, Brewer and Witch you have in your display.

Guards (shield symbol top left) go to the Guardhouse and give you two points per Guard, Knight and Innkeeper you have in your display. They also help you defend against attacks (keep reading!)

Knights (sword symbol top left) go to the Barracks. These give you three points per Knight but also attack the other players. If any opponent has the same number of Guards or more than you have Knights, your attack fails and nothing happens. If any opponents has fewer, your attack succeeds. That player must move their leftmost character card into the Infirmary (see, this is where those Witches come in handy!)

Innkeeper (utensils symbol top left) go to the Inn. These give you four points for each Innkeeper in your display plus give three points to all players who have a Brewer in their display.

Noble (key symbol top left) go to the Castle. These give you five points and a meeple for each Noble you have.

Your last location is the Infirmary. As stated earlier, this is where characters go after a successful attack. At the end of the game, you will lose one point for each card you have here. 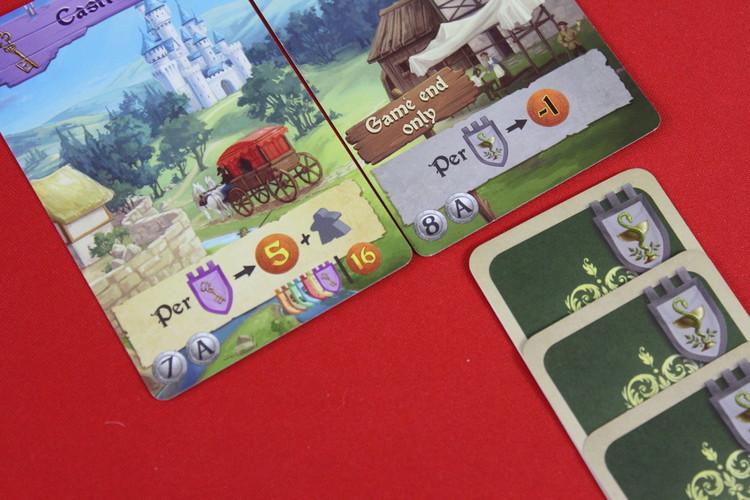 The character you place always counts towards the location bonus, however, cards returning from the Infirmary do not trigger the bonus.

After you have placed your character, slide the cards in the row down and add another card from the deck to the end. There should always be six cards in the display for a player to choose from.

When the last player has taken their twelfth character, final scoring begins.

Points are deducted for characters in the Infirmary.

Points are awarded for variety. Count the number of locations you have characters in and multiply it by itself, gain that many points. So, if you had characters in five locations, you would gain twenty five points, only in three locations, that would give you nine points.

Points are given for the majority in each location. In the bottom right of each card, there is a number in a circle, this is the points awarded to the player with the most characters in that location. Ten for Millers, twelve for Brewers etc. In the case of a tie both players receive this bonus.

Whoever has the most points is the winner and gets to wear the Crown* for a day (or until the next game!) *Crown not included in box contents, but is available separately.

Majesty: for the Realm is one of those games that makes you ask why has no one done this before? Simple mechanisms, quick turns and great replayability make this one of our most played games of the year. We’ll usually have multiples games as we can just flip some or all of the location cards to have a different game experience.

My only complaint with this game is the sheer amount of time bookkeeping takes compared to actual game play. Sorting out everyones points and keeping on top of the display is a job in itself, else things get missed easily - there is a lot of interaction. There really needed to be some five point chips to make things a little easier. The game plays so quickly otherwise!

There is quite a lot of spare room in this box so I am hoping for some expansions soon!