Posted on November 27, 2019 by Katrina Demeanour

When you say card game, you generally think of a small box, cheap, cheerful, with quick play. This is not that sort of game! In fact, I think Cranio Creations have done it a disservice by calling it so! There’s a fair bit to this game and I think it actually has less cards than the Lorenzo board game! 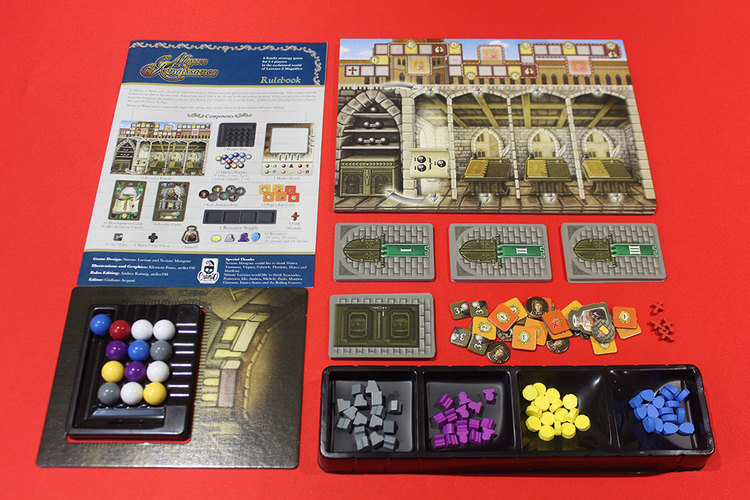 Place the resource supply tray on the table with the resources in the separate slots. Put the multiplier tokens by the side. Put the market tray in the space of the market board and randomly put twelve of the marbles inside it. The remaining marble should go on the slide around the edge.

Divide the development deck into twelve decks of four cards - as indicated on the back. You should have a blue, yellow, purple and green pile for levels 1,2 and 3. Shuffle each deck of four cards and lay them face-up on the table in a three by four grid. Level ones at the bottom, level twos in a row above and finally the level three cards. Shuffle the leader cards and place that deck to the side for now. 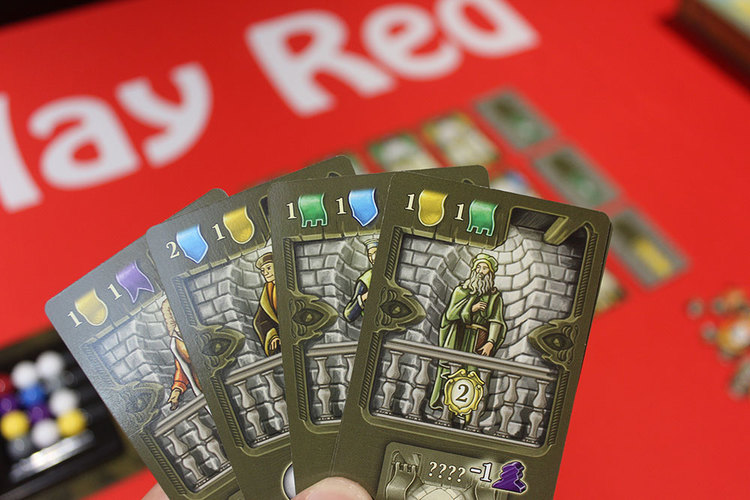 The black cross token and the solo action markers are only used for the solo play so pop these back in the box.

Give each player a player board, a faith marker - place this on the zero of the faith track and three Pope Favour tiles which go on the marked spaces of the Faith track.

Deal each player four leader cards. They choose two to keep face down in front of them and discard the other two. All leftover leader cards can go back in the box.

The starting player gets the inkwell token. In a three or four person game, the third and fourth players each receive one faith point as well as the second and third player starting with a resource of their choice and the fourth player receiving two resources of their choice. (chosen resources start in your warehouse, not your depot!)

Starting with the first player, players take turns performing one action out of the possible three.

Take resources from the market

Choose a row or column from the market and take the associated resources. Grey = stone, yellow = coin, blue = shield, purple = servants, red = faith and white = nothing. After taking resources, you must take the spare marble and insert it into the row or column you took resources from, pushing another one out of the grid.

When taking faith, simply move your marker one space up the faith track. All other resources taken must go into your depot. This is divided into three sections with one, two and three spaces only. You can only place one type of resource in each slot and each slot must contain a different resource. You may move resources around at any point in your turn. You must discard any resources that you can not or do not want to store, however, all other players receive one Faith point for each resource you discard in this manner.

You may buy a card from the display. The cost is shown on the top of the card. Resources can be paid from your warehouse, depot or a combination of both. Place the resources back in the general supply and put the card into one of the three slots on your player board. A level one card must be played into an empty slot, a level two on top of a level one and a level three on top of a level two (the colours don’t matter). Stagger the cards so it is obvious how many cards you have played. 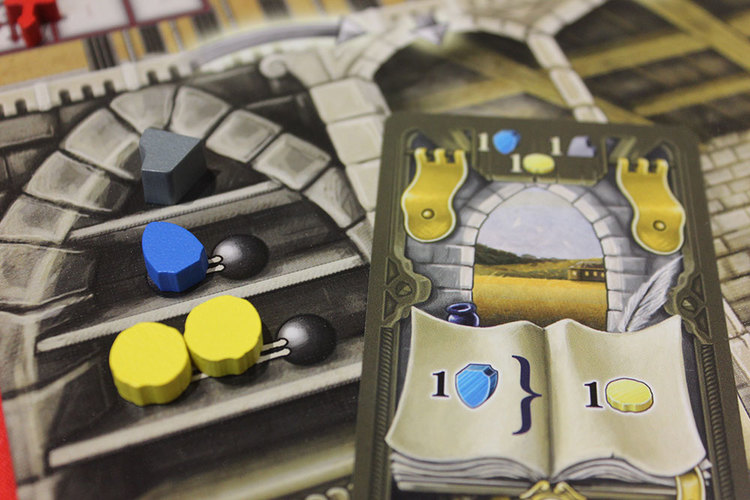 You can activate any number of visible development cards on your player board. Every card has a production power and each player board has a production power printed on it. All of them work in the same way though - pay the resources on the right to receive the resources on the left. Resources used may be from your depot, warehouse or a combination of both. Place all resources generated this way into your warehouse. Your warehouse has no restrictions, you may place any number of resources here and all types. You may only activate each ability once and all abilities are activated at the same time, meaning you can’t use resources generated from one card to activate another. You can never move resources from your depot to your warehouse or vice versa, using production abilities is the only way to ‘move’ resources.

In addition to your one standard action in your turn, you may perform a Leader action. You can discard a leader card to gain one Faith Point or if you satisfy the requirements shown on the top left of a card you may play it. Place it face up next to your player board, it will now give you a special ability for the rest of the game. 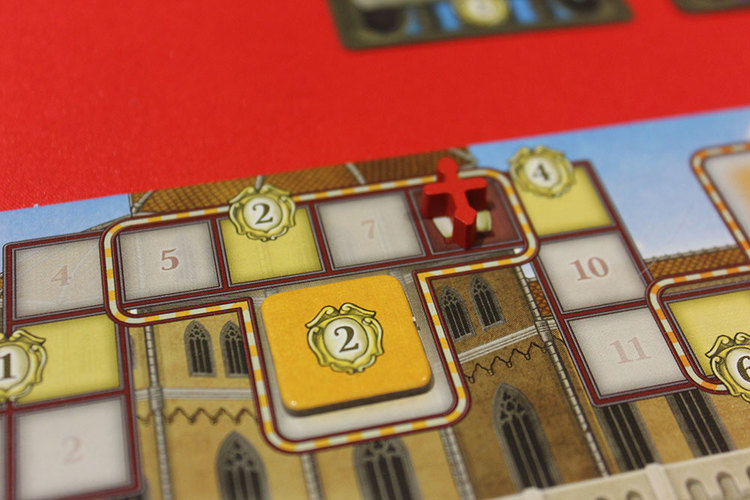 During the game, there will be three Vatican Reports, these are marked on the Faith track. When a players Faith marker is on a space within or past one of these areas, a Vatican Report occurs. All players check to see if their Faith Marker is in (or past) the active section. If so, turn the Popes Favour tile in that section face-up. If your marker is before the active report discard the tile from that section. Each section is only activated once in the game, by the player who is first to reach it. At the end of the game, you will score points for each face-up marker on this track.

The game can end in one of two ways. Either when a player reaches the last space of their Faith track or when a player buys their seventh development card. Play to the end of the round so everyone has the same number of turns. Then players calculate their victory points.

Each development card gives you the indicated number of VPs, the final position of your marker on your Faith track (as indicated on the board), VPs from any Popes Favour tiles, each leader card and each set of five resources gives you one VP.

The player with the most VPs wins!

Masters of the Renaissance has some familiar concepts if you’ve played the Lorenzo Il Magnifico board game, however, it is a very different game. The market phase combined with limited storage in your depot leads to some tough decisions. At times, those white marbles can save you. However, there are leaders that give you resources for white marbles so it’s easy to get overwhelmed and end up giving away lots of Faith points to your opponents. Generating an effective engine using only three cards and limited space is tough! This is a great thinky game that plays in under an hour and turns are pretty quick so it’s low on the downtime. We really enjoyed this - a great inclusion in the Lorenzo family!

When you say card game, you generally think of a small box, cheap, cheerful, with quick play. This is not that sort of game! In fact, I think Cranio Creations have done it a dis... Continue reading →