Posted on November 01, 2017 by Katrina Demeanour 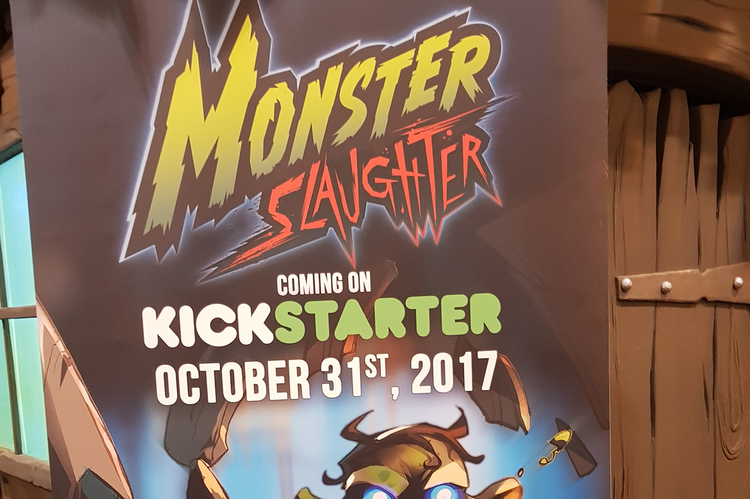 Halloween is a time when the walls between our world and the next became thin and porous, allowing spirits to pass through and yesterday the monsters came back into our world through the Monster Slaughter Kickstarter Campaign! I had the chance to play this over the Essen Spiel weekend and loved it, so here is my run down on it.

In your box you will get:

Set the board up and place all the doors on, shuffle up the cards and place the appropriate number on the spaces for each room, then randomly place one student card on the top of each deck, this determines which student is hiding out in each room. Place the coloured student cubes on the appropriate health point square on the board. 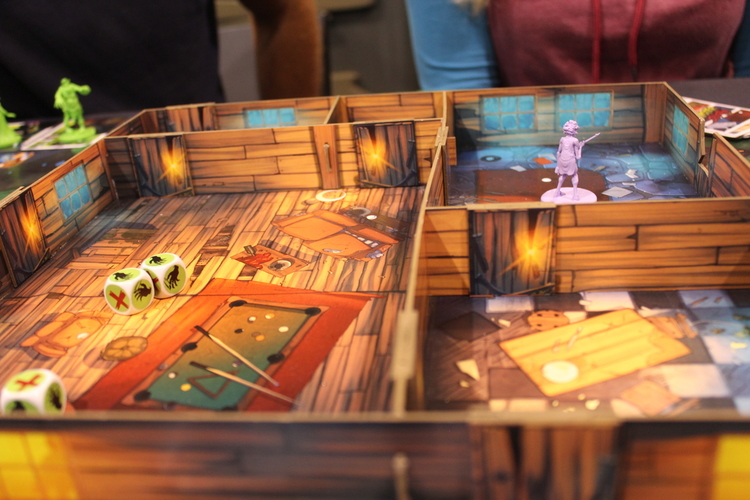 Each player chooses a set of monsters they wish to play with, takes the appropriate figures and cards, they also take a set of student tiles and a ‘target’ token. Place your student tokens face down in front of you in the order you think they are going to die, then place your ‘target’ token on the one you think you will kill yourself. Each Monster card shows the amount of actions that monster has each turn, the number of dice they roll for a challenge and their special ability. 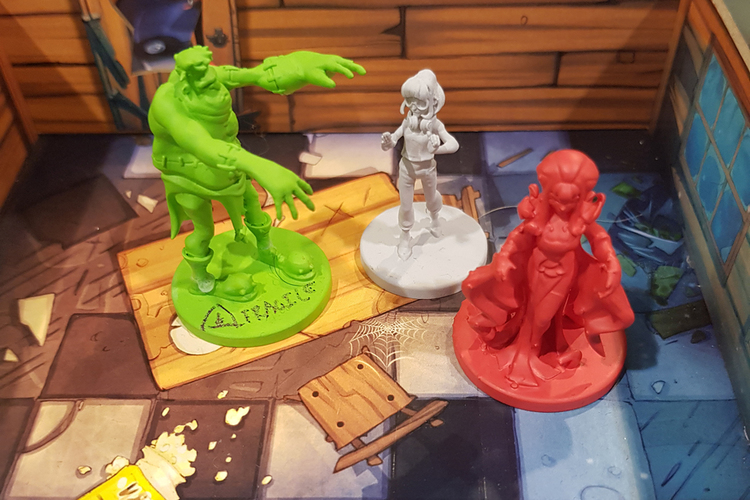 Monsters are played one character each turn and their card is then flipped to show they have been used, only when you have played all three can you re-use any of them.

At the start of every round (except the first one) the top card of the action deck is revealed, this might make life easier or harder for the students or the monsters. This effect remains in play until a new event is revealed at the start of the next round.

Each monster gets one free move action a turn in addition to the actions shown on their card. To enter a new room, they must first roll the ‘monster dice’ one success breaks down the door, which you put to one side as it will be worth one point at the end of a game. You may then use one action to ‘peek’ inside the room, meaning you can look at the top card to see which student is hiding out in there, however, after this action the deck gets shuffled up. (the student has found a better place to hide after being spotted!) You can also use an action to search the room. Roll the appropriate number of monster dice and draw a card from the room for each success. If you draw a student card, they appear in that room! Place the mini next to you and you can begin attacking them if you have any actions left or if you want to! (they might be the person you put as being killed last!) 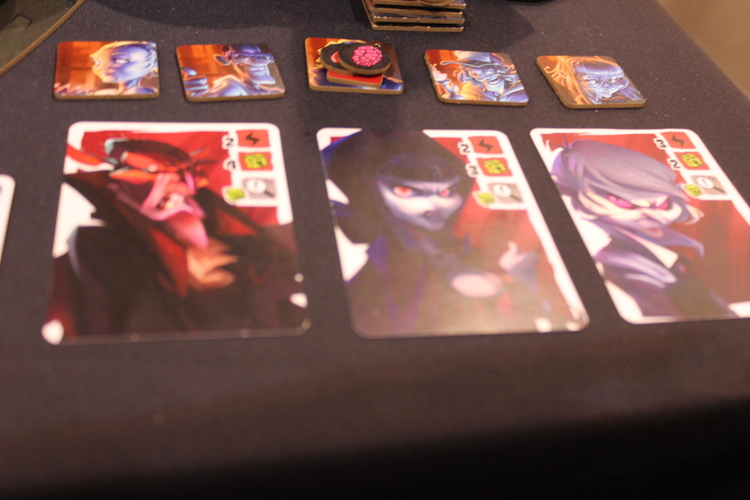 To attack a student, first declare you are attacking them. All of the other players gets a chance to add them using weapons (cards) they may have drawn. This gives the students a chance to defend them self against the monster. Roll the appropriate number of monster and student dice, count up the number of successes the monster gets and subtract any the student gets, the student then takes that many points of damage (don’t forget the students have special abilities too!) You then earn one flesh token for each point of damage you managed to inflict - these are worth two points at the end of the game. Also, move the appropriate coloured cube down the students health track. If you are lucky enough to completely kill a student you also get a bone token (also worth two points) If a student dies, play temporary halts while everyone checks the death order they selected at the start of the game. If you guessed that particular student's death placement correctly, you gain a brain token (worth three points) If you killed them ands they were your target, you also gain a ‘favourite meal’ token worth an additional five points!

Then, once that has been resolved, play continues with the active players turn.

When each player has used all three of their monsters, they turn the cards over and begin to play with a complete family again.

The game ends either when all five students are dead or at the end of the twelfth round, add up all your points and the player with the most is the best monster! 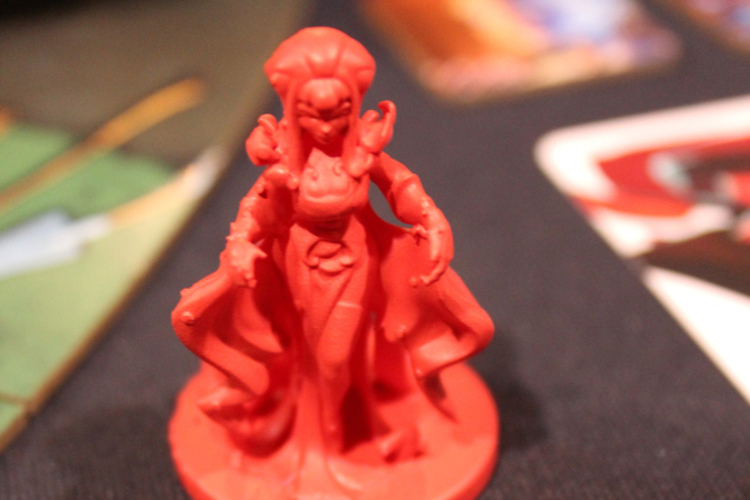 I only got to play one game of this at Essen Spiel and it was a lot of fun. The minis are great and the weapons are brilliantly thematic - garlic gives a student dice against any monster, but extra against vampires for example. The copy I got to play was a beautiful prototype and from looking at the Kickstarter, things have changed a bit and it seems extra rules have been added, but the amazing artwork is still the same. The current included families are: Vampires, Werewolves, Golems and Zombies but stretch goals in the campaign are hoping to add aliens at least. There are some elements of messing other players up but not enough for it to be a proper ‘take that’ game. 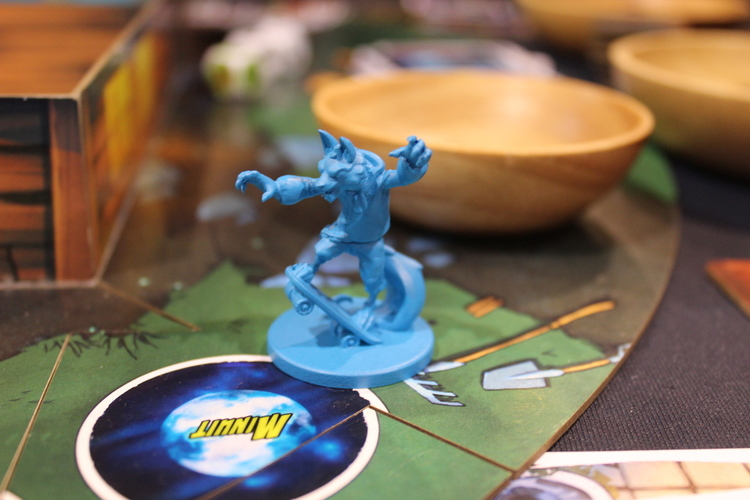 In a world where a horror theme means zombies or Cthulhu, Monster Slaughter is a breath of fresh air!

Check it out on Monster Slaughter on Kickstarter