Posted on November 10, 2017 by Katrina Demeanour 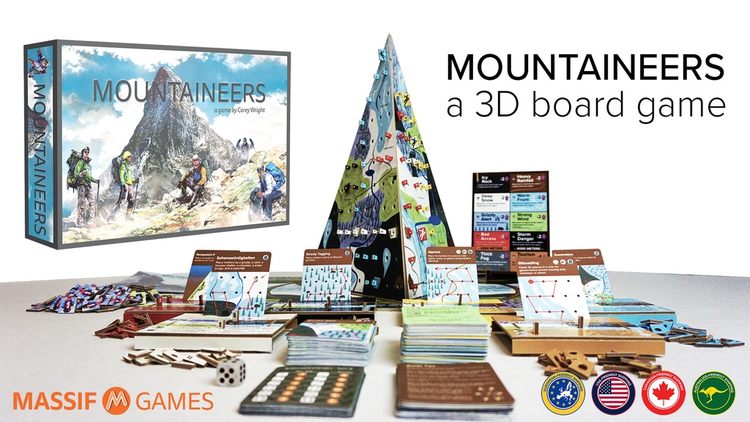 Standing 18 inches tall and able to rotate 360 degrees, Mountaineers is an impressive looking game, not only that, it is thematically accurate and has great gameplay. With the weight of this box, you’d be mistaken for thinking there was a real mountain inside, but no, just a huge cardboard one!

Please note all pictures shown are of a prototype copy so may vary from the final version.

In this beast of a box you get: 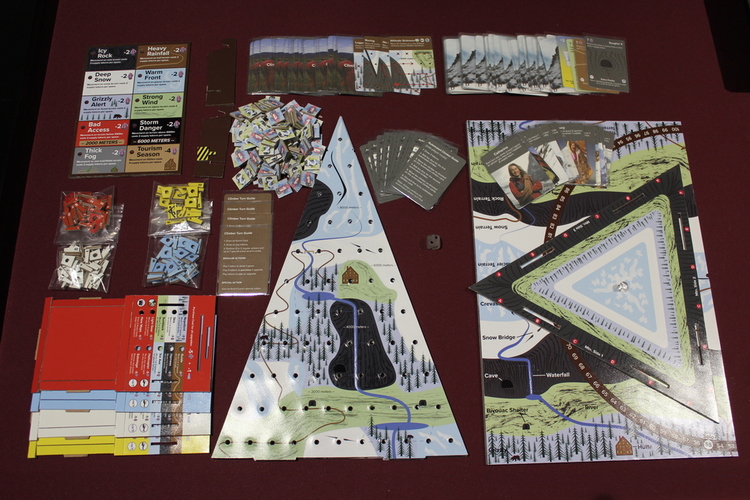 Randomly choose which sides of the mountain you want to use and build it! This is actually far easier than I was expecting. Set up the conditions board in the stand and place the marker nearby.Shuffle and prepare the event cards according to the number of players in the game. For each player use 1 ‘conditions change’ card and 9 standard event cards ie for four players you will have a deck of forty cards. Give each player their route markers, climber, upgrade board and route locks. Then deal out six climbing routes to each player. They must keep four and discard the remaining ones back into the box. This is the time to have a good look at the mountain, spin it around and have a good look at all sides as some of these will be easier to complete than others. Randomly deal all players two character cards, they can choose between the four available and place them into the slot on their upgrade board. 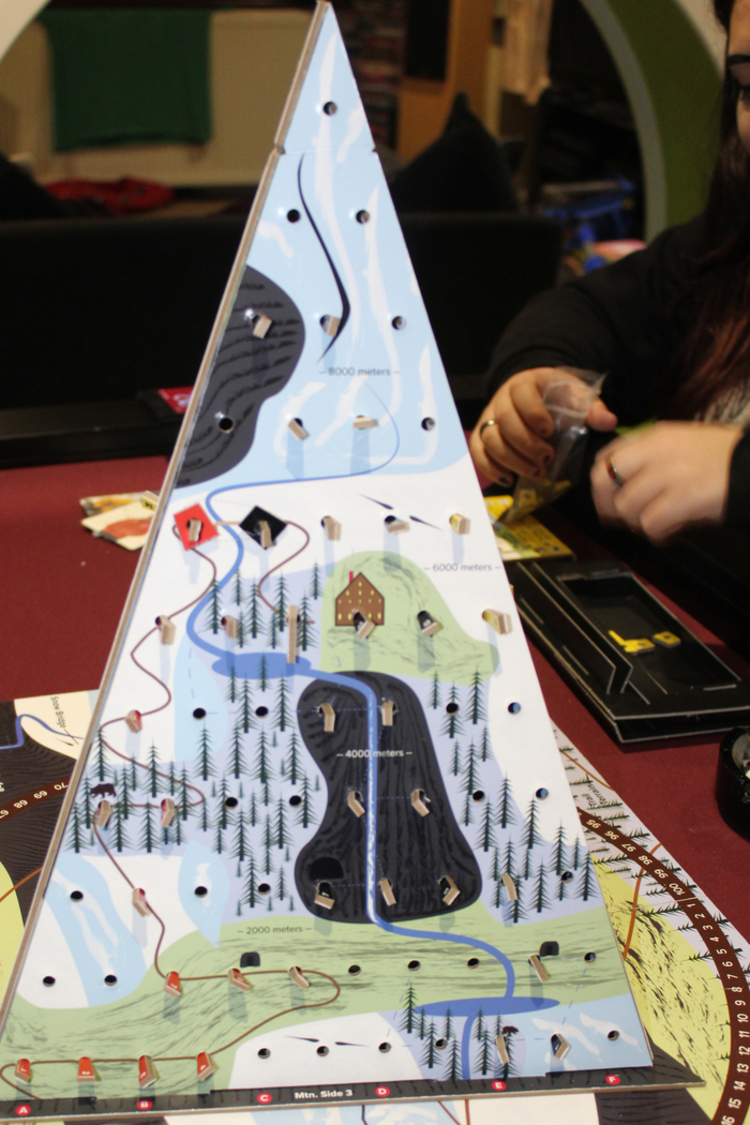 The start player is the last person that has climbed a mountain! (or done randomly if you have a group like ours lol) Then take it in turns to place your climber marker in a position at the bottom of the board.

A turn consists of two stages:

Draw an event card and resolve it. All players gain or loose supplies as marked in the top left of the card.

Read the top of the card aloud for all players. If it is a ‘conditions change’ card, mark it appropriately on the conditions board and make sure all players know what the new conditions are. At the bottom of the card is a bonus for the active player, if the card was a conditions change card you must use it or lose it at the end of the turn. If it was a normal event card, lay it face up on the table next to you and it can be used later on during the game. Some of these even give you end game points. 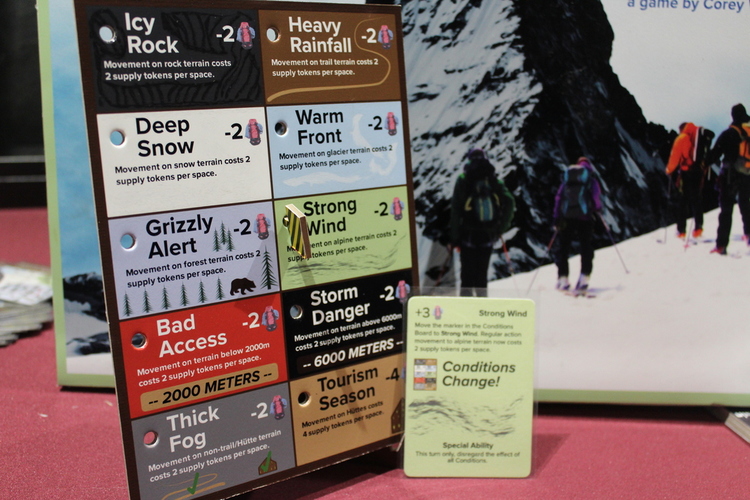 Regular and Special Actions - During your turn, you may do between 0 and 2 regular actions. You have three choices:

Climb - to climb the mountain you must pay one supply token and can move to any of the six surrounding points, some of these may even be on a different face of the mountain. Don’t forget the conditions board though as climbing may cost you more than the standard one supply! Pay the required supply token, move your climber to that position, you may then place a route marker in the position you just left. You may also pay an additional supply to place a lock on that route marker (this stops it being sabotaged by other players) When placing route markers, start with the lowest number and work up, this will help you with end game scoring.

Purchase Climbing Upgrades - These are essential to the game. You must pay for the upgrade before being able to use it. All upgrades cost five supplies to purchase. Once you have paid for an upgrade, use the highest number route maker you have to mark it as purchased.

Use a Climbing Upgrade - After an upgrade has been purchased, you may spend one of your regular actions to use it. Pay the cost indicated on the board and use it. You may use as many upgrade actions as you can, as long as they are paid for, additionally, you are not required to use the total movement. Climbing upgrades override the current conditions, but do not override text at the top of an event card. 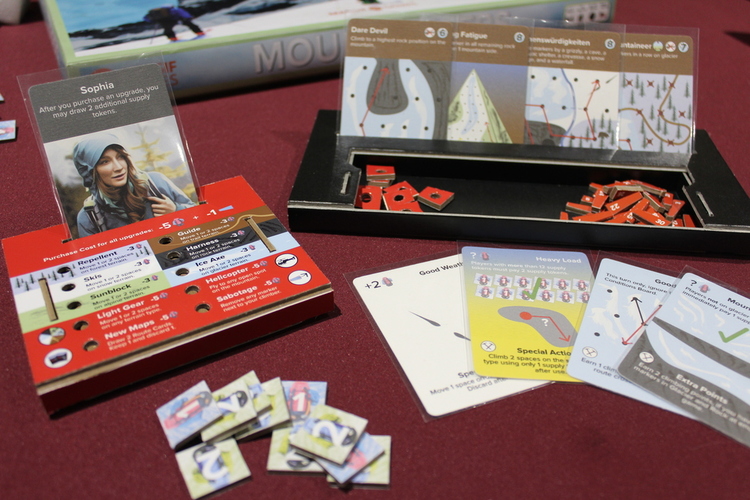 A game ends after all the event cards have been drawn (so ten turns each) Players should use the circular track on the board base for scoring, Add up points from your route cards, one point for each marker on the mountain and special event cards. Minus any negative points from cards or upgrades.

Routes that were completed, then sabotaged during the game will give you half points. 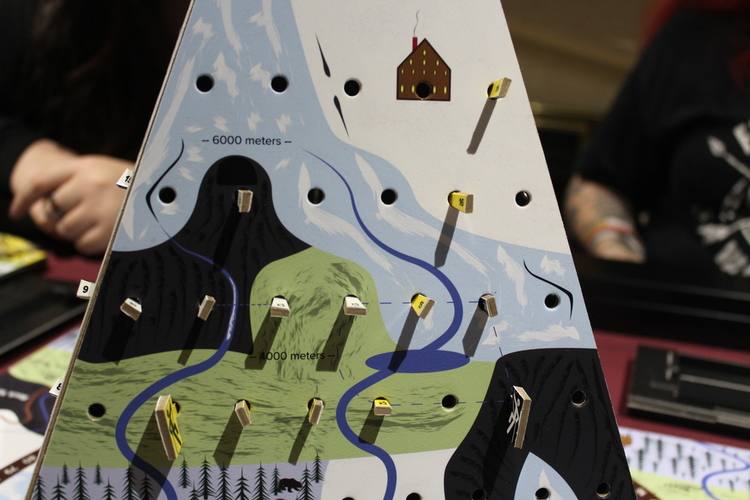 There is a lot I like about this game! Firstly, it just looks amazing, I also love the fact it’s not just a simple race to the top - there is planning and strategy behind every move you make. Corey Wright, the designer of the game, loves climbing and his love of the sport shines through in every aspect of the game. There are quotes from mountaineers, survival tips and all sorts in various parts of the game (the back of the board has some amazing quotes!) The characters are all based on real climbers (with a great selection of women). All of this just helps the theme shine through.

The baseboard has every type of terrain and feature detailed on it so you know exactly what you are looking for and is on both sides of the board, so no fighting over who gets to sit the right way round. It’s attention to detail like this that means you have a great game!

We’ve only played this four player, with some games we had almost no interaction and were all on different faces of the mountain, the last game we played it seemed that three of us all wanted the same spots on the board, so player interaction varies a lot.

There are three versions of the game available to buy on Kickstarter, the ‘basic’ game that comes with everything described above, the ‘deluxe’ edition that gives you extra mountain faces, 5-6 player pieces and additional routes, events, and characters, then there is the ‘collector's edition’ that adds swanky card and component trays and also has laser engraved wooden pieces!