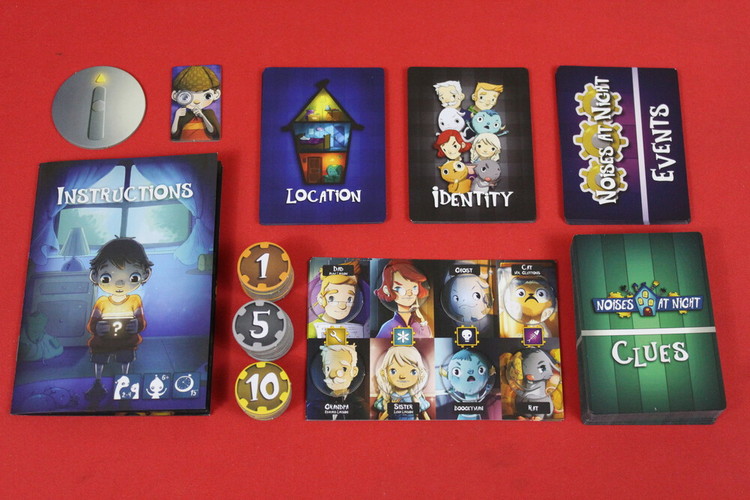 I don’t dislike social deduction games, after all, we love Shadow Hunters I dislike the need for huge numbers of players, apps and all the organisation that goes with it. Noises at Night is a super fun social deduction game that plays with between 2 and 4 players in just 20 minutes. It even plays great at just two players!

Give each player a player mat that shows the scoring icon for every character and one victory point. Deal every player an identity card face down, they may look at this but not reveal it to other players. Place the leftover identity cards to one side face down. Place the bathroom location card in the middle of the table. Shuffle the rest of the location cards and deal out four in a line next to the bathroom. Randomly place two identity tokens on each room that isn’t the bathroom, ensuring that there are not two characters that score on the same symbol both in the same room.

Shuffle the event deck and put it to one side, then shuffle the clue deck, deal four cards to each player and also put that to one side. Place the timer handle on top of the timer card and set it to the correct number of rounds depending on player count (7 for 2 players, 6 for 3 and 5 for 4 players.)

Give the first player the start player token. You are ready to play! 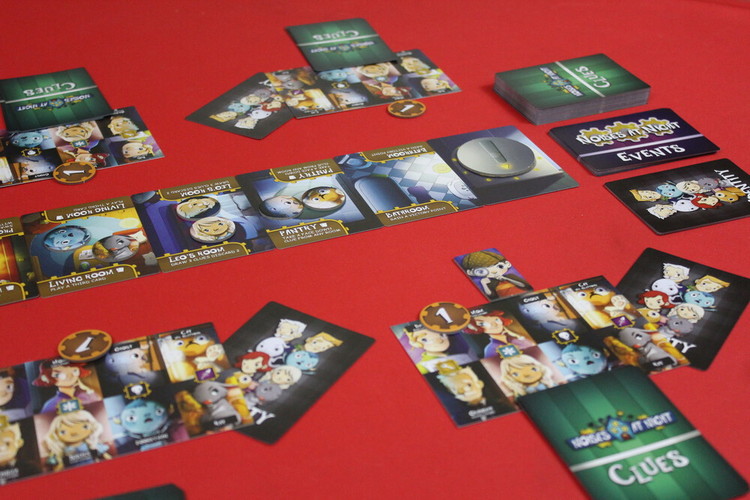 In a players turn they will place two clue cards, one at a time, either face up or face down. These can be on the same or different locations. If a card is placed face down, trigger the ability of the room before playing the second clue card. If the card has an ability, trigger the card's ability before moving onto the ability of the room. Note that some rooms need both cards to be placed there to trigger their effect - these rooms are marked with a symbol showing two cards. Once every player has played two clue cards and all effects have been resolved, players move onto the guessing phase for the turn. 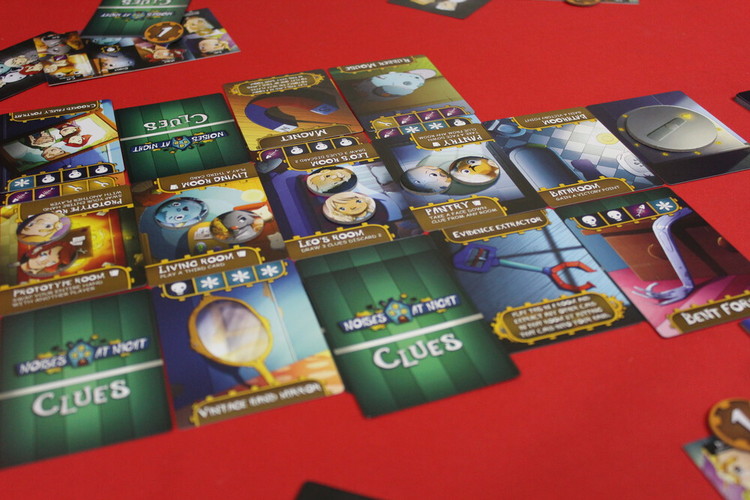 Beginning with the starting player, everyone may take a turn guessing the identity of one of the other players. If a player guesses correctly, they gain a number of points equal to the current round and the other player must reveal their identity. If they made an incorrect guess, the other player receives those points. If your identity is revealed you still remain in the game and play as normal, except with your identity card face up. After everyone has had a guess (right or wrong!) reduce the timer by one and draw an event card. This will be something that affects all players. After this has been dealt with, pass the start player token counter-clockwise and start a new guessing round.

When the timer reaches zero, the game ends and final scoring happens.

Score one point for each card in your character's location. Then reveal any characters that weren’t revealed earlier in the game. Every character has a scoring symbol - this is shown on the player overview card and on the identity cards. Each player scores one point for of their scoring symbols that is face up on the table. 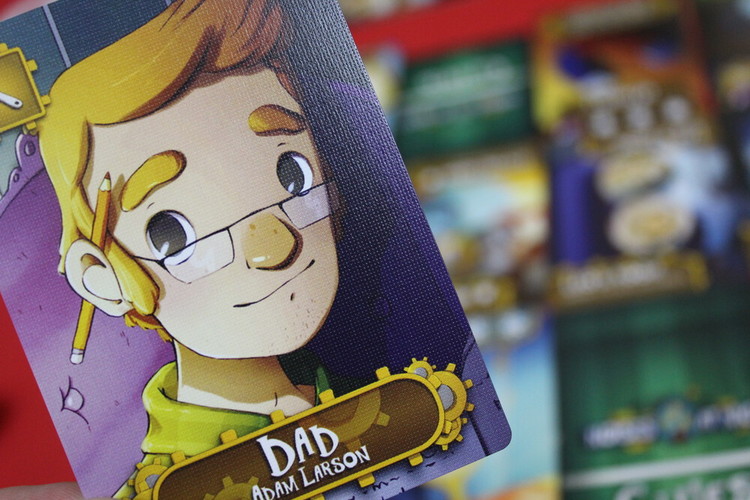 The player with the most points wins!

Review copy provided by B and B Games Studio