Posted on October 09, 2019 by Katrina Demeanour 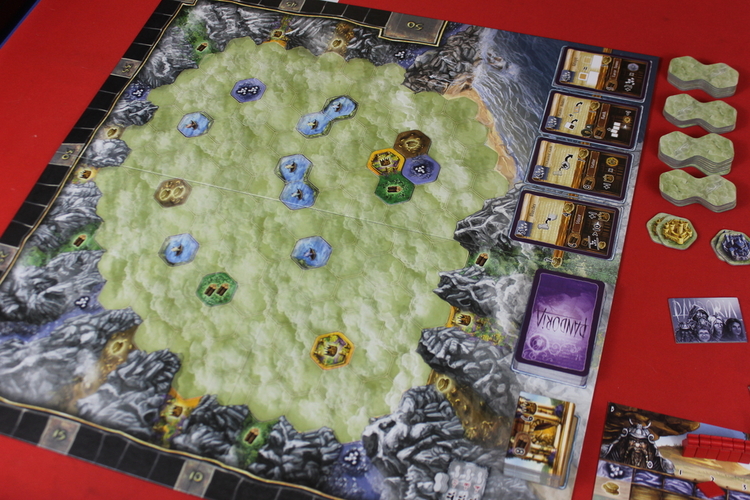 The people of the five realms have lived in peace for years. Elves, Mages, Dwarves, Halflings and Humans side by side, with, well, maybe a little competition! That is until the Goblin Hordes attacked, unleashing a devastating attack that led the remnants of the realm to flee by ship. And so, they discovered a new land, Pandoria.

In Pandoria, each player plays as one of these five tribes, trying to survive, grow and gain the resources necessary to thrive 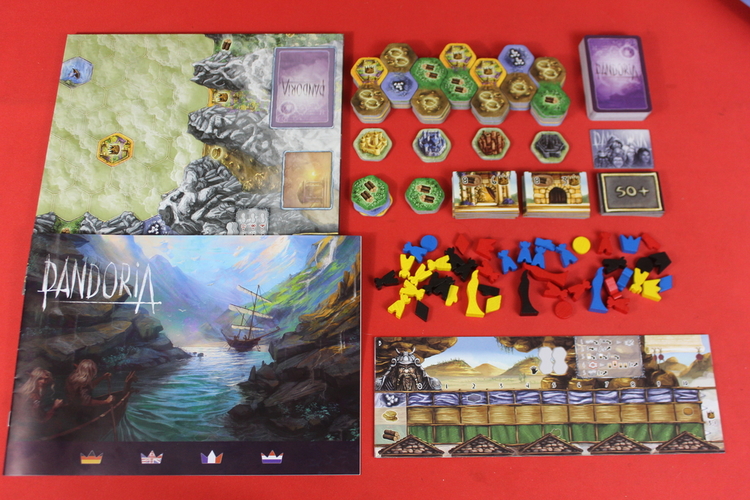 Place the board in the middle of the table. Randomly place the two starting double tiles on the marked spaces on the board. Shuffle the five tableau cards and deal one to each player. The game has two ‘modes’ of play, place side A for the beginners game and B for the advanced game. Make sure everyone has the same side showing. Shuffle the cards and deal four cards to each player as their starting hand. Put the face-down deck on the space on the board. Draw the top four cards and place them face up next to the deck, in the market. Each player chooses a colour and takes all the appropriate pieces in their colour, along with the two castle tiles.

In a two-player game take all six meeples, in a three-player just take five and with four players just take four. 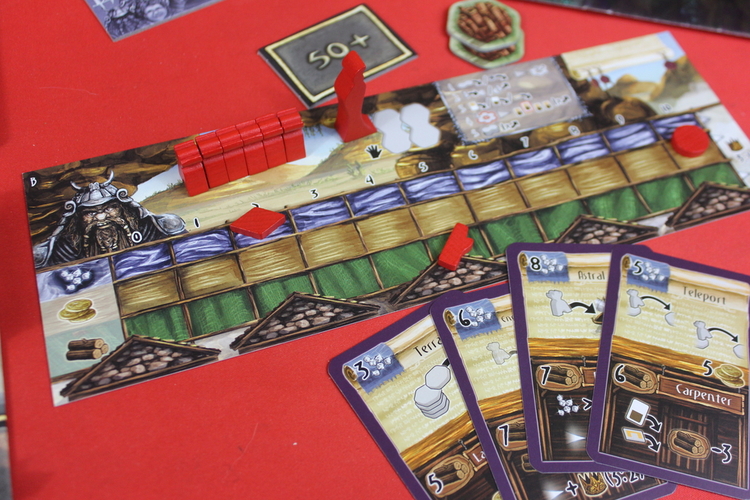 Place the three corresponding resource markers at their starting point on your tableau. These differ for each tribe. Shuffle up the eight single tiles and place them in a stack to the side - these only come into play with specific spell cards. Shuffle up the double tiles and remove some dependant on the number of players, put four back in the box with four players, eight with three and twelve with two players. Each player then draws one tile into their hand that they keep hidden from the other players. Place the monuments in the space on the board with the highest value on top. In a three-player game remove one tile of each value, for a two-player game remove two of each. Place the points tiles next to the board, you are now ready to play.

In a turn, a player places their double tile or one of their castles on the board so that it is adjacent to at least one side of another tile. It must not overlap another tile and cannot be placed on lakes, exit paths or other pre-printed spaces on the board. If this encloses a region, remove all players' figures from it and return them to their owners. You may then place or remove one of your figures onto the tile you have just placed. If you have no other figures left, you may place your leader. You may also choose to remove one of your figures from the board. 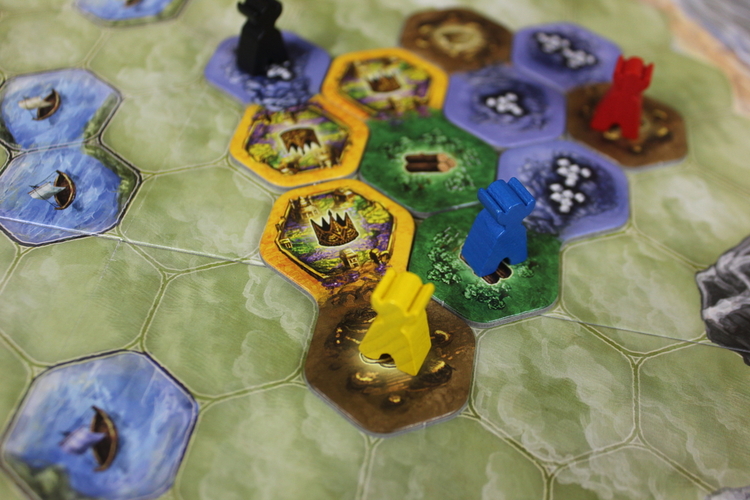 Then you can play one of your cards or erect a monument. Cards may be played as either spells or buildings. If playing a building, pay the cost as shown and move your wood marker down on your track for the amount paid. Put your card underneath your player board in one of the five available slots so just the building half is showing. You may not build more than five buildings, but you can always build over one of your existing ones. In this case, you only need to pay the difference between the existing building and the new building. The building's effect stays in play for as long as the building does. You may never have two buildings with the same name in your tableau. Alternatively, cards may be played as spells. Again, pay the cost as shown (this time in crystals), move your marker down and then place the card under the top right of your player board so just the spell part can be seen. Use it’s one-time effect immediately. To build a monument, you must build over an existing building. You must pay eight wood, minus the cost of the building and place the monument tile on top of the building. Then score the applicable number of points. 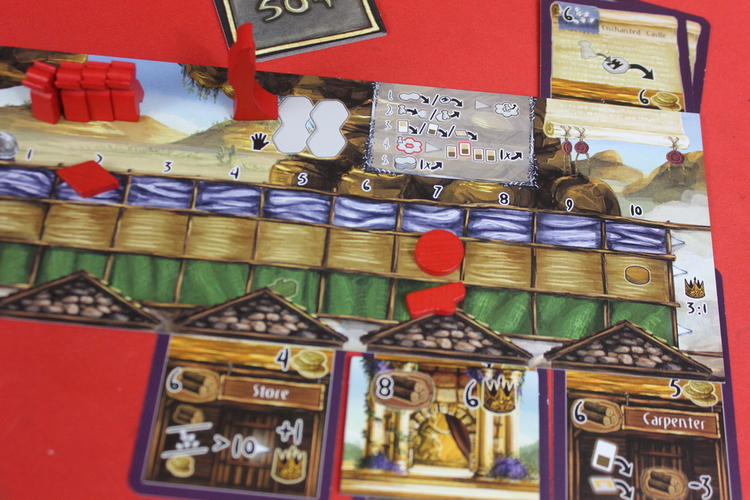 If you closed one or more regions when placing your tile, these will then be scored. All players with figures adjacent to the area that has been closed will score, regardless of if it’s their turn or not. Add the number of resources from all spaces in the closed region and then multiply it by the number of figures each player has adjacent to that region (A leader counts as two) Players then receive that number of the specific resource. You may only hold ten of any resource at a time, extra are lost. However, you score one point for every three resources (rounded down) that you gain over ten. After all players have scored, the active player may buy a card from the marketplace paying the gold cost indicated. You may only buy a card if you closed a region in your turn.

At the end of your turn, draw a new tile ready to place next turn.

The game ends at the end of the round in which the last double tile is drawn. Play continues to the player on the right of the starting player.

Most points are awarded during the game. However, players also receive one point for each card they have left in their hand and resources grant points, again one point for every three resources of one type (rounded down) Some buildings may also grant additional bonuses. The player with the most points wins!

There are actually two game modes in Pandoria. In the beginners game, players have no special abilities, they just start the game with a specific building and two cards specific to their tribe. In the advanced game, each player uses the special ability of their tribe as shown on the reverse side of their player board. Sadly this is where the differences in the tribes ends, they make little difference to gameplay. Overall the game feels very abstract and seems to be a pattern builder meaning a lot of the flavour is lost. Of the games we played it appeared that one strategy overrides the entire game, whichever player followed that approach won each time by a clear margin. With more plays this might not always be the case, and perhaps different player counts make the difference. I am interested to see what the Pandoria Artifacts expansion adds to the game and if it fixes these problems. 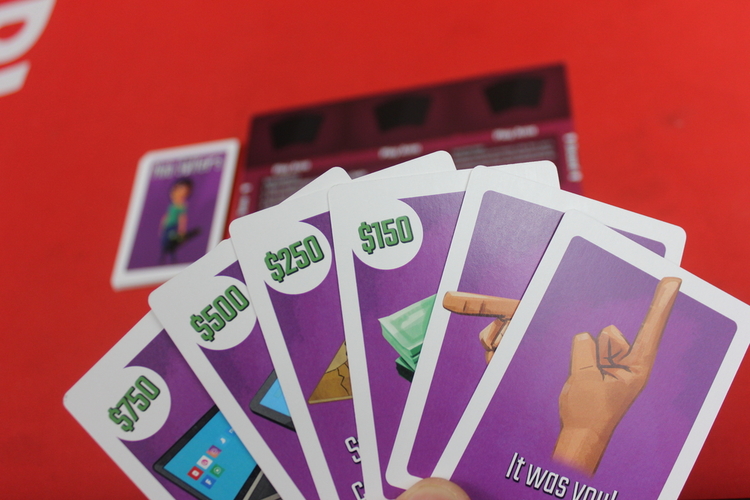 OK, so everyone knows I’m not a fan of children so would be the most unlikely baby sitter ever! However, what if it were a bit more *cough* ‘lucrative’ shall we say? In Mob Si... Continue reading →