Posted on October 23, 2017 by Katrina Demeanour 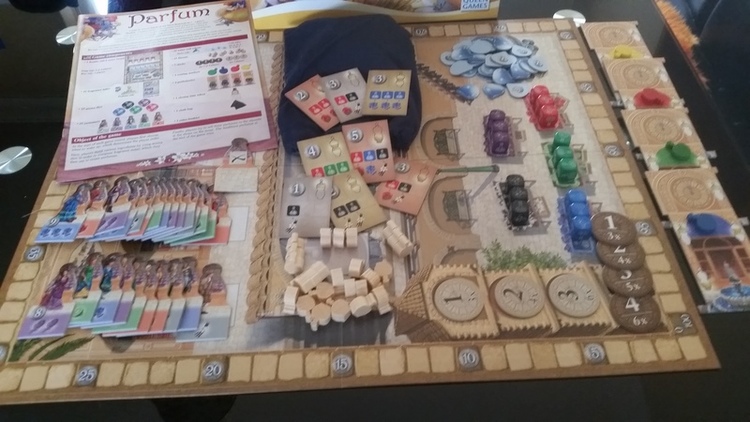 Imagine the sights, sounds and smells of Paris in the 19th Century. Now, concentrate on the smells, because unsurprisingly that is what Parfum is all about!

When you open the box, don't be overwhelmed by the number of components, this is a much lighter game than initial impressions give!

The aim of the game is to use fragrant notes to create perfums containing the ingredients that the current buyers want. Each perfume is made up of either two or three fragrant notes (top and bottom or top, middle and bottom)

Each round consists of three phases: Wake up, create perfumes and sell perfumes. In the wake up phase players take it in turn to decide when they want to play in the round, 1st, 2nd etc, however, the number of actions decrease the higher up you play. For example in the 4 player version, player one gets 3 actions, player 2 4... 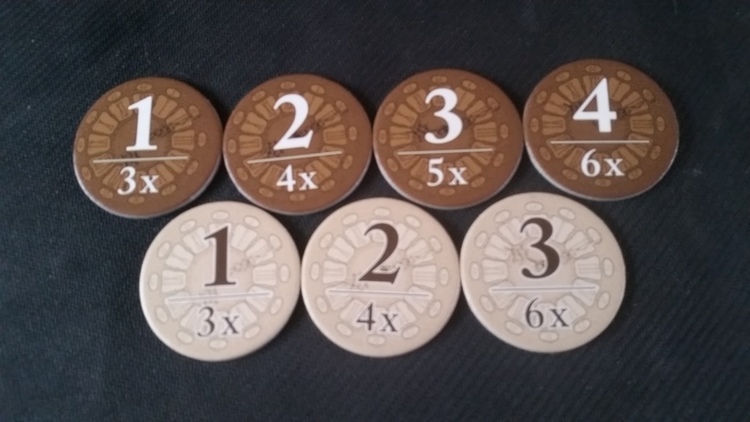 This is actually one of the trickier parts of the game, you may see something on the board that you really need so want to go first but the number of actions means your chances of getting it are lower. The player currently in last place chooses first so it's not advantageous to be a runaway winner during the game.

Next is the create perfumes phase where you will use your assigned number of actions. There are three things you can do here: take an aroma dice, take a water token or restock one of the fragrance notes (usually in the hope of getting something you need!) After choosing your actions you will try to claim fragrance notes using the aroma dice you previously choose. The dice show flasks or flies, the flasks are a successful distillation and the flies are a fail. You can use your water tokens to either re-roll or change your dice rolls. You can use one token to either re-roll all flies of the same colour or re-roll all dice. Alternatively you can discard two tokens to rotate any dice from a fly to a flask. If you successfully distill the aroma required for a fragrance note, you can then claim it. When claiming a fragrance note you also gain the number of points indicated on the tile. 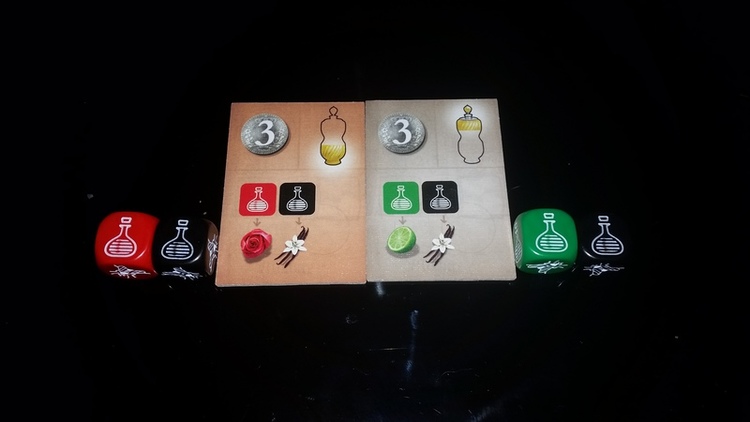 If you complete a perfum you can then claim flacons. For a two part perfume you get two flacons, and a three part, three flacons. Now your perfumes are ready to sell. After everyone has had their create perfumes phase you will move onto the sale phase. Taking it in turns, each player will get the chance to sell to the current buyers for the amount of points indicated or else sell to a bargain hunter for two points for a minor or three points for a major perfume. There are two selling rounds but the buyers don't restock until the end of the round so your choices will be limited second time round. When you sell the last flacon of a perfume is sold you receive two water tokens. 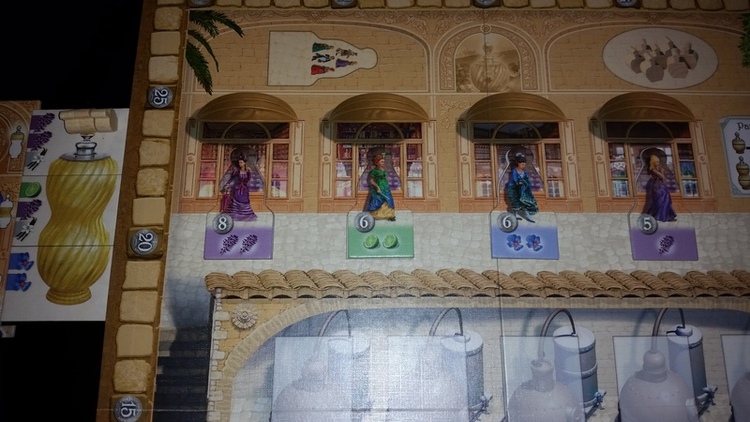 At the end of the round the fragrance notes and customers are restocked and the round starts again with the wake up phase.

The game ends when the 'closing time' token comes up (this was put five customers from the bottom at the start of the game) or when the fragrance notes run out.

Finally all players reveal any points they may have on water tokens and add it to their total.

While Parfum is advertised as a 2-4 player game, the two player version involves each player taking two turns per round so feels clunky and doesn't really work for me so I would advise it as a three or four player game only. Parfum is a solid, but quite simple euro game, sometimes with tough choices to be had. The turn order/number of actions mechanism is really nice as it provides a balance and prevents a runaway winner . The theme works well and is translated to the board and components beautifully.