Posted on September 16, 2019 by Katrina Demeanour

We are very lucky to have a wealth of very talented people in Brighton including musicians, artists and, of course, game designers! Funnily enough, I fall into none of those categories, though the very talented Paul Stapleton fits into all three! (If you are so inclined, check out his punk-folk band Pog) He is well known in these parts for his previous two games, BN1 and ZomBN1. These are both roll and moves set in our town where you get to come across a plethora of crazy characters, all of whom are based on crazy characters in and around town!

Paupers Ladder is his newest game, set in the town of BrightHelm. The local paupers are gathered around the city gates, waiting for the chance to enter Garolium’s tournament. Most have never set foot into the wildlands before, but all are waiting the chance for riches and fame. However, strength or riches on their own will not help you, only through the Virtues of generosity, knowledge, bravery, magnificence, and fellowship can you become ruler of the Royal Court. Be the first to learn three of these skills and you will win!

Please note that we got to look at a prototype version so all components are not finished versions!

Place the board in the centre of the table. Shuffle separately the beach, forest, swamp, mountain, and mine cards and place them in stacks by the side of the board. Place the gems near the board so everyone can reach them. Randomly place one rarity equipment card on each of the towns on the board, then shuffle up the rest of the equipment deck and place four more items on top of each rarity card. Each town should have a total of five equipment cards available. Then place the equipment deck by the side of the board. Shuffle up the quest cards and place one face up in each town. Shuffle the recipe deck and place it, purple side up, near the board. 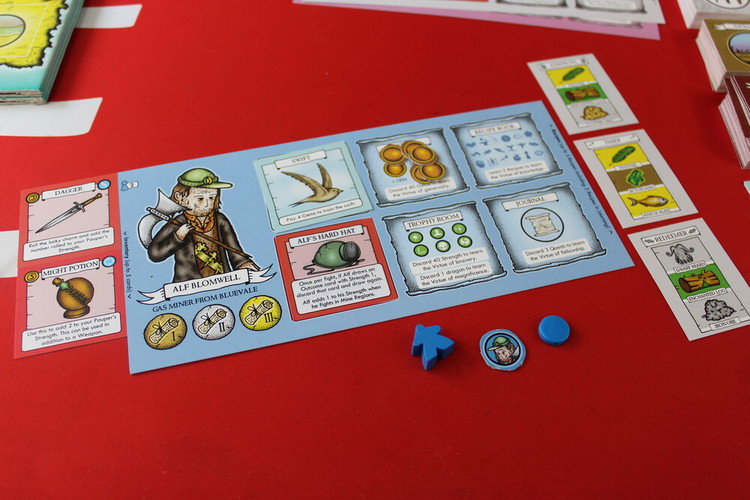 In player order, each player then takes four cards from the top of the recipe deck The grey side on the reverse shows which ingredients are needed to learn the recipe. Each shows three but you will only ever need two to complete a recipe. Choose one to keep, then pass the remaining cards to the player on the left. Continue doing this until each player has three recipes. Place these, grey side up to the right of your paupers card, these are your recipes in learning. The remaining recipes are then split into four equal stacks. Each player may then buy one equipment card. Pick up and look at the entire deck in your starting town, choose one card, pay the cost (shown in the top left corner) and place it face up in front of you. Then draw a card from the equipment deck to refill the town store. There must always be five cards to choose from in each town at any time. 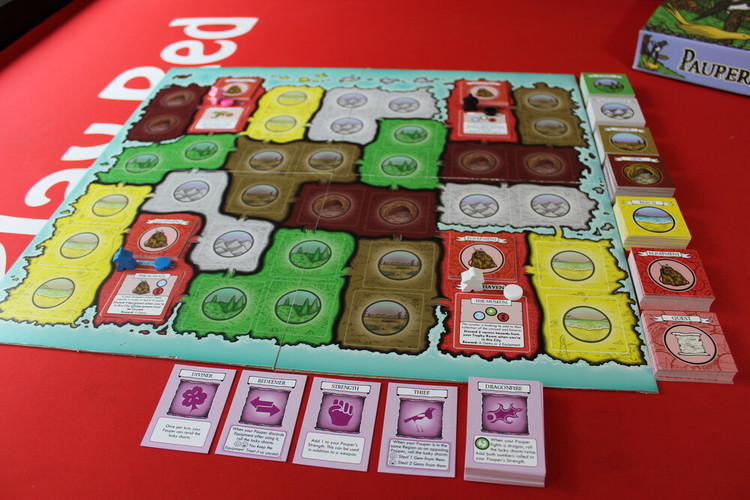 Now you are ready to play!

There are five virtues that are available to learn through the game, the first player to complete any three of them wins the game. You may complete a virtue at any point in your turn, when you do so move your virtue marker along the track on your paupers board. You may complete multiple virtues in one turn, however, you may only learn each virtue once in the course of the game. The virtues are:

The Virtue of Knowledge - Learn a fifth recipe. You begin the game with three recipes in learning and will choose another from the top of a stack when you complete one. Remember, you only need two of the three shown ingredients to complete a recipe.

The Virtue of Bravery - When you defeat hazards in the game, you will place the cards into your Trophy Room. Discard hazards from here to gain this virtue - 40 in a 2P game, 30 in a 3-4P game.

The Virtue of Magnificence - If you defeat a dragon in the wild, the card will be placed in your trophy room. Discard a dragon card to gain this virtue.

The Virtue of Fellowship - If you complete a quest from a City, take the card and place it in your journal. If you discard three quests, you gain this virtue.

In your turn, you may move both your characters (Pauper and bird) in any order. Your bird may move into a connected region, your pauper may move one but then you may pay one gem per extra region moved. If your character finishes their move in a region with a hazard, they must fight it! Draw the top card from your Outcome deck, the number shown is your strength for this battle. Add any bonuses from equipment or recipes that your Pauper has (your bird has no hands so obviously can’t be carrying these to get any associated bonuses!) You may also choose to pay one gem and roll the lucky charm - add any bonus this gives you. If your total strength is equal or higher than the hazards, you have defeated it! Gain any bonuses shown on the hazard card - this might be gold, equipment (drawn from the top of the appropriate region deck) or it could be an ingredient (place this card next to the recipe in learning you wish to use it towards) Then, place the card in your trophy room and it’s strength will count towards the Virtue of Bravery. If your total was less than that of the hazard, you have failed, the hazard stays in the region until it is beaten. 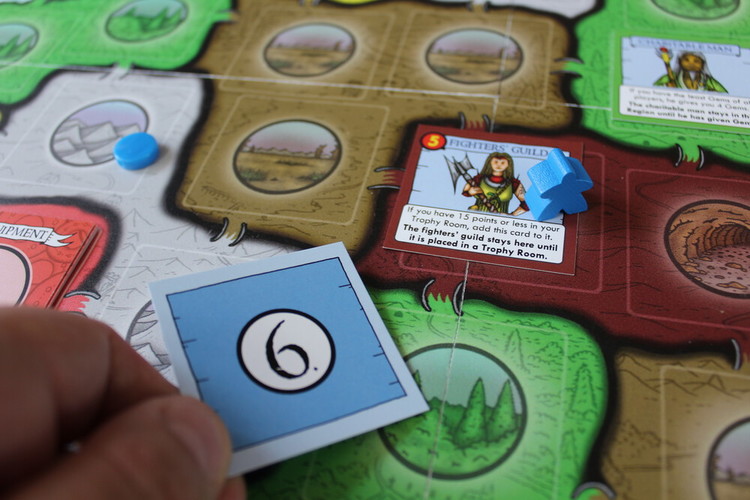 If you move into a region you may choose to explore it. You may choose a card already in the region and explore it by following the instructions on the card, this may be picking up an ingredient you need, fighting a hazard or taking the actions on an event card. If there is still empty spaces in a region you may draw the top card from the region deck, this will be your encounter for the turn. Follow the instructions according to the type of card you draw. If you pick up the second ingredient you need for a recipe, you may learn that recipe. Flip the card over, discard the ingredients used and choose a new recipe to learn from the top of one of the recipe decks. This becomes a recipe in learning. You may never have more than five recipes in total. 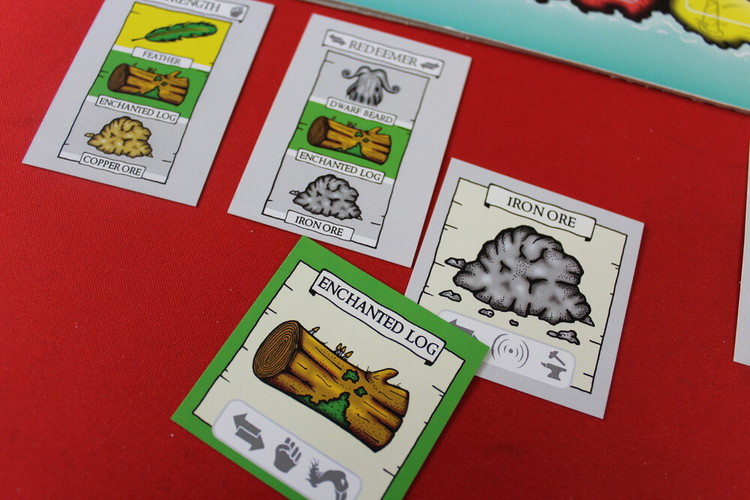 When exploring a city region you have two options. You may buy or sell one piece of equipment at the City’s store. The store will buy equipment from you at half its cost rounded up. Place the card into the store pile. You may also buy equipment by looking through the items available, paying the cost and placing the item in your inventory. If the store is left with less than five items after you have bought from it, refill by placing an item card from the deck face down in the store.

As soon as a player has learned their third Virtue they win the game and will be sworn in as the new ruler of the royal court!

The beauty of Pauper’s Ladder is it simplicity and it’s tribute to classic games, we’ve seen a classic gaming resurgence; re-issue of and re-skinning of Talisman, new Fighting Fantasy books, their spiritual successor in the classic feel dungeon crawler Escape The Dark Castle and Z-Man’s Choose Your Own Adventure adaptations. Pauper’s Ladder sits very much in the same tradition. It’s not a complex game by any means and there is a serious amount of luck involved with dice rolls and combat strength drawers. But it is a game rich in theme, it’s a low stress game of discovery of a fantasy realm that is familiar, and sometimes very silly, but has Paul’s unique vision to colour it to make it something truly special. A family game that any child of the late 70s / early 80s should be more than happy to introduce the younger new generation of gamers to. 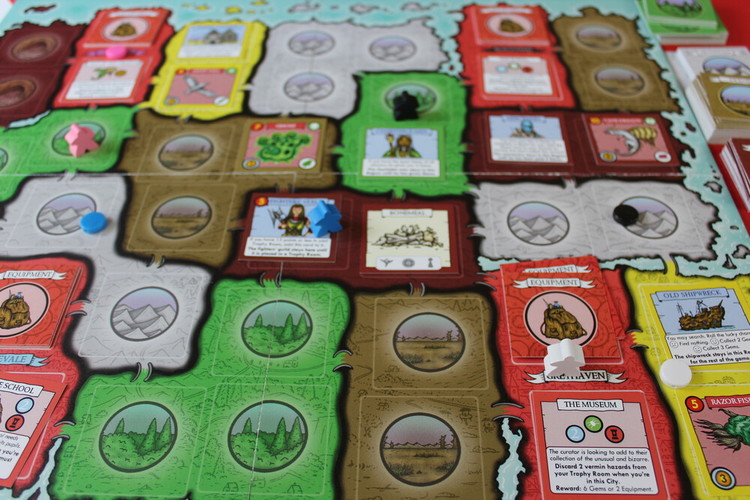 Review kindly provided by Paul Stapleton of Bedsit Games. Pre-orders are available until Monday 16th September,  and it will be available at Essen Spiel '19.