Race for the Galaxy

Posted on December 11, 2017 by Katrina Demeanour 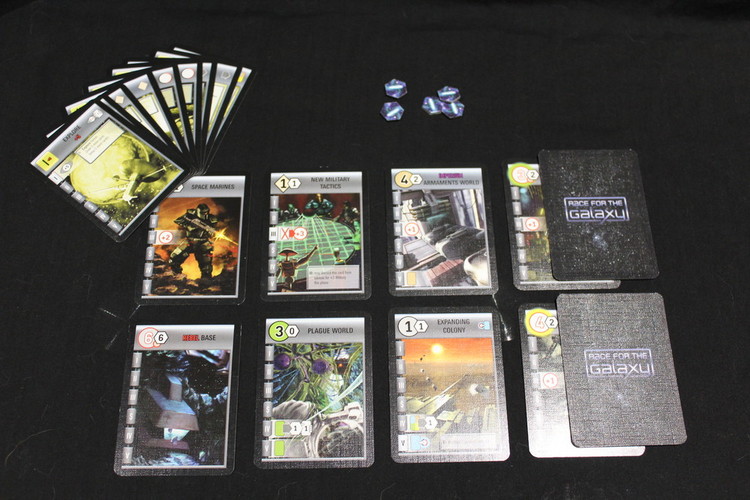 Explore, Settle, Develop, Trade, Consume or Produce? What do you need to do right now, and most importantly, what are you willing to let your opponents do? Your goal: to build the most prosperous and powerful empire! 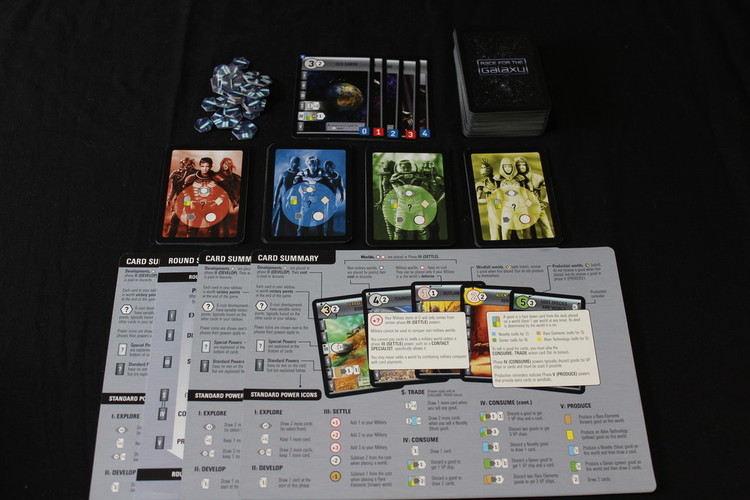 Shuffle up the start world cards and deal one face up on the table to each player, any spare are shuffled back into the deck. Set aside 12 VP chips per player (this will be one of the end game triggers, so in a 4 player game use 48 points) Give each player a set of action cards and six cards from the top of the deck, this is their starting hand. Cards are used for many things in this game, they can be used as currency to build worlds or developments, as resources or as their face up world or development.

A game is played over multiple rounds. At the start of the round each player simultaneously and secretly chooses one action card to play this round, placing it face down in front of them. When all players have chosen, turn all the action cards face up. Then the players perform the selected actions in phase order (1 - Explore, 2 - Develop, 3 - Settle, 4 - Consume and 5 - Produce) Each phase has an action which all players get to perform, however the player that chose that phase get a bonus. The bonuses either modifies or is in addition to the base action. 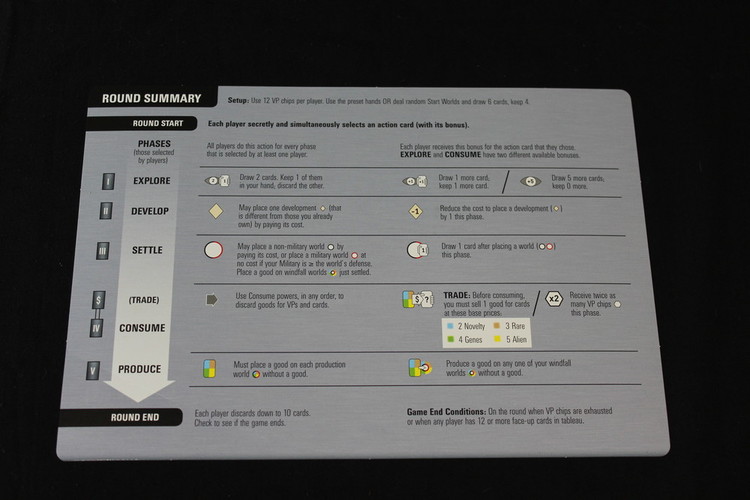 Each player draws two cards and discards one of them into the face-down discard pile. There are two versions of the explore card so the bonus depends on which is played. If you play Explore +5, you explore by drawing seven cards and choosing one to add to your hand, discarding the rest. Explore +1, +1 would mean you would draw three cards and keep two. The powers of an cards can be also upgraded further by cards in your tableau.

Each player places a development card from their hand face down them simultaneously turn them over and pay for them. Each development card has a diamond symbol with it’s cost inside, discard a number of cards equal to that number to pay for it. You cannot build multiple developments with the same name. The number in a hex next to the cost is victory points at the end of the game. 6 cost developments have a ? listed as their VP value, these are worth a variable number of victory points at the end depending on the card text.

Each player places a world card from their hand, face down then simultaneously turn them over and either pay for them or conquer the. Each world has a circle with a cost in it, if it is in black then discard cards to pay the cost the same as you would for development cards. If it is in red, this is the worlds defence, these cannot be placed with payment but must be conquered. To conquer a world, a players military must equal or exceed the defence. Military is granted by powers of various start worlds, development or worlds and is represent by a red plus (or minus in some cases!) Windfall worlds - Some worlds have a coloured ‘halo’ around the circle, meaning they produce a windfall when put into play. If a world produces, place a card from the top of the deck face-down on top of that world. You now have that resource.

All players must use their consume powers if they have them, to discard goods for VPs and/or card draws. Goods are discarded face down. Each good can only be used for one power, though some cards let you discard multiple cards. Consumption is mandatory, though they can be invoked in any order. There are two versions of the consume card so the bonus depends on which you use. Consume:Trade means you must sell one good by discarding it and draw the number of cards depending on what that good is. Consume: 2x VPs double the amount of VP chips that your consume power provides.

Place a good on each production world (the worlds with solid, coloured circles), take a card from the top of the deck and place it face down on top of the world. No world can have more than one good on it.

Remember on every phase to keep an eye on any cards you have down that might give bonuses during specific phases! After all the chosen phases are done, players must discard down to ten cards in hand before starting the next round. The game ends at the end of a round in which either a player has twelve or more face up cards in front of them or the last victory chip is given out. Total up players VPs from chips, developments and worlds. The player with the highest wins!

Race for the Galaxy is a very simple, fast game once you get used to the iconography which can be pretty overwhelming at first. If you’re learning it, take the time to play a few games after each other to really make it ‘click’. The simultaneous action phases are nice and means no one is left waiting for their turn, though, remember you can end up really helping someone else by playing the action card they want! There are now multiple expansions available meaning you could never get bored of this quick, ever changing game!