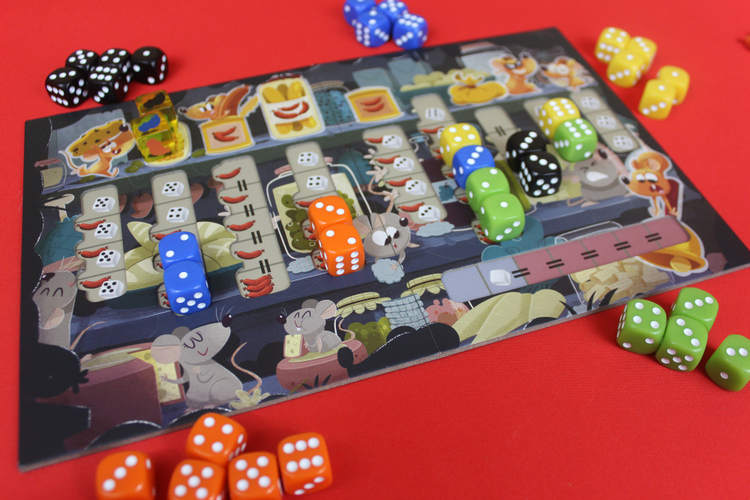 Winter is coming! The human's pantry is full but the local mice need to stock up for the coming harsh winter. Each player controls a family of mice trying to sneak into the pantry and escape with what they can. The first player to fill their sack up with goodies wins the game! 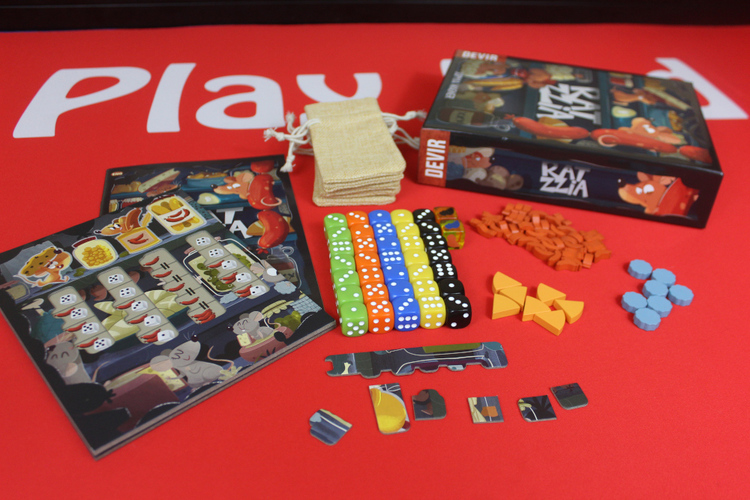 Place the board in the middle of the table and the food tokens off to one side. Place the candy dice in the candy jar on the game board. 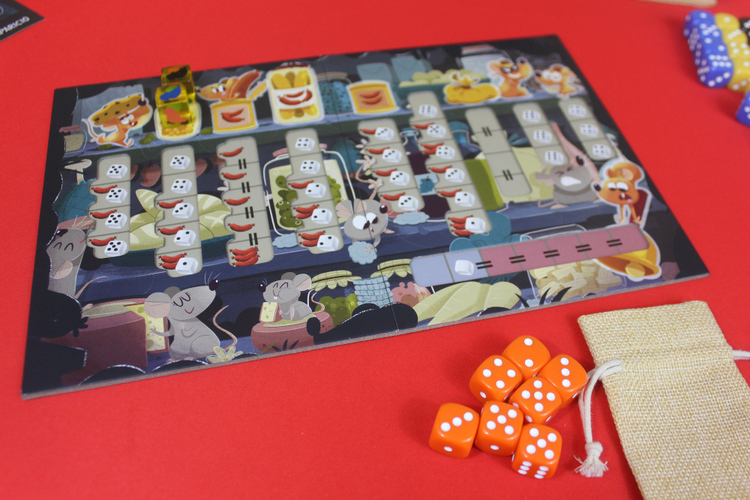 Give each player a food sack and the dice in their chosen player colour. Choose a start player and give them three sausage tokens, each subsequent player gets one more sausage than the player before them. These tokens go in front of the player, not into their sack.

On a players turn they will roll their dice. After this initial roll, they may choose to re-roll as many dice as they wish, though only once per turn. Then, they may place dice on the board in spaces that match the required number. Players may place as many dice as they want, however, they must place at least one. These dice stay on the game board until the appropriate row or column has been filled, meaning they will probably have less dice to roll on their next turn. If, at any point, a player has no dice left or else wants more dice to roll, they may use a turn to remove dice from one column of the board. They then take this action instead of rolling and placing. 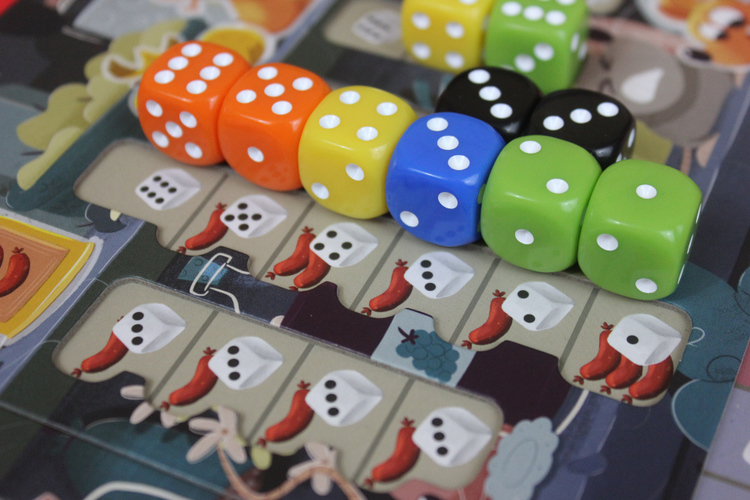 The rules for placing dice are:

Once a player has placed as many dice as they wish, they must check to see if they completed any of the columns. A column is considered complete when there is a dice in the top space. Working from left to right, all players remove their dice on completed rows and gain the rewards shown on the board where their dice was. The player who is having the current turn gains all rewards shown at the top of the filled column(s). Play moves onto the next player.

From left to right, this is the reward for the columns:

Anxious Annie - Take the die from the top space of this column and immediately place it on the bottom square of any other column. The dice does not have to match the required number. If there are already other dice in this column, push them up. If moving these dice up results in a column being filled, the active player also receives that bonus.

Get Sausages - The next four columns simply give you sausages, either for placed dice and/or for completing the row. Place all food gained this way in front of you. 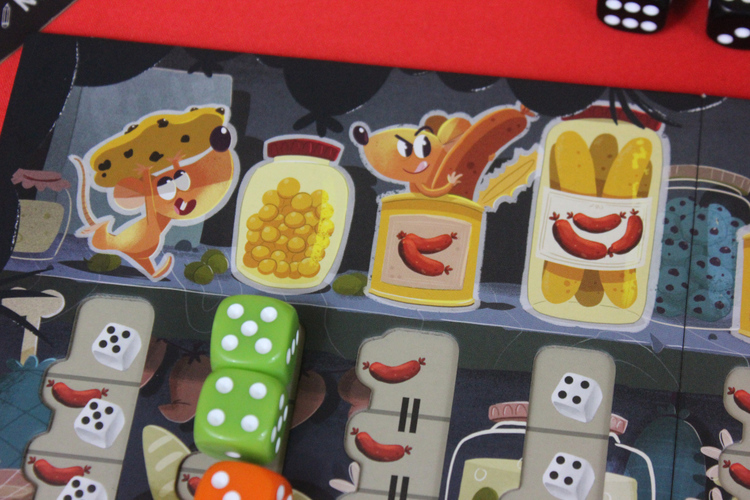 Safeguard Your Food - Having food is purely half the game! This reward lets you take unprotected food and place it safely in your sack (thereby counting towards your end game points!) Add together the highest matching pair of dice and place that much food into your sack. All other food remains in front of you, if you do not have enough food to meet the required amount, then you cannot put any into your sack! Example: If the top two dice were threes, you would be allowed to put exactly six food safely away.

Greedy Gobbler - Target one player and steal half their unprotected food (rounded up) and place it in front of you.

Accountant - All players must hand over half their unprotected food to the player next to them. The player who triggered this effect chooses which direction (left or right) 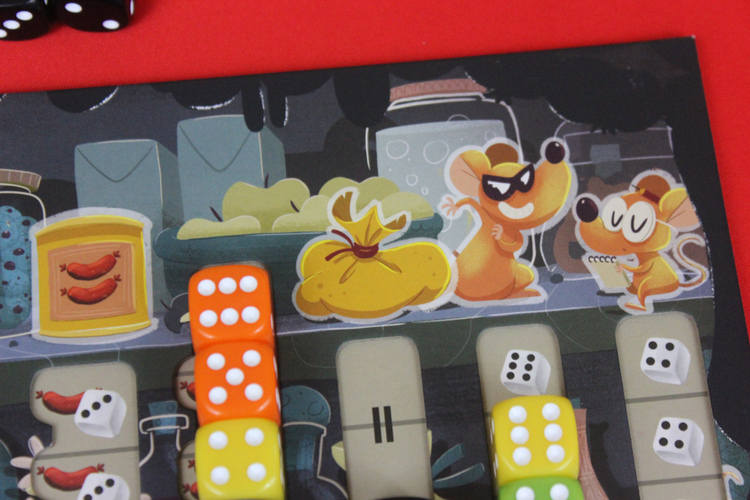 The Cat Row works differently to the columns (well, obviously, it’s a row for starters!) Any grey spaces here may be filled with any numbered dice of your choosing. As soon as the grey spaces are filled, any other dice that match the one to the left of it must be placed as soon as they are rolled (before and after re-rolling dice in the turn) When the cat row is complete, the cat comes out and hunts all the mice! All players immediately remove all of their dice from the board.

The game ends when a player gets twenty-five food or more in their sack! 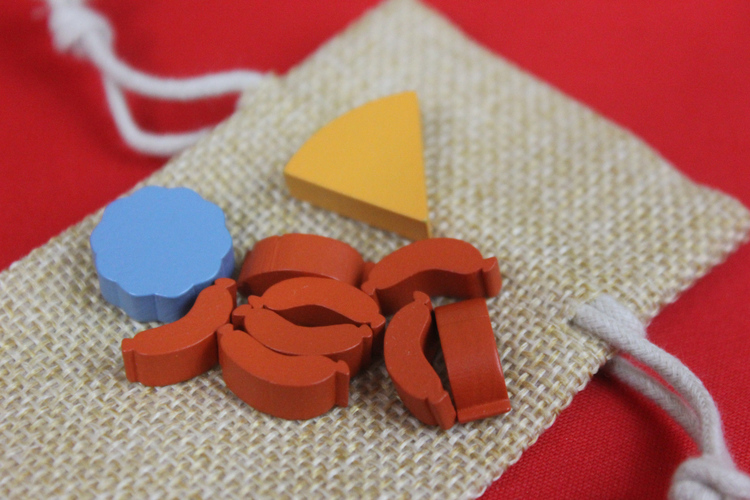 Ratzzia is a cute little dice chucker with Yahtzee overtones. The dice staying on the board until columns are filled feels tough at times, especially as there is no way to alter dice rolls. As someone who has the worst luck with dice rolls, this is where the game didn’t gel for me. You end up being forced to place dice that you really rather wouldn’t!

Having said that, Ratzzia doesn’t outstay it’s welcome as a twenty-minute dice chucker, the theme is cute and it doesn’t feel quite as brutal as King of Tokyo. If you don’t mind the luck of the dice or you’re good with them, check it out! 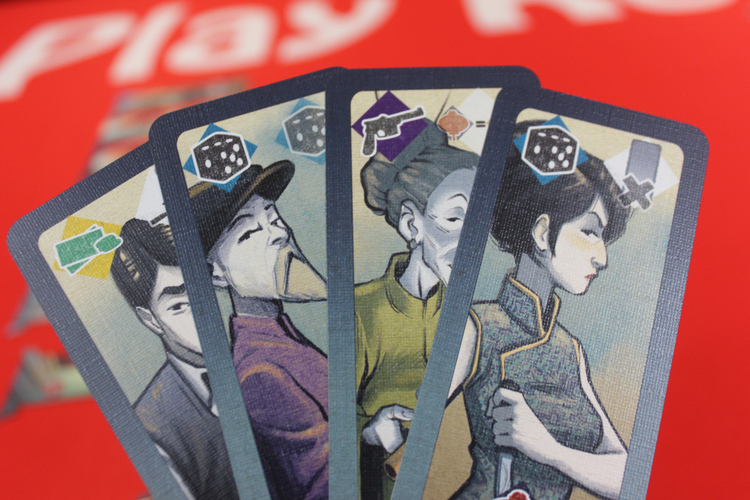 As the head of a triad, your goal is to amass as much money as possible, well, at least more than your fellow triads, anyway! Shadows of Macao is a quick and easy game with beau... Continue reading →