Posted on December 27, 2018 by Katrina Demeanour 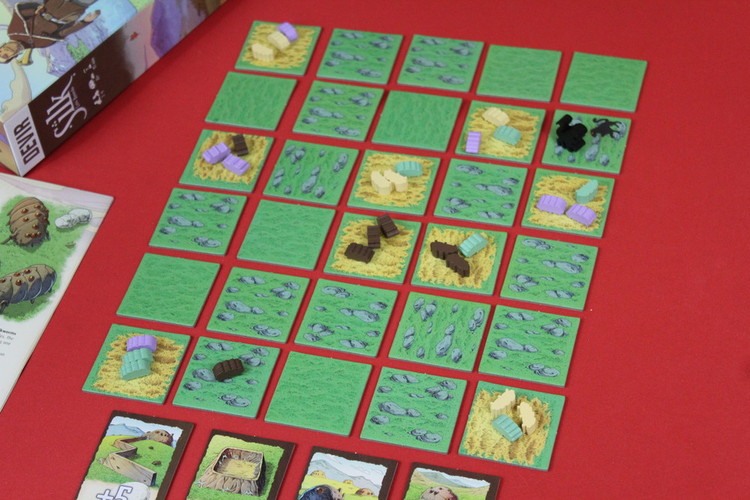 Who would have thought that the life of a silkworm farmer would be such hard work? With only your trusty Mastiff for company, you must defend your silkworms against rival farmers and the dreaded Ookami who will devour them. You may use your mastiff to try and herd opponents silkworms towards the Ookami to distract her or to herd your silkworms onto more fertile lands after they have grazed the land and rendered it barren. 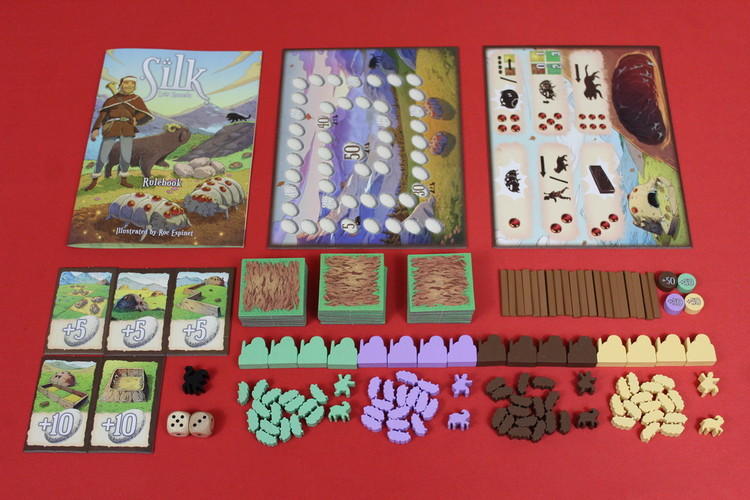 Separate the Ookami's den and shuffle up the rest of the tiles. The number of players determines how many tiles you will play with. For two players take 19, three players take 24 and four players use all 29 tiles. Shuffle the Ookami's den in with these tiles, then form a grid with them (pasture side up). In two players a 4x5 grid, three players a 5x5 grid and four players a 6x5 grid. Ensure there is space between the tiles to make in-game actions easier. Place the Ookami token on her den on the board. Place the scoreboard, the action board and the improvement tiles near the game area. Give each player the pieces in their chosen colour and place the score marker (blank side up) on the zero of the score track. Count out the appropriate number of wall pieces for the player count: two players 10 walls, three players 15 walls and four players all twenty walls. The game will end when either this supply of walls run out or when one player hits the required number of points as marked on the score track.

Chose a start player. That player places two of their silk worms onto a dry pasture on the board. They may either place two on the same space or one silkworm onto two different pastures. There may be silkworms of different colours on the same space, but there may never be more than three on a single space. Players go round the table, each placing two silkworms until every player has seven on the board. If all dry pastures are full, you may place on the normal pastures.

Then, beginning with the player who placed the last silkworm and going anti-clockwise around the table, players place their special pieces - their shepherd, mastiff and one of their nurseries. A tile occupied by a shepherd, mastiff or the Ookami may not contain any other pieces. Nurseries must be placed at the intersections between two or four tiles where one of those tiles contains a silkworm of the players colour, they must also be at least two tiles distance from any other nursery, this distance rule applies when placing nurseries in game.

Once everyone has placed you are ready to begin the game.

There are two parts to each players turn:

Firstly, they must place a silkworm onto the board if they have any in their supply and if there is space to place them. They may only be placed only tiles that already contain that players silkworms or a tile that is adjacent to one of that players nurseries. 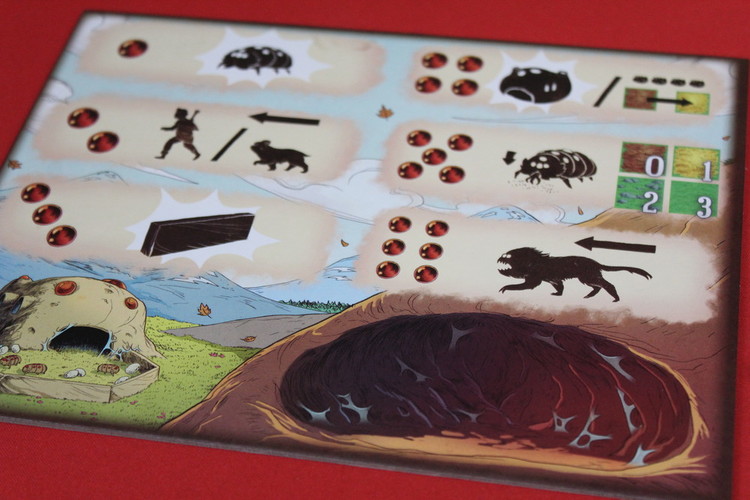 The actions are as follows:

Place one silkworm from your supply on any tile that has less than three silkworms on it and is either next to one of your nurseries or already has one of your silkworms on it. If you have run out of silkworms in your supply, you may rescue one from the Ookami's den (if there are any there) If you cannot place a silkworm, you must use silk points to adjust the dice result.

If you are the first player to empty your silkworm supply, flip over the silkworm improvement marker and gain the ten points as shown on the tile. 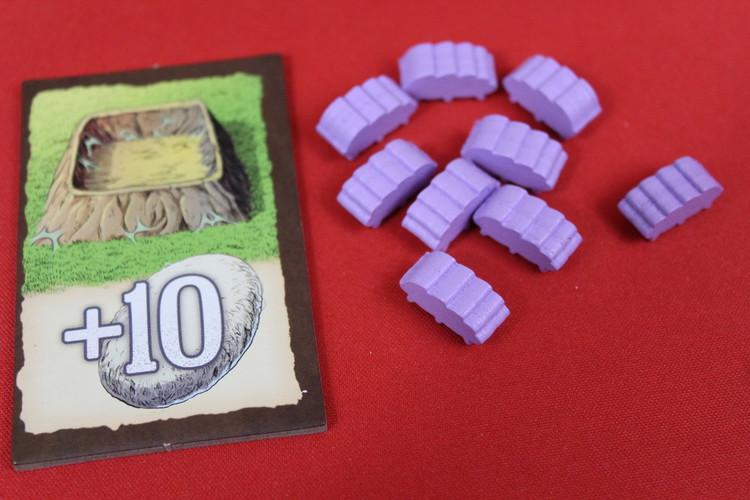 2 - Move your Shepherd or Mastiff

A player may move their shepherd or mastiff one space. Movement is never diagonally and all pieces except silkworms can wrap around the board. Only the shepherd can move through walls. The shepherd cannot enter a tile containing another players shepherd or the Ookami and the mastiff cannot enter a tile containing another mastiff or shepherd. When these pieces move they will ‘bump’ other pieces regardless of who they belong to.

The shepherd bumps mastiffs and silkworms and the mastiff bumps silkworms and the Ookami. When you bump silkworms, you may distribute them how you like to one or more adjacent tiles of your choosing. If they are at the edge of the board they cannot move to the other side so are lost in the mountains and returned to the players reserve. If they are bumped onto the space with the Ookami, they are captured and placed onto the beast's lair on the action board. If a mastiff if bumped onto a space with the Ookami, this creates a chain reaction and she will also move.

Take a wall from the supply and place it between two tiles where there isn’t already a wall. It must also connect to your nursery, either directly or from another wall. If a player builds a wall that completes a wall segment so both ends are connected to a nursery they immediately score points equal to the length of the wall ie one point for each wall piece. At the end of the game players will also receive points for each enclosure they control. An enclosure is a set of two or more tiles completely surrounded by wall tiles. A player controls an enclosure if they have the most nurseries in contact with the wall. Multiple the number of tiles in the enclosure by the number of nurseries that player controls. There are also two improvement tiles that can be achieved with walls during the game. The first player to build a wall segment that is at least five sections long gains five points and flips over the corresponding improvement tile. Also, the first player who builds an enclosure of three spaces or more receives ten points from the appropriate improvement tile and flips it over. 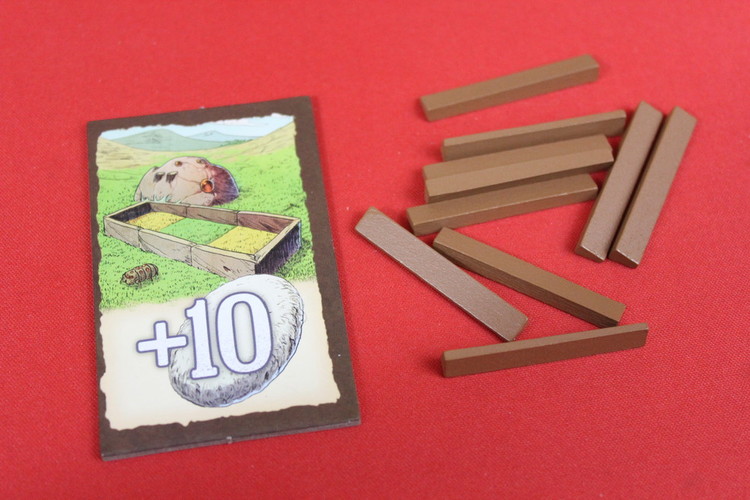 The first person to build a five wall segment scores five points from the appropriate improvement tile and flips it over. 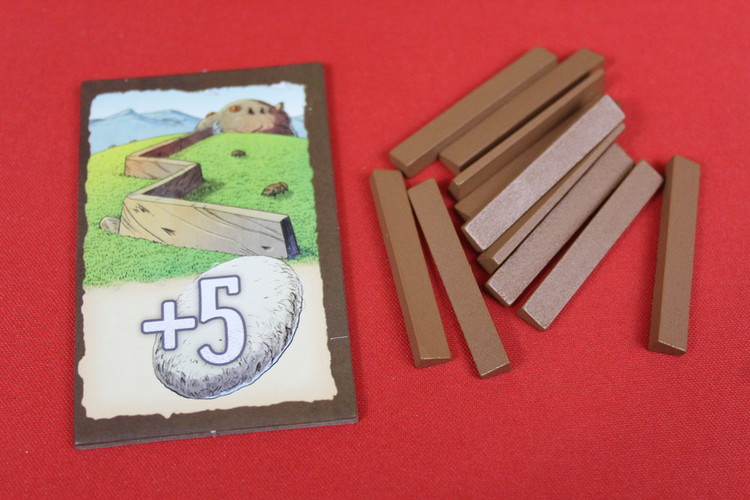 Nurseries allow players to place silkworms, build wall segments, score enclosures at endgame and also regenerate barren tiles. Nurseries must be placed at intersections next to a tile containing your shepherd. It must also be at least two tiles away from any other nurseries. The first player to construct all four of their nurseries gains five points and flips the corresponding improvement tile. 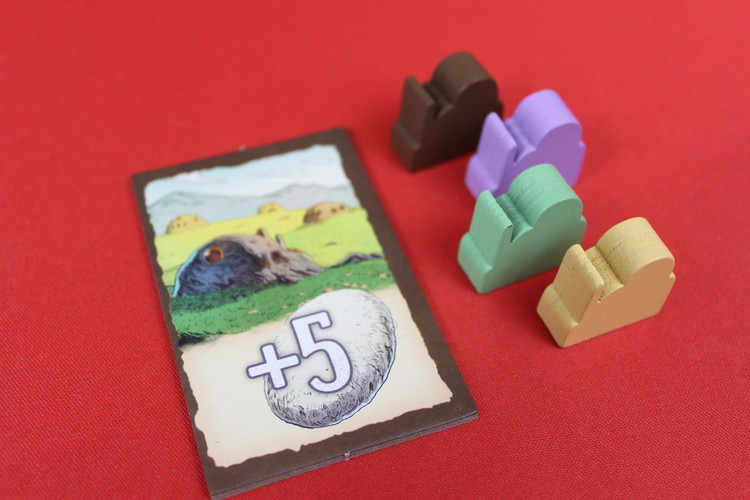 This action allows a player to earn points by feeding their silkworms. The number of points they receive is equal to the number of silkworms on the tile multiplied by that tiles bonus (as shown on the board) Bump all the silkworms on that spot and flip the tile over, making it a barren tile.

The Ookami bumps shepherd and captures any silkworms, placing them in her den on the action board. She can use a wrap around move but cannot enter a tile occupied by a mastiff

The game ends when a player builds the last available wall, a player hits the score target (30 points in 2 player, 40 points in 3 player or 50 points in 4 player) or if, after a grazing action all of the tiles have become barren.

All other players get one final turn and final scoring is done. 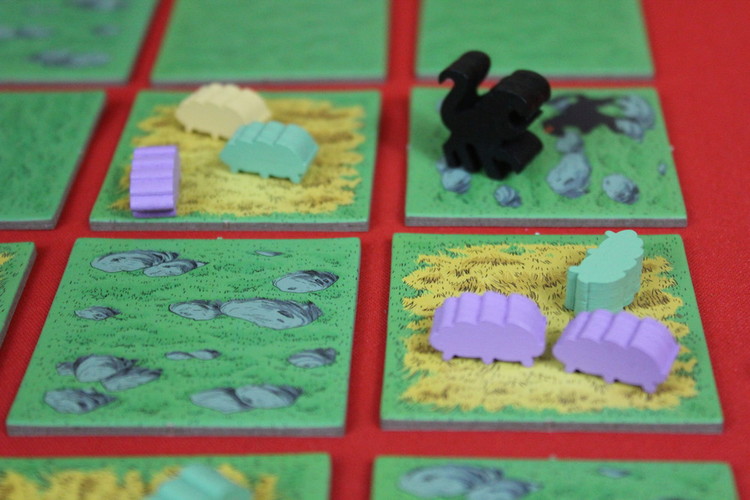 We initially learned and played this at two players and it didn’t do much for us, the player interaction was quite limited and we pretty much stuck to our separate parts of the board. However, four players is really where this game shines. With four players on the board, pieces are bouncing all over the place and a lot of name calling ensues! The Ookami obviously also moves a lot more at this point, turning this into quite a mean game (I always said I didn’t like co-ops!) With super cute silkworm meeples and loads of player interaction, this is a great game with an unusual theme.