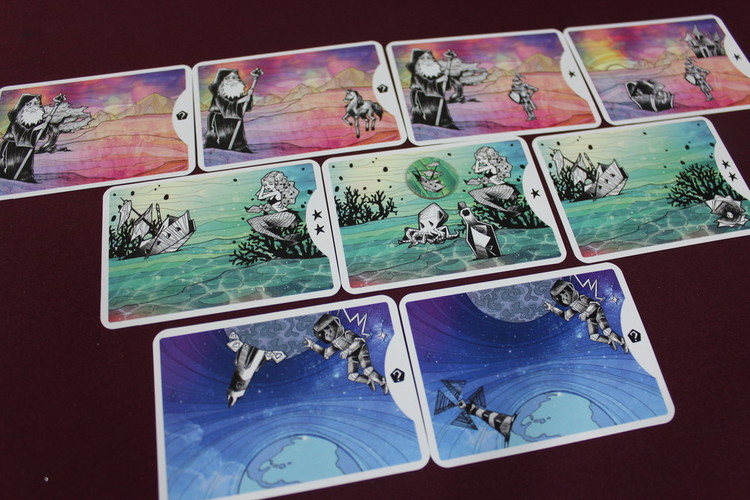 Dreams seem to be a popular theme in gaming at the moment, and it’s easy to understand why. In a psychedelic dream world, anything goes and Somnicum certainly plays up to this expectation. The Sandman has disappeared and who better to take his place but you! 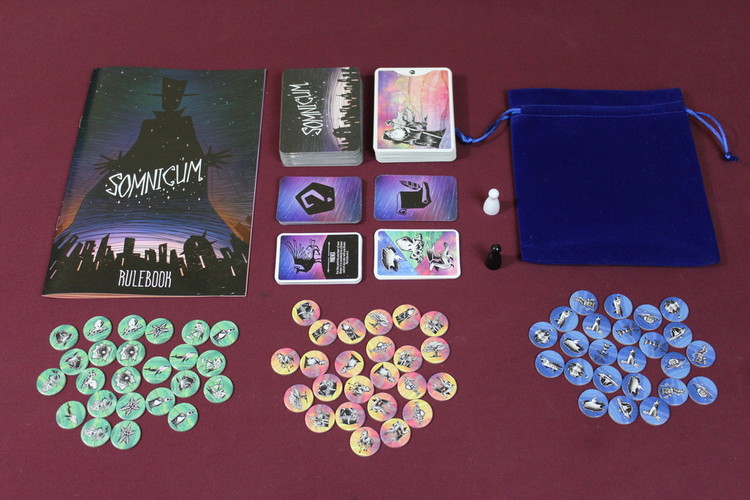 Place all the magical sand tokens into the cloth bag. Shuffle up the dream cards and place a circle of face-up cards in the middle of the table. The number will depend on your number of players - 16 for two players, 21 for three players or 24 for four players. Put the rest of the deck aside for now. Shuffle the discovery cards and put them to one side, then shuffle the goal cards and deal one to each player, put the rest back in the box. You may look at your goal card but keep it hidden from the other players.

Choose a start player. The second player draws one random magical sand token from the bag, the third player draws two and fourth player draws three. These are kept face down in front of you during the game, so other players know how many tokens you have but not what dream components are on them. The player who will be going last places one of the dream pendulums between two cards of their choice, the other one is placed opposite it. You are now ready to play.

The game is played over three rounds with a scoring phase at the end of each round. 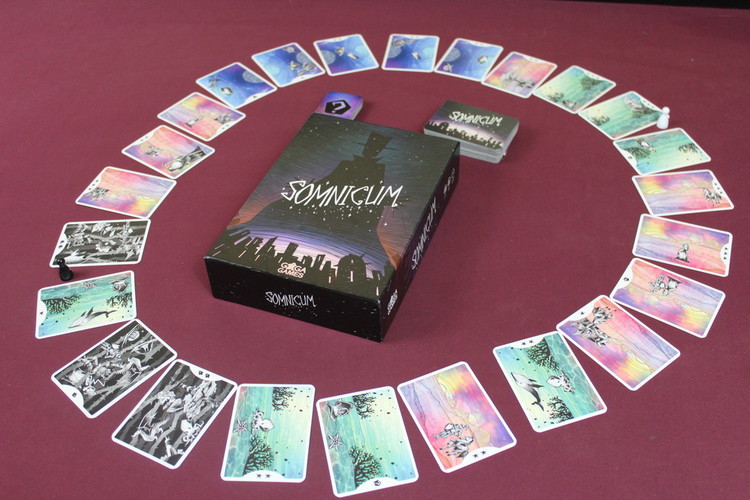 Dream cards are related to three different themes, Fairy Tale, Underwater, and Space. Each has between one and three different dream particles on it. A dream particle is an image that relates to the dream card it is on. For example, the astronaut will only be found on the space-themed dream cards. The number of stars on the right-hand side of each card indicates how many points it is worth at the end of the game. If, instead it has a question mark symbol, this means you may draw a discovery card when you place it.

However, there are also nightmare cards! These are a special type of dream card that is not related to any of the themes, however, they have six particles all from different themes so can be really handy. At the end of the game though, you will lose the number of points as indicated on the right-hand side of the card. 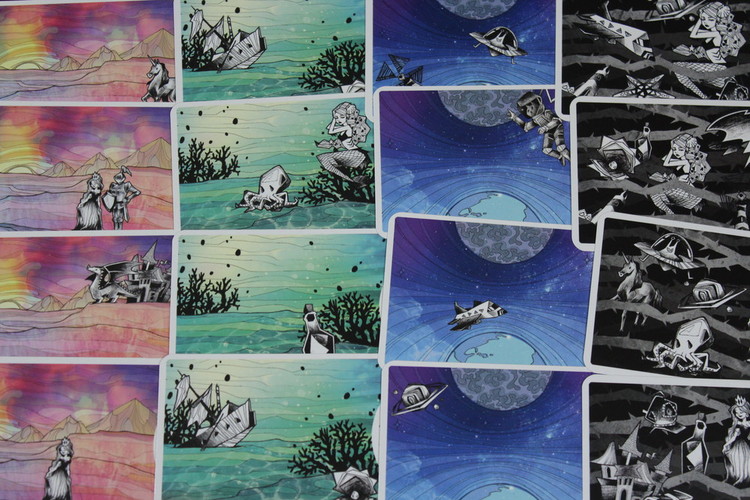 You should choose one of the pendulums and move it in a clockwise direction to the card you wish to take. You may choose either of the pendulums to move. The first three cards are always free to take. Each card after that will cost you magical sand tokens, eg the fourth card one token, the fifth card two and so on. You choose which tokens to lose ad these get dropped back into the bag. However, if you take one of the first three cards you will gain tokens. The next card to you gives you two tokens and the second card gives you one token. You must then place the card you have just taken into your dream.

At the start of the game, you haven’t started building your dream so just place your first card in front of you. After that cards must get added to the rightmost point in any layer of a dream. If both cards contain a matching dream particle the dream is considered unbroken. However, if there is not a match, the dream is broken. Draw a random token from the bag and place it face down between the two cards. This dream is now broken and these cards won’t score you so well at the end of the game.

Each dream can have three layers. The deeper the dream card is, the more points you score for it. Cards on the second layer will score you twice their points worth and cards on the third layer three times. To deepen your dream, place a card under the first unbroken pair of cards on the higher level (your finished dream will be a triangle with the point closest to you) Cards on deeper layers may or may not be the same theme as the cards above them but must always be placed under unbroken dreams. 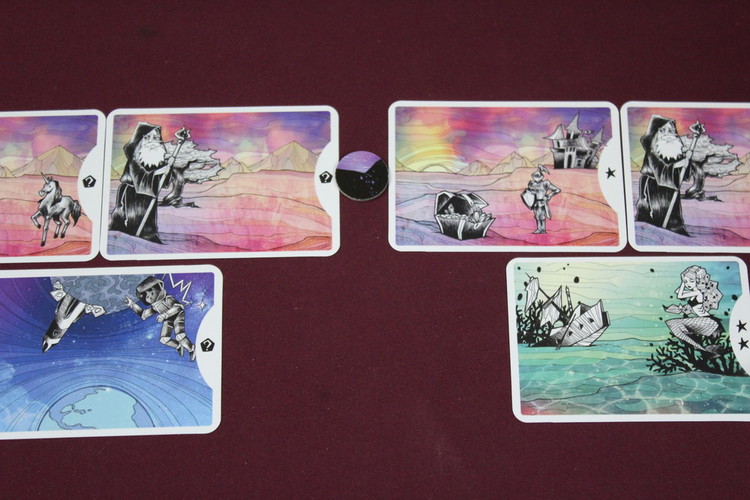 You may also add a sand token to a card. Before you take a card, you may place one of your tokens onto one of the right most cards in your dream. That dream card now counts as having that dream particle until the end of the game.

The round ends if one of the following occurs:

In both cases, the active player finishes their turn and the round ends. Reset the circle as you did at the start of the game. The person to the right of the player who took the last turn gets to place the dream pendulums and the player to the left is the starting player for the next round. Don’t take any extra sand tokens at the start of these rounds.

After three rounds, scoring occurs. All players get victory points for the sum of stars on dream cards in the first layer of their dream, the sum of stars on their cards in the second layer multiplied by two and the sum of star multiplied by three for the third layer of their dream. Any cards that have breaks aren’t multiplied and will just score you the number of stars depicted on the card. Each discovery card in your hand scores you one point. Then check your goal card, each time that dream particle appears on a card in your dream (not on sand tokens) score one victory point.

On the surface, Somnicum looks pretty simple, but it is a decidedly thinky game. There may be a few cards you want but you need to work out when is the right to take them, if other players might take them before you can and what order you want them in. I also love the way the tokens become a form of currency in your choosing phase, gaining or losing those tokens can be a hard choice at times. The colour choices in this game are weird, wonderful and work perfectly! Each dream theme has its own colour scheme that is not only beautiful and psychedelic but totally evocative of the scene it is portraying. This is one of those games I’d see being played at a Con and have to ask about because it’s so striking. The gameplay is simple but definitely has some thoughtful decisions to be made. The main criticism I have of this game is tablespace, it is a hog. Having the cards in a circle then needing room for a three-layered pyramid for each player means you need space and lots of it for this game. Though this feels like a pretty minor gripe for what is a solid, fun game! 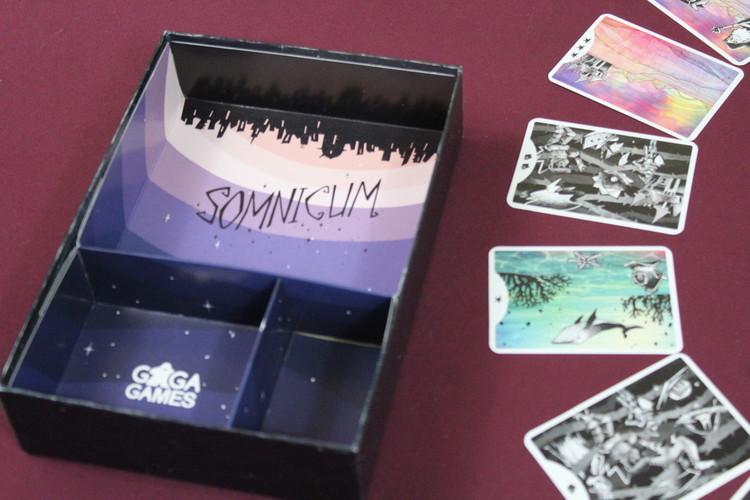