Posted on November 19, 2019 by Katrina Demeanour 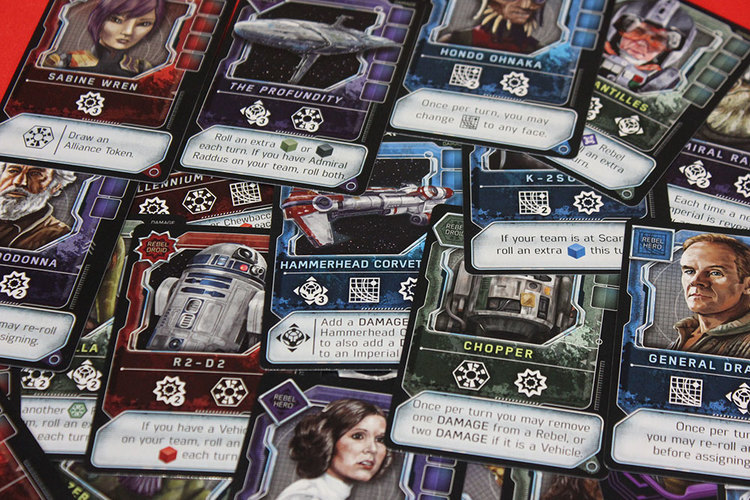 First, the most important rule of this game: you must hum The Imperial March the whole time whilst playing! OK, we ended up just playing the soundtrack to Rogue One instead but it was fun to see if anyone would! We’re huge Star Wars fans in this house so we had to give this a try, even though I was disappointed you were working against Darth Vader. Players must defeat the Imperials before the Death Star becomes fully operational. 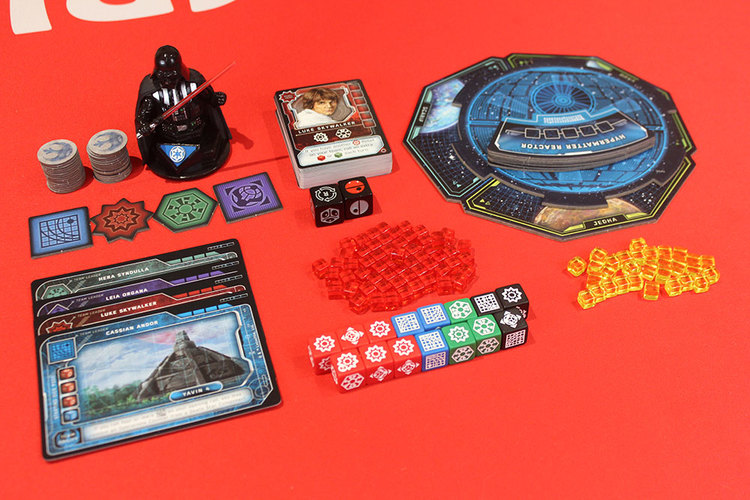 Each player chooses a Team Base Card, the matching team deployment token and takes the leader from the asset card deck. Shuffle up the rest of the asset cards. 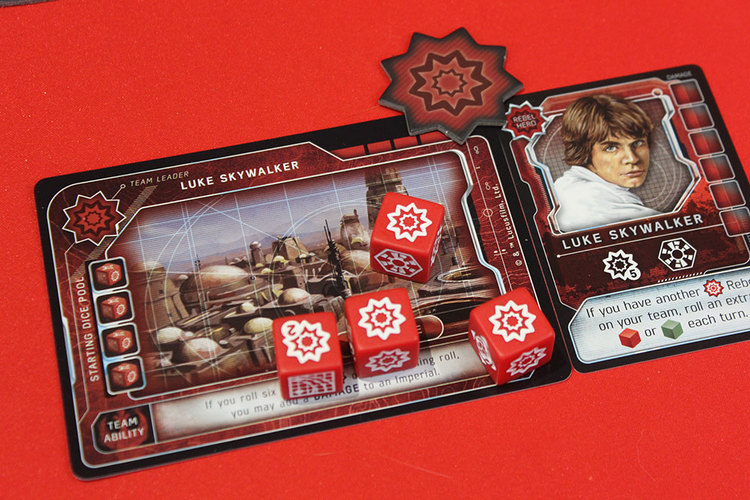 Place the Death Star board with the six component tiles round the edge, face down and put the Death Star operation counters nearby. Place the deployment Zone Board in the middle of the table with Darth Vader in the centre. Deal out the top nine asset cards around the board (three in each zone) Place all dice, damage counters and Alliance tokens (face down) next to the board. You are now ready to play! 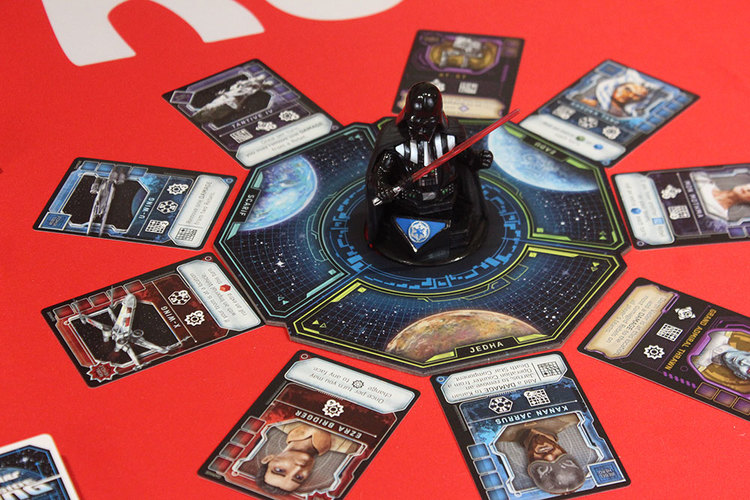 The player who most recently watched a Star Wars movie goes first. A players turn consists on four phases:

The active player chooses where to deploy their team and places their token on that zone.

Roll and resolve the Dark Side Dice

Next, roll the Darth Vader dice. If the Death Star symbol is rolled, re-roll the Death Star die and follow the above resolution. Four of the faces show movement arrows - two to the left and two to the right. Move him in the direction shown. He will then attack all rebels in that area. Add a damage counter to each rebel card in that area, this also includes the active players team if their deployment token is there. Add a damage counter to each member of the team if present. Imperials in this area will then be activated. Resolve all cards, this will usually involve more damage being taken! 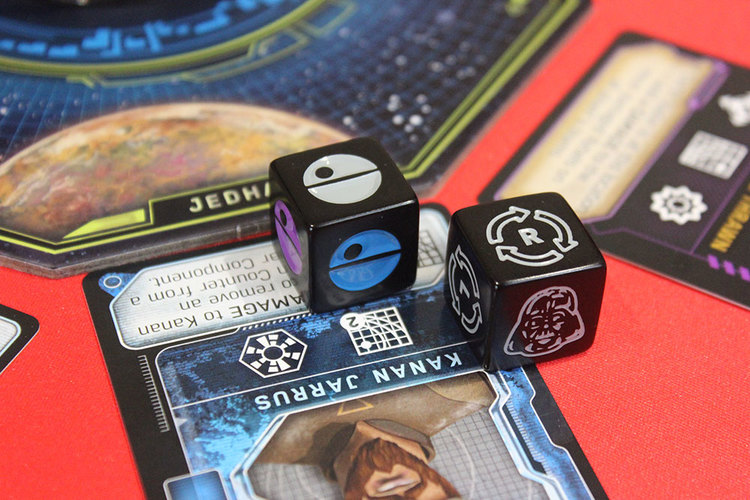 If Darth Vader's helmet is rolled, activate all Imperial cards. Start with his location and move around the board clockwise.

Now the active player has their chance to fight back! The active player rolls their dice pool. This is the four dice shown on their team base card plus any others gained from Rebel abilities. They must then choose to assign at least one dice from the pool they rolled else select and forfeit a dice from their pool and roll again. Dice may be assigned to match either the symbols of characters on their teams’ location. That may be to recruit Rebel characters or to attack Imperial characters. Alternatively, dice may be used to trigger abilities of Rebels already on their team. 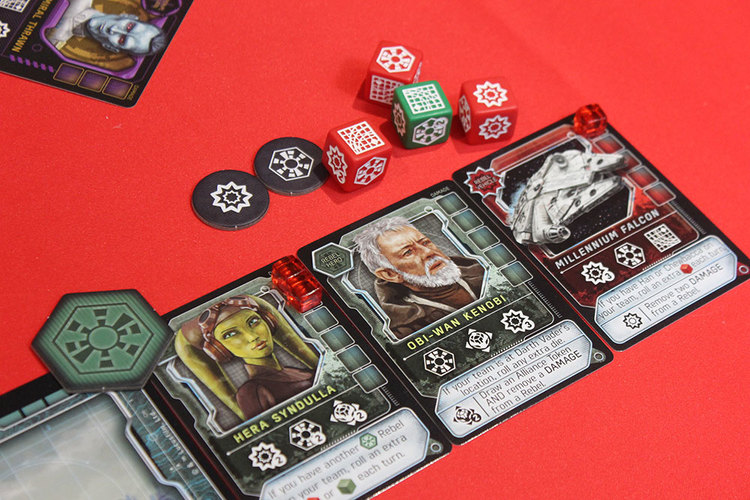 Triggered abilities happen immediately and may help with subsequent rolls!

The player then continues to roll their dice until all dice are assigned or cannot be assigned.

When a player has either assigned or forfeited all of their dice, they are resolved. When dice assigned match all the symbols on a Rebel character, that character is recruited into a players team. The player takes the card, places it in front of them and removes all damage counters from it.

If it is an Imperial character with all dice assigned, that Imperial is successfully attacked. Add a damage counter to them and the player takes an Alliance token for each damage done. You may only do one damage per Imperial character a turn unless abilities say otherwise. 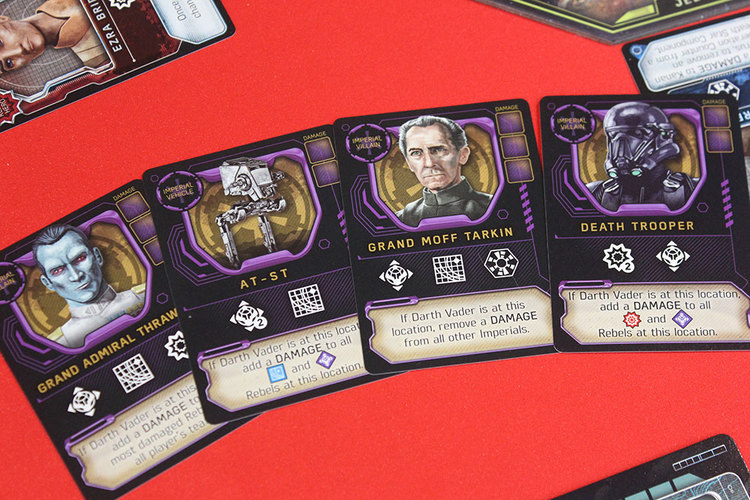 All Rebels and Imperials with full damage at the end of a turn are placed into a discard pile. All spaces are refilled from the asset deck. Any completed Death star components are flipped operational side up. Then play moves clockwise. 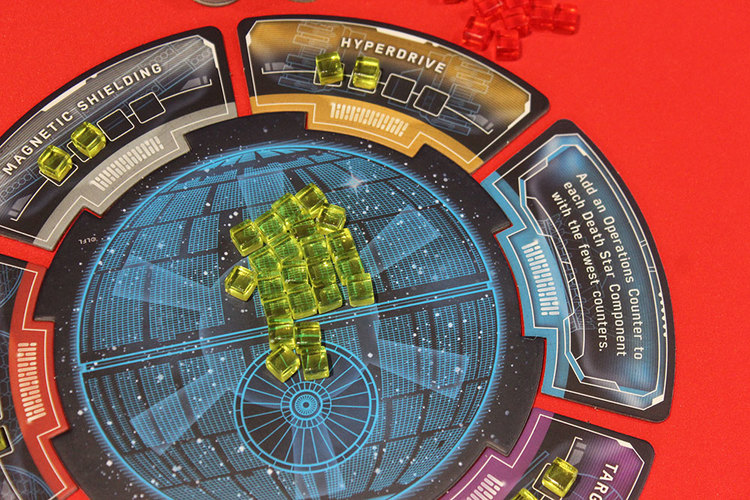 Play continues until either the game or the players have won! The players win if, they have defeated enough Imperials, for an easy game defeat seven out of the eleven in the deck. For increased difficulty up this number!

The game wins if, All components of the Death star become operational, if ten or more Rebels are defeated or if any one player loses all members of their Rebel team.

If you like your co-op games tough, this is one for you, even on the easiest setting (trying to eliminate seven Imperials) it constantly felt like we we’re always a step behind, working for damage limitation rather than making any real progress, reacting rather than acting! It’s never satisfying when something is too easy, and Dark Side Rising gives you a run for your money. You’ll build your team of Rebels and before the end you will have lost half of them in the fight. But anyone who’d watched Rogue One will know that not every Rebel makes it out alive, and yet the fight goes on. I can’t say I know everything about the Star Wars Universe but the artwork appears to present characters from both the films and the animated series (we haven’t seen) together in a pretty consistent art style, and the Darth Vader bust should probably just remain out on your mantlepiece. 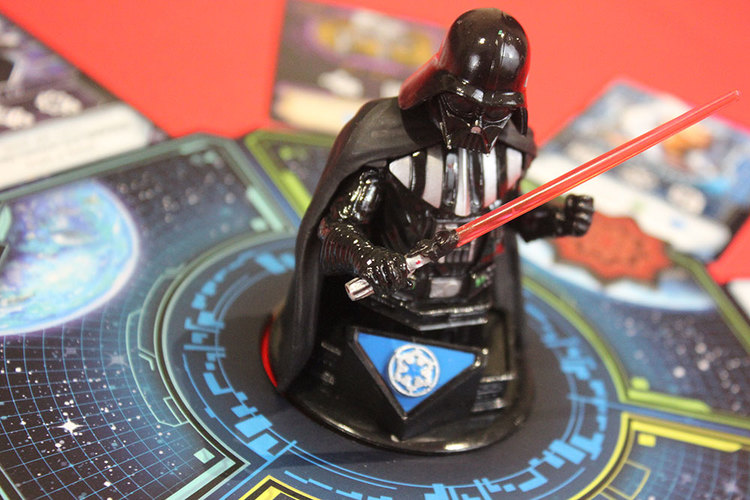 First, the most important rule of this game: you must hum The Imperial March the whole time whilst playing! OK, we ended up just playing the soundtrack to Rogue One instead bu... Continue reading →