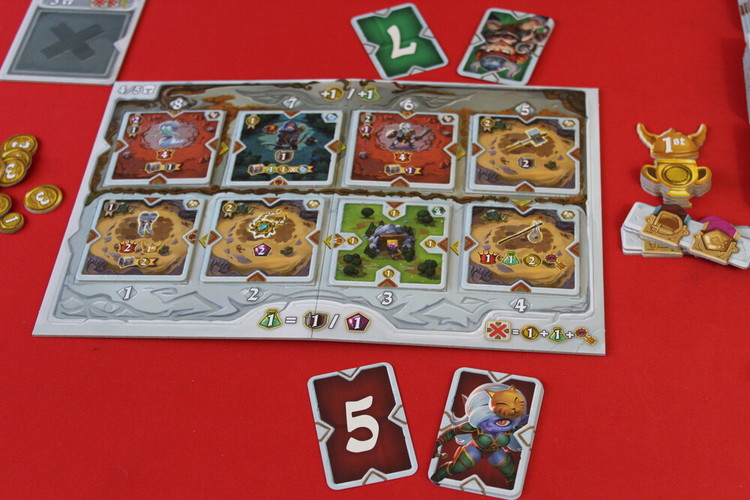 I like dungeon crawlers, it takes me back to my role playing days. What I don’t like is a tonne of fiddly little token, plastic minis and the piles of stuff that generally comes with them (along with rulebooks the same size as most RPGs!). I want something quick, light-hearted and fun. This is where Tales of Glory comes in! 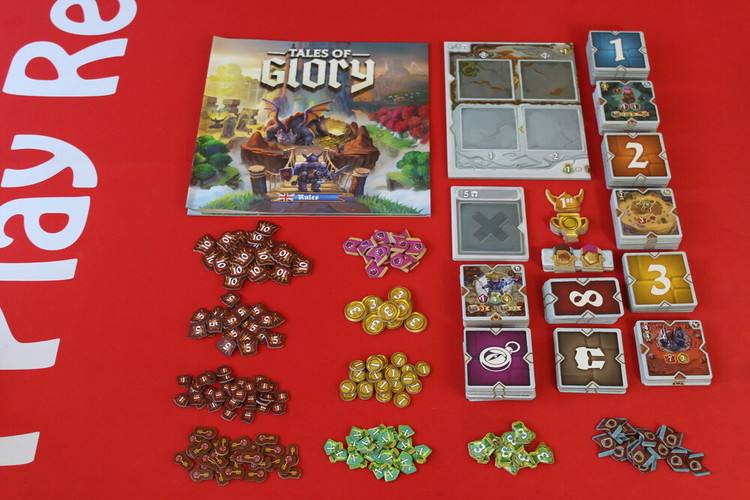 Place the main board in the centre of the table with the correct side up (six spaces for 2-3 players and 8 spaces for 4-5 players) Place all the tokens in reach of all players. Find the appropriate discard tile for the number of players (this is shown on the top left) and place this next to the main board. Sort the tiles into piles with identical backs: Ages 1,2,3, Quests and Heroes. Shuffle the three Age piles and place them next to the board. Each player takes a Hero tile at random and places it in front of them to start building their board. Then take the selection cards that match that character and a banner. Take the starting bonus as shown on your character, this will be magic and/or combat points which are placed next to your banner and potions and/or gold. Deal each player three quest tiles. They discard one and place the other two face down in front of them. During their turn a player may play one or two of these tiles before or after taking a tile from the adventure board. They must pay the cost just the same as any other tile. The quests are an optional extra that you may play with or without. Fill the main board up with adventure tiles from the 1 stack. The starting player takes the starting player marker and you are now ready to play!

Each turn consists of obtaining tiles, playing them and taking the appropriate benefits. To start with, each player secretly chooses which tile they want to take. They do this by placing the selection card that matches the tile number face down in front of them. When all players have decided, they reveal their cards simultaneously. Beginning with the start player and taking it in turn order, they take the tile of their choice if they can. Players who were unable to take the tile of their chosen then, in turn order, may choose one of the remaining tiles. Then, the first player marker changes hands. The player who took the tile from the lowest numbered slot takes the first player token and becomes start player from this point on.

In the new turn order, players must pay for and place the tiles they chose. The top left of the tile shows the cost. Any tiles taken from the top row of the main board cost an additional coin or potion. To pay for a tile, a player must have enough coins and/or potions in their personal supply to pay for it. To pay for a tile that shows combat or magic points, a player must have at least that many of the corresponding tokens on their banner. If you do not have enough you may use a potion to lower the cost of either by one. Any number of potions may be spent and are placed back in the supply. If a player cannot or does not want to pay for a tile they selected, they may discard it by placing it on the discard pile and taking one coin, one potion and key which they must use immediately. Rewards from tiles are only granted after they have been placed and therefore cannot be used to pay for tiles. 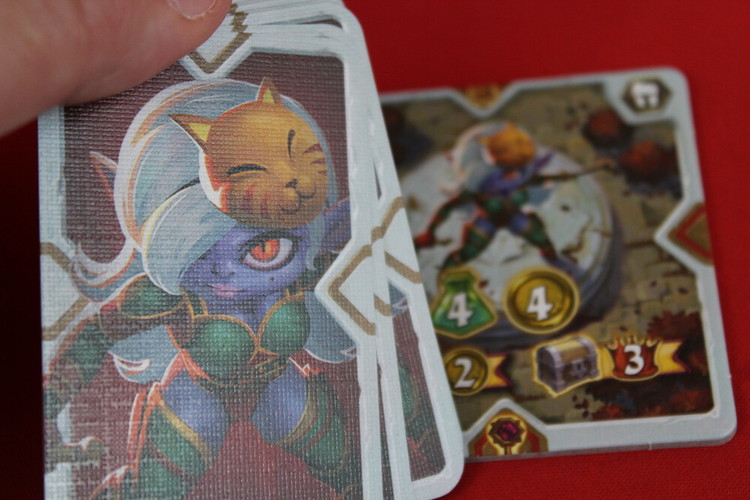 Once a player has paid for their tile, they can add it to their individual board. All tiles must face in the correct direction, with the illustrations right way up in relation to the player placing them. They must always make at least one connection with another tile. Connections may be empty, form a key or even contain half a key. Tiles may never be placed so a connector is next to a blank edge on an adjacent tile. Once a tile has been correctly placed, you may collect the reward shown on it.

Some cards have an hourglass symbol on them, this indicates end of game points rather than immediate. Place tiles have special connectors if you connect them to the marked tile type you get the bonus shown. Some connectors show half keys. If you make a connection and complete a key, take a key token that you must use immediately to open a chest. This key must be used on one of those tiles or on your Hero Tile. Keys gained from discarding a tile may be used anywhere. Place the key token on the appropriate chest and gain the rewards shown. The rewards from a chest may only be gained once per game, therefore there can never be more than one key on a chest. 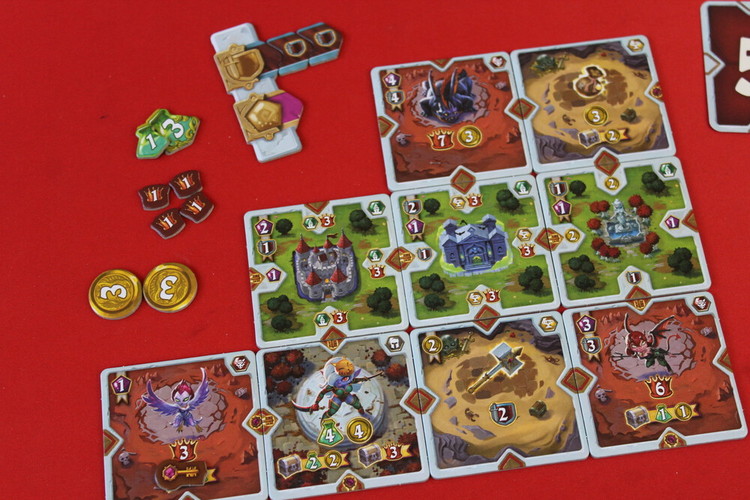 After everyone has placed their tiles and gained all rewards, set up for the next round. Discard as many tiles as indicated on the discard tile board (this will vary depending on the number of players) Slide the remaining tiles around the main board, following the arrows. Draw five tiles from the Age 1 pile to refill the board, when this is empty, draw from the Age 2 tiles, then move onto the Age 3 tiles. At the end of ten rounds, you will have used all the tiles, the game will end and final scoring happens!

Tales of Glory is a fast and fun dungeon crawler. It also gives you an RPG feel without having to rely on a specific group, having someone GMing or having huge rulebooks.