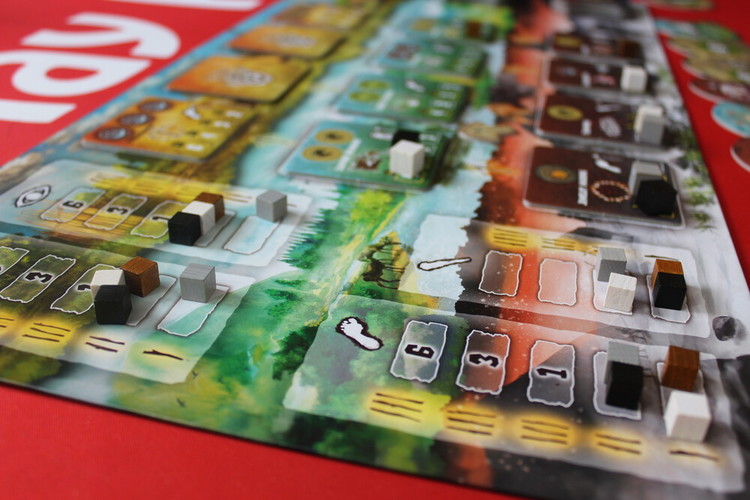 I remember, back in the early 90s, when Sid Meier's Civilisation came out for the PC. This was me falling in love with Civ games! My first sighting of tech trees and civilisation advancements. So, a few years later I still love civ games and I’m happy that’s something that’s translated over to board games well. However, they can also be the sort of game that takes a civilisation to play and comes with so many pieces you feel like you’ve aged an epoch before you’ve even got started! Tribes plays in around 45 minutes, is simple to learn and has a really interesting mechanism I’ve not seen elsewhere.

In Tribes: Dawn of Humanity, players lead their tribe through early epochs of history, starting in the Stone Age and leading them through to the Bronze Age. In the box you get: 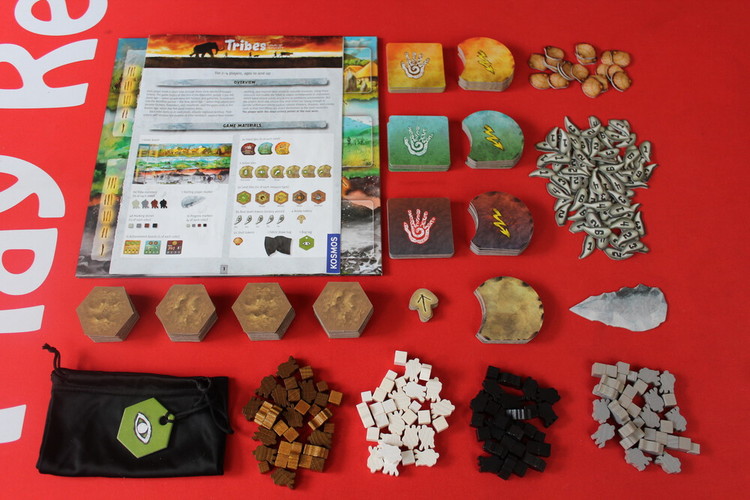 If this is your first game, attach the bag tag to he drawstring on the bag. Place the board in the centre of the table. Give each player the pieces corresponding to their colour - 15 tribe members, 4 progress markers (small cubes) and 12 marking stones (larger cubes) Also give each player one arrow token and five shells. Everyone places their progress markers at the bottom of the four tracks on the left-hand side of the board. Place the fifty land tiles into the bag and mix them up. Each player then draws three tiles to make up their starting territory. If you draw two lands of the same type, redraw until you have three different types. Place the three tiles in a triangle shape so each is touching two sides. The placement is up to the player.

Shuffle the six action tiles and place them in a row next to the game board - this is the action sequence.

Shuffle the achievement tiles according to colour and place four face-down on the corresponding row of the game board. Place the left-over tiles (one of each colour) back in the game box. Turn the tiles in the bottom row face up. Sort the achievement tiles by colour, shuffle each stack and place them next to the appropriate row. Choose a starting player and give them the token. This won’t move during the game but will be used to note the end of the round at game end. 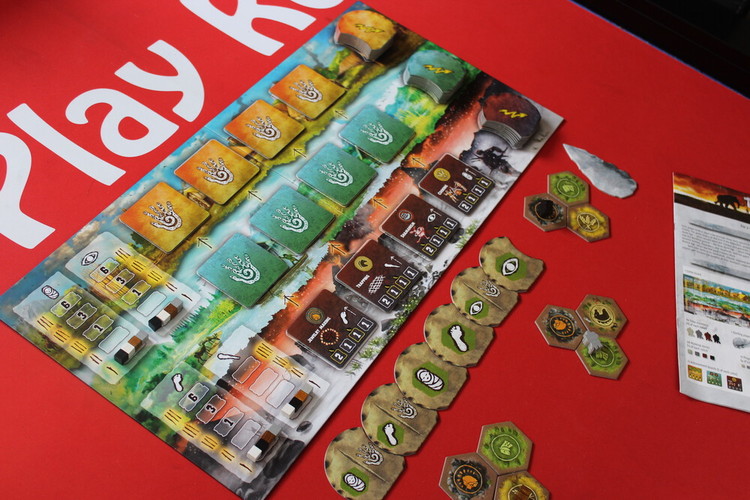 You are now ready to play the game!

At the start of the first turn, players place a tribe member on one of their tiles. The starting player goes first and players go round the table, each placing one tribe member.

The player must select an action from the action sequence. The first tile in the sequence is free to play. However, if that player chooses a tile further down the sequence, they must place a shell onto each tile they skipped. If someone later takes a tile with shells on, they also receive the shells on that tile. Three of the tiles show a single action, these are procreate, move and explore. 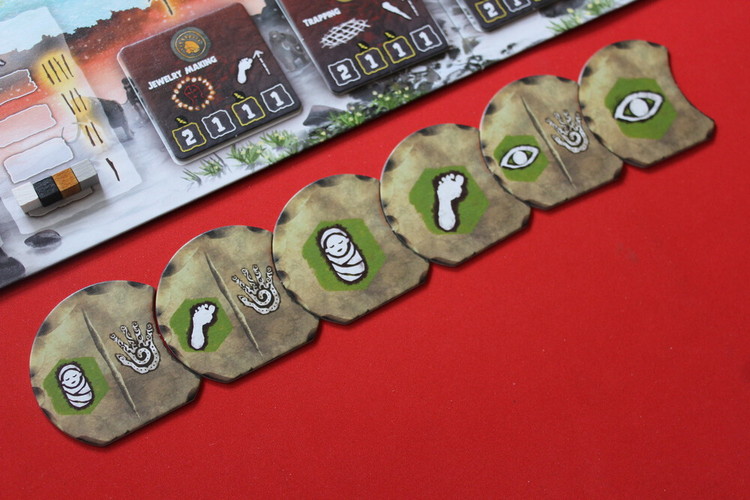 The player takes a number of new tribe members as indicated by their position on the procreation progress track. These tribe members go onto their land tiles. They must, however, go onto a space that already contains tribe members, they cannot be placed onto empty land tiles.

The player can move their tribe members up to as many spaces as indicated by their position on the movement progress track. One movement is one tribe member moving one space. You can split movement however you like between tribe members.

The players draws as many tiles from the bag as indicated by their position on the explore progress track. After drawing all of their tiles, the player places them anywhere they choose as long as they are adjacent to other land tiles. 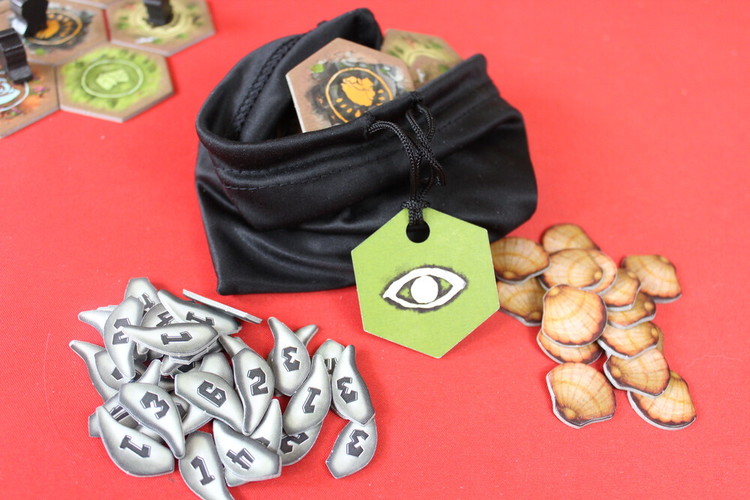 Three of the action tiles are split and show the above three actions and also have the Complete an Achievement Symbol on them. Using one of these tiles, players may choose to either do the action or complete an achievement, they may not do both.

All players must start by completing achievements in the lowest epoch ie the ones shown in the bottom row. A player must possess the required resources as shown on the achievement tile by having at least one tribe member on a land tile showing that resource, no goods are actually handed over. The player then places one of their marking stones on the first available placement on the tile and receives the number of points shown in bear teeth. If there is a lightning bolt symbol above the space then the top event tile for that epoch is revealed and added to the end of the event sequence. Each achievement tile shows an advancement symbol, move your progress marker up one space on the indicated track. When the first marker is placed on an achievement tile, this unlocks the next level on this column, flip over the tile above it. This achievement is now available to players. 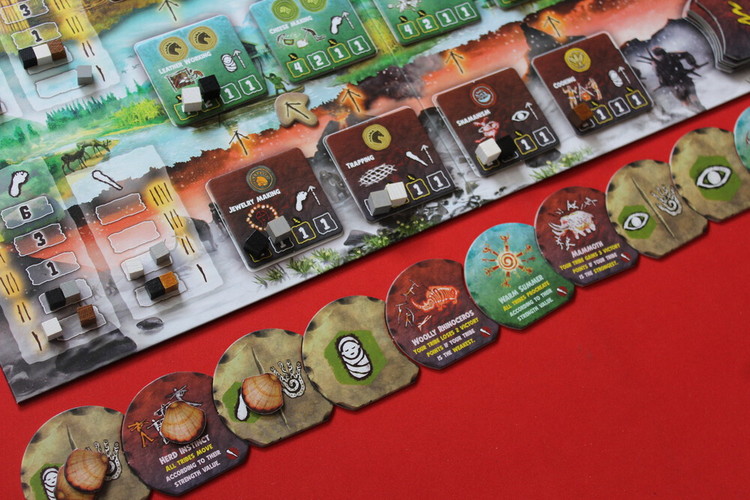 Players are only allowed to complete an achievement when they have unlocked the preceding tile. However, the arrow token each player has allows you to ignore that rule. You may place the arrow token between an achievement you have a marking stone on and a diagonally adjacent one in order to complete it. Also, if you are stuck at any point you may use land tiles as wild resources. You can choose a land tile you currently have tribe members on and flip it over in order to gain a resource of your choice. This land tile is now exhausted and may no longer be used as a resource. 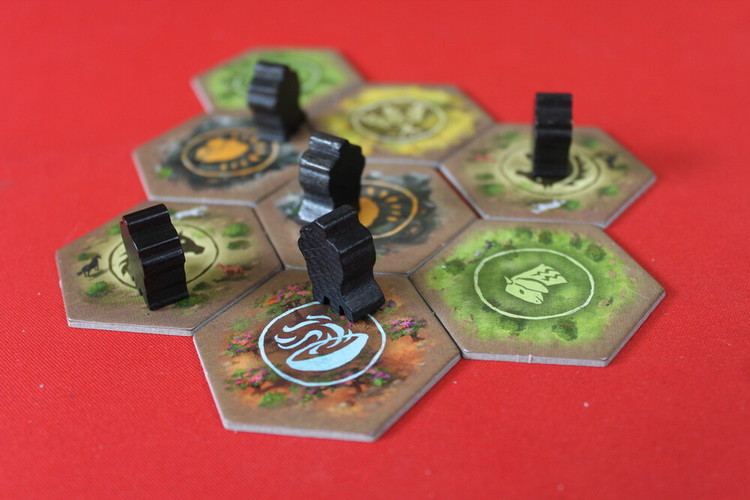 The game ends when a predetermined number of event tiles from the final epoch have been activated (remember, events don’t trigger until they are selected from the action sequence) Then play to the end of the round.

I love the fact that Tribes is a thematic civ game that plays in under an hour. There is a page of information detailing the different epochs depicted in the game and the resources. I’m not won over by theme in games but I like it when there is this level of attention to detail, it shows care has been taken with every element of a game. The action sequence mechanic is really nice, something I’ve not seen before and makes your seashells that bit important. Using them for an action you want one turn could mean you are left with a poor choice of actions for the next. Tribes also scales nicely, something that is a bit lacking in civ games, it plays as nicely with two players as it does four.