Posted on October 13, 2017 by Katrina Demeanour 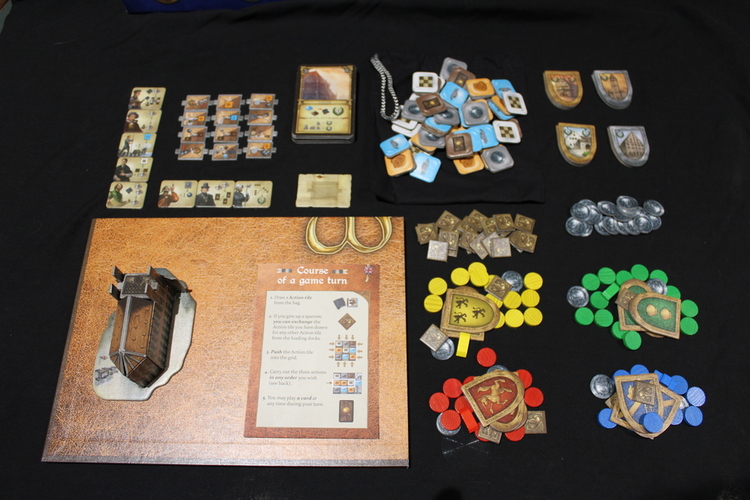 At the beginning of the 16th Century Ulm is one of the largest municipal territories within the German Nation. Success and wealth are the result of citizens business acumen and craftsmanship. Will you go down in the annuls of history as one of Ulms’ important citizens?

The game is played over ten rounds, you will get three actions each round.

To set up, each player gets a barge, 13 seals and 3 crests in their colour as well as 2 coins, 2 ulm sparrows and an action tile drawn at random from the bag. Randomly choose four of the eight descendant tiles and put them in the Oath Quarter House, shuffle the cards and place them on the board and place the Cathedral on the board. Randomly distribute 1 brown, 2 turquoise, 2 white and 2 gray action tiles in the 3 by 3 grid of the Cathedral area, then put one tile of each colour in the loading docks. Lastly, choose 10 Tower Tiles randomly, these essentially work as your round markers.

At the beginning of the round, the starting player takes one Tower Tile and puts it on the Cathedral. In the basic game, the symbols are placed face down and ignored but in the advanced game the appropriate action is taken.

Then, the active player draws a tile from the bag and pushes it anywhere into the 3 by 3 grid. Then, they carry out the three actions in a row of their choosing. You may only push out where a tile hasn’t been previously pushed, so players start with twelve options that gets reduced as the game goes on until someone takes the white tile action (see below for action explanations) This is the main heart of the game and a really interesting mechanism I haven’t seen anywhere else 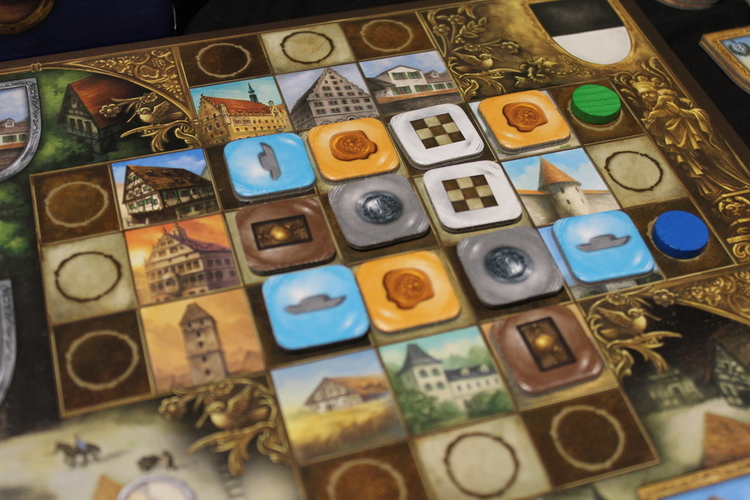 There are five different action tiles as follows: 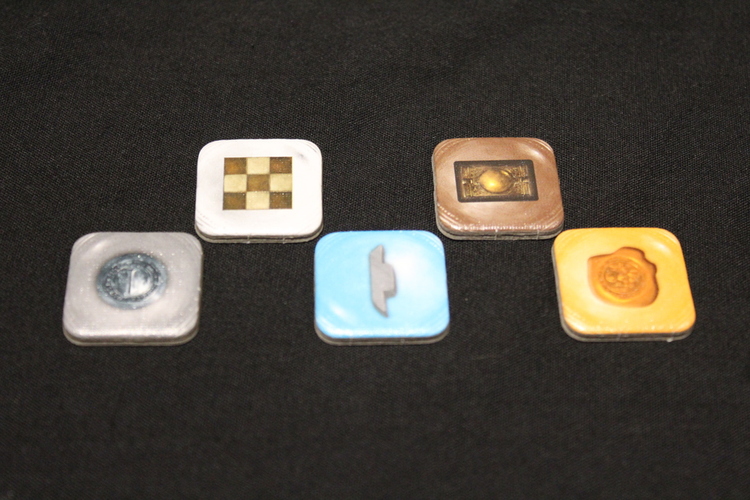 White Tile (Clearaway Action) : Take the pushed out action tiles from any one side of the grid (between one and three)

Blue Tile (Barge Action) : Move your barge forward one space on the river. Spaces containing over peoples barges are skipped and not included in the count.

Brown Tile (Card Action) : You can throw away any two action tiles to draw a card, or, if you discard two tiles of the same colour you may draw the top two cards, keep one and place the other on the discard pile. Alternatively, you may use the card action to play a second card this turn (you are always allowed to play one a turn without using an action)

Orange Tile (Seal Action) : Pay two coins and place one of your seals on an unoccupied space in one of the two city quarters between where your barge currently is. You then receive the corresponding privilege of that quarter as shown on the game board. 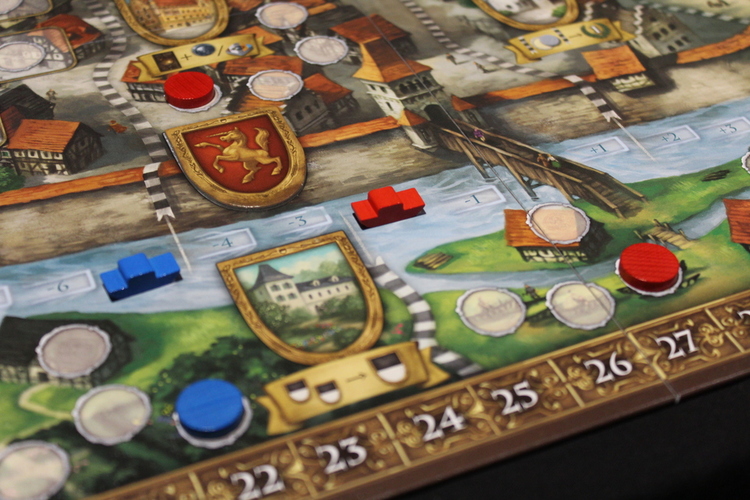 During the game you can use an Ulm Sparrow as a joker to get the action tile you want. Discard the Sparrow and exchange the tile you have just drawn from the bag with on that is currently sat in the Loading Docks area. 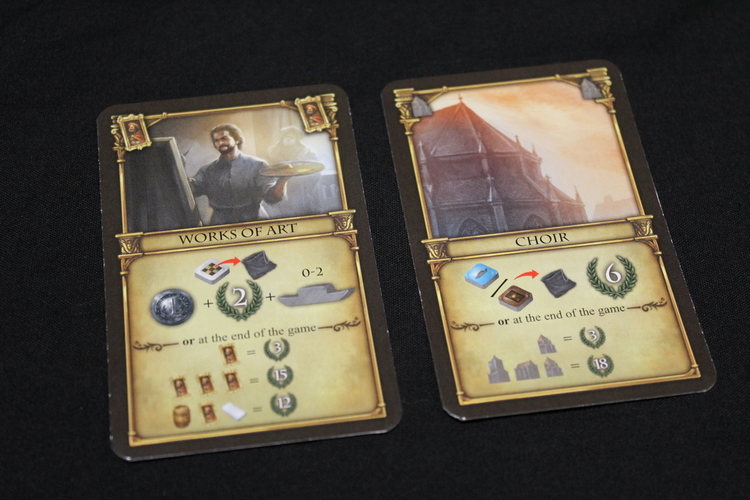 Cards may be used in one of two ways. You may play it onto the discard pile and use the upper bonus of the card at that point, or you may place a card face-up in front of you and obtain the lower bonus of the card at the end of the game. Cards in hand at the end of the game are discarded and worth nothing. You may place one card per turn, however, you can always use the card action to play additional cards rather than drawing more cards.

At the end of the game, points are added for your placement on the river, cards in front of you and one point for every Ulm Sparrow you have. The player with the most points is the winner!

Ulm is a fairly lightweight euro that is pretty easy to learn and teach - five available actions, you can do three a turn. The rules are split up nicely and you have a copy of the ‘Ulm Chronicle’ that details all the area and card special abilities. The tile pushing in the grid is a fun mechanism.

Now, let’s talk about that Cathedral - damn, it’s pretty! But, ultimately it feels wasted, it has no use other than to hold the round markers.

Gameplay and components are all nice, making this a great intro to Euroes or school night game! 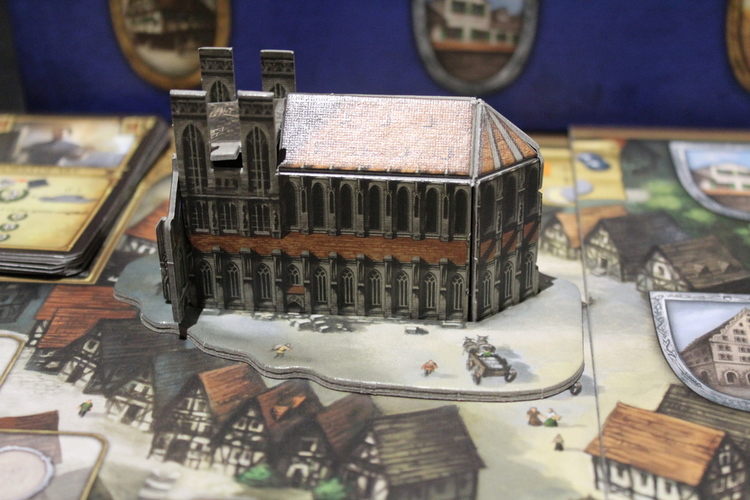