Posted on October 18, 2017 by Katrina Demeanour 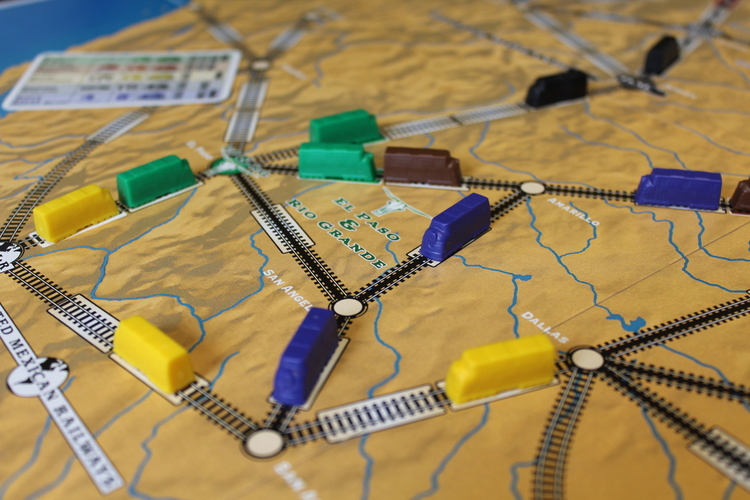 In a gaming world where train games are either ‘family games’ (Ticket to Ride) or heavy-weight (18XX), Union Pacific sits nicely in the middle. It’s a great introduction to some of the concepts of 18XX games. In the box is: 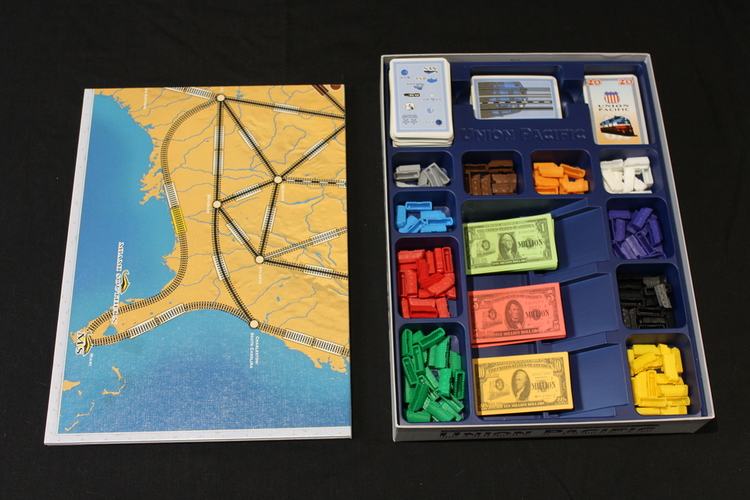 This is one of those rare games where the insert acts as an aid for the game! Place the trains, according to colour in their appropriate place in the box eg. there are 23 green trains, put them in the slot marked ‘23’. The player cheat sheets tell you how many trains there are of each colour.

There are also places for all the different denomination notes, though this is one of those games we use poker chips for rather than dealing with paper money!

Place the board on the table and place the appropriate coloured trains on the matching coloured spaces on the tracks. Shuffle up the track cards and deal three to each player. Shuffle the share cards (Not the Union Pacific ones!) and deal four to each player and give everyone one Union Pacific share. Each player then chooses one of their shares to place on the table, representing their initial investment in one of the companies. Draw four share cards and place them face up next to the board. Divide the remaining shares into three groups, the first with six cards, the second with eighteen cards and the third being the rest of the cards. Shuffle three dividend cards into the third pile, one into the pile with eighteen cards and place it on top of the bigger pile, then finally put the six cards on the top of the deck. 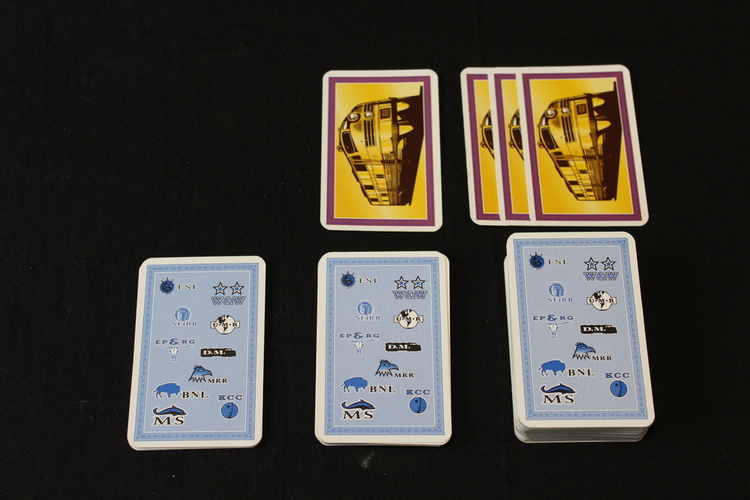 At the start of your turn you draw a track card, then you make take one of two actions. You may either build track and draw a share card or play share cards from your hand. After drawing a track card, a player may choose to invest, to do so, you place shares face up on the table. You may either place one or more shares in a single company or one share from each of two different companies. You finish the turn by discarding a track card (you may never have more than three in your hand)

To build a track, select a card which will determine the type of track you will place on. Select a company you want to build for that can use the appropriate track type. The section of track you build on must be connected to the company's main station via track sections where trains have already been placed. You can play trains for any company, you don’t have to have shares in that specific company. After you place a train, you must draw a share card and put it in your hand. This could be one of the face-up cards, or from the top of the deck or could be a Union Pacific share. Immediately replace the face-up share card, if four of the same are on display, remove them from the game and restock. After drawing a card, a player may exchange any share card from their hand for a Union Pacific share card. The exchanged card is removed from the game.

When a player draws a dividend card from the share stack, place it face up in front of them and draw the next card as normal, if that is also a dividend card, a double dividend is paid out. The amount of a company's dividend is based on the number of trains that have been played for that company, then add one to represent the main station. That company is worth that many million dollars. Not all shareholders of a company will receive a dividend. The player with the most shares is the primary shareholder and will receive the current dividend value, the player with the second most gets half of the above amount, rounded down. Other players with shares will receive nothing. If a player is both the primary and secondary shareholder of a company, they will receive both payments. If players are tied for the most shares in a company, the amounts for primary and secondary shareholders are added together and shared, no one else gets any money.

The Union Pacific shares will pay up to five shareholders instead of just two. The value of these grow throughout the game There are four payouts during the game, they occur when the dividend cards are drawn. After the fourth dividend card is drawn and paid out, the game ends. Total up the cash and the player with the most is the winner!

I first came upon Union Pacific a while back and really enjoyed it, years later it still gets a lot of play from us. As I stated at the beginning, it’s a nice point between the easy and tough train games out there, getting used to stock or track actions is a great introduction to some of the 18XX games out there. The plastic trains are a similar style and quality to Ticket to Ride trains. Everything is laid out nicely on the player aids making it easy to crunch numbers when you need to.

I am sure this will continue to hit the table in years to come too!