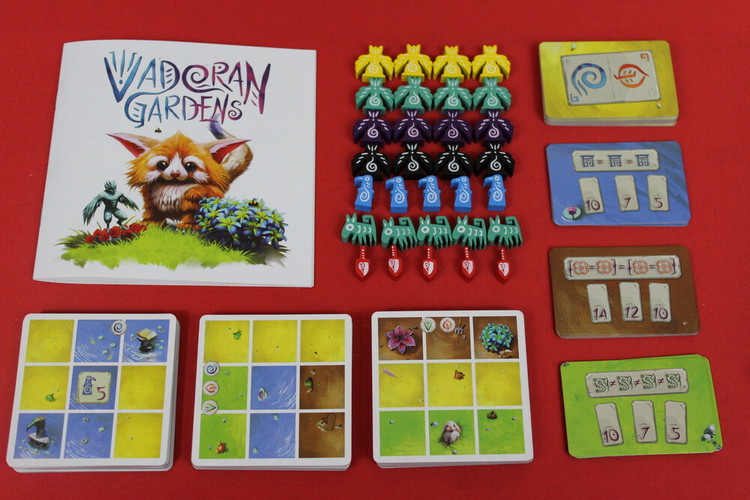 Walk the Path of Enlightenment that runs through the Vadoran Gardens whilst taking time to water the flowers, feed the animals and clean the ancient relics. Vadoran Gardens is a tile (card) laying city building game that is set in the same world as City of Kings. In some ways, these games couldn’t be further apart as City of Kings is a sprawling, co-operative, role-playing game whereas Vadoran Gardens is a small, competitive card game. I love the fact, that with these games a whole world is being created from the heroic adventurer down to the cute animals hiding out in the gardens!

Each player takes the four tokens in their player colour. Shuffle the Pathway deck and deal three cards to each player. This will be their starting hand and they should have three cards in hand at the end of every turn. Shuffle up the Lesson cards and take the top ten from the deck, a new lesson will be revealed each turn so, in effect, these cards act as your round markers (the game is played over ten rounds) However, leave the rest of the deck close by as there is a chance you may need more! Place the first two lesson cards face up on the table, these will determine what type of card you can play each round. Next to each one place a row of Pathway cards appropriate for the number of players, in a two player game you should have two rows of four cards, three players five cards and four players six cards in each row. Place the rest of the Pathway cards nearby. Shuffle each deck of Achievement cards and draw one for each colour (blue, green and brown) Place the lost items nearby and you are ready to play! 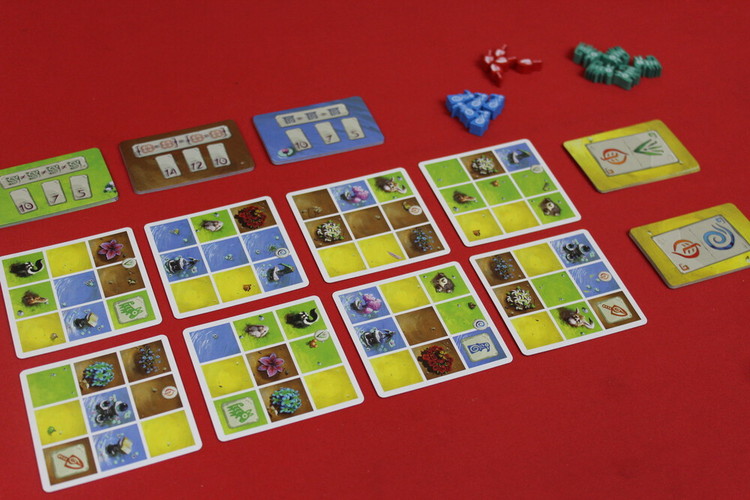 Over the course of the game you will be laying cards in a horizontal row to create paths of water, soil and grass and trying to avoid sand. Paths will score as long as they contain three tasks. For grass this is feeding animals, for soil this is watering plants and for water this is cleaning relics. At the end of the game, each path that contains three tasks will score you one point for every connecting square of the same type. Tasks may be of the same type and still score. 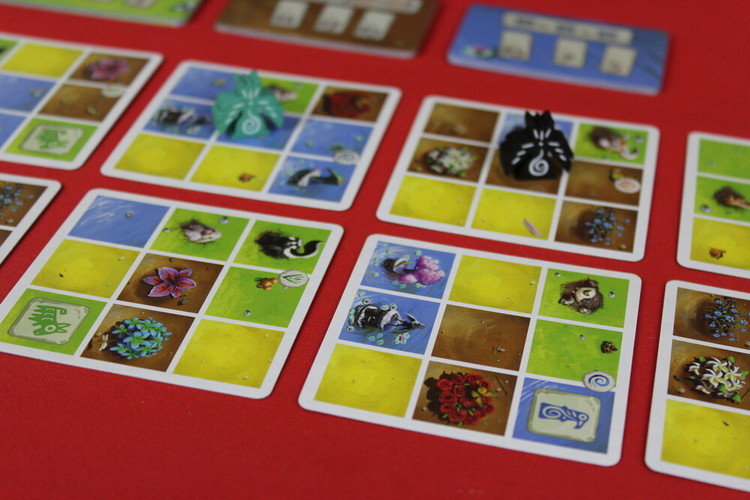 During the game, play will alternate between the two rows of cards, so in the first round the top row will be the active row, in the second turn the bottom row will be the active row etc. Decide on a starting player. That player chooses a Pathway card from the top row to take then puts their meeple on it, in turn order all players place a meeple on their chosen card. Player order is now determined by the position of meeples on the active row. The player whose token is farthest left will play first, then along the row until all players have taken their turn. In a players turn they first, collect the Pathway card their meeple was on and add it to their hand. Then they must play a card, following the Lesson card rules. There are also a few rules for playing Pathway cards (that obviously, don’t apply in the first round!) You must place your new Pathway Card over at least one of the three squares of the rightmost column of the previous card. Cards must always be placed over and never under the previous card and must always be played the right way up ie. with the cards symbols at the top. The total height of your Pathway may never go above five rows tall. As you add to your pathway, keep an eye on the achievements you put out at the start of the game, if at any point, you have completed one, place one of your meeples on the first available slot on the card. You will score these points at the end of the game. Some Pathway cards contain lost items. If the card you just placed has one of the symbols on it, take the matching item and place it in front of you. 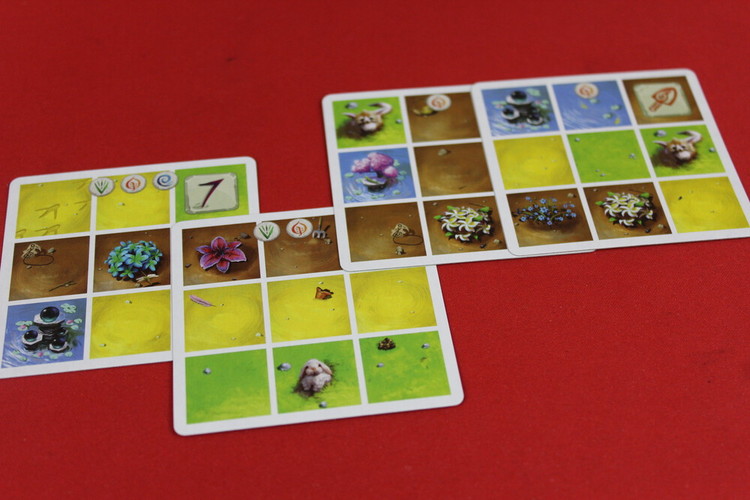 After you have placed a card, you must then place your meeple on a Pathway card in the inactive row, this will be the card you will take next round.

Once all players have completed their turn, slide the remaining two Pathway Cards in the active row along to the left. Then restock the row from the deck. Take the top card from the lesson deck and place it over the previous one. If there are no more lesson cards in the deck, this next turn will be the final one.

Lesson cards primarily determine which type of card you may play in a turn but there are also a few special ones that have special abilities. These may allow you to play cards rotated, play extra cards or even add extra rounds to the game.

At the end of the game, points come from three places:

Returning Lost items: Return any lost items to the correct locations and score the points shown on those squares.

Pathways: For every pathway that contains three tasks score points for every matching, connected area. Some squares contain scoring tablets so don’t forget to add those points on.

Add up your totals and the player with the most points wins!

Vadoran Gardens is a real surprise. On initial looks, it is a small card game, however, the rules on placing cards along with the lesson plans each turn can make this tough and you will frequently have to give up on a current plan when things just don’t go the way you want! Vadoran Gardens is a big game in a small box and the number of variations of different pathways cards, the lessons, objectives and lost items mean you won't ever have the same game twice.

I love the concept of constructing an entire world for your games to be set in, yet making those games so very different.