Posted on February 23, 2018 by Katrina Demeanour 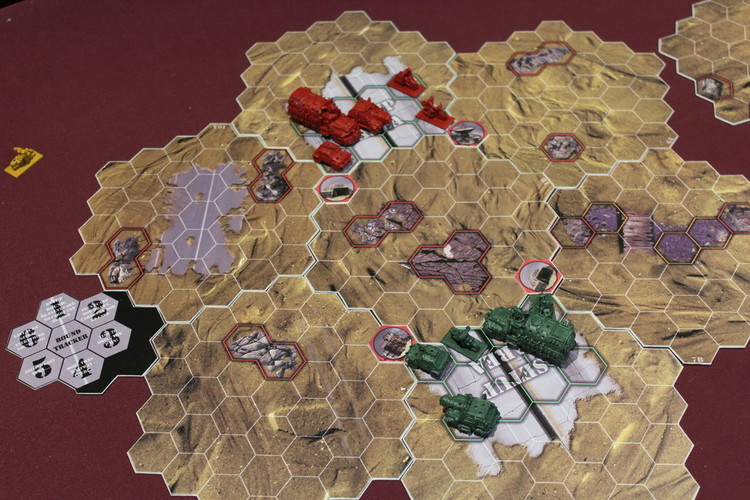 You might want to buckle up, as this is gonna be one hell of a bumpy ride! Wreck and Ruin is a vehicular skirmish game for between 2 and 4 players. You’re not only fighting against your opponents, but the world itself. Have you got what it takes to survive and live to fight another day?

In the box you will get: 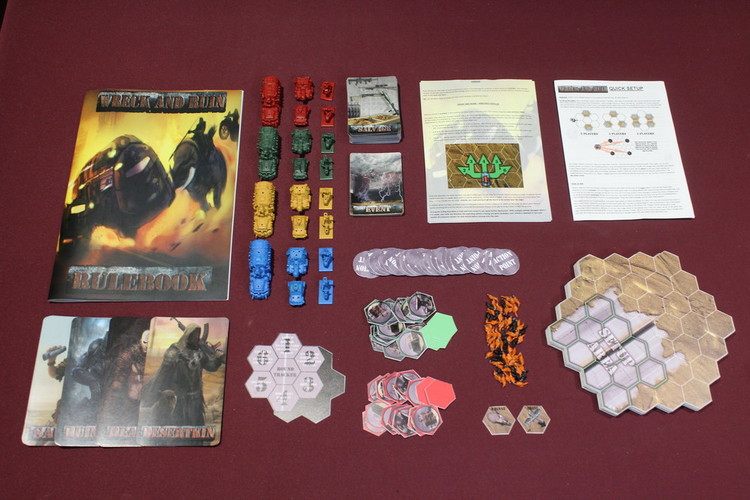 Set up the starting tiles in the appropriate places, depending on the number of players, then place random hexes to form the main board, with a total of seven hexes. Attach the round tracker to the side with the ‘1’ facing up. A 4 player game will last three rounds, 3 player five rounds and 2 player four rounds. Place a salvage token on the four red hexes on the board. Each player takes a set of vehicles, dice, as set of Faction cards (of which they choose one) and a salvage card at random from the deck. The start player sets up their vehicles in their set up area, then player two and so on, until everyone has placed.

The four Factions;  The Reapers, The Ruin Army, The Desertkin and The Salvoes, all have their own skills and distinct advantages, with a back story that appears in both the rulebook, and has been expanded upon on various social media. 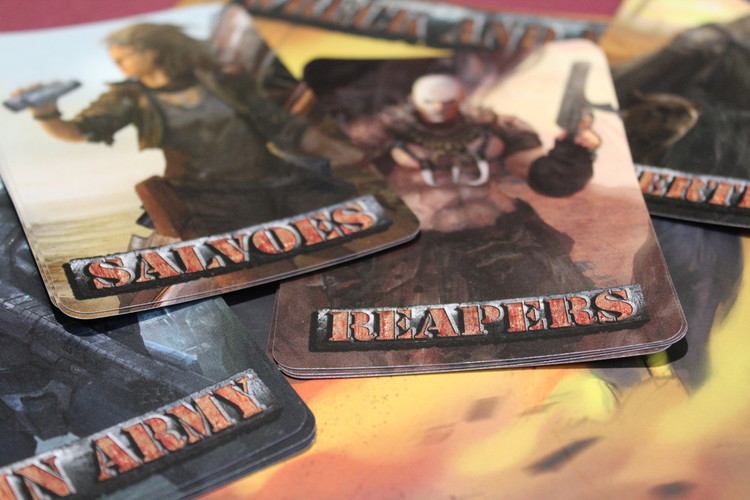 The aim of the game is to capture salvage tokens. Players capture one by moving a vehicle on top of it during their turn. At the start of the next players turn, all red tokens with vehicles on top are flipped to the green side, if you manage to stay there for a turn, the marker is yours and you also receive a salvage card. However, if at any point that vehicle takes damage, it will flip back over to the red side again as it is a contested site.

When a token is taken, the player whose turn it is must place another on the board so there are always four available. Roll a dice and compare the result to the round tracker - that token must now go on the hex indicated.

At the start of a turn, the top event card is revealed, these are brilliantly thematic and will usually be weather conditions that cause problems for all players, be it a sand storm reducing visibility or the sun overheating engines and restricting movement.

During your turn you have 5 action points to use. A single vehicle can only complete two of these actions and they must be different.

All actions cost one action point:

Any vehicle can spend one action point to move up to the number of hexes shown as its ‘move’ value. Turning also counts as one of these points. If you need extra movement in a turn, you may choose to use the ‘Full Throttle’ option. To attempt this, it must be the first, and only, action that vehicle takes this turn. Roll a dice and deduct the vehicles size from the result, you then get that much extra movement.

Attack another Vehicle in Range

Every vehicle has a three hex range from the front. You cannot target something that is not in range or is blocked by another obstacle. Roll a number of dice equal to your vehicle's attack value. Compare each roll against the targets armour value. Each roll that is equal or higher is a hit and causes one point of damage. Any sixes count as a hit and grant you a free extra roll. Now, this is the fun part! Each vehicle has a number of small holes equal to the damage they can take - insert a number of flames into the vehicle equal to the amount of damage it has taken. This is a great idea and easily gives you a visual impression of how damaged a vehicle is! 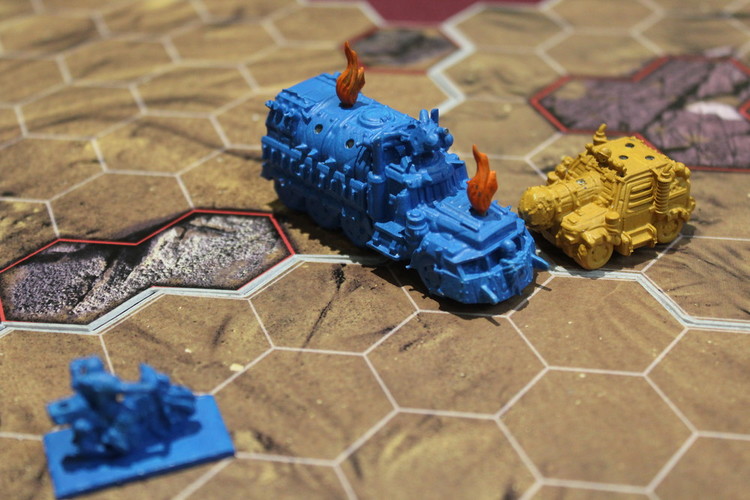 This works in a similar way to attacking as above. Roll a number of dice equal to your armour and compare to the targets armour value. Count up the number of successes and add it to the vehicles size. However, now, the defender has a chance to block some of the damage caused. They roll a number of dice equal to their armour (minus one if rammed from the side or two if rammed from the back) Again, they compare it to the attackers armour value and any rolls equal or higher counts as success and add their vehicle size stat. The two final totals are compared. If the attacker has the higher score they may push the target into one of the three hexes behind it and takes one damage for each difference in the scores. If the defender has a higher score they were lucky this time! If they are larger than the attacker they then do one damage for the difference in size stats and neither vehicle moves.

Searching a wreck for salvage

If you are adjacent to a wreck you can choose to salvage from that wreck. The wreck is then removed from the table and you get to steal a salvage card from the player who owns the wreck. These Salvage cards can be very powerful and will either help you or hinder your opponents. 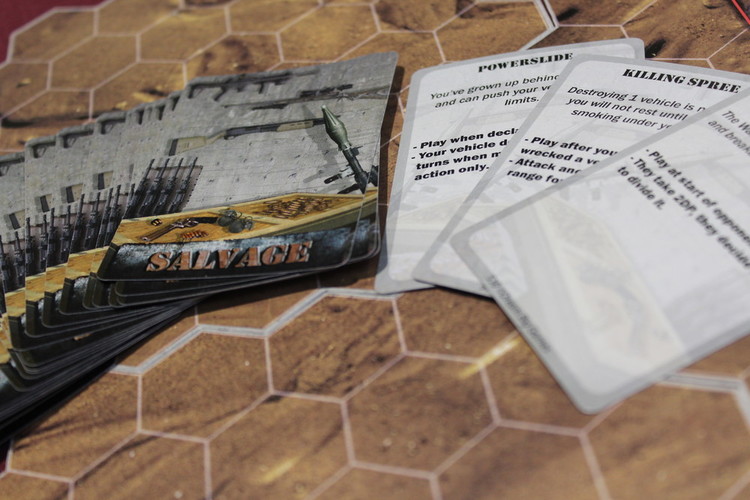 Attempt to repair a wreck

You’re going to be taking a lot of damage so repairs are a part of everyday life! Any wrecked vehicle can attempt to repair itself. Roll two dice, remove one damage for each roll equal or higher than the vehicles armour. If you roll a six, again, you get a re-roll. You may do this action as many times as you like (Action points allowing!)

Bring a vehicle back on the board

In some situations vehicles are removed completely from the board. A player can choose to bring them back on in their starting area by taking this action. It returns fully damaged minus one hit. You can use extra action points to repair it (as above) but it cannot be used for the remainder of that turn.

When a vehicle takes maximum damage it will continue to travel until it comes to a halt, it can also cause damage to nearby vehicles in the process (you didn’t think this was gonna be easy now, did you?) Roll a dice to see which direction is it going to travel in, then roll a dice to see how many squares it will travel. This is where vehicles can crash and burn off the board! 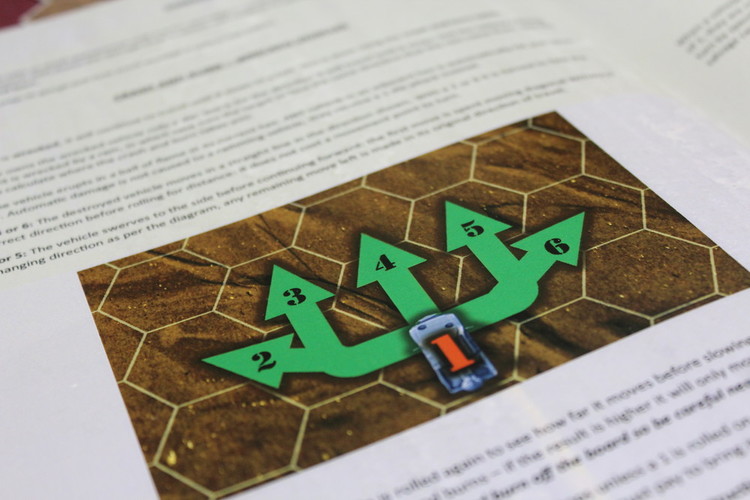 The vehicles themselves are all awesome and each have their own, strengths, weaknessess and special abilities. Each player has five vehicles, two scout bikes, one buggy, one wrecker and one big rig.

Scouts - These are the fastest of all vehicles, however, they are also the most fragile!

Buggy - Not quite as fast as scouts but more armoured, they can also repair other vehicles.

Wrecker - Their job is to ram everything else off the road. They have the best armour available.

Big Rigs - These beasts are slow to move, take up two hexes on the board but can both dish out and take a serious amount of damage. 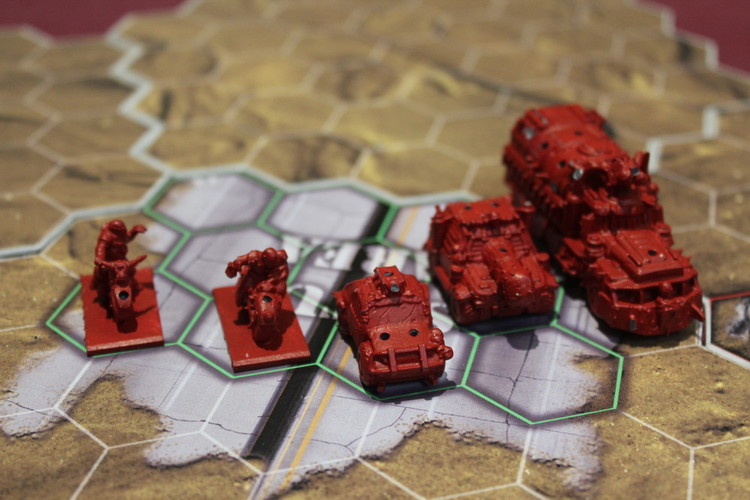 So now you know what you've got, get out there and grab those salvage tokens, causing as many wrecks and ruins as you can on the way, the route to victory will be a bloody, burning battled. The game as much about preventing your opponents from collecting salvage as securing them for yourself.

The variation of in the salvage deck, the chosen Faction ability and the random events mean that no two games will ever be the same and your strategy will constantly be changing accordingly. Once you have mastered all the basics there are several advanced variations detailed in the back of the rulebook as if things weren't hard enough. Wreck and Ruin creates an immersive and theatrical gameplay experience, which is a complete table top game in a one box. 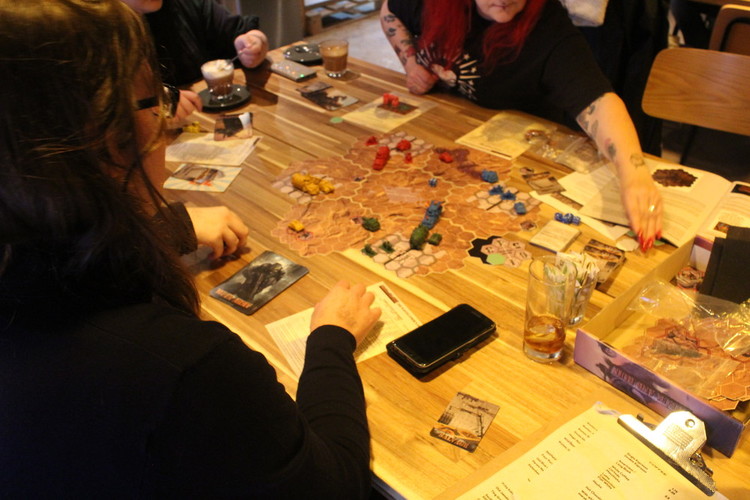 Look out of the Kickstarter going live on the 6th March 2018. The game's designer Mark McKinnon and the Dream Big team will be demoing at Airecon in the middle of their campaign.