Posted on October 09, 2017 by Katrina Demeanour 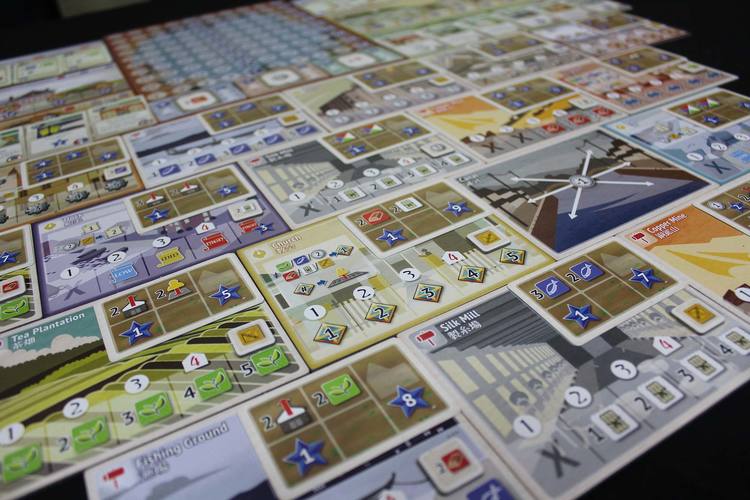 Once a sleepy, fishing village, Yokohama opened up for foreign trade and became the premier hub of trade in all Japan. Firms were established to export Japanese products in exchange for foreign technologies and cultures.You play a merchant trying to achieve fame and fortune through successful business deals and transactions.

I love bits, dice, meeples, cubes, cards, give me all and more! This is where Yokohama truly delivers! Packed inside the box is: 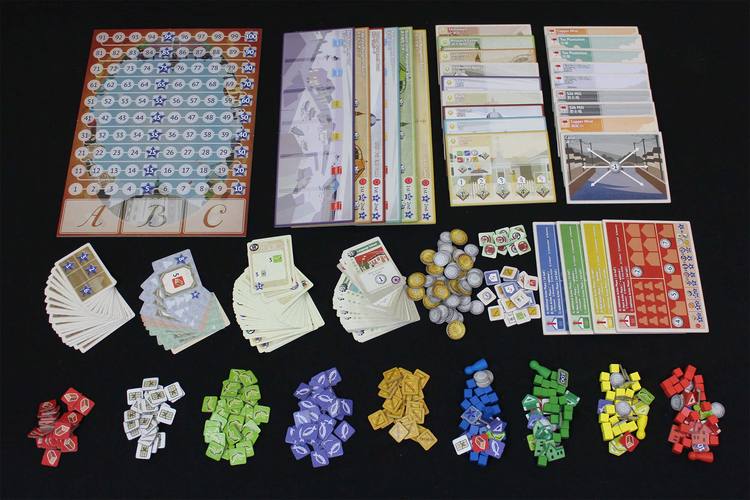 This, combined with how big the board is can make this quite an overwhelming game initially, however, this is one of those beautiful games where you play a couple of turns and think ‘I’ve got this, what was I worried about?’ Firstly, randomly layout the area boards and management boards according to the number of players. This is shown nicely in the rulebook and also clearly marked on the back of all the boards. Place the score track in the middle at the top. Shuffle up the building site cards and randomly place one on each area board, do the same with the 5-power tokens. Randomly picked one achievement from the A,B and C piles and put them on the bottom of the score board. Stock up the tech and market boards.

Your board should look a little like this: (4 player) 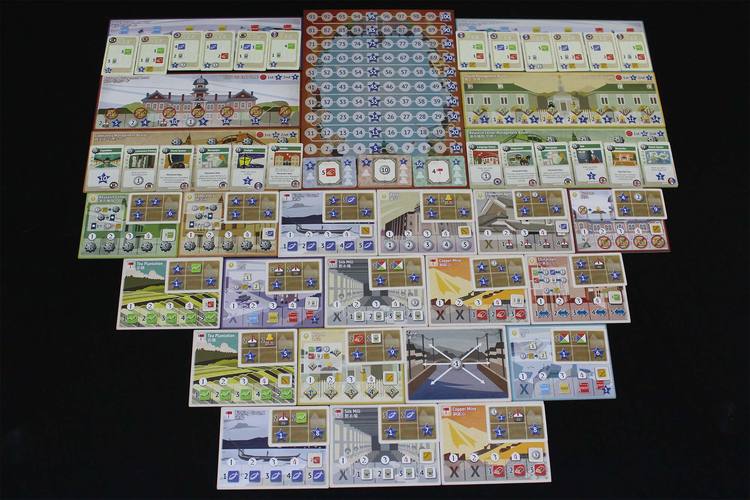 Now, fill up players warehouses which should leave them with 8 workers and 2 shops free to play with, one of each resource type (green tea, fish, clay and linen) and yen depending on turn order (start player gets three, second place gets four etc) and you are ready to play!

Place either one assistant on three different areas or two assistants on one area. You may place where there is an opposing president, but you must pay one yen

The area your president lands on is where you will do your action for the turn. Depending on how much ‘power’ you have on that square, depends on the strength of your action. If you have four assistants and your president on an area that would give you a power of five. In this case you would get five green tea, you would get to take the five power bonus and also the opportunity to build on that area. 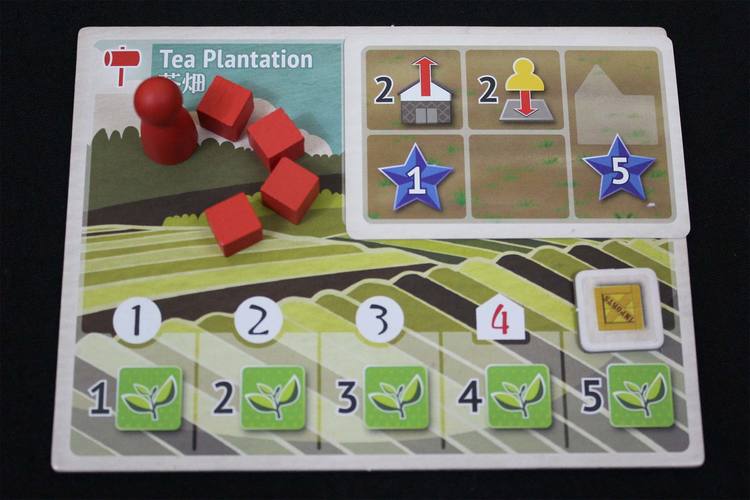 Buildings in an area increase your power on subsequent turns and also give you bonus coins if people complete actions in areas you have Trading houses. When you place buildings in areas you will also get the associated bonus. Most of the areas on the board will give you resources, these may help you complete achievements or contracts (which are obtained from other areas on the board). The Employment Agency area allows you to remove pieces from your warehouse, allowing you to then place them on the main board. The Port and Dock allow you to take contract cards, these can be fulfilled in any of your turns and give you points and/or other bonuses. The Laboratory and Research Centre areas give you technology points that can then be spent on cards from the corresponding area, these have a wide variety of bonuses that will help you out during the game, there are also bonus points at the end of the game for the players with the most points spent on technology.The technology and contract cards have flags on them,if you get a matching pair you get a single-use foreign agent, these can be used for an extra action in your turn, and are used the same way as a president would be. The other management boards in the game, the Church and Customs boards, add a bit of area control to the game. On their corresponding area you can sacrifice resources for a place on these boards. At the end of the game, points are awarded for area majorities on these two boards. 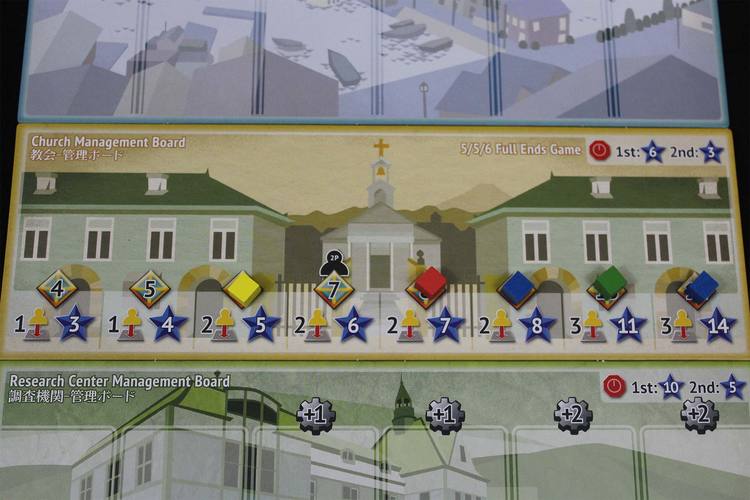 The game ends when any players builds their last trading house or shop, when the contract cards run out or when a certain number of assistants have been placed on the Church or Customs House (this number varies with player count) Finish the current round and play one more complete round. Points are then added up. There is a very handy guide to end game scoring on each player aide (useful to watch during the game!) But points are scored for Church and Customs boards, Technology bonus, there is also a bonus depending on the different flags on your contract and technology cards, remaining goods and coins are worth a small amount of points. All the points are tallied and the player with the highest is the winner! 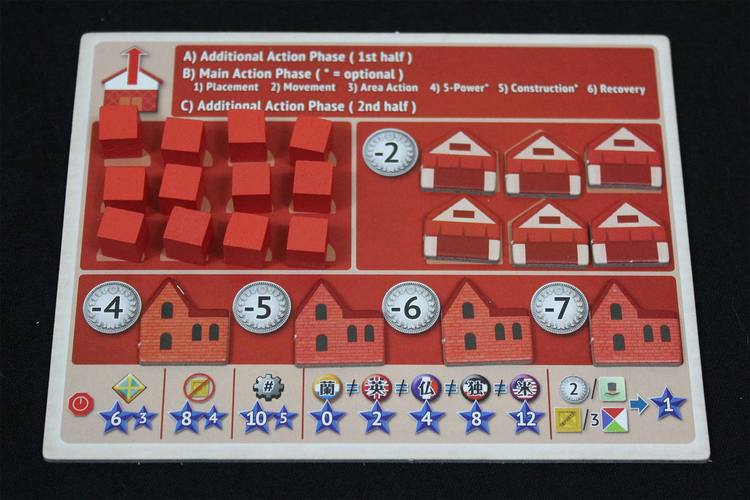 Yokohama looks terrifying when you first lay it out, there is a lot of iconography, a lot of stuff going on and a lot to take in, however the very simple turn sequence means the actual game play really clicks after a turn or two. Several aspects of the game feel ‘familiar’ meaning experienced gamers will have no trouble at all, though overall it feels like a completely different take on any of those games. The bright, thematic artwork is a joy to behold and means everything is easy to read (once you get your head round the icons!) Replayability is massive with the fact the area tiles are laid out randomly, the achievements are randomly selected and of course, the contract and technology cards are all randomly drawn. Being a Euro game fan this obviously ticks all the boxes for me and the ‘trail laying’ of your assistants to allow your president to travel is a really nice twist on other worker placement options.