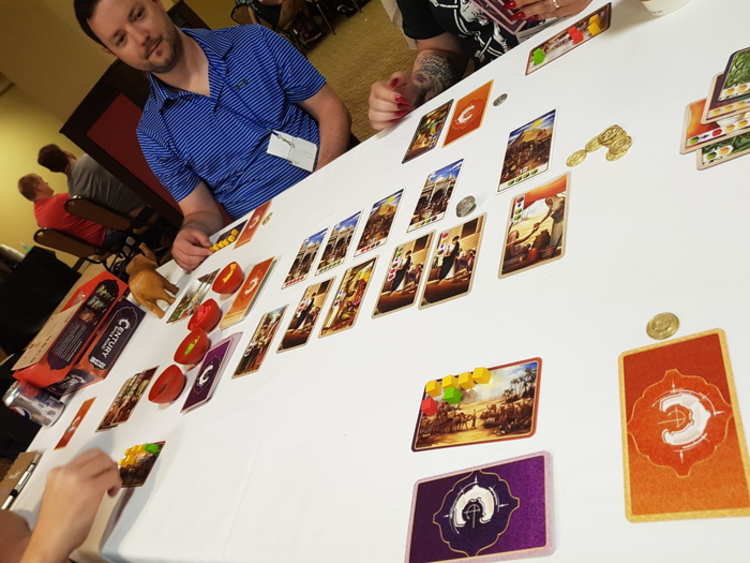 Yesterday afternoon I got back from HeavyCon in Denver, tomorrow I leave for UK Games Expo in Birmingham!

Heavy Con is very different to most other conventions in that it is intentionally small, invite only and targeted to specific types of games. I actually played 17 games over the course of my six days there, however, some days I only played one or two games. Here is a very brief overview of what I got to play!

Tesla vs Edison (with the Powering Up! expansion) - I played this Wednesday night after a very long day especially when you take the seven hour time difference into account! I have played the base game once and really enjoyed it so this was a great opportunity to refresh. The expansion adds quite a lot to the game and it’s one I look forward to taking off my shelf of shame soon! 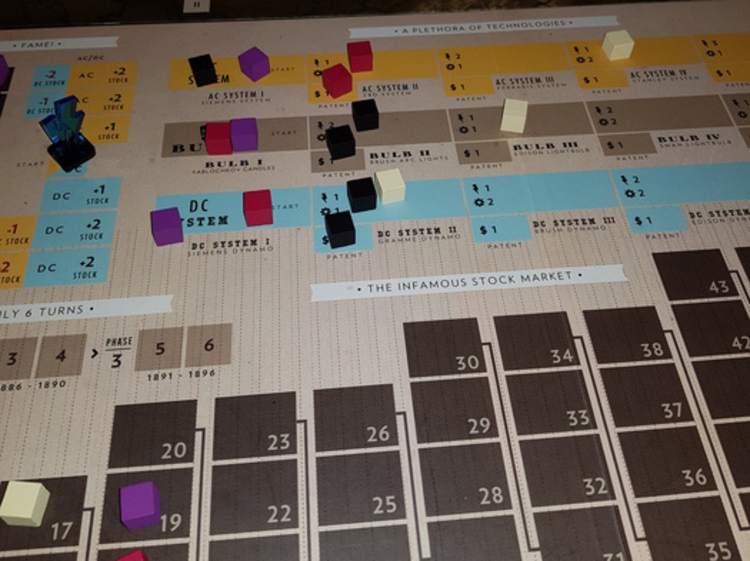 The Scarlet Pimpernel - This is currently an Eagle-Gryphon Games prototype that had been bought along. Like Tesla vs Edison it is a solid medium Euro game rather than a true ‘heavy’ game. However, due to time and other players this is what gets played most regularly at home and this is a game I think will go down well with our regular groups. I shall be watching out for this on KickStarter!

Arkwright - My first true ‘heavy’ game of the con. This was a learning game for all four of us that played and we dived straight in with the Water Frame rules. I think this is a game that is quite easy to pick up after your first couple of rounds, but the strategy involved makes it much heavier. I came in a solid second place here despite not really working out what I was doing until a way into the game. Can’t wait to get this to our table soon!

Century: Spice Road - Friday morning a few of us had time to kill before scheduled games so we sat and learnt this. It’s being touted as a ‘Splendor killer’ but for me, I felt it was more like ‘Splendor Plus’. There’s a real engine building element to it that made it feel a lot more than just taking chips. This is actually having it’s soft launch at Expo this weekend and I will be grabbing a copy for sure.

Asbestos - This was a prototype from Larry and crew from The Boardgame Group. The theme and logic behind it are great - pay to protect your workers else they die, if workers die, demand for asbestos drops! Obviously it’s always great to catch up with the TBG guys too. Hopefully I’ll see an updated version of this at BGG Con later in the year.

Indonesia - Being one of the Splotter games I’ve never played I scheduled a game of this. We were lucky enough to play on a custom, large scale map. At 5 players this was tight and everything I have come to expect from a Splotter game. I made a mistake merging when I did which I think cost me the win. However, with two experienced players, the fact I was in with a chance at one point made me happy! This has been on my wish list for a while and I think it just bumped up higher.

Chicago Express - This was a surprise little filler game from Queen Games. Not a company you associate with track laying or shares in my opinion. We played this four players with two of us new to it. One I’d like to play again for sure so I’ll be looking out for it in the Expo bring and buy. Quick and easy to learn but as with most train games, a lot of underlying strategy especially for a sixty minute game. 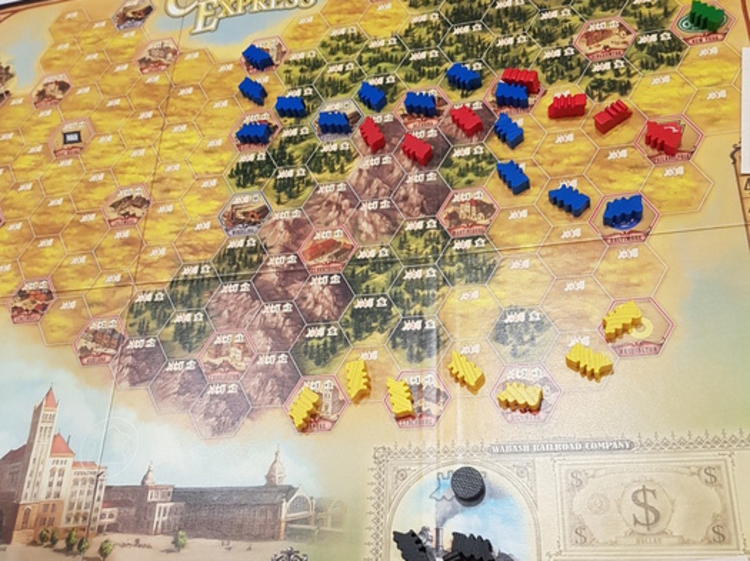 Wizard - In my defence, there may have been alcohol involved, but who doesn’t love a bit of trick taking? Especially when there’s a few sips of some fine whiskey involved! I love a quick little trick taker and this seems to be one of the originals so it was a great end to the day.

EXIT:The Game - The Secret Lab - We’ve done a physical Escape Room here in Brighton and had a lot of fun so I was intrigued by the concept of one in a box. We were up against the clock and three other teams. We started by being super gentle with things and ended up tearing and ripping pieces furiously! Our team was the fastest of the day but had penalties from using clues. This was great fun and I’ll be on the look out for the other titles in the range.

Lignum (second edition) - I jumped in on a game of this as it is one of many on my ‘shelf of shame’ Apart from a few new additions this plays the same as the first edition I own so was a great chance to learn it. This game is tight, running out of money on your first run round the board is harsh! Lesson learnt… being a lumberjack is not a profitable industry. I shall be packing this in my bag to take away and play again this weekend.

Kaivai - I knew nothing about this except that people with similar tastes to me wanted to play it so grabbed a game of it. A really pretty board with again, really tight game play (a bit of a theme at HeavyCon) Thematically this works really nicely with your fish spoiling and decreasing in value every turn. Tough decision making yet with only five options available makes this a really solid game.

The Climbers - After a very large dinner of all you can eat sushi a simpler title was perfect. Due a reprint soon, this little filler is one I have seen at multiple Cons but never had a chance to play. Great chunky pieces and great game play. At first look you assume it’s a simple game, but again it calls for a lot of tough decisions. I’ll be looking for the reprint when it comes out!

The Gallerist - Another that has been sat on my shelf of shame for too long! I played this with two other players who had only previously played it solo. This was everything I expected and more. We were regularly kicking each other out of spots so I can only imagine how harsh it will be with four players. This is for sure, one that needs multiple plays to master. 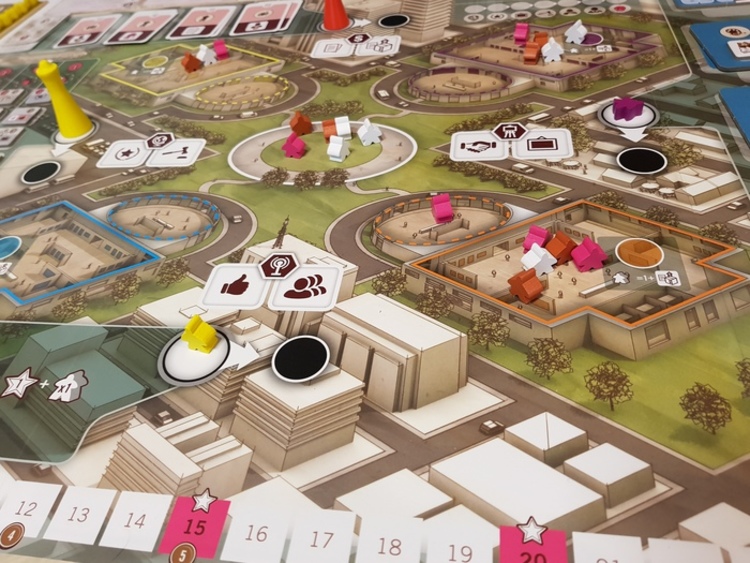 Lisboa - Due to be shipped to Kickstarter backers soon, this was a prototype we played. Not quite sure how I felt about the game overall as I had a great deal of the game were my actions were really limited due to the cards that were available. Lots of actions I wanted to take but I just never had the right resources to do so and no way to get the. Despite my reservations I won though! 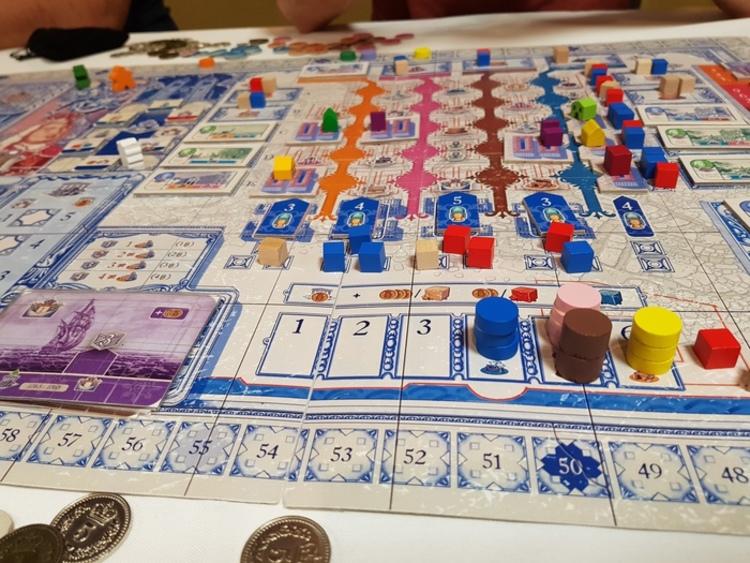 Deep Sea Adventure - A few of us were killing time Monday morning and just waiting to get to the airport so we pulled out a couple of fillers. I’ve talked about DSA before and always have it on hand at Cons as it’s the perfect size to carry and so much fun! As per usual, I pushed my luck too far and ended the game with almost nothing.

Avenue - This reminded me of a pocket sized Karuba. With similar game play but almost no set up or table space needed it has a definite advantage too. We had just finished scoring as the shuttle bus arrived to take us to the airport so had to run out the door on a win! There is a newer version Kokoro: Avenue of the Kodama available on KickStarter at the moment from the publishers of Kodama, so another one to look at!

I had an amazing weekend and mostly learnt games that have been on my shelf of shame or wish list for a while. I even managed to go the whole weekend without teaching anything which was a nice change for me! Thanks go out to everyone who taught me games over the weekend. As usual it was great to catch up with people I know in the US and meeting loads of new friends. Massive thanks to Edward, Amanda and everyone else who helped organise HeavyCon. Special thanks also go to Asher the greyhound for the fusses over the weekend that helped me not miss the cats quite so much.

Now, off to pack for UK Games Expo!