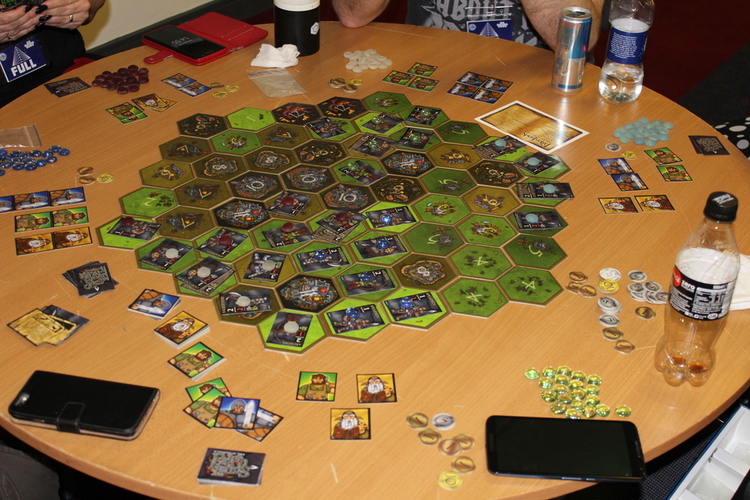 Another weekend, another early morning! This time it was a leave home at 6.30am to start the trip to Harrogate for Airecon at Harrogate International Centre. While this was Airecon 4 this was the first time it was a larger event so we wanted to make the trip and show some support!

The first part of our trip was not so bad, just over an hour to Bracknell, where we met up with a friend and all switched into his car. With the amount of stuff we were all bringing along it was a bit hairy if it would all fit, but I guess all those games of Patchwork paid off and we were soon underway for the long part of the journey.

As usual for any journey to a games Con, most of the conversation on the way was about the bargains we hoped to grab from the Bring and Buy or the newer releases we were after from traders.

We arrived at the venue at around 1 and unloaded our bring and buy boxes at the front door before parking up. As we approached the front desk we were asked if we were traders! (yes, we had that much stuff!) We got our passes and grabbed the all-important Airecon mug. This was a great idea! Just £6 got you your very own mug (complete with chalk!) and ensured all tea/coffee you bought over the weekend cost you just 50p a cup. As well as the obvious bonus of reducing waste all weekend, it felt very civilised to be drinking out of a proper mug rather than paper or plastic cups. We loved this idea! 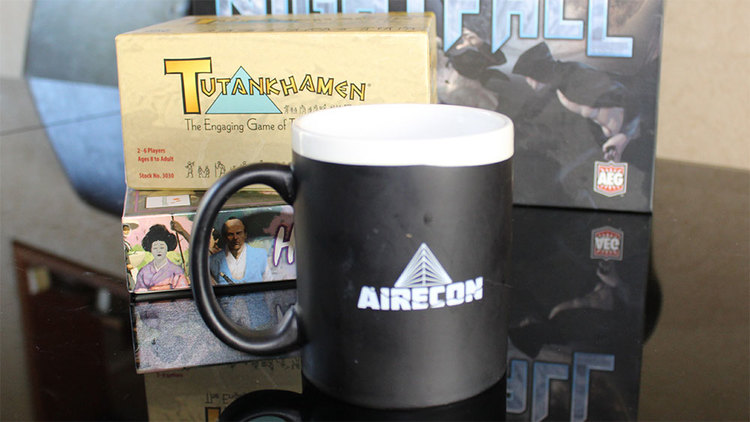 We grabbed our maps and programmes and headed straight off to the Bring and Buy to unload ourselves! Firstly, we needed to have a look and see if there were any bargains just waiting for us to arrive, sadly, at that point there wasn’t so we checked in. Despite the amount of stuff we had it was all incredibly smooth and the team there were great. Hopefully those boxes and bags of stuff will bring me in enough money for my air fare for Heavy Con! 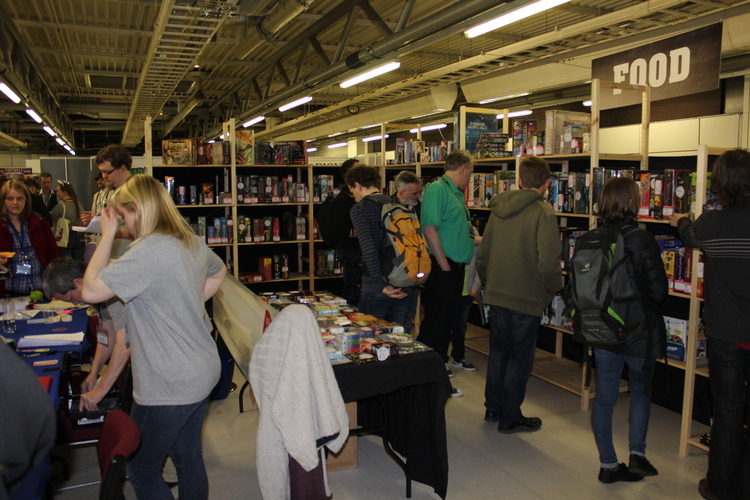 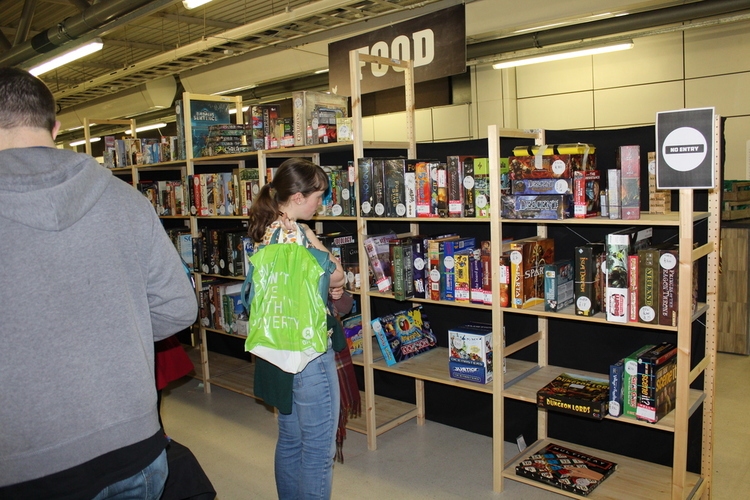 After that, it was time to get to some gaming so we sat down ready to start a game of Honshu. Of course, this was the point my local friends (who we would be staying with) showed up so I abandoned game to meet up with them!

We then sat down for some gaming, playing mostly little games before dinner in the hall which was pretty reasonably priced. At 8.30 it was time to head downstairs and join in the board game quiz. While we scored pretty well in a lot of categories, a few had us totally stumped! We failed horribly at the ‘CatchPhrase’ style round and the anagram round well and truly had us scratching our heads! We ended up coming in the middle ground somewhere which I think we were all happy with. After planning some games for Saturday we headed to our home for the weekend in Huddersfield (Thank you Ty!) where we played a couple more games over some tea and strategising for the ‘SuperBoard’ tournament the next day, playing our first games of Karuba in readiness for that.

Ty had previously won two hours VIP gaming on a Geeknson table so we were up early the next morning to get and enjoy that. Though we arrived later than planned, we got a couple of games in our allocated time slot.

We've got @IPlayRedGaming as one of our VIP competition winners here at @aireconuk playing a game of Lock&Key! #tabletop #gaming pic.twitter.com/Erq8DwKwQ6

Team talk done, we headed down for our tournament only to find that teams had dropped out, leaving numbers short. While this wasn’t too bad for some of the games, my allocated game ‘For Sale’ really suffers at the 3-player mark with six cards from each round not coming out. I had a dismal game and came in last, I was then more pleased to discover two of my other teammates had also come in last and Tony then spoilt our track record by winning his game of Splendor. 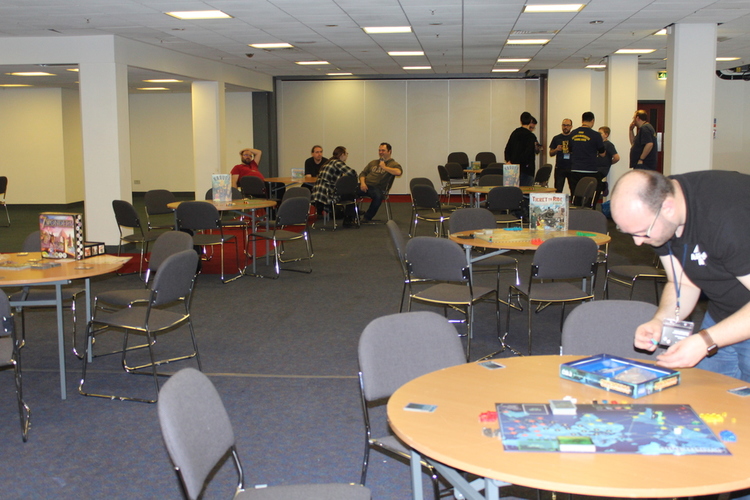 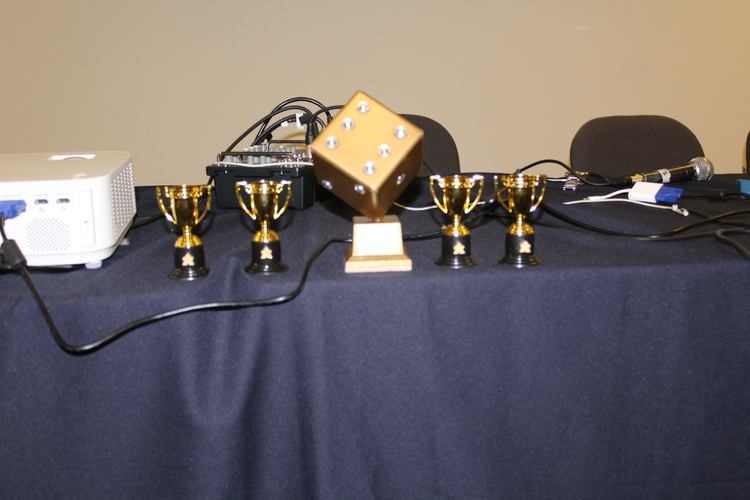 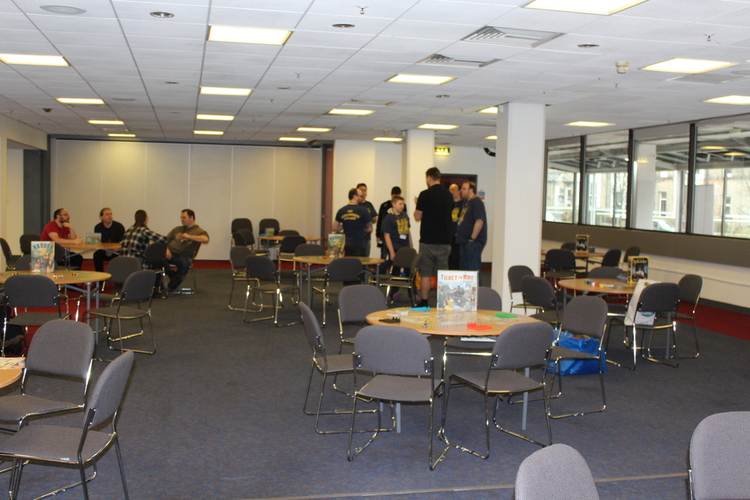 At least this meant we were knocked out and could do some fun gaming! We had a great five player game of Conquest of the Fallen Lands (a totally underrated game) After finishing that we had a wander round the trade hall, which wasn’t set up on Friday, checked out the Bring and Buy again then wandered off for dinner. The trade area was quite small but contained a lot of interesting things ranging from smaller, indie games including Alley Cat Games (Cauldron Master) and YAY Games (Ominoes) through to larger games retailers, artists and various accessory stands selling everything from dice rolls, card boxes through to wax melts with a Lovecraftian theme from Eldritch Essences! For a change this was a con where I was focused on playing games so I didn’t spend too much time at the stands.

Conquest of the Fallen Lands 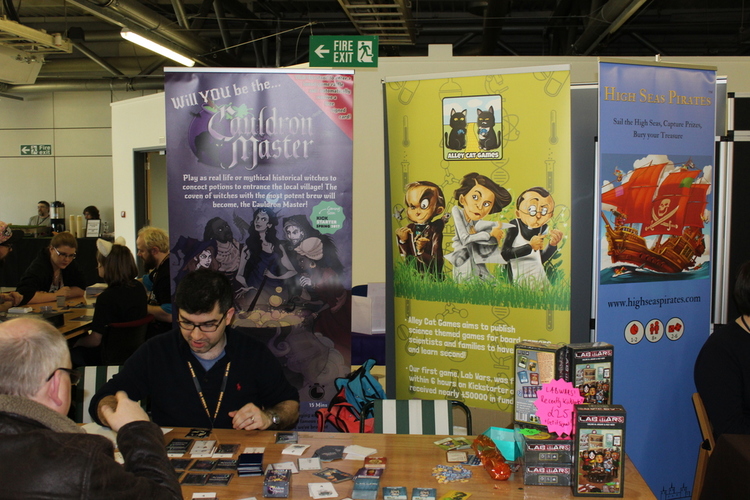 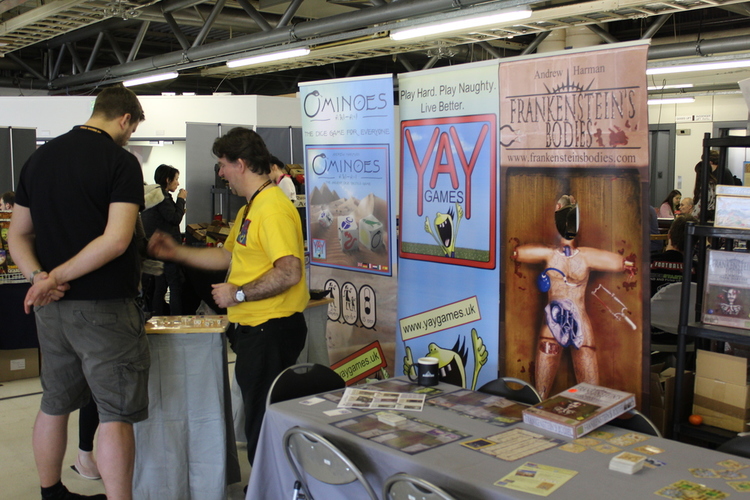 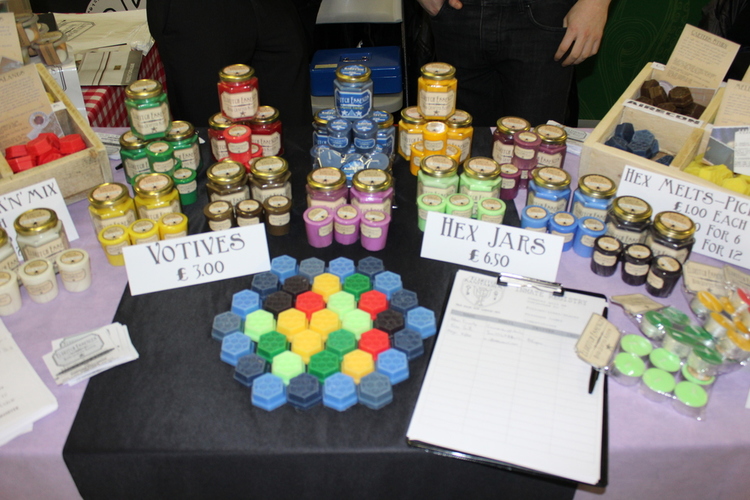 When we came back we had a game of Hansa Teutonica planned that we had scheduled previously for two of us, while Ty and Rob grabbed some games from the Travelling Man library to play. We were joined by a couple of very nice guys who were also looking for a ‘heavier’ game to play so I ended up learning HT in a five player game with four experienced players, which was tough but very satisfying. So, now I know how to play all I have to do is teach my gaming group so my copy can get some plays! After that we had a fun game of Deep Sea Adventure (always a favourite!) We also scheduled a game of Zhanguo for the next morning.

Back to Huddersfield as it was getting late where we chatted about the day over tea and biscuits and started packing as Sunday would be the last day - boo :(

Packing the car with our goodies on Sunday morning was fun as I’m sure it should have been far emptier and we were all hoping we had nothing left to bring back from the Bring and Buy!

We met up with our new friends from Hansa Teutonica and started Zhanguo at around 11am, this is another game that has been sat unplayed on our shelves for far too long. What a great game, if a little brain melting! I came in a respectable second for my first ever play and after a few hours needed something a little ‘lighter’ to play. We then found the IQ Gaming ‘family’ room at the back that we had previously missed and had a quick game of 7 wonders whilst waiting for their giant Ticket to Ride to become available. As soon as it was, we jumped on that which was great fun. They also had a giant Pandemic available to play, diseases also come super sized! We then finished the weekend by playing one of the bargains I had acquired over the weekend - Tutankhamen, a great little Reiner Knizia I’d picked up for only £3 and would accommodate everyone we had. 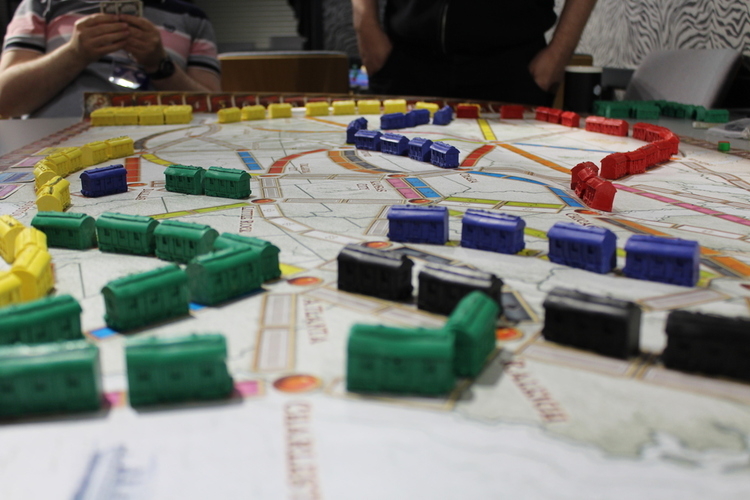 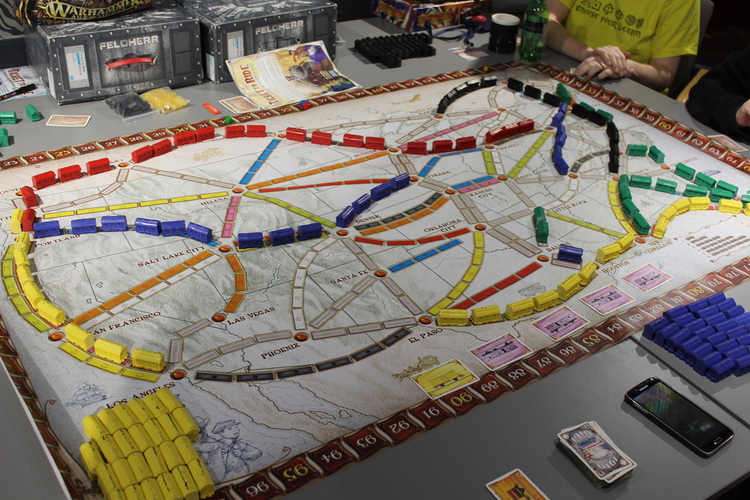 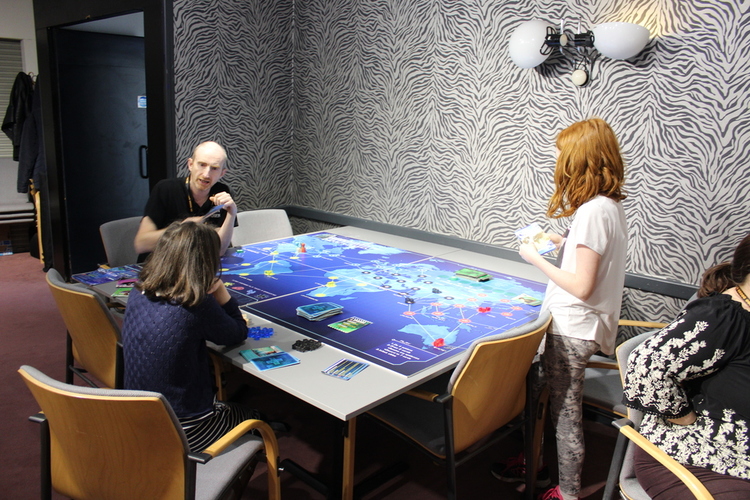 After that is was sadly time to head home as we had a long drive ahead of us! We said our good byes and started on our way. We picked our car up from Bracknell and arrived back home finally at around 1.30 in the morning.

All in all we had a great time, played some good games, old and new and caught up with friends, again, old and new! Got rid of some old games and bought some new games!

Airecon was a nice convention, this time with nearly 700 unique attendees. I’m already looking forward to next year and seeing it go from strength to strength! 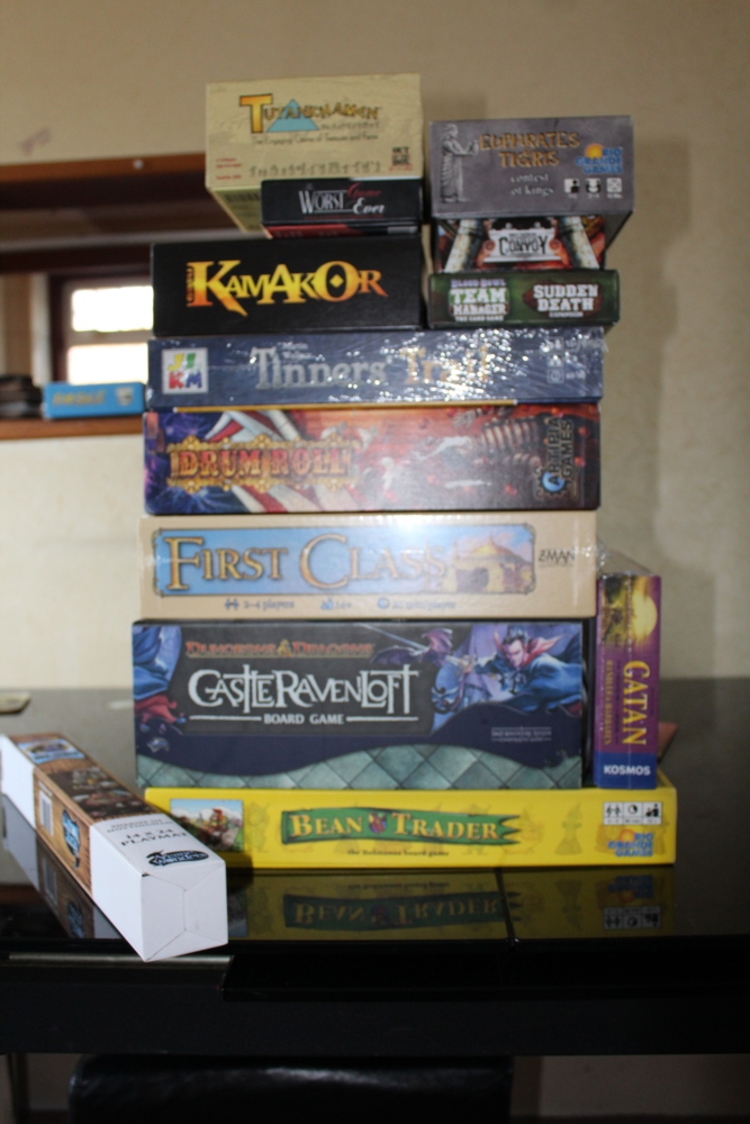