Imagine our delight, when two days before our trip to Copenhagen, we find out about The Bastard Cafe, right in the centre of town. On their site they say 'Bastard Café is a café for board games, card games, coffee and 'hygge' in Copenhagen' (Hygge is a concept of warmth and coziness) Open until midnight Mon - Thurs and 2am on weekends.

Obviously, our first evening in town involved a trip straight there!

Set in Huset-KBH (a community art centre) the first thing that grabs you is the sense of space, every time we visited (which was quite a few over our five day trip!) there were people playing yet the space never felt cramped or loud. 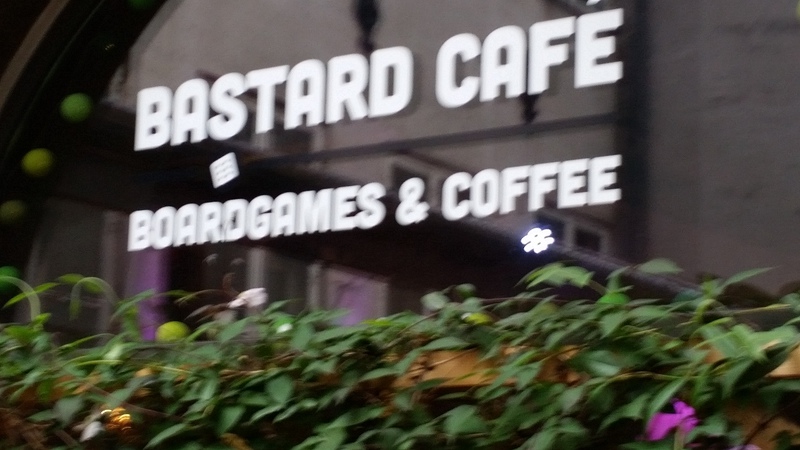 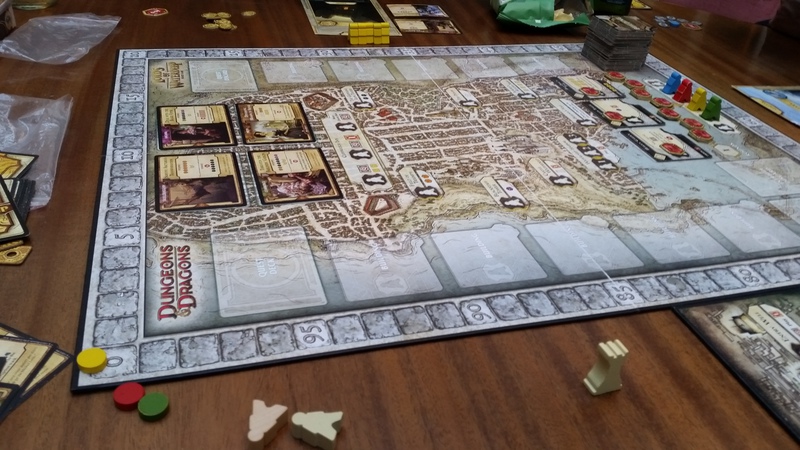 Our first evening (Thursday) we were just totally overwhelmed by the huge choice of games on offer (over 800 titles, old and new) and while stood at the shelves umming and arring started chatting to a couple of locals who invited us to sit down and play something with them. It turned out that he was originally from the US and she was originally from Sweden so we had a truly cosmopolitan game happening! We sat down with a few drinks and had a great game of Lords of Waterdeep with them (which I barely won by a single point!)

There is a huge range of 'top titles' you can play for free or else pay a cover charge of 25DKK per person (around £2.50) being that we could tell we would like the place I opted for a full years membership at a very reasonable 125DKK (£12.50) This not only means I can take a guest for free at any time but in any games that you tie for victory, membership cards are used to determine an overall winner (lowest membership number wins!)

As you walk in the cafe there is a table for the resident 'game geeks', these guys are on hand to teach you a new game, help you pick something you might like. (Many thanks to Jakob who taught us Targi, a game that has been on my 'to try' list for a while!)

The food and drink was quite pricey for us, but pretty reasonable for Copenhagen (around 50DKK/£5 for a beer, 150DKK/£15 for a bottle of house wine).

Friday we had other plans for the day so didn't make it back until Saturday (which we had been warned got quite busy) so we hopped over there late afternoon and sampled some of the food we had been eyeing up previously. Again, compared to the UK prices were high, but pretty standard for Copenhagen. We ordered a plate of nachos to share which came smothered in cheese and jalapenos and with generous portions of sour cream, salsa and guacamole, delicious and very filling! 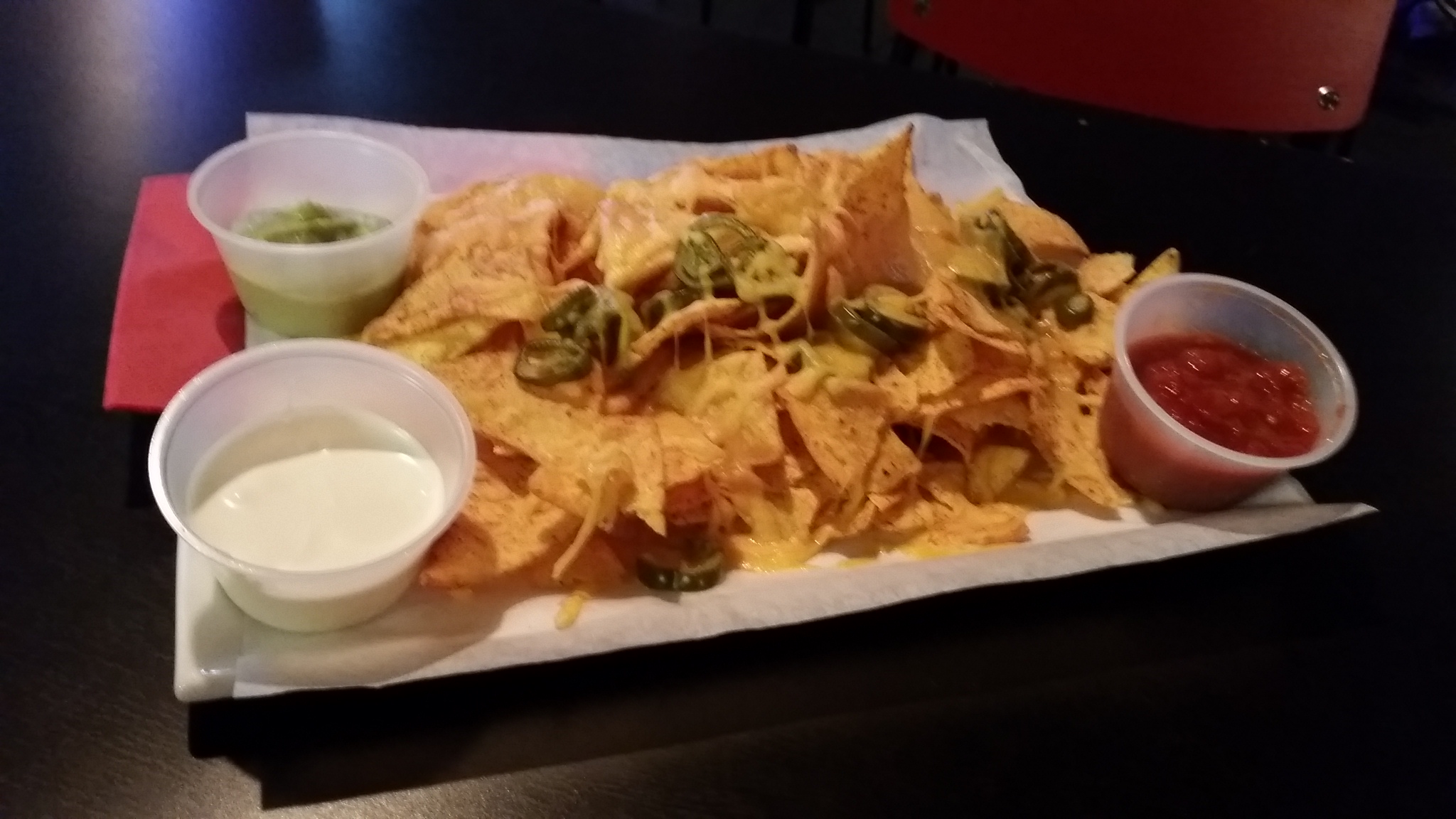 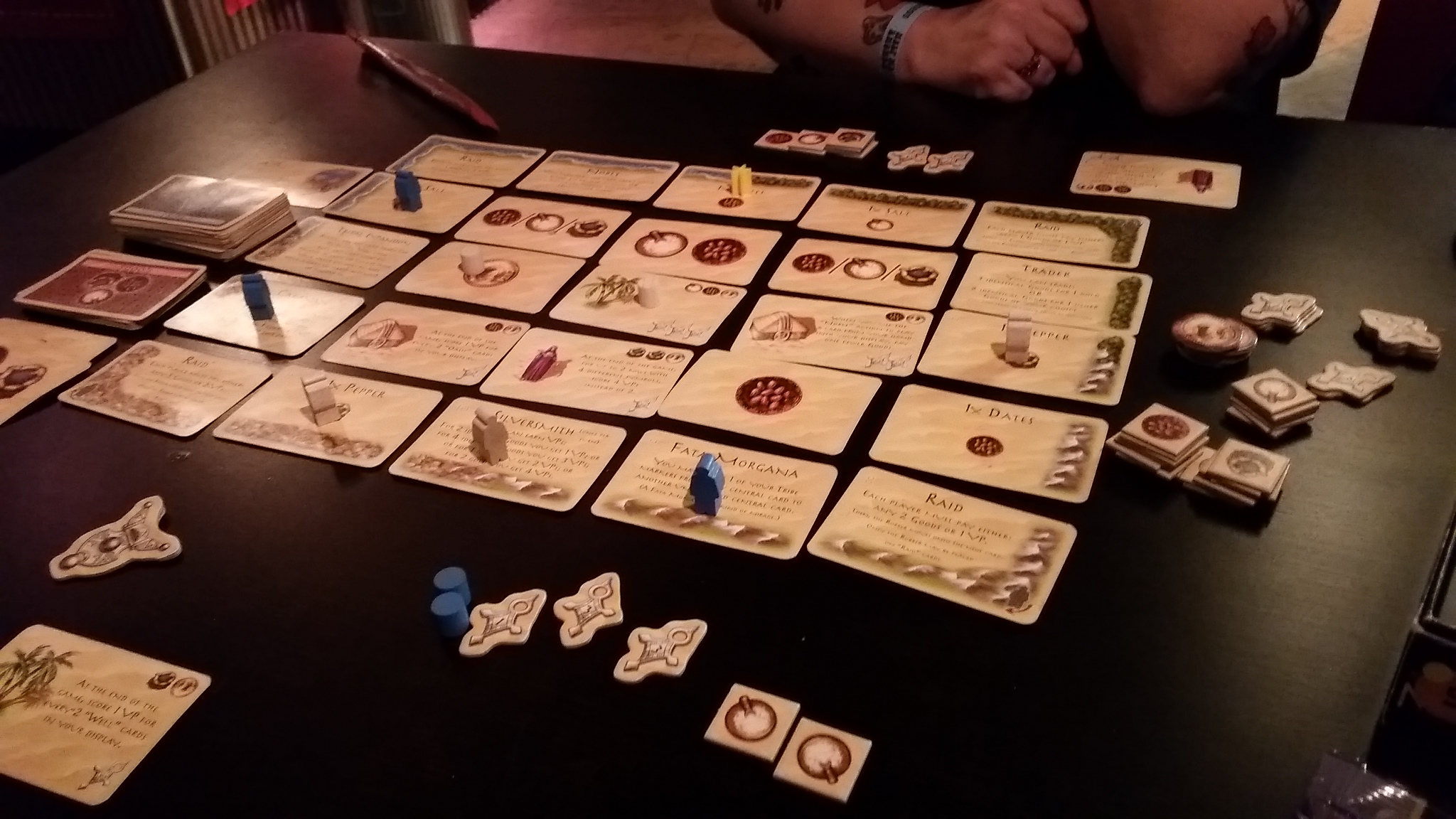 On the walls they have 'colour diplomas', as they were starting out they sold the 'rights' to use specific colour pieces for any game. Wish I had known about this as I would have snapped up the red one without a moments hesitation!

Another great perk of membership is 10% discount in some of the local games stores, so obviously I had to go on a hunt for a boardgame bargain! Here is where we made a BIG mistake by discovering the most amazing Faraos Cigarer Aps. They have three stores, one for comic books and related stuff (figureines, etc), there is also a LARP, costuming shop and then the board games store *hallelujah* Initially you walk in and see the floor to ceiling shelving, alongside a wall of dice. Like a kid in a candy store I was scanning it all, then I discovered the back room! This place is what dieing and going to heaven must feel like. ALL of the games! So much stuff that is out of print and impossible to get here, in fact, just so much stuff. Some of the prices were well above what they would be here, yet some of the rarer games were priced very reasonably. I did well to resist and walked out only with a copy of Lanterns (if only we had taken a bigger suitcase!) 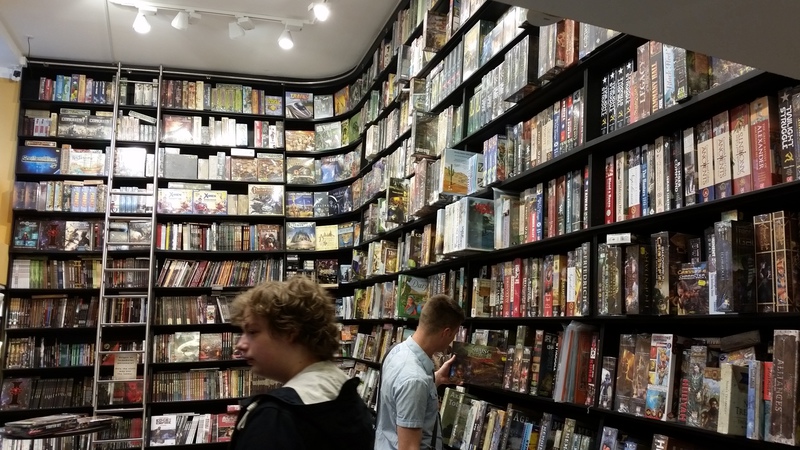 Walking round the corner we then discovered Games!, which while it had a lot of chess boards in the window also had a huge wall of board games, sadly, it was closed on Sunday so we made a point to go visit it on Monday. While a lot of the store is taken up with very nice looking backgammon, chess sets, cards etc their board game selection was also pretty impressive. They also had a lovely wooden D6 as their door handle.

All in all, Copenhagen made for a perfect city break for a pair of gamers. It was really nice to have somewhere to sit down and relax after walking round admiring the rest of the city during the day! 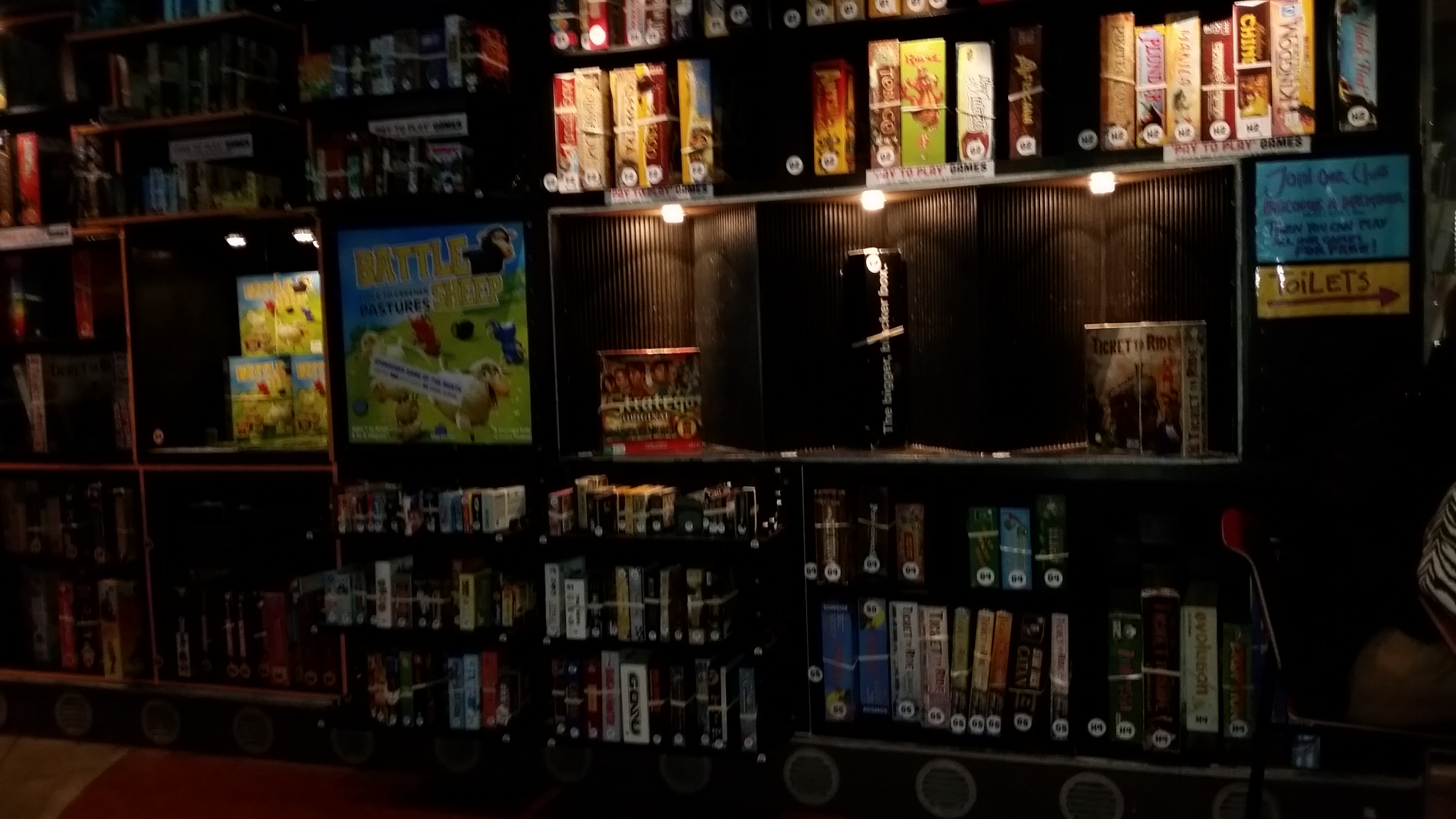 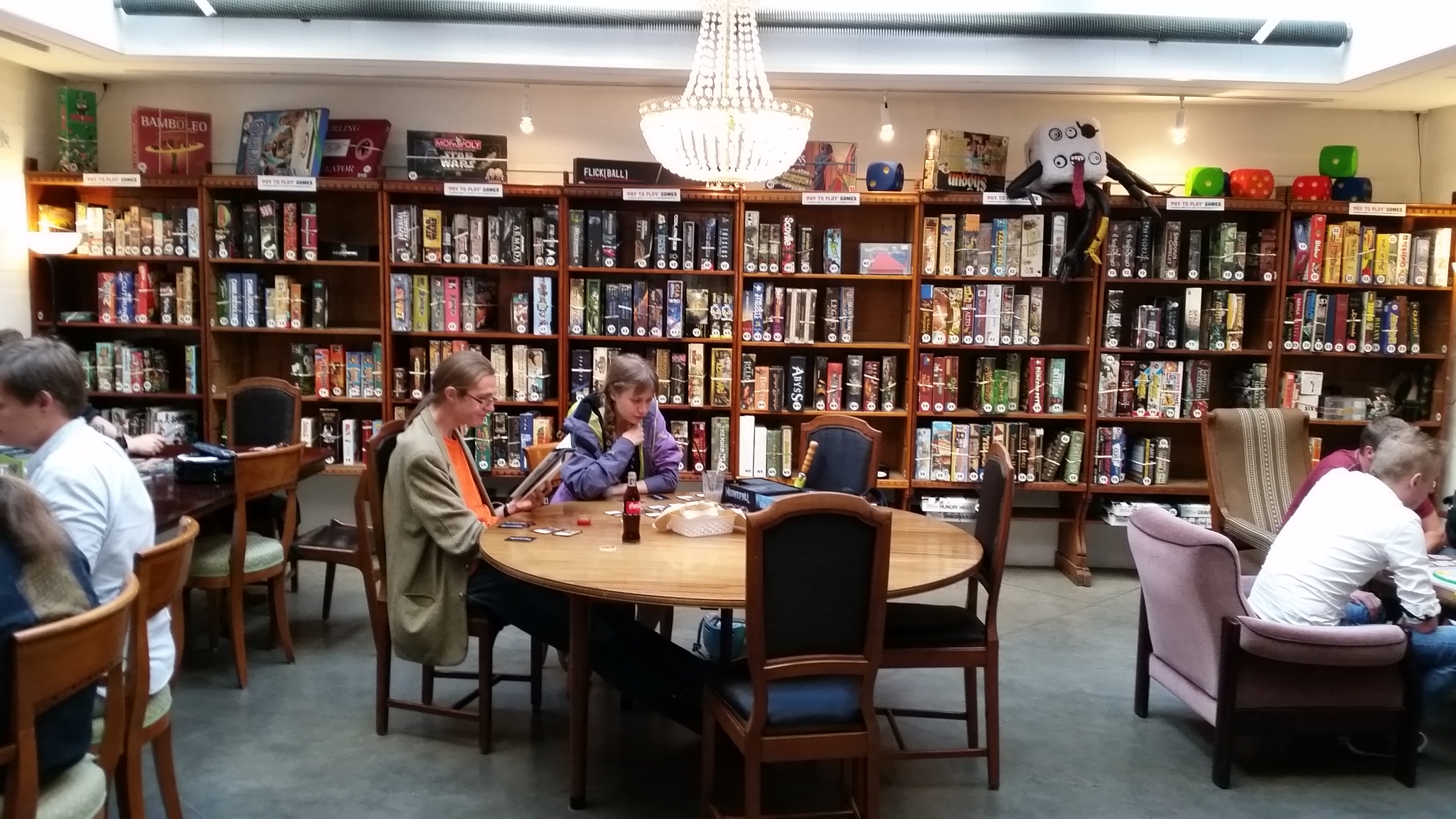