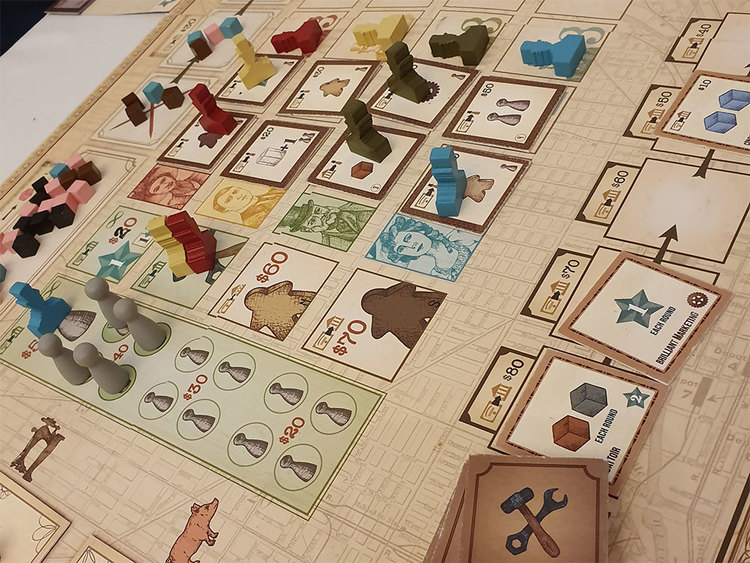 Wednesday 22nd May, I got up at an unholy hour to make my way to the airport. I was off to HeavyCon V, this time it was in the more convenient (for me!) location of Boston which meant a seven-hour flight rather than the thirteen hour one I had endured for HeavyCon III!

I landed at lunchtime and jumped a cab to the historic town of Salem (taking a risk, I know!) After a brief visit to the Witch Museum we had a wander around the town and went past the Witch House, the last structure standing with direct links to the infamous Salem Witch Trials. It was owned by Jonathon Corwin, a local politician and one of the judges who presided over the trials. 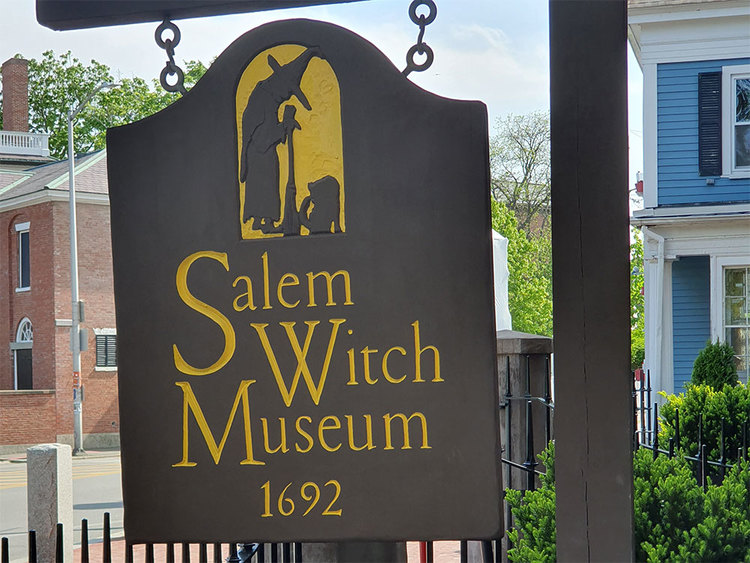 At this point, the group separated into two groups - one that wanted to carry on walking around the town and one group that decided ice cream and cocktails were in order. Do I need to say that the home-made ice cream was delicious? We then wandered over to the Bit Bar, a retro arcade and pinball bar with all the old favourites and some excellent themed cocktails!

We then met up and a group of around 23 of us went for an amazing dinner at Turners Seafood, the food was amazing, the vibe was great (if a little loud!) and the staff were super helpful dealing with such a crowd! After that, it was finally back to the hotel to check in, help set things up for the next day and crash.

I woke up stupidly early, excited for a weekend of brain-melting games and headed downstairs, at 9am the room was already buzzing with a lot of games on the go. I grabbed my goody bag, filled my gorgeous HeavyCon mug up with coffee and dived into the rest of my bag. Every attendee got a copy of Warsaw: City of Ruins from North Star Games. I then scored big with my ticket games which were Trade on the Tigris and Food Chain Magnate. Unsurprisingly, I already own FCM so I posted it on the whiteboard to trade, excited to see what offers came in, but nervous about luggage space as I only had hand luggage for this trip! 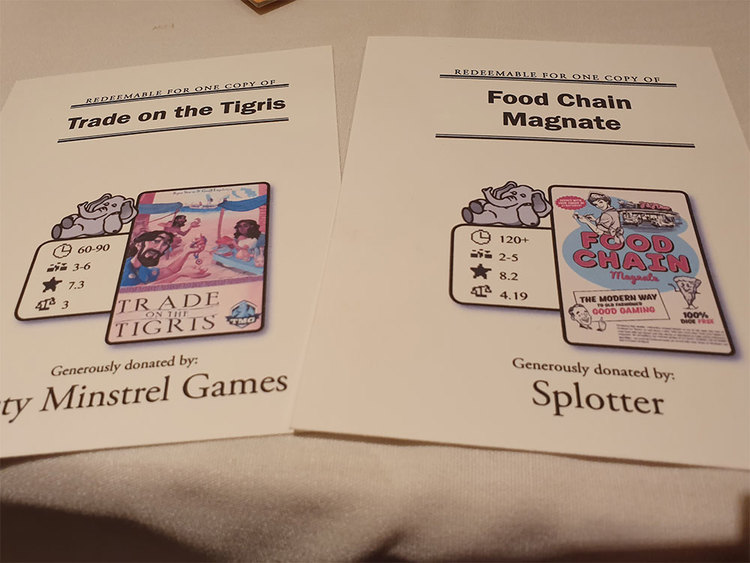 My first game of the Con was Princes of the Renaissance. This comes with two confessions - firstly, I thought I had an unplayed copy of this, turns out I have Princes of Florence and got confused! Secondly, we played this quite wrong! However, this area influence, bidding game seemed to set the scene for a lot more bidding/auction games I ended up playing over the weekend. Although this was ‘the wrong game’ played incorrectly, it was a great start to the weekend! 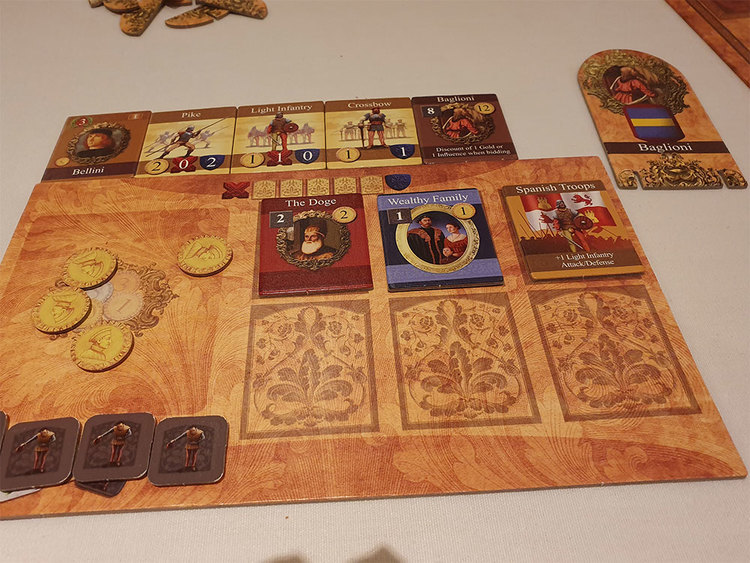 I then went straight into a game of Three Kingdoms Redux. Obviously, this has been on my radar for years, but the three player limit means there’s never been the right occasion to play it. When the rules explanation started, I thought it would be too ‘war gamey’ for my tastes, but actually, this economic, worker placement hit all the sweet spots for me! Now, we need to find a single friend to play it with.

I then jumped into a game of Ginkgopolis. Honestly, this just didn’t ‘click’ with me. The rules and gameplay ended up feeling clunky and much slower than they should have been for the weight of game this is. Other players loved it, but this really wasn’t for me. That’s fine though, as there’s plenty more games on the shelves! 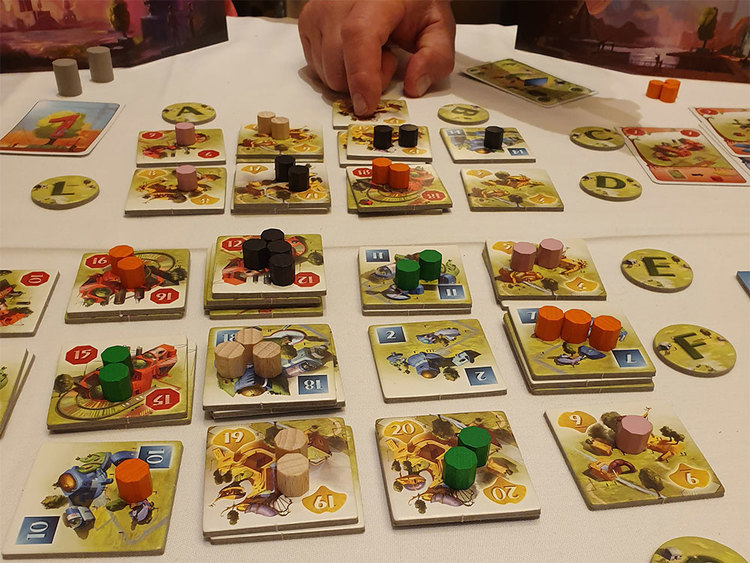 I then managed to get in on some games I actually knew! I jumped in on a game of Pixie Queen that was being set up. This is such a great game that’s not talked about enough! It’s a worker placement/resource management game that you spend the entirety of being punished by the Queen. The trick is to be punished less than the other players. A deceptively chunky game considering it has cute pixie meeples. 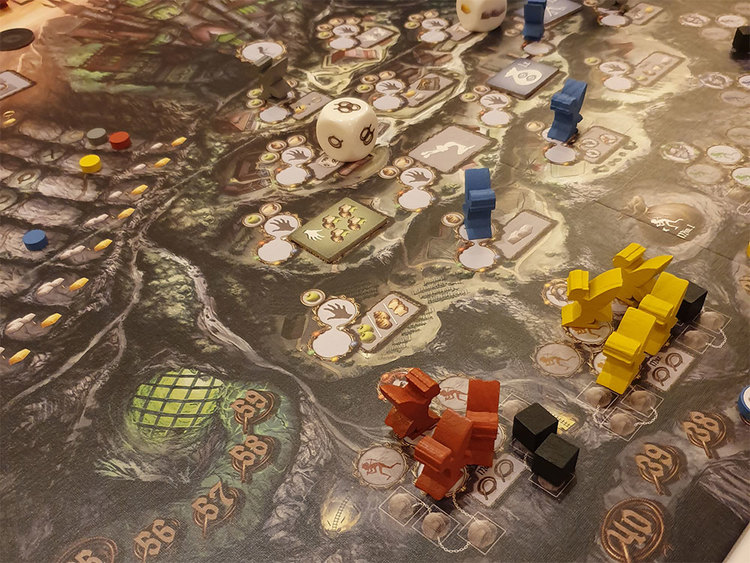 Then onto another chunky Euro that I love - ZhanGuo from Whats Your Game? This makes Rob's head hurt (a lot!) so doesn’t make it to the table often enough so I jumped on the chance to play it again. So much to do and not enough time with other players actions determining if you get bonus actions or not. Sorry Rob, this needs to come out more often! 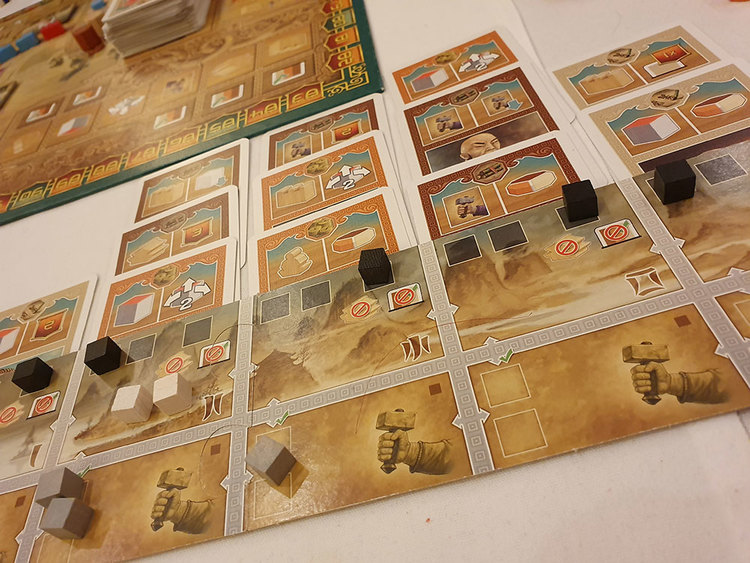 Five games in a day - pretty good going for HeavyCon! Off to bed ready for day two

So, we started with what turned out to be the longest game I played all weekend! Celestia with a mammoth six players (four of whom hadn’t played before!) Yet again, Mindclash Games have hit it out the park in terms of production quality and super theming everything. There’s a lot to this game, especially when each pair of players has to learn the way their specific characters play. Not sure I’d want to play it at six again unless everyone was sure about what they were doing, but very much looking forward to playing it at four. 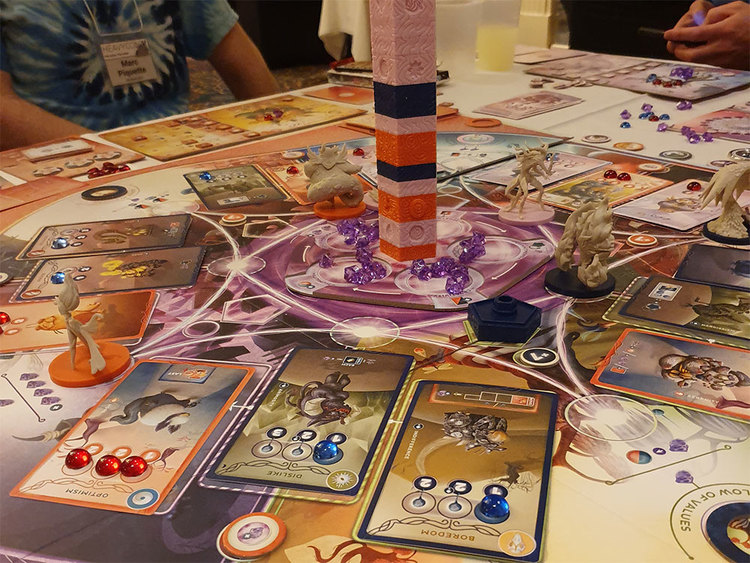 After we had finished that we didn’t have long until the group meal so we started a game of Raccoon Tycoon. Damn, I love this game! Stocks, a fluctuating market and auctions, all presented in a super accessible and super cute way. It’s always a pleasure to introduce new people to this.

Then, onto dinner! What an amazing spread! All hundred of us piled into the grand ballroom and sat down for a classic New England feast including locally caught steamers and mussels, homemade clam chowder, various salads, buttermilk cheese biscuits along with a whole lobster each. I did try the lobster but ended up mostly pigging out on the biscuits and the amazing variety of salads. 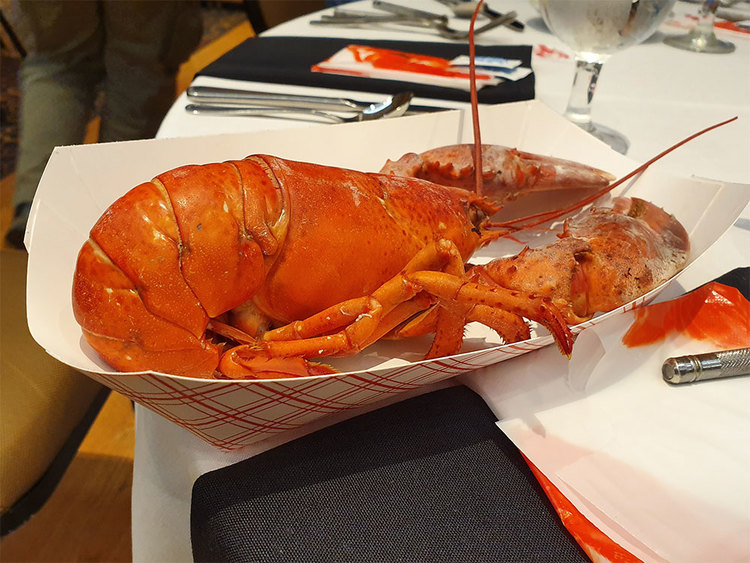 This was quite easily the best food I have ever had at a con! After food, coffee and dessert we all headed back to the main room for the door prizes give away. I ended up trading my FCM for a copy of Eminent Domain plus expansions (that all stacked nicely into the main box!)

Then we moved onto one of the hyped games of the weekend, Escape Plan. Having not been out long there was still a lot of buzz about it. I find Vital Lacerda pretty hit or miss, I love Gallerist but really didn’t get on with Lisboa so was interested to see if I’d be gutted I missed the Kickstarter for this one. I actually enjoyed the theme on this, it managed to mesh well with gameplay without being too distracting. I did like it, however, the stupidly high production quality means it comes with a hefty price tag - would I pay that price tag for the gameplay? No. It was fun and I managed to escape, but don’t have FOMO from this one!

Saturday morning I woke up and managed to jump straight into a game of Great Western Trail complete with Rails to the North expansion which I’d only managed to play once before. This is a great game and the expansion adds a tonne of new options so it was nice to play with that and have some idea of what I was doing. 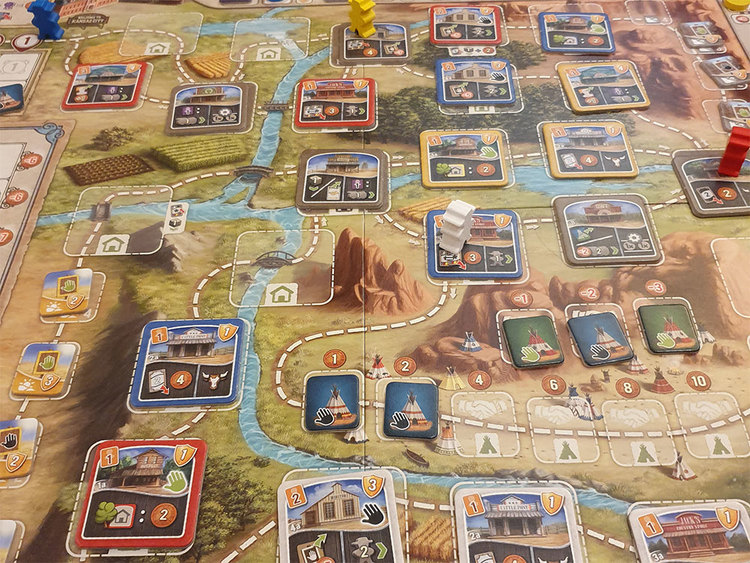 I then jumped straight into a game of Gaia Project. I'm a big fan of Terra Mystica so have been wanting to play this for a while. There are enough similarities to give you a feel of what you’re doing if you’ve played one of these games. I’m not a huge fan of ‘space games’ and definitely prefer the fantasy theme of Terra Mystica. While I enjoyed the game, the plastic pieces were a massive turn off for me and I’m happy to stick with my elves, dwarves, and witches! 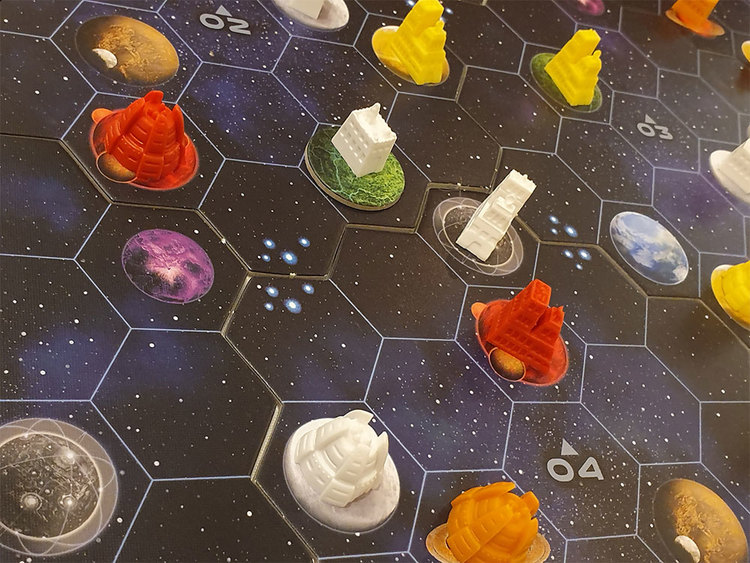 Next, I finally got to try a full game of The Estates. Such a clever game. It reminds me a lot of The Climbers, very simple, yet highly strategic. A closed economy game with bidding? Madness I tell you! But it works! Definitely one that benefits from a few plays to get a real idea of what your best plays are at any given time. 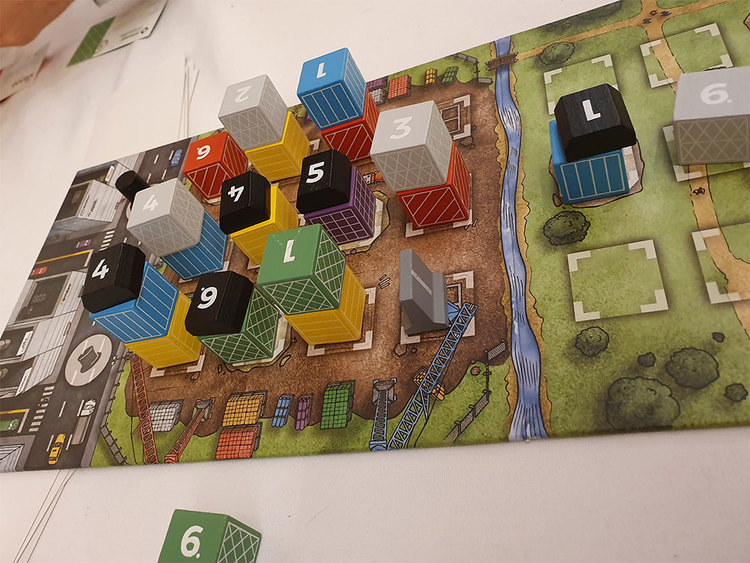 As a perfect follow up, I then played Container. Rules simple, yet again, strategy heavy. Such an elegant game! Just five actions you can choose from, yet, every choice seems tough. Again, more bidding (seemed to be a theme for the weekend!) but at least this was an open economy! The jumbo edition is awesome and if nothing else, it’s satisfying to move the huge behemoth ships around the table. Another great game that I feel I will play much better second time around! 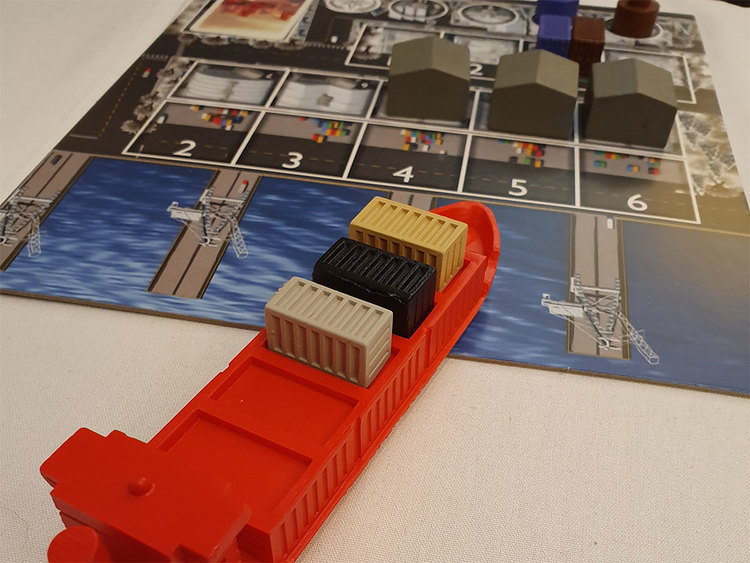 Going into the evening I played Blackout: Hong Kong. Alexander Pfister is definitely my designer of choice at the moment and, despite the bad graphic choices in this game that everyone talks about, Blackout didn’t disappoint. While elements of the card play are very similar to Mombasa, there is far more of a ‘puzzle’ element to this. I also think the theme and artwork will be easier for some people to get into rather than Mombasa which can be quite daunting. 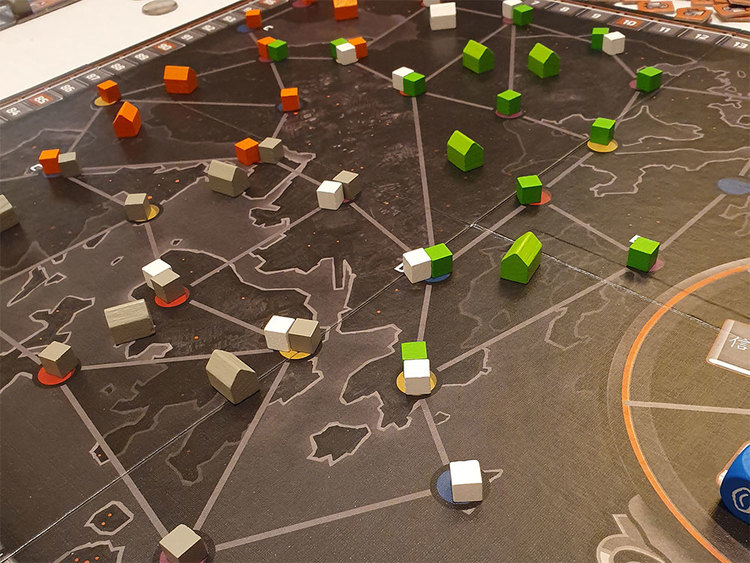 Early to bed as tomorrow was my last day and the day I flew back home (albeit on the red eye!) and I still had to work out if everything would squeeze into my hand luggage!

I had managed to pre-organise the one game I had to play over the weekend for Sunday morning. So, after successfully managing to pack everything, I headed downstairs for a game of City of Big Shoulders. I heard about this a couple of years ago and was immediately excited when I heard ‘18XX with worker placement’, I’ve been following it for a while and it was an instaback on Kickstarter for me. I’m also excited to be getting the opportunity to demo it for Parallel Games at GenCon so really wanted to get a game in before then.

Not a lot I can say except I certainly wasn’t disappointed! It certainly scratches both those itches and a lot more - I am excited to be able to show it off to people and can’t wait to get my Kickstarter version in the near future.

Unsurprisingly, that had taken up a large chunk of the day and then left me with the ‘I don’t want to get too involved in anything’ time phase before my flight. So, a Ganz Schon Clever (I love this!) followed by a quick game of Ra before I left the hotel. 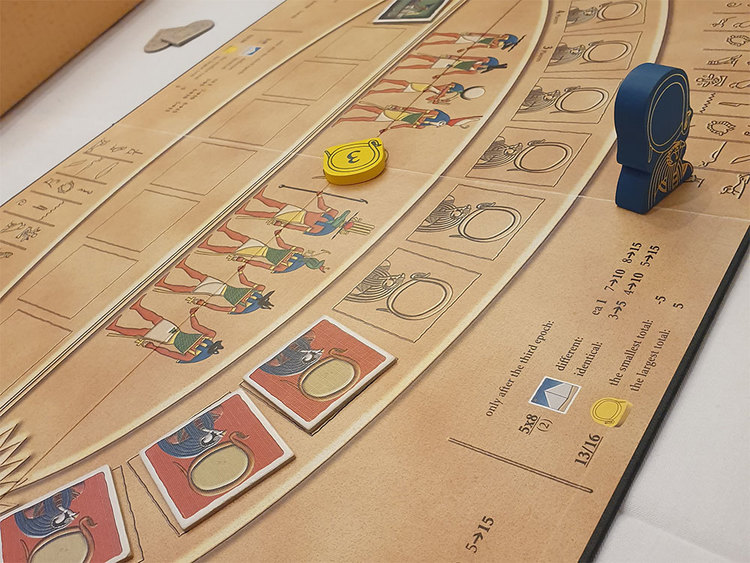 An overnight flight on Sunday got me back home Monday lunchtime, with a couple of days rest before heading off to UK Games Expo Thursday morning!

I love the feel of HeavyCon, because it is a smaller scale, there is a really friendly feel that makes the weekend great. Every day there were snacks at 2pm including luxury smores, complete with flames to toast your marshmallows, cinema style popcorn with candy and a good supply of free tea and coffee (all had in my shiny new HeavyCon mug obviously!) Massive thank you to Edward and Jess for organising it all, can’t wait for next year!