Posted on January 08, 2018 by Katrina Demeanour 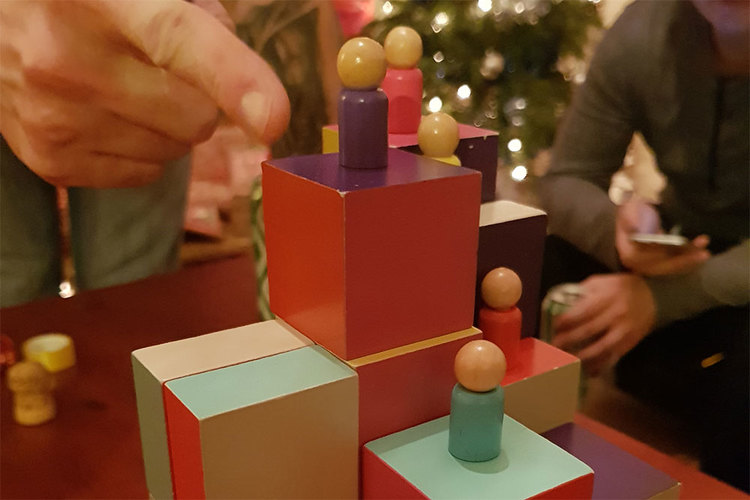 So, we all think over the holiday we’ll get a load of gaming done, but I bet a lot of us end up playing Monopoly with the family instead!

We started early this year with a trip to see The Last Jedi, followed by some games at a friends house. This was a group of people we have only just started introducing to games so we took round The Climbers and Wits and Wagers. The Climbers is a 3D strategy game. 35 coloured, wooden blocks are placed randomly and players take it, in turn, to move blocks and climb up the tower. You can only move onto blocks that are your colour or grey (neutral) and you have a couple of ladders that will help you up, but they are single use. As usual, we all had fun with this, the chunky blocks and colours make it a beautifully tactile game that anyone will enjoy whilst having a surprising amount of strategy. Wits and Wagers was a new one for us but a lot of fun, and one that came out a few times over the holidays! Everyone is asked the same trivia question, the answer to which is always a number. Players write their answer down on their player board and all are placed face up on the table. Everyone has two betting chips - one for $100 and one for $200. The winning player is the one closest to the answer without going over so place your chips on who you think was right. The winner wins one chip and anyone betting on them gets either one or two chips. This is a great game that everyone can get involved in, even if you have no idea of the answer, you can easily win the game with good bets!

Both hubby and I had time off over Christmas and New Year so we vowed to hit the ‘Shelf of shame’. I got Navigador as a gift from my Heavy Cardboard Secret Santa and couldn’t wait to get it to the table, we are huge fans of Concordia and this is from the same designer, Mac Gerdts. This felt like it had much harder decisions to be made than Concordia (maybe due to our play count!) The player action choice is on a rondel and any action three or fewer spaces in front of you are free, you may take other actions but they come with heavy penalties. Actions include gaining workers, ships, sailing, discovering new colonies and selling goods. We really enjoyed this but need to get it back to the table soon to fully grasp the strategy in it, as a first, two-player game I felt we were putting off the end game condition so we were ready, but not sure how ready we’ll ever be for final scoring!

Fantahzee was a very cheap, impulse buy on my part. Yahtzee was one of the games I played as a child with my Grandma so I’ve always had a soft spot for it. I expected this dungeon crawler/tableau builder/Yahtzee cross over to be OK at best, but we actually had a lot of fun with it! Place heroes in front of you and use your dice rolls to activate them to then go kick butt in the dungeon row. Some enemies have counterstrike, so will attack back though so make sure you have enough shields to protect your heroes. If the monster next to the villages isn’t defeated he will attack and leave you with negative points. This was a really pleasant surprise of a game that I can see us having a lot of fun with.

I recently picked up Yamatai, second hand at a bargain price. I’d been looking at it a while but been warned that it was quite ‘lightweight’, I have to say it was a pleasant surprise and the action combination with player order was a nice element. If you take first player, you get the lowest value boat for free and no extra action, if you choose last place you get three boats. Boats of the same colour must be placed next to each other and islands you visit may either be built on (if they are empty) or the resources from them gathered. These resources may be used to buy specialists at the end of the turn, each of which grants a unique ability. No, this isn’t a heavy game but I can see our group enjoying it as an evening game that still has a decent amount of thought required! 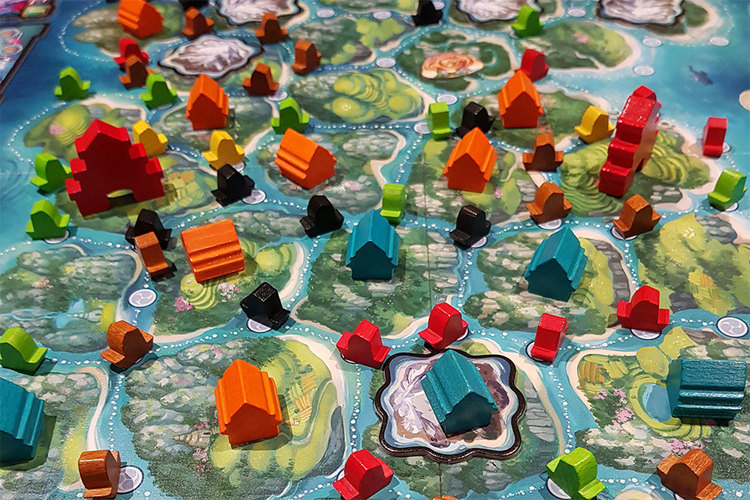 We don’t often play as just two players (if we do, it tends to be learning a game to then teach other people!) so I was a bit nervous about Trambahn. Rob picked this one up as it is from one of the Russian Railroads designers. It definitely has a 18XX feel to it despite it being such a quick game. You place one or two passengers in the middle and place carriages into your tableau. You also buy engines that act as multipliers for your carriage score. When a fourth passenger of a specific colour is played, you score your carriages of that colour. You also get an extra scoring round if you get eight carriages of one colour. Not easy considering the numbers only go from one to ten and must always be played in ascending order. Ten main scoring rounds and the game ends. This plays out pretty quickly and we have since picked it back up a few times, whilst waiting for people to come round on game night.

I love Arkwright, so Gentes, also from Stefan Risthaus, was a must buy for me this year! It’s very hard to say much about a game like this after just one play. Each player has a board that shows the number of workers of each type they own and a time track on the top. This determines how many actions you will get each round. Most actions require you to take a tile and then take time tiles for performing that action. Each tile takes up a space on your track. Tiles with two hour glasses aren’t immediately removed at the end of the round, instead, they are turned over to their other side with one hour glass, and then removed the following round. This is fine, but in a game that only has six rounds, each and every action needs to count! You can build cities which give you additional bonuses, buy cards, train workers (which you will need to play cards). All this seems so tough to get done in the available amount of actions. This is one we need to get back on the table as soon as possible, partly so we remember the iconography and partly as it’s one of those games you walk away from thinking ‘if only I’d done that or that instead’! 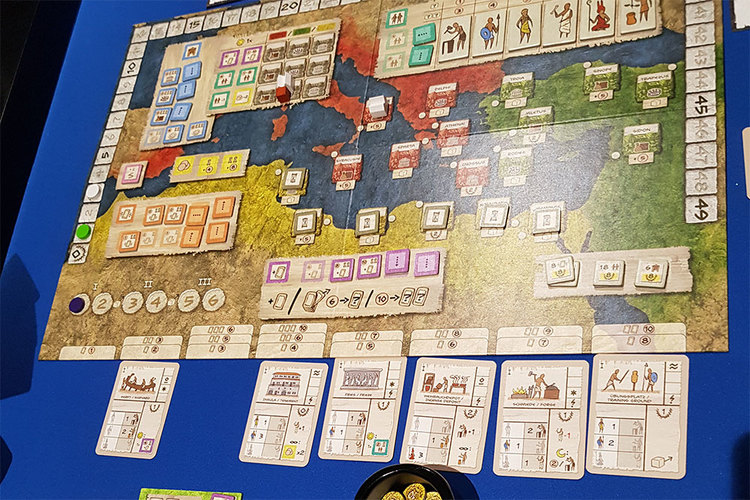 So, we made a small dent in the shelf of shame! Other things we played were:

Photosynthesis We taught a friend of ours this and while it feels harsh at any player count, three definitely felt a little friendlier than four players!

Hansa Teutonica is a great game that doesn’t get enough play here so we jumped on the chance to play a new map we hadn’t seen before! To place in Wales or Scotland you must have control in Carlisle, Cardiff or London. This is another game that comes across as quite mean at times and the battles for some of those cities was intense. As per usual with HT I thought I was doing quite well until final scoring - this is a game I will eventually master, honest.

Lorenzo Il Magnifico - We really haven’t played this enough! Great worker placement with a lot of tough choices to be had. This was my third game and I finally felt I was on top of everything that needed to be done. This is another game that never seems long enough to do what you want. We own the expansion but every game of this someone has been learning so we haven’t had a play yet. Soon, I promise! 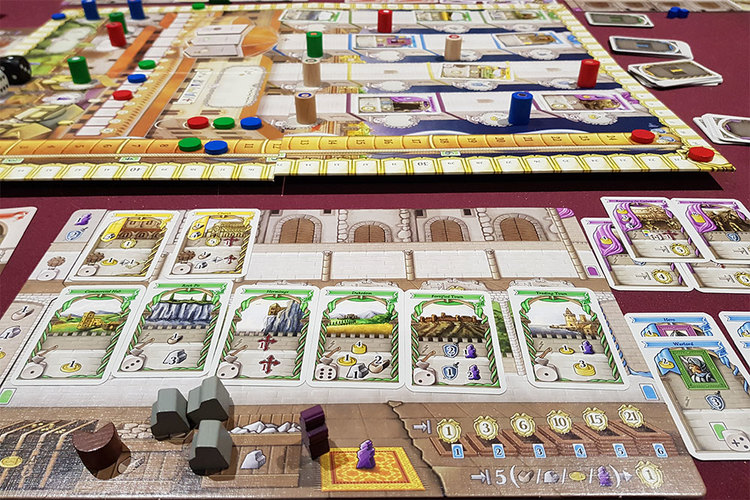 Between this lot and some fun games like Codenames and Custom Heroes, we got a bit of everything in, some old, some new. Now onwards into 2018s challenges!