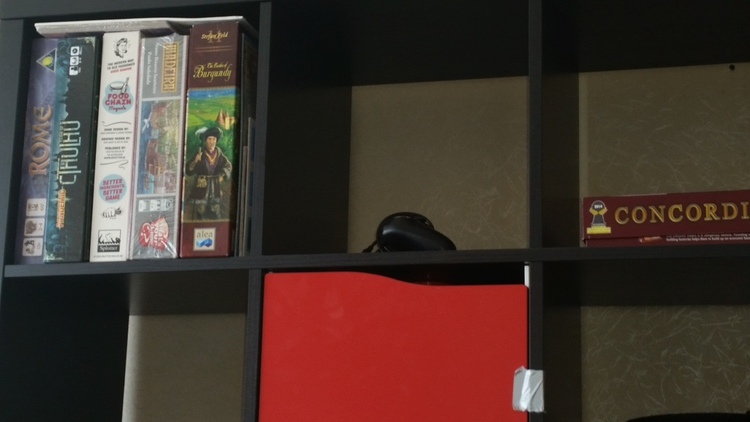 I've been quiet of late - I know! So much going on in life that even finding time and energy to play games has been tough.

Part of this has been down to the home renovations we have had done. We had a solid two weeks of builders, dust, dirt and plaster everywhere in our home. This meant, of course, that the precious things needed to leave the house. Much easier said than done when your gaming collection takes up half your living room and half the spare bedroom! So, with the electricians due to arrive at 8am Tuesday morning we booked a storage unit and proceeded to load the car with games from all four of the full Kallax units.

After a few lectures about safe driving, which were the precious games, not to stack games too high etc etc hubby set off with car load number one.

As any gamer will understand, you can't possibly deal with the thought of having no games at all in the house so we decided to keep one 'cubes' worth. So, with so many games to choose from, how to do you go about whittling that down to five or six MUST haves? How do you choose which you want to keep? Will the other games get jealous? What if no one else wants to play the few games you have left in the house?

OK, calm down, think about this logically! Four/five players tends to be our sweet spot and they are typically players that like the heavier end of games, but will we want to play heavier games in the midst of the building madness?

The very precious and unopened Food Chain Magnate cannot leave the house. I was lucky enough to win a copy of Pandemic Cthulhu at UK Games Expo in May and a lot of people are keen to play that ahead of it's release so that should stay. Two down already! Concordia is a game loved by a lot of our game group and goes up to five players, so again it needs to stay. We should also use this opportunity to help me reduce the 'Unplayed Games List' (see here: 2016 challenge ) so Madeira and Rome:Rise to Power stay. Now I feel just one more for luck. Castles of Burgundy is great at 2, 3 and 4 player counts and doesn't see enough love so that's last on the list!

(Our Concordia box contains all the expansions so doesn't do well on it's side. Going flat also didn't count towards my 'one cubes worth'.)

So, while we knew it wouldn't be easy living in a building site I don't think either of us had quite anticipated the mayhem that we would be living amidst. We had kept our gaming table but were now sitting on collapsable garden furniture rather than our comfy, padded usual chairs, we had to clean inches of dust off the table before we could use it and quite often we were playing by lamp light as the overhead lighting was being worked on. But carry on playing we did, despite much of our house looking like this: 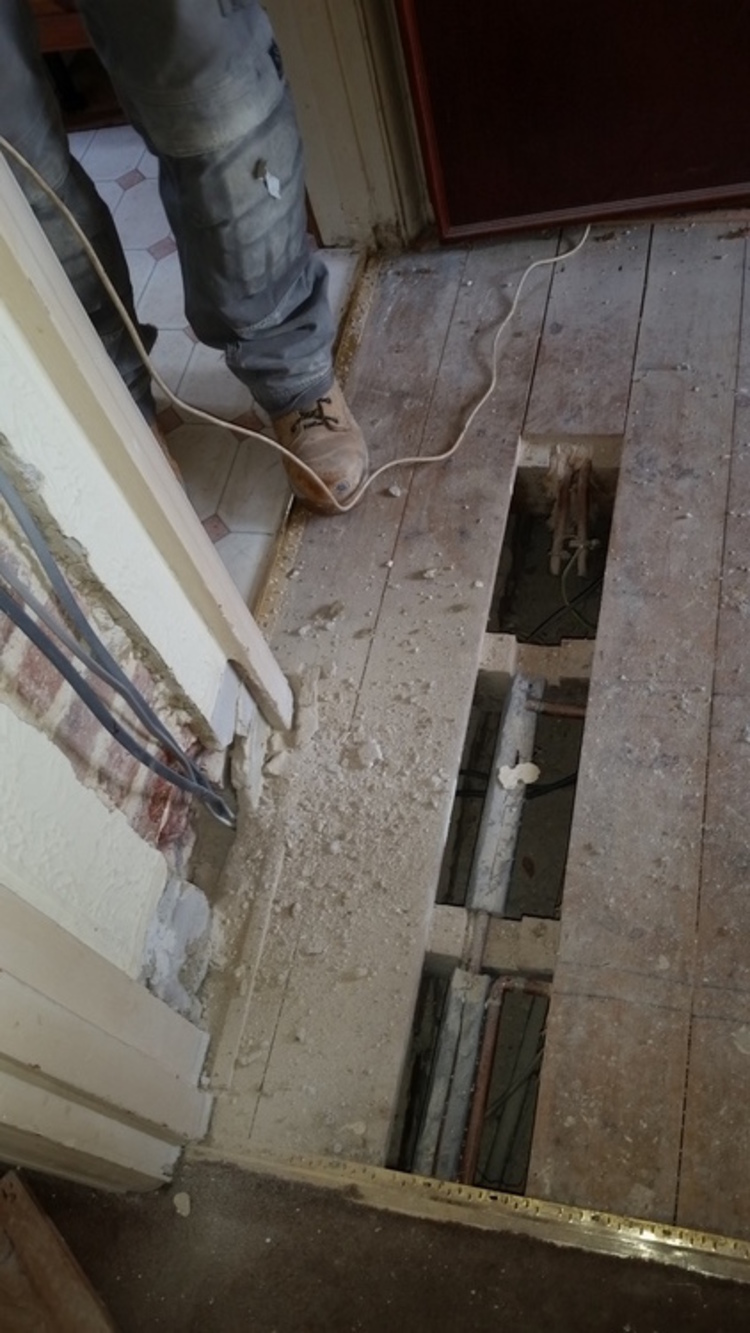 We did, of course visit friends for gaming and our local games cafe to have a brief respite from the works. The minute the new lighting above our table was fitted it made all the stress worthwhile. I don't think any of us realised how much we had struggled to read cards and boards before.

After two and a half weeks, the messy work was done and it was time to bring the babies back home at last. Three cars later and a four person chain gang and they were all finally back inside the house. Then began the task of getting them back on the shelves! Now, I'm sure we'll all admit to a bit of 'overflow' but I'm pretty sure all those games came off those shelves so why, oh why do they not fit back in it?

Got them all back in? Have you looked over there, on the table? 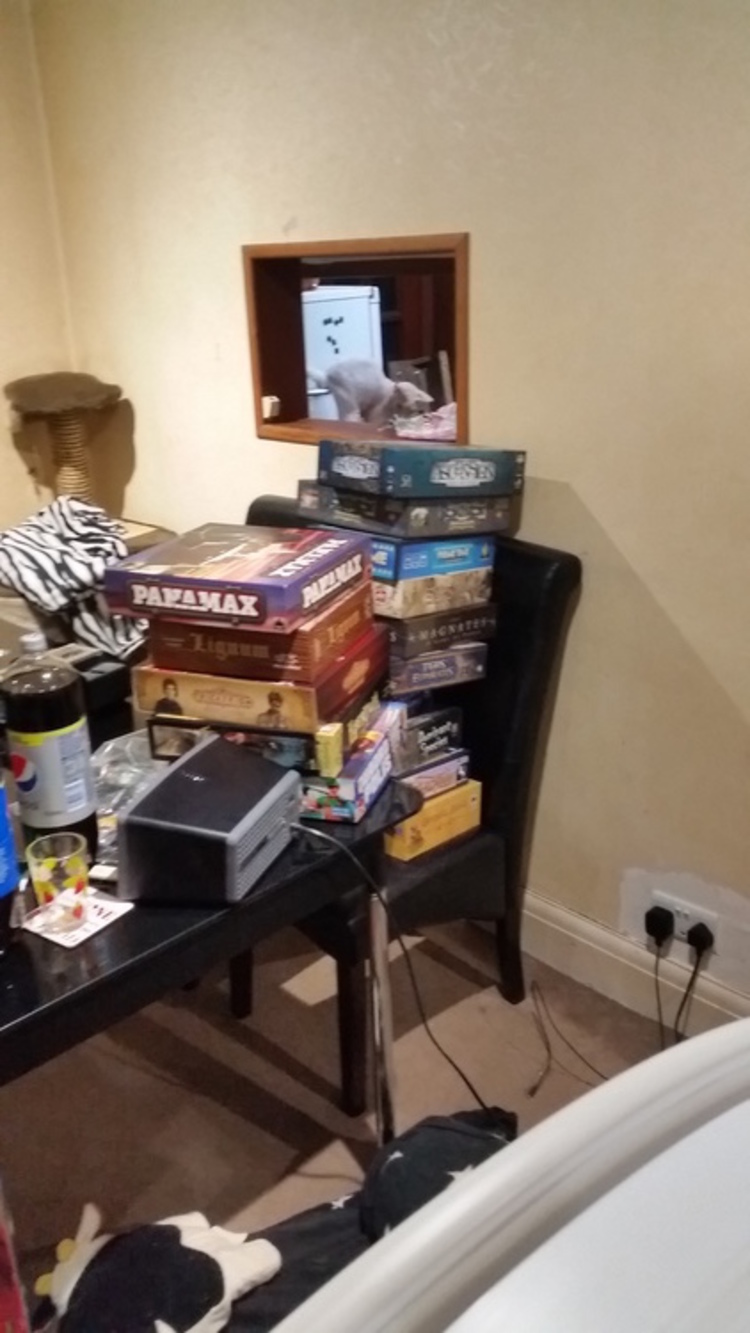 aarrrrggghhhh... this is like some abstract game in it's own right now, piles of games in every corner of the room that just won't fit anywhere! At this point, our two little red cupboard doors get removed and the two cubes worth of 'small games' are removed to make more room. At this point everything just about fits as the small games are relegated to a storage box in the corner of the room! 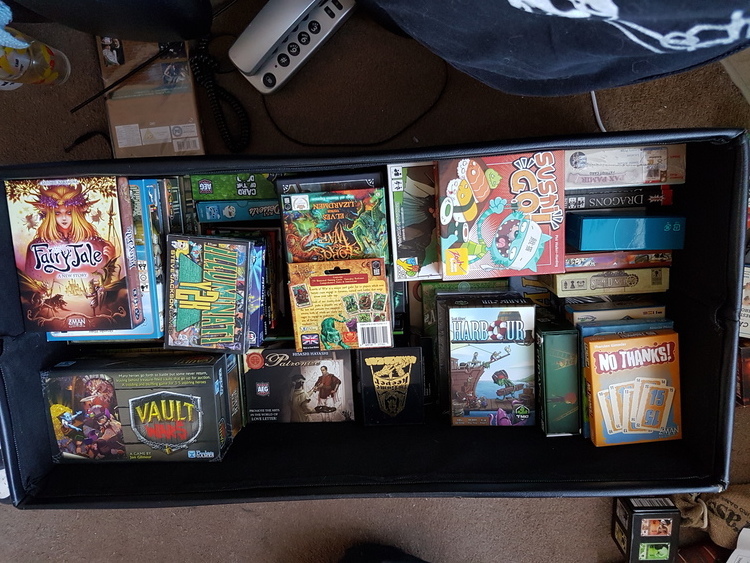 Now, everything fits nicely, though it's strange that things aren't where you aren't used to them being, but it fits, hooray!

Next morning, the doorbell rings and stood on the doorstep is the postman with a box in his hand, smiling as he hands me a Kickstarter game I'd forgotten was due to arrive. He looks confused as I break down and cry......